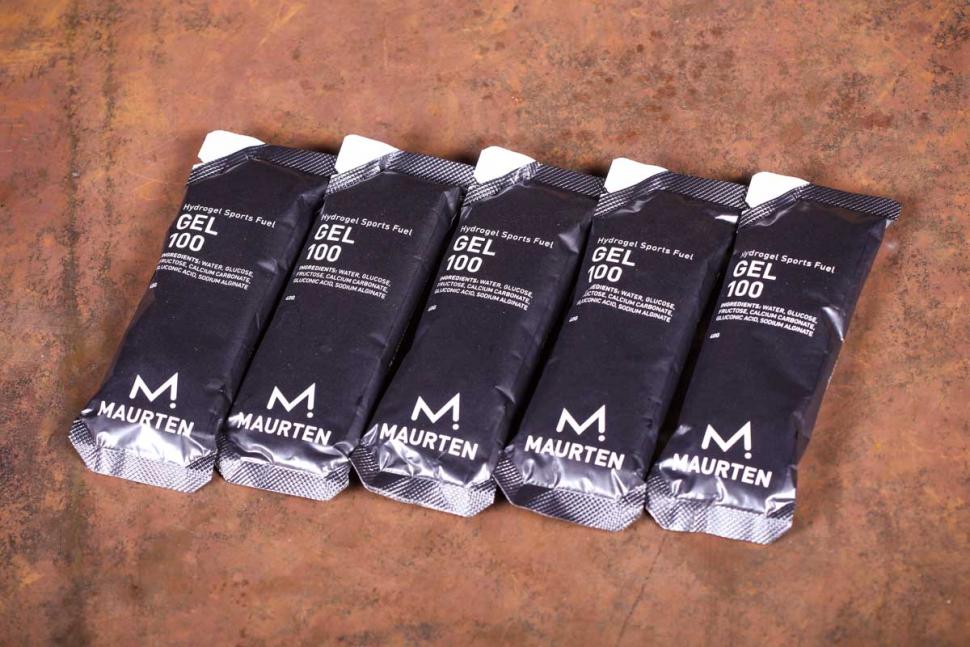 6
10
Seems like a very powerful product if taken the 'correct' way, but when used as any other gel doesn't offer much extra
Weight:
480g
Contact:
info@avalanchesportsmarketing.co.uk
How we test

Maurten's Gel100 is an energy gel with a twist – you're able to take four of them in an hour without gastric upset or 'wasted' energy – giving you a whopping 100g carb in one hour.

Maurten first came to our attention with its drink mix, which I reviewed back in the summer. The concept behind the drink mix was that each serve contains 80g carb – double what most drinks provide – and that the hydrogel formulation that informs it means that all 80g of these sugars will be easily digested by the body.

With 90g being acknowledged as the upper limit of carbohydrate that we can digest per hour, and it also being recognised that for some, this can cause GI distress, the drink was quite revolutionary.

So, the brand has now taken that hydrogel technology and put it into a gel form, and taken it a step further. Maurten claims that the glucose to fructose ratio of 0.8:1 – the only product on the market that has this ratio – enables you to absorb a slightly mind-boggling 100g carb per hour.

Like the drink mix, the ingredients list is short and doesn't include any colourants or flavourings – which is quite reassuring given how many gels contain ingredients lists with more words you can't pronounce than a Japanese dictionary.

When looking at one gel in isolation, you get 100 calories, and 25g carbohydrate per hit, which is very much on a par for the energy gel market. The gels are the typical size of a normal gel, and weigh in at 40g, which is somewhere between the pocket weight of the dense, almost chewy gels like Clif or Gu, and larger more water-based products such as SiS or High5.

In the mouth, they're quite different to most products on the market, and that's a result of the unique 'hydrogel' from which it's made. Probably the easiest way of describing it would be like a really runny jelly. It can be a little tough to swallow whole; first time round I took it all into my mouth at once and swallowed it in two or three hits over the course of 30 seconds or so. It is possible to swallow it whole, but it is more of a definite swallowing action – like you would with food rather than the way in which a lot of gels just slip down the throat without you thinking about it.

The taste is very neutral; it's sweet, a bit like honey or maple, but you'd probably mostly say it tastes of nothing.

I tested the gels twice, once during a long five-hour mostly easy ride with a few intervals at the end of it, and a shorter 90-minute tear jerking interval session. I wanted to try the gels to see just how my body and stomach reacted in both circumstances, taking four gels in an hour (the maximum suggested by the manufacturer, as that's all that can be absorbed) during the intervals, and then taking just a few gels in the final hours of the long ride – as I might do with any other gel.

> How to eat right for sportives or long rides

During the long ride I fuelled more or less as I usually would, with a few bars early in the ride, then a couple of the Maurten gels towards the end, and I finished feeling reasonable enough – as good as you can after five hours of pedalling at least! The gels deliver the same amount of carbohydrate as the Clif or Gu gels that I usually use, and served as a direct replacement of my usual product. When taken as you would any other gel (not taking four in an hour), like I did on that ride, I didn't notice any different effect on my energy levels to when taking any other gel on the market. I felt the energy spike soon enough, but nothing out of the ordinary.

However, during the shorter, more intense session, I really noticed what Maurten can do for you. The whole selling point of the gels are that you can take so many, and I gave it a go. Four gels in an hour felt like a lot – but it also didn't leave me feeling disgusting, as you may expect. The beauty of the relatively neutral flavour is that it goes down easily and doesn't linger on the palette. Taking lots of one strongly flavoured gel can leave you feeling a bit overpowered by flavour and sweetness, but not so with Maurten. And there was no sense of bloating or sickness.

The performance impact felt notable – with 100g carbohydrate flooding my system in the space of an hour, I couldn't really be any more fuelled, and sometimes, if you throw enough at that metaphorical wall, something sticks. During that hour I did two efforts of around 20 minutes, both more or less full gas, and on both I hit power numbers that I typically only see in the height of summer when at my best.

Again, with nutrition you have to take things with a little bit of a pinch of salt – how far can you isolate the impact of the nutrition from all the other things that may be having a part to play in your ride? In this case, however, I would find it hard to believe that having a monstrous amount of fast release carbohydrate flooding my muscles didn't do very good things for me.

One small niggle with the gel is the packet itself, notably the opening method. The tear-off tab is quite small and just takes up the corner of the packet – meaning that only a small opening is created. This makes it quite difficult to squeeze out all of the product inside. It's a small gripe, but annoying.

Price-wise, the gel costs a lot – at £2.75 a pop, each individual gel is around £1 more than most on the market, for example the well-reviewed Torq guarana gel. That said, some gels do breach the £2 mark, though it's a rarity – with these Etixx gels being one example.

Overall, I'd say that this is a gel for a special occasion, maybe the big race or sportive you've been working towards all year. To really reap the benefits of the Gel100, and make it earn its premium pricing, you need to use it as it's intended, that is, taking four of them an hour. When doing this, they feel really effective. If taken at a rate of one or two an hour, as you might any other gel, they don't offer much over a normal gel.

So, save 'em for your Sunday best. The rest of the time, save your pennies.

Seems like a very powerful product if taken the 'correct' way, but when used as any other gel doesn't offer much extra

These gels are aimed at those wanting to maximise performance, perhaps in their goal event of the year or a race. It enables your body to absorb up 100g carbohydrate per hour, which surpasses the maximum previously believed to be possible (c.90g per hour).

The GEL100 is a biopolymer matrix, filled with a unique blend of fructose and glucose (ratio of 0.8:1) which enables uptakes of up to 100 grams of carbohydrates per hour.

The GEL100 is built by harnessing natural hydrogel technology and built with six natural ingredients. It doesn't contain any colorants or preservatives and comes in 40g servings that contains 60% carbohydrates – a high weight to energy ratio.

When using as you would any other gel - towards the end of a hard ride, taking maybe a couple an hour - Maurten's Gel seems to have the same effect as any other product on the market. However, when you take it according to its USP - the ability to take four an hour - the impact is noticeable, and left me feeling very strong and powerful during a short but very hard session.

The gels are pricey, working out at £2.75 each if bought in a box of 12. Most gels come in at around £1.50-£2, so you're paying quite a premium for the fact that you can so hugely maximise your carb intake. However, for a big race or event, I'd say it's worth it.

When taken at the rate of four per hour, the gels seemed to work very well. When taken 'randomly' as you might any other gel, their effect feels the same as that of any other.

The impact when taking four per hour, and the relatively plain flavour which enables you to take a lot in a short duration.

The price and the opening tab.

Would you consider buying the product? Yes - for key events.

The gel is very impressive if you do take four in an hour, and that earns it a solid 8 as a start. However, if used at a lesser rate (two or three an hour), it doesn't offer anything out of the ordinary and just becomes expensive, and mitigates this score somewhat. The opening method could do with a little work and it costs a lot, also knocking it down a little.