Back to REVIEWS
review
Puncture kits 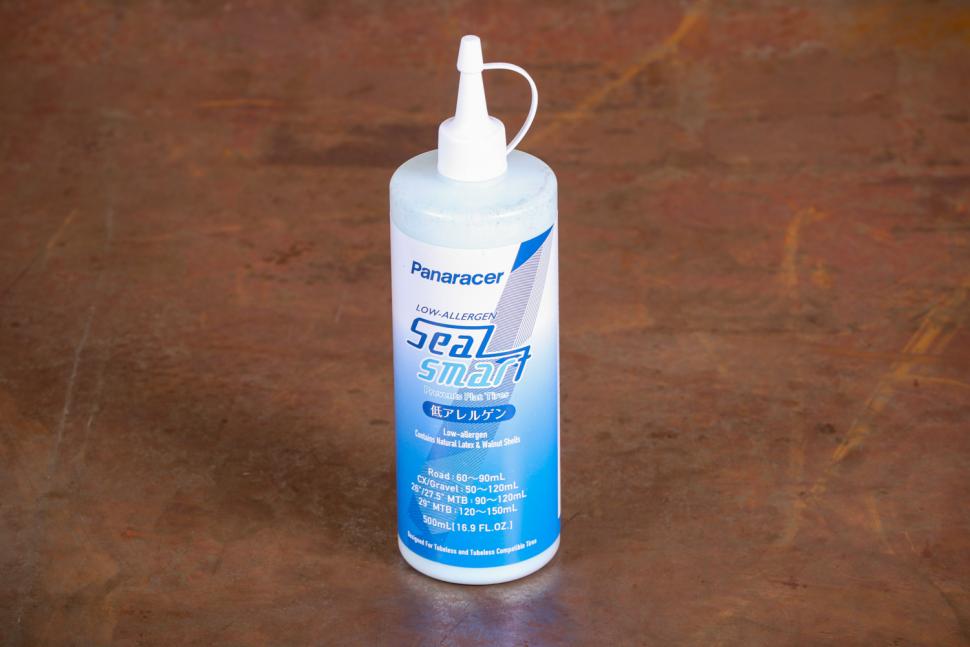 Panaracer's Seal Smart tubeless sealant is an all-natural latex-based sealant formulated specifically for setting up supple, thin tyres. It does a great job of setup and sealing, and holds air over weeks, but is messy and seems to evaporate quicker than others.

I've been a fan of Orange Seal for years, and have a 32oz bottle always to hand in the workshop. The only tyre that has failed to set up first time using Orange was a 35mm Rene Herse (nee Compass) Bon Jon Pass Extralight. Basically, the layer of rubber on the sidewalls was slightly too thin, with multiple micro-holes that refused to seal – somewhat counter-intuitive given Orange is advertised as being good for cuts 4-5mm in size.

Cuts work differently to micro-holes – a cut gets sealed the way your blood coagulates, the large particles in the sealant effectively log-jamming the cut as they pass through suspended in the liquid, eventually stopping the flow altogether. But where the hole isn't large or fast-flowing enough for the particles to create that blockage, it's only the liquid base that's flowing – and if the makeup of that liquid itself won't seal then the tyre will never stay inflated.

In that instance, Stan's sealant failed too, the problem being down to a manufacturing defect in the handmade tyre. I raise this as context, because Rene Herse has worked with Panaracer for two years to develop the Seal Smart product partly to address the challenges of sealing ultra-thin, supple tyres where micro-holes are a fact of life.

When Rene Herse sent me a replacement pair of Bon Jon Pass tyres to review, the set that had failed to seal went into the Spare Parts Shed Box Of Despair – likely never to be seen again unless needed in an emergency with an inner tube. After retrieving the pair and evicting various arachnids, the tyres went on in a dry run sans sealant, to make sure there was a good chance of getting them up once filled. This is always a good thing to do to avoid having to remove a liquid-filled tyre to add another layer of tape if needed. All good there, so on with the test.

Price-wise Seal Smart is slightly more expensive than options like Orange or Stan's, but not by much – a 16oz refill bottle of Orange is £20.99; Stan's is £18. Given its smaller market reach it's less likely to be discounted, but in the bigger picture of tubeless spend it's not likely to be the defining purchase factor.

Also, having shaken well as per the instructions, the very bubbly, frothy nature of the sealant made for a fair amount of mess as once a large bubble formed in the neck it then directed any further fluid down the outside of the bottle. Adding further to the bubbly mess, the liquid seemed to seep through the threaded seal of the bottles, further reinforcing my view that the suspension liquid is a lot finer in makeup than other sealants where I'd never struck this issue.

I also tried briefly with my go-to sealant installer, the Milkit, but that clogged instantly.

So really, the only way to achieve a faff-free setup was to decant the required volume of sealant directly into the tyre with part of the bead off the rim. If your rim/tyre combo isn't optimal for this, you may need to resort to installing via the valve with the core removed – having a sharp de-clogger to hand. This may sound like I want a sealant that won't seal, but I've done many setups of Orange, Stan's and Slime Pro – all via the Milkit or bottles – all without this clogging issue. Maybe Seal Smart is just too good for its own good.

> What they don't tell you about tubeless

Fortunately Seal Smart is organic, totally harmless and smells slightly minty, so wiped up easily with no residue. Not one recommended if you're setting up in the kitchen, mind.

Whereas with the Stan's or Orange setups there was a veritable constellation of bubbling sealant through the sidewalls, with the Seal Smart there were a couple of tiny dots, which once wiped off didn't reappear. Now, this isn't the case that the Orange or Stan's had already sealed what holes there were – they had failed to seal the tyres over several days, and the rate or occurrence of leakage wasn't abating, pointing to an inherent mismatch of capability vs task. So it's safe to chalk up Seal Smart as the industry leader in sealing super-supple thin sidewalls where others have failed. Given thin, supple sidewalls are Rene Herse's raison d'être, no surprise that it's developed a product to achieve optimal setup results therewith.

Regarding longevity, after a few weeks I needed to swap tyres so had a chance to look at what was left. It's hard to quantify accurately, but my opinion is that some had evaporated. After leaving the tyres off the rims for 24hrs what remained had evaporated completely, leaving just tiny white flakes – a pleasant surprise from the usual coagulated mess of alien snot that other sealants bequeath. During the review month I rode some pretty hairy trails, and – fortunately or unfortunately – didn't experience any issues whatsoever. Leaving the bike sat for two weeks, pressures had dropped from my go-to 32psi down to about 20 – what I'd expect from an inner tube.

Given the issues with passing the sealant through various nozzles, and the instant sidewall sealing of previously troubled tyres, I have little doubt that Seal Smart is indeed up to the job of sealing cuts as advertised. Whether it's the right seal for you really comes down to the tyres you use, the sealant management system you adhere to (eg MilKit), and a few other considerations such as the importance of being low-allergen, latex-based or organic in nature. Also, whether having to check and fill sealant levels by breaking the bead seal is a no-no, or an acceptable compromise.

As with the superlight, supple Rene Herse tyre range, it comes down to understanding the compromises or extra work needed in order to achieve performance gains – and then working out if any additional faff or cost is acceptable. I'll be keeping Seal Smart to hand for my Extralight thin-walled tyres, but as I love the MilKit system and not having to unseat tyres, I'll be sticking with Orange Seal for my other rubber. If you find your tubeless tyres won't seal, or you have specific need of low-allergen, organic sealant, Seal Smart may be for you.

Rene Herse says: "Over the last two years, we've worked with Panaracer in Japan to develop a sealant that is specifically formulated for the supple sidewalls of Rene Herse tires. (The sealant works equally well with Panaracer tires and other brands.)

"The Seal Smart sealant uses natural latex and walnut shells to make the tire airtight and seal it against the rim. Thanks to these ingredients, it's non-toxic and low in allergens. Clean-up is easy, too."

Can't fault it on its ability to plug holes.

Seems to evaporate quicker than other sealants.

It's slightly more expensive than alternatives, but if it's the only thing that will do the job, that's irrelevant.

The cloggy nature of it, and resultant mess.

Did you enjoy using the product? Ambivalent

Would you consider buying the product? Yes, if I stay running extralight tyres.

Would you recommend the product to a friend? If they had thin tyres that wouldn't seal, yes.

I wanted to like this product more, but the faff of clearing nozzles/valves – which points to excellent sealing ability – meant it was almost too good at its job. Given regular checking and top-up if needed is an ongoing part of Tubeless ownership, a sealant should be judged not only by its sealing capabilities, but also its ease of use during maintenance. Therefore the Seal Smart does get marked down because of the considerable faff during setup and then maintenance.

For most setups I'll be sticking with Orange Seal. Hence for me it's not so grand, but for those running premium thin tyres it could be a winner. 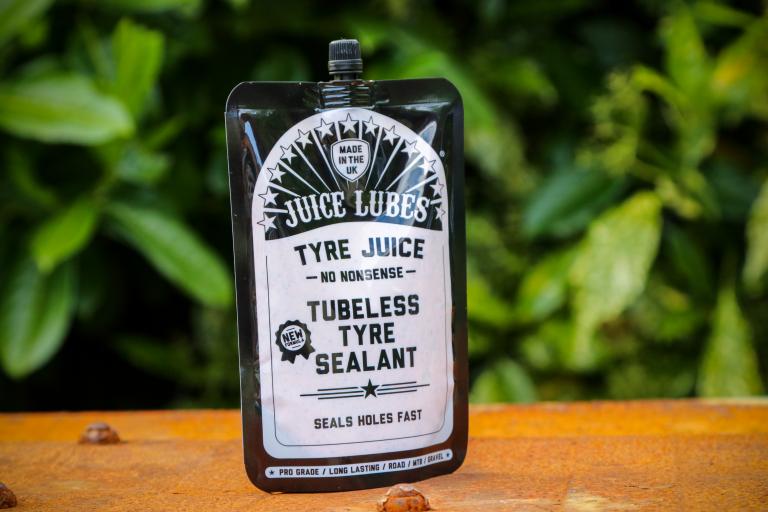 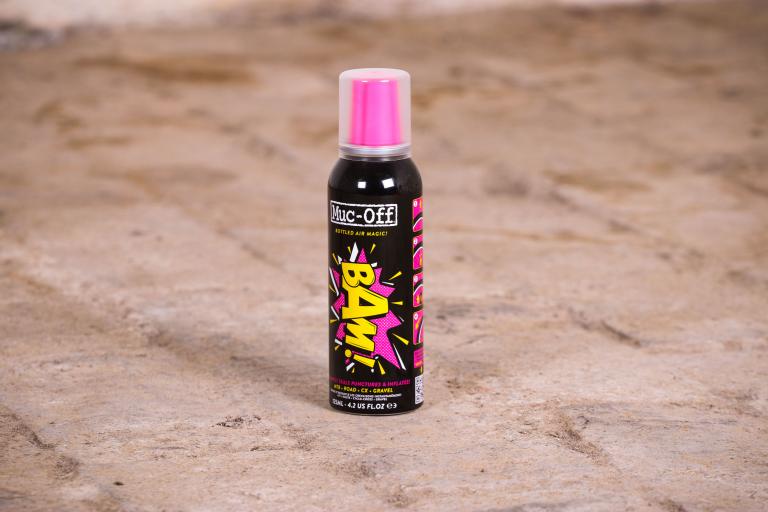 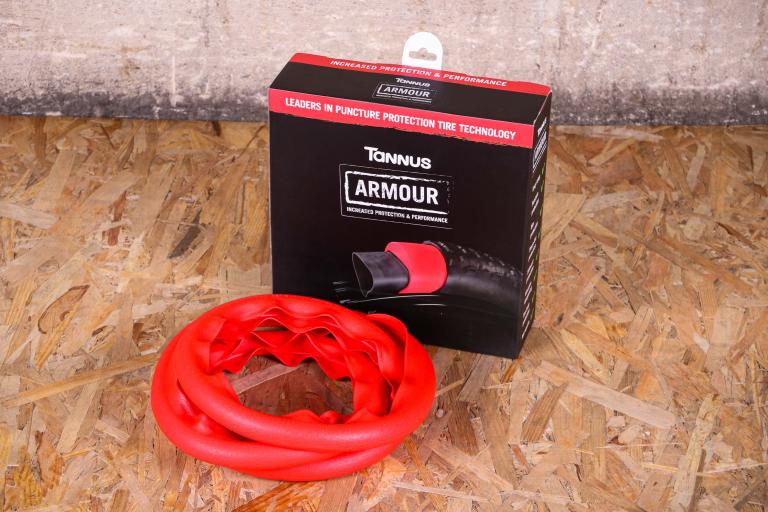 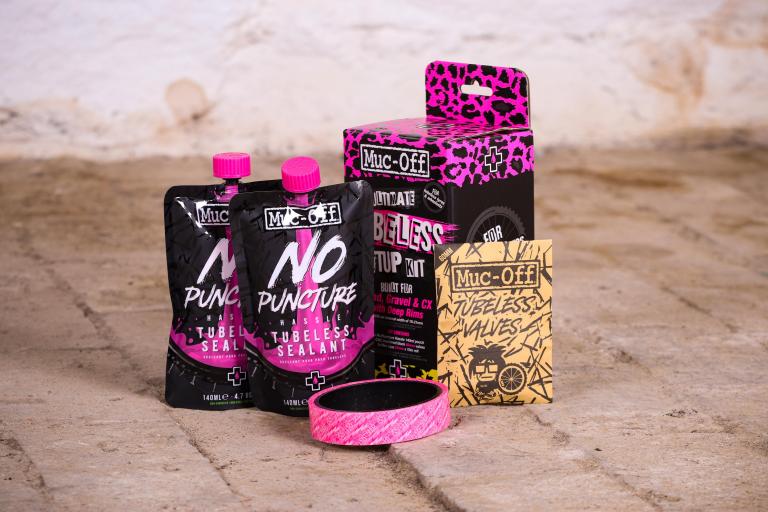