8
10
Timely reminder that racism can pervade all aspects of life, including cycling
Great timing
Unusual photos
Sad and depressing
Weight:
690g
Contact:
www.rapha.cc
How we test

Black Champions in Cycling appears at a time when racism and discrimination is highly topical, and often leads to all sorts of ill-informed debate and argument. The main aim of Marlon Lee Moncrieffe's book is to highlight the additional challenges that black cyclists have had to overcome to succeed in the sport over the years.

I am forever dismayed at the ways in which almost any group of people seem intent on 'othering' those who are different to them – whether it be in gender, religion, weight, accent, hair, or in this case, skin colour. This manifests itself in many ways, including taunting and persecution – or discrimination. 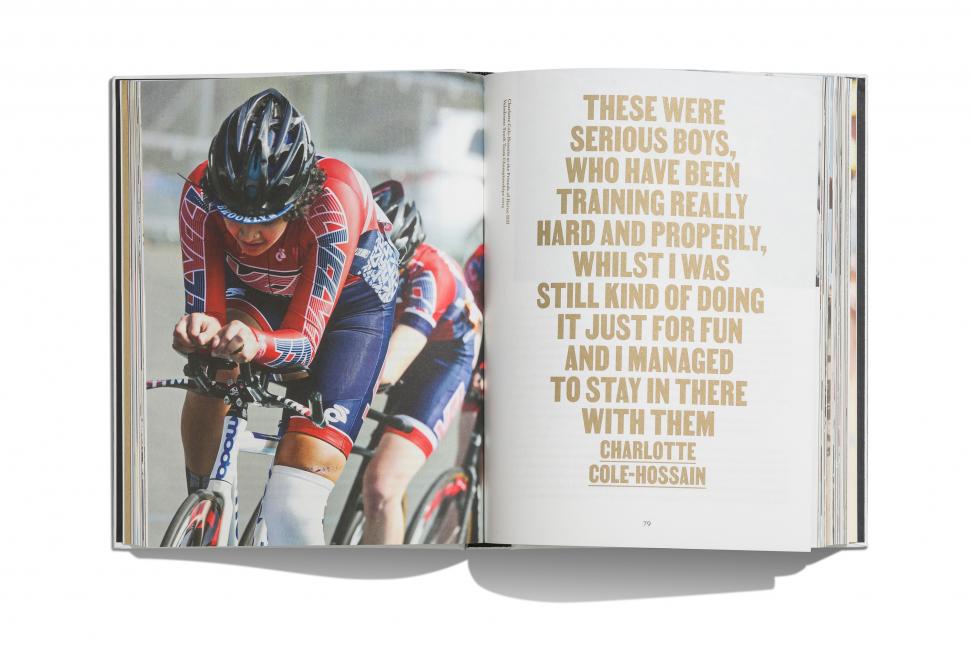 Some might say I'm not best placed to review such a book, because the only thing I have in common with those featured is a love of cycling. On the other hand, those same attributes should make me the right audience if Moncrieffe wants his book to make a difference, through raising awareness and educating others. Moncrieffe combines comments from black cyclists with his third-person narrative, grouping common themes together into chapters. I can't tell which parts are the result of direct interviews, and which come from the many sources listed in the bibliography – which is as it should be.

One reason for the extensive research is that Moncrieffe 'began developing my learning about the history of black cyclists and their participation in competitive cycling through my academic research project about black British cycling champions.'

Although this work started in 2009, when stories about racism became more prevalent and mainstream, Moncreiffe finally decided the time was right to publish: at least the cycling world could be better informed.

The black cyclist to have made the greatest impression on me was 'Major' Taylor, as a result of Andrew Ritchie's book about him back in 1988: it is still one of the few biographies of black riders. This was before I was really aware of racism, and I was amazed at what he had to overcome – which made his success all the more impressive. Not surprisingly he features extensively in Black Champions in Cycling: Taylor's experiences may have been rather extreme compared to the other riders covered by Moncrieffe, but many of the principles remain the same.

Two things struck me: firstly, I am astonished that people found some of their actions were acceptable – although I realise I am judging things from a modern-day perspective. Secondly, I was surprised to read what sort of things were still going on fairly recently – which is of course one of the main reasons for producing the book. This year could add a postscript to some of the riders covered: Kye Whyte became a household name when BMX made it to the Olympics, and those who welcomed his medal should be grateful he persevered when things were tough in his earlier years. Nic Dlamini has had his own challenges, but did become the first ever black South African to ride the Tour de France – or some of it.

Kadeena Cox has continued the good work at the Paralympics, throwing in a world record for good measure – and that's just her cycling exploits. When reporting on insults aimed at the riders, Moncrieffe keeps words like 'nigger' and 'coon' intact if those were the actual words used, and it does grab your attention: the fact they are not in such common usage today makes the shock of seeing them so much more powerful than a bunch of asterisks – and surely shows that things are changing.

Although all the pictures contain non-white cyclists, it was rarely the colour of skin I noticed first – and not just because some images are monochrome. Not only are most of the images new to me, many of them are very different to your usual racing photos: more amateur snapshot than professional portrait. Editor Guy Andrews explains that 'one of the most challenging parts of realising this book was the invisibility of black riders in cycling photography'; as the picture credits show the solution came from assorted family and friends (e.g. Russell Williams' mum), rather than the usual agencies and archives.

The results may be lower resolution and grainer than is ideal, but it's great to see them. As a record of historical events, the book does its job, but you will probably end up feeling depressed after reading it, fearing there is no hope for racial harmony. Moncreiffe gives very few grounds for optimism, although he does allude to some change within British Cycling.

There are also occasions described where it feels like no racism was intended, nor was there any discrimination, and I felt that including those diluted the impact of the unambiguous cases – but then I haven't been on the receiving end.

It will be interesting to see what effect such a book has: will it change anything? Will it even reach the right audience? Will it prompt other sports to do something similar? Possibly not, but it must surely be worth trying.

In the short time since launch, this book has sold faster than any other book by Rapha – which must be a positive sign.

Timely reminder that racism can pervade all aspects of life, including cycling

From Rapha Editions: "Black Champions in Cycling is a thorough and thoughtful exploration of the rich and often overlooked history of Black cyclists. A world-leading expert on the history and lives of Black cycling champions, former elite racer and academic Dr Marlon Moncrieffe combines his own experience of elite-level racing with that of several contributors.

"The first book of its kind, this collection of stories, personal reflections and interviews from the sport's historical icons and present-day changemakers tackles prevalent issues regarding access, diversity, inclusion and representation. Exploring how prominent figures such as Major Taylor and Maurice Burton first discovered cycling, the book highlights the mentors who encouraged them to pursue their ambitions as well as the explicit and implicit forms of discrimination they faced.

"From the first non-white rider to race the Tour de France in 1914 to the Black cyclists pushing boundaries today, discover how a determination to succeed in the face of discrimination defined the racing careers of these great athletes.

It aims to highlight an issue, and it succeeds.

I am more aware of the issue than before.

I am less optimistic of a resolution than before.

Acceptable value for the size and quality of hardback book, but lacking in images - for the reasons discussed.

It succeeds in illustrating the problem of racism and its associated discrimination, which was the aim. Numerous relevant interviews and thorough research help to make the case.