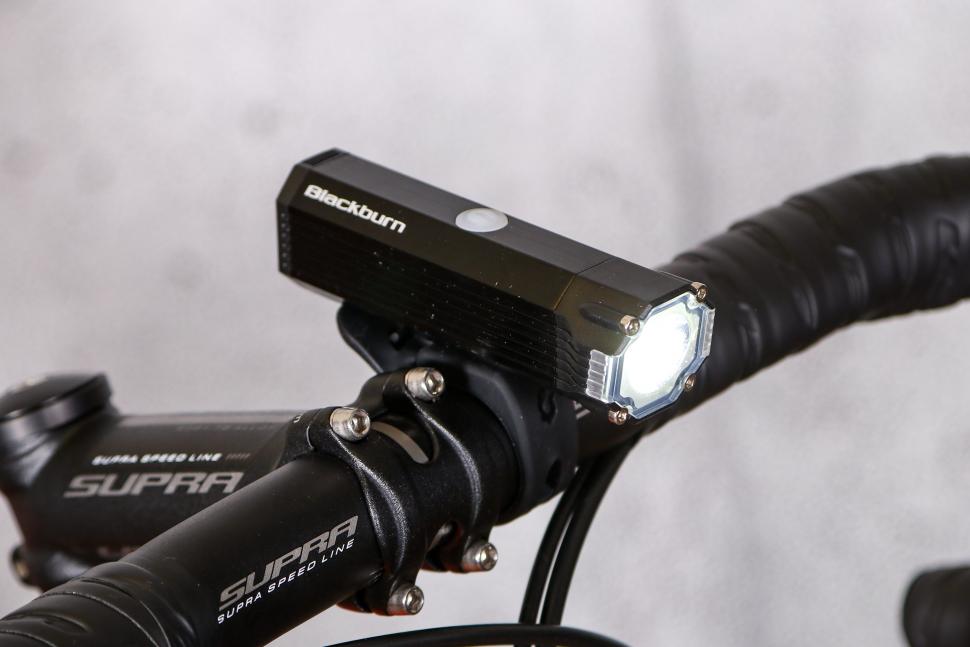 Although I wouldn't class Blackburn's Dayblazer 1000 as one of the very best front bike lights you can buy, it's a decent general-purpose unit, throwing out plenty of light for both seeing and being seen, exceeding its claimed run-times in all its modes, and easy to swap between bikes. Its only significant fault is a rubber-strap mount that needs careful brute force to get it properly tight.

There's nothing very sophisticated about the Dayblazer 1000's beam, which is basically a uniform, broad, round patch of light at a claimed maximum of 1,000 lumens. It throws plenty of light down the road so it's good for moderate speeds on unlit lanes and gravel roads. I felt perfectly confident at 51km/h on an unlit road descent where I'd done 56km/h the day before in daylight on a faster setup. I was also happy whizzing down a dirt road at 37km/h, though that felt like the limit of my skill and bravery without a lot more light and a proper mountain bike instead of the Carrera Subway I was on.

That was in Blitz, the brightest of three steady modes. High (500 lumens) and Low (350 lumens) modes put out enough light to see where you're going at lower speeds so you can conserve battery on longer rides. For visibility while commuting and road riding you can also choose a throbbing Pulse mode and a Strobe mode.

The beam shape means you end up illuminating the trees and throwing light into oncoming road users' eyes if you want to illuminate the road well ahead.

If you want to use the Dayblazer 1000 as a daytime running light, then you want the Strobe mode, which is an extremely effective attention-getter with a really long run-time. Ride for an hour a day and it'll alert drivers to your presence for over four weeks.

The Dayblazer 1000 attaches to your handlebar with a thick rubber ladder-strap. Riding fast over rough ground can make it move a bit if you don't fit it round the fattest section of your handlebar and make sure you get it as tight as possible. There's a fitting in the box to attach it to a GoPro mount instead, which would be the way to go if you want a more solid mounting.

An Exposure Lights cleat will also fit, so if you've got an Exposure mount kicking around you could use that.

Cycling through the power levels takes you from one to the next without turning the light completely off at any point. When you do turn it off, by holding the button down for one second, it remembers which mode you were in and returns to it when you turn it on.

However, if you're riding dirt roads it's a bit disconcerting to cycle through the two flashing modes to get from High or Low back to Blitz. Another light I'm currently testing has you press and hold its button to access flashing modes, which is a better way of doing things. 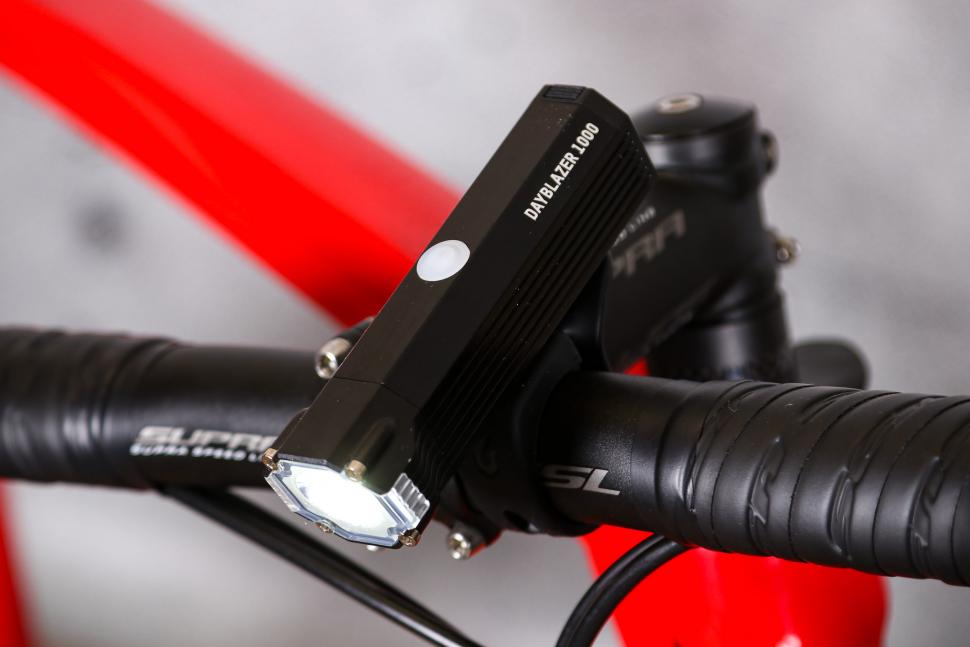 Speaking of the Dayblazer's button, it doubles as a battery gauge, showing green for more than 75% charge, orange for 75-25%, and red for less than 25%.

That's it for features; you can't tweak the power levels like a Moon light, and there's no ANT+ connection to show battery level on your bike computer like a Giant Recon.

As you can see in the table I created, above, in every department the Dayblazer 1000 exceeds its claimed run-times. Attached to a USB power supply it charged in 260 minutes instead of 300, while the Strobe mode, claimed to run for 930 minutes (15 hours, 30 minutes) ran for just over twice that. 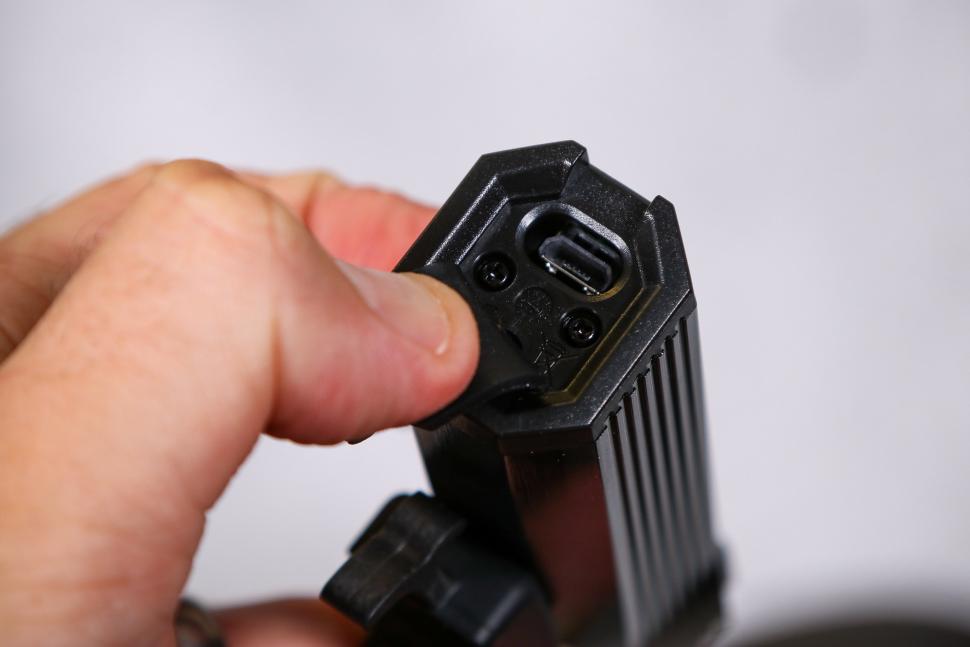 I was a bit concerned that in Blitz mode I might be seeing an inflated run-time because the unit had got warm and that might have throttled the power being delivered to the LED. I repeated that test with a fan blowing air over the light, keeping the temperature under 30°C. The run-time was the same.

Of course, it may be that Blackburn has deliberately understated the Dayblazer's run-times so that anyone who actually measures them feels like they're getting something for nothing. If so, well done, it worked on me.

There are lots of good lights around this price and output, some of which offer more for your money.

The Moon Rigel Pro, for example, has some clever additional features for its £64.99 rrp (read our review for more details), but shorter run-times, while the £79.99 Giant Recon HL1100 is slightly brighter and offers Smart Mode to adapt to the conditions as you ride.

If you're looking for a front and rear light, check out our best bike lights guide which lists our top 10 of each.

The Blackburn Dayblazer 1000 is a solid if unsophisticated choice for commuting, evening excursions and light trail riding. If you can pick it up at the deep discount a couple of online retailers are currently offering, it's a bargain, but there are better lights for its £65 full rrp.

Who should buy the Blackburn Dayblazer 1000?

Anyone who wants a simple, basic but bright light and can get it at a deep discount.

Want to hit the local trail for a midnight shred, or commute home on a November evening? The sleek and tiny Dayblazer 1000 has you covered.

This little devil packs a 1000-lumen punch onto a tiny bar perch. Weighing in at just 140 grams, this light hits way above its weight class. Gone are the days of a 10-watt halogen bulb and a bulky water-bottle-shaped, lead acid battery pack. Now we've got it all wound up in a tiny bar-mounted front light! Want to hit the local trail for a midnight shred, or commute home on a November evening? The sleek and tiny Dayblazer 1000 has you covered. Featuring our eye-popping BLITZ Daytime Running Mode to grab the attention of cars, an action-style camera mount, ample side visibility and IP-67 submersibility, the Dayblazer 1000 is your new best riding buddy.

Water Resistance: IP-67 submersible - Ingress protection rating, or "IP Rating," is a techy way to describe the level of water- and dust-proofness of a product. This light meets the IP-67 Standard, which means it is totally protected against dust/grit and fully protected against the effects of immersion between 15cm and 1 meter for 30 minutes.

A rubber strap is a bit basic for a £65 light, and you have to make sure you use the tightest possible.

Basic but unexciting. Everything works as it's supposed to, but other similarly priced lights have considerably more sophisticated features.

Smack-dab what you'd expect for the power and run-times.

It really is bang average unless you pick it up at a discount. So do that.

It lights the way just fine, but there are so many lights out there that are cleverer.

Being able to see where I was going.

Very ordinary rubber-strap mount; having to go through flashing modes to get from low to brighter modes.

It's very similar to its rivals, as you can see from those mentioned in the main review.

Did you enjoy using the light? Mostly

Would you consider buying the light? Only at a deep discount.

Would you recommend the light to a friend? Only at a deep discount.

I admit I was wavering between 6 and 7. Overall, this is a good light, it's just in no way exceptional.