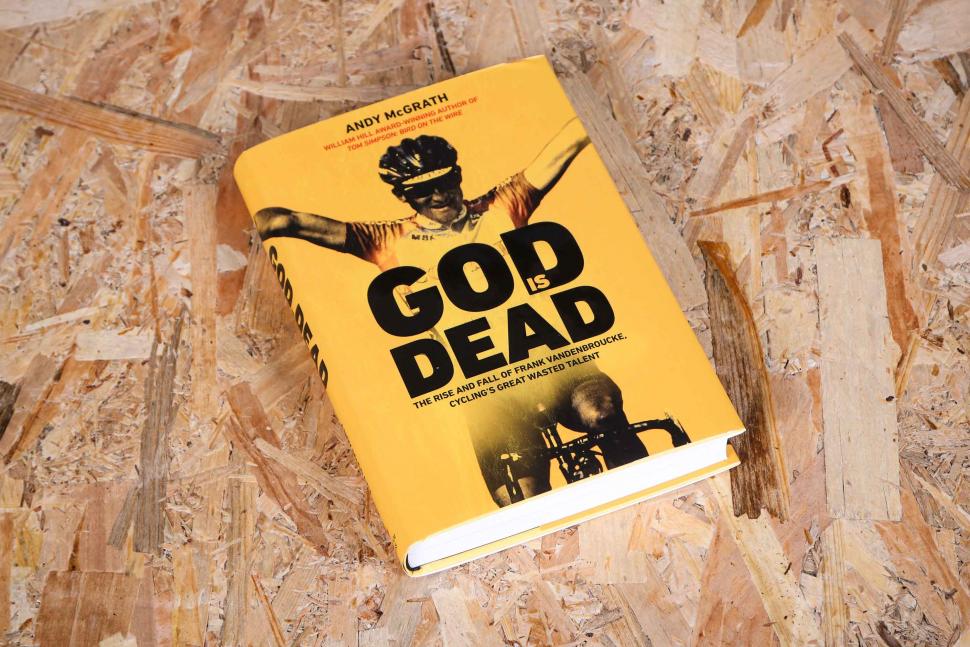 9
10
Well-told and compelling tale that justifies the claim that VDB was 'cycling's great wasted talent'
Very revealing biography
Decent set of images
It's yet another book about a cheat
Weight:
547g
Contact:
www.penguin.co.uk
How we test

Frank Vandenbroucke was a professional cyclist who experienced a rapid rise to fame, but although he did well enough in the sport, a combination of drugs and other distractions curtailed his career. His premature death did nothing to dissuade those who think he was on the way to becoming one of the greatest ever, which is partly why books are still written about him. God is Dead tells the story of this colourful character, who didn't seem to do anything in half measures. It's not the first biography of a cheating cyclist, but Andy McGrath's thorough research does set this one apart.

I've said it before, and no doubt will have occasion to say it again, but I am always frustrated that so many cycling biographies are about dopers. I dislike the rather one-dimensional impression it gives of our sport, but judging by their continued popularity there must be demand.

More galling, in my opinion, are those books where the bad guys are still alive and able to tell their own story, because then they continue to profit from their cheating. That's why Tyler Hamilton's The Secret Race didn't sit well with me, as but one example, despite being a great read.

The subject of God is Dead, Frank Vandenbroucke (or VDB), adds a different dimension, where an early death after a rapid rise to fame (and a self-inflicted decline) leads to unfathomable mythology. It proved to be a good career move for Vandenbroucke, just as it was for Marco Pantani; VDB even commented that 'I have lived the same life as Marco, but I have survived it', which turned out to be only partly true.

When a writer of the calibre of Andy McGrath enters the fray, you can expect something beyond a conventional biography. McGrath has form, with his tome on Tom Simpson receiving justifiable praise.

There have been books about Vandenbroucke before, although only the one in English that I know of. McGrath quotes extensively from another book, Vandenbroucke's 2008 autobiography: the title 'Ik Ben God Niet' translates to 'I'm not God', in reference to the adulation he received during his time as the latest 'next Eddy Merckx'. It also gave McGrath the prospect of a suitably polemic title for his own work.

The question is, will it appeal to more than the 'VDB' fan club? Unfortunately (given my misgivings), it will. I was reminded of Thomas Dekker's book The Descent, where activities on and off the bike are taken to such extremes that it makes for compelling reading, however distasteful they might be.

What would you like to hear about: drugs, money, cars, injury, illness, family rifts, team politics – and a bit of cycle racing? All present – with a central character who is hard to like. There may be little that you can't read about to some extent in other riders' biographies, but VDB seems to excel in all areas.

Without trying to excuse the excesses, but rather to help understand how hard it would have been to behave 'normally', McGrath notes: 'Given Belgium's small size and finite number of celebrities, there was a greater co-dependency between press and personality, and more regular appearances on the front page.' This leads to a 'transition from the sports section to tabloid fodder', living 'adult life under a media microscope'.

I am reminded of the old joke about naming a famous Belgian – apart from Tintin.

Fittingly, the untimely end is definitely not glamorous, and details are a bit unclear, with VDB 'last seen [alive] by a prostitute in a grubby hotel room with insulin, Xanax and sleeping pills by his bedside'. It almost makes you feel sorry for him.

McGrath interviews a lot of people during his research; some are to be expected, such as family members and former team-mates, others less so, such as an 'addiction specialist'. Understandably, there are some who didn't want to talk, including his ex-wife.

McGrath covered a lot of ground in his 'journey down every avenue of Frank Vandenbroucke's life', including 'a literal one around his home country of Belgium'. He wanted to cover 'as many facets as possible of this plural man', and as a result 'the wider family might not be delighted with every detail published'. I would understand if that were the case – but it is also what makes God is Dead a properly revealing 'warts and all' biography.

VDB's career does make for a rather good story, and McGrath has told it very well, but I can't help wishing there were more biographies of this standard about riders who were more worthy of respect. Or do they simply not sell as well?

They called him God.

For his grace on a bicycle, for his divine talent, for his heavenly looks. Frank Vandenbroucke had it all, and in the late nineties he raced with dazzling speed and lived even faster.

The Belgian won most of cycling's most prestigious races, including Liège-Bastogne-Liège and Paris-Nice, enthralling a generation of cycling fans. Off the bike, he only had one enemy - himself. His rise to prominence coincided with a rampant period of doping and Vandenbroucke had a wayward streak. He regularly fell out with team managers and had all-night party sessions mixing sleeping pills and alcohol. A drugs scandal started a long fall from grace, leading to addiction, car crashes, court appearances, marital problems and suicide bids, punctuated by sporting comebacks.

His life was like a soap opera and its premature ending shocked many. In October 2009, aged thirty-four, Vandenbroucke was found dead in a Senegalese hotel room - in mysterious circumstances.

It kept me interested in the story, despite my feelings about the subject.

I didn't really want to like another book about a doper whose career held little interest for me at the time – but it is a compelling story told well.

Already a fan of Lost Lanes? You won't be disappointed. Not yet read one of Jack Thurston’s books? Prepare to be addicted...

Le Fric: Family, Power and Money: The Business of the Tour de France by Alex Duff

The Slow Road to Tehran: A Revelatory Bike Ride Through Europe and the Middle East

An enjoyable way to understand more about the Middle East, and why its people are so often in the news