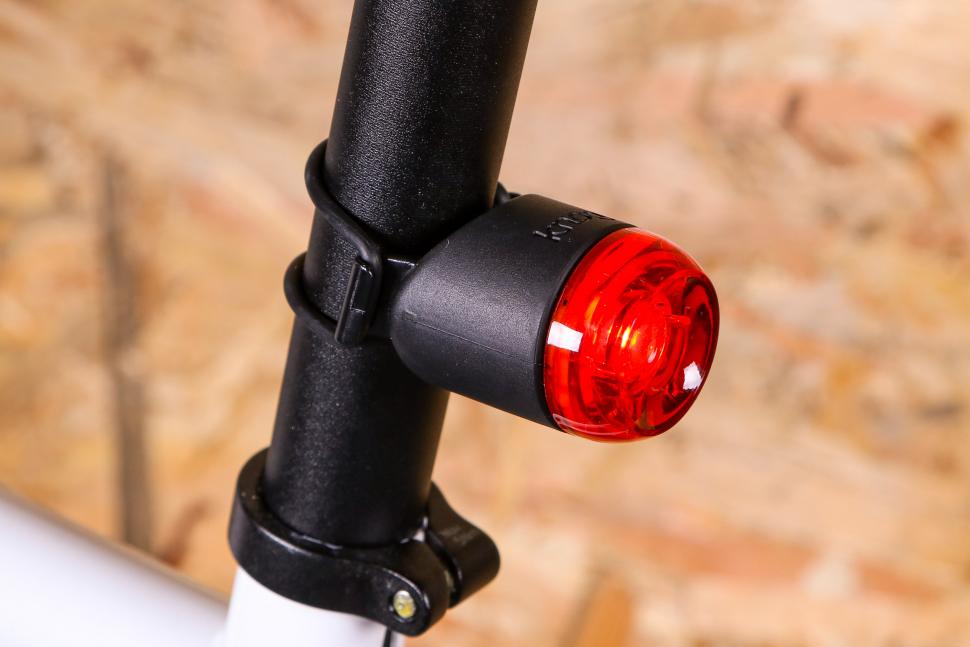 The Knog Plug is a simple and effective rear light, offering a decent selection of modes, good battery life for its price point, and ease of use.

Over the years I have used several Knog lights and generally been impressed with them. The Plug is essentially a stripped-back, everyday light, that is cheap but effective.

It uses a single LED that pumps out 10 lumens, which isn't the brightest but is more than enough for most uses. I found that motorists and other cyclists could easily see me regardless of what else was around at night. I would want something a little more substantial for daytime use, though.

To operate, the light has a single large button on the top which you press and hold to either turn on or off, then press to cycle through the five modes. These are Max, Pulse, Flash, Random and Eco Flash.

The longest run-time is, no surprise, Eco Flash, which Knog says has a run-time over 100 hours; the shortest, Max, is 3 hours. I generally tended to use the middle, Flash, mode which offered enough visibility to feel safe combined with 20 hours' run-time.

I found these quoted run-times were broadly accurate, and for a sub £25 light they're very good.

Charging takes around 2.5 hours from a mains socket, around 30 minutes longer through a computer. Charging is done through a micro USB socket hidden behind a silicone dust cap which also acts as part of the mount. This isn't quite as neat as other Knog lights I've used, which have a USB built in to the light, but it's no biggie. You can also see when the light needs charging thanks to an LED indicator in the lens, which is useful.

Mounting the light is done simply with a rubber band that wraps around the seatpost and connects to hooks on the body of the light; the V-shaped silicone dust cover at the rear sits against the post, keeping it in place. The back of the Plug is angled, which helps it point at the right angle on most seatposts.

I used the Plug in a variety of conditions, including torrential downpours, and at no point did any water get in or was there any impact on its performance.

Its rrp of £21.99 is on a par with lights of similar size and output: the Vel 20 Lumen Rear Light comes in at £20, with 30 lumens but shorter run-times, while the Bookman Block is £20, though lighter and slightly more powerful (18 lumens).

Overall I was impressed by this little light. It isn't as powerful or gadget-packed as some, but it's simple, offers enough light to be seen, is protected against the weather, and doesn't break the bank.

Knog says, 'This is a light for every-day, for every ride, for everybody.'

It's waterproof, and the slightly rubberised material means it is likely to survive a fall.

It could not be easier – one button to use it, one strap to attach it. Simple but effective.

You get three bands that come with the light for all seatpost sizes; once on, it holds the light in position well.

No problem at all, I used this is very wet conditions without any problems.

Battery life is very good for a £22 light.

It's not the most powerful, but good for the price, as is battery life.

Early days, but it's stood up to rain and dirt, and there is no reason to think it won't last a long time.

Coming in at 32g means it's not the lightest on the scales, but is hardly going to hinder you.

Around the same price as others, and the long battery life makes it more attractive than some cheaper options.

It's powerful enough to make sure you're seen, without blinding anyone. Its long battery life means it works well as a backup light too.

It'd be nice to have the USB built in, like other Knog lights.

The Bookman Block is £20, lighter and slightly more powerful; the Vel 20 Lumen Rear Light is also £20, with 30 lumens but shorter run-times.

It's a pared-back but effective rear light; it's not the brightest but there's appeal in its simplicity. Its battery life is also good, especially compared to others in the same price range.