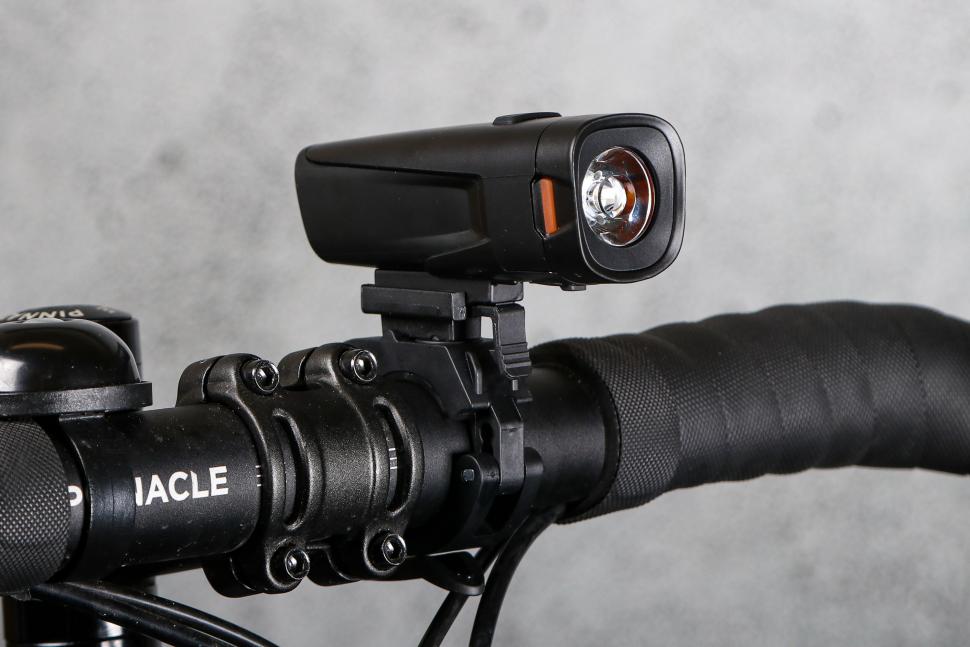 The Proviz LED360 Rigel front light is a great option for both urban and rural riding. It has a nice beam shape, best-in-class run-times and sensible mode choices. Only the rattly bracket is a real disappointment, and it could do with better battery status information, but it's one of the best bike lights for the money and a really good pick.

This is a pretty stock-standard single-LED torch, with a plastic body, a USB-C port under a rubber bung at the bottom of the light, an alloy mounting shoe and a single control button. There are two amber side visibility windows to help you get seen around town. The light is IPX5 rated for waterproofing, which isn't the highest you'll find but should be fine for riding in all weathers. 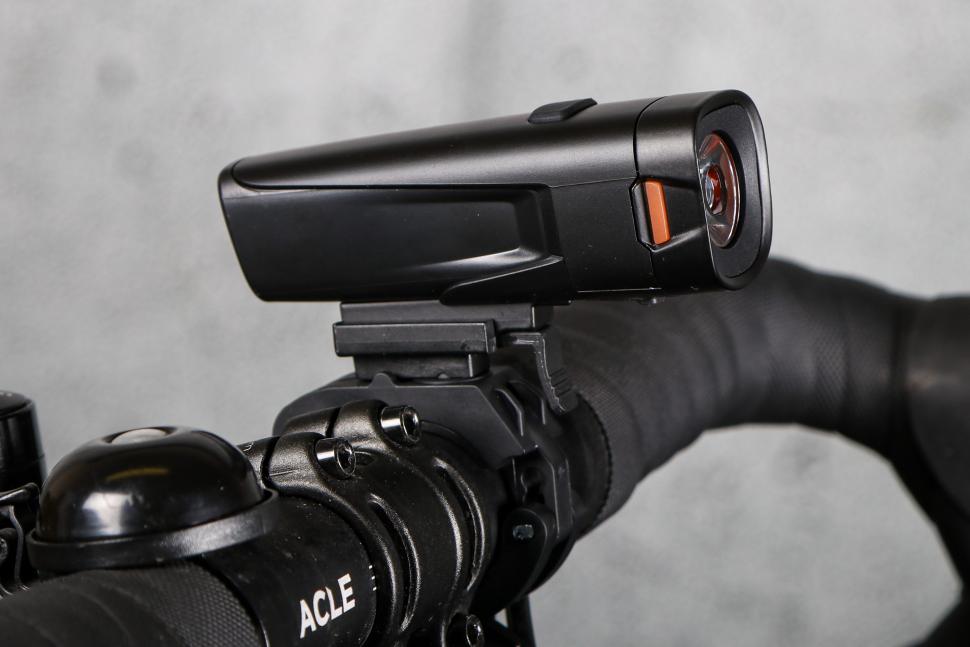 Inside is a 2,600mAh lithium-ion battery. The single XHP50.2 CREE kicks out either 2,000 lumens or 500 lumens, depending on whether you believe the box or the Proviz website. Spoiler alert: it's the lower of the two.

The light ships with a tool-free quick-release bracket which is designed for a range of bar sizes thanks to a moveable pivot, and you can adjust the side-to-side angle, although the bolt for that needed tightening and even then wasn't as tight as I'd like. 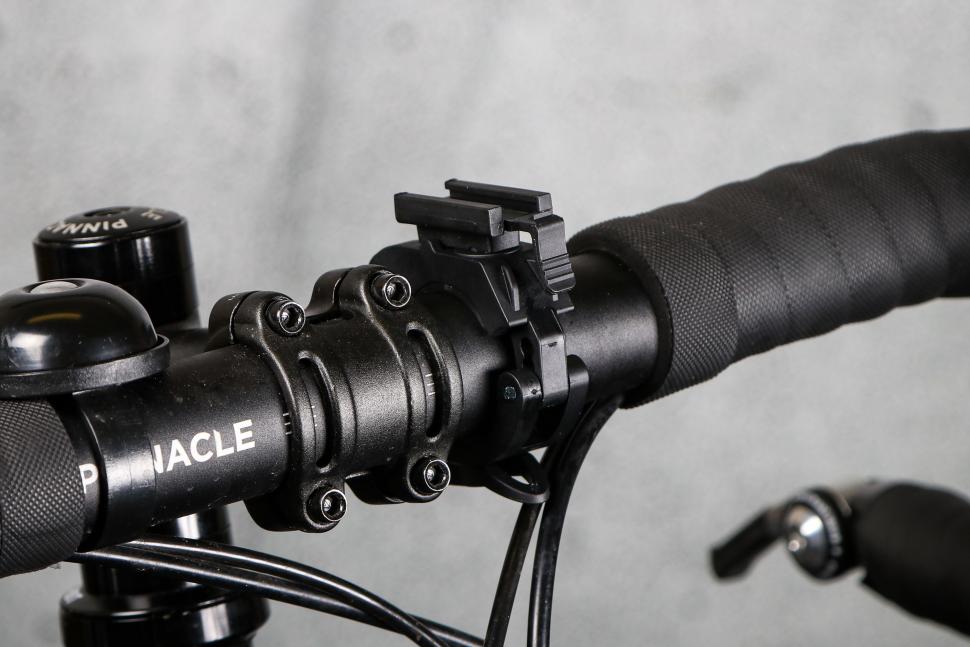 My main gripe with the bracket is that the shoe for the light is slightly too big, so the light rattles around in it. It's fixable with a couple of strips of insulating tape, but you shouldn't really be needing to hack your bike light out of the box to make it work properly. Once I had, though, the bracket was pretty solid and easy to make secure on the bars.

Given the design of the light, I had assumed it would just be a simple round beam, but as you can see from the pic below, it's not: there's a bright central spot at the top centre of a square wider beam. (Unfortunately it didn't arrive in time to be included in the road.cc Beam Test.) The beam shape makes good use of the available light, and it's a pretty friendly beam shape for using in traffic or in shared spaces. It's not a German-style cutoff beam but there's not much throw above the central spot, so if you've got the centre of the spot beam aimed up the road most of the light is going down, and not in anyone's eyes. 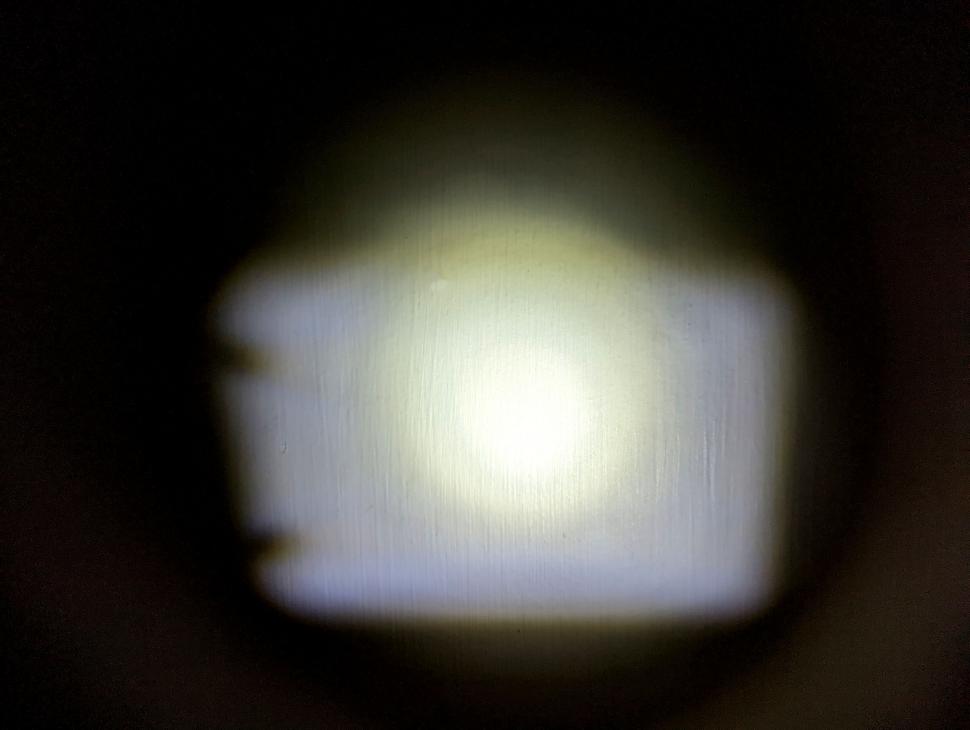 The beam design means that the LED360 feels pretty bright for its stated 500-lumen output. Even on the low beam setting, there's enough illumination to make it through unlit lanes easily enough, although not at any great pace, and the medium beam is great for general night riding.

This pic shows it against the excellent Ravemen LR1600 light, with both on low beam. 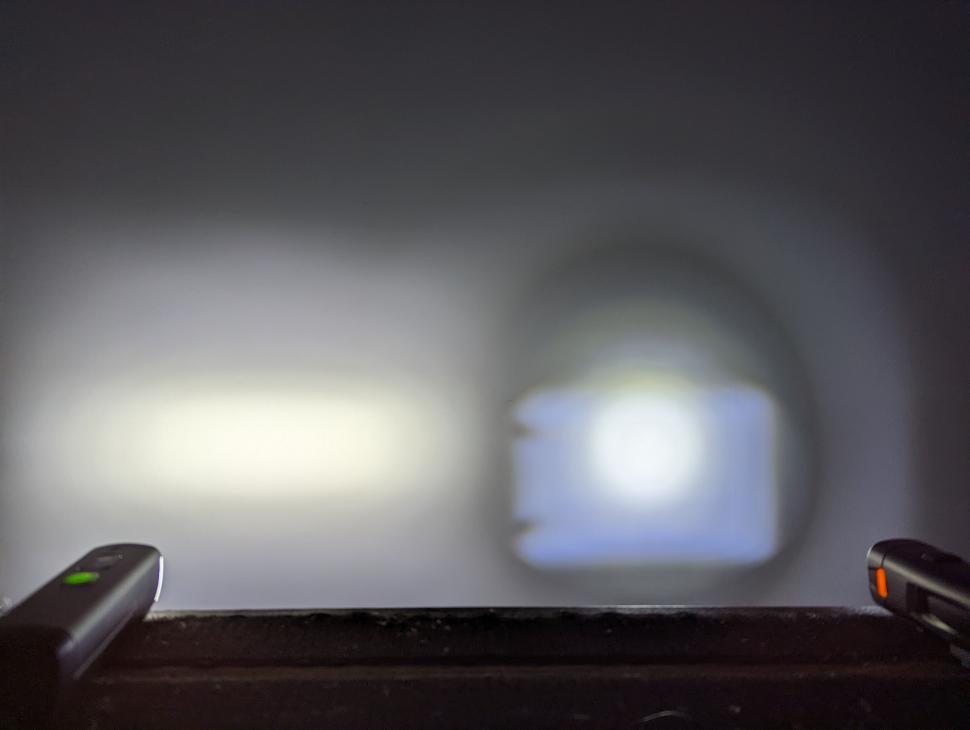 I recently used the Ravemen on a 300km audax and rode all night on that setting, and I'd have few qualms doing so with the Proviz; it's kicking out about the same amount of light (probably 125 lumens to the Ravemen's 150), and arguably the more centre-weighted beam works better at lower power, giving you a bit more throw down the road.

The high beam is enough to tackle the descents at a reasonable pace, and it's not so bright, or the beam so dazzling, that I'd be worried about employing it in company. You don't get the power that you get from more expensive units, so it's not really a light for barrelling down fast descents or venturing off-road, but it's very capable.

The simple click-to-toggle control button means you need to go through the two flashing modes to get back to high beam if you're in one of the lower power settings, which can be annoying if you suddenly find yourself needing more light, but it's not an unusual scenario, especially in what's a relatively cheap light, and the two flashing settings still pump out enough light to see.

Run-times are best in class. Proviz quotes four hours on high beam; I didn't get much over three, but that's still very good. On low-beam mode – which, remember, is genuinely enough to ride by at night if you're riding steady – you'll get about 12 hours of light from a single charge.

Compare that with something like the Cateye AMPP500, from which you'll get a maximum of three hours of light on constant beam, and you begin to see that the Rigel is very much an outlier in its class. I can't think of another light we've reviewed in the same kind of price bracket that even comes close to matching it.

The two flashing modes give you decent run-times too: there's a daytime flash (very low beam and slow high-beam flash) that is more or less ideal for daytime visibility, and a very fast full beam flash that I don't think anyone should ever use, except possibly at a rave.

One gripe I have with this light is the battery status. There's a red battery-low indicator in the button to tell you you're running out of juice – fine in and of itself – and when you plug it in you get a green indicator to tell you it's charging. So why can't we have a green > amber > red battery status using the two LEDs? All the hardware you need is there, it's probably just a case of making the firmware a bit more intelligent.

Charging takes about three hours through the USB-C port, and given how long the light will run for on low beam you can probably get another four or five hours of run-time from a half-hour stop if you're carrying a battery pack.

Overall, this light puts in a pretty impressive performance. To be honest I wasn’t expecting all that much: it looked like your pretty standard round-beam bike torch in the box. But the beam shape and the run-times turn it into a light that's capable enough for most road riding, even an all-nighter if you take a bit of care. Okay, the bracket needs work, and it'd be nice if the LEDs in the button were used to their full effect, but it's hard to be that cross about those things when you're getting such a good light for not much over 50 quid.

It's the same price as the Ravemen CR600 that we tested last year, which has a better build quality and a slightly higher output, as well as a bundled remote control, but loses out significantly on run-time to this.

Similarly, something like the Lezyne Classic Drive 700XL that Liam tested last year or Cateye AMPP 800, as tested by George in 2019, will give you more output, but with a less road-friendly beam shape, and much shorter run-times. And they cost more: the Lezyne is £62, the Cateye £64.99.

If you're after a light that'll handle the commute but also allow you to venture out into the great unlit at night the Proviz is easy to recommend, even with its niggles. Fix those, and it's more or less unbeatable at this price.

Proviz says: "The Proviz LED360 Rigel front bike light has a sleek design and emits a powerful 500 lumen beam from its USB rechargeable (USB lead included) premium lithium-ion battery that gives good run times even on the highest power output. The light comes with easy mounting brackets that do not require any tools and can be removed in seconds. It has four operating modes and the lower power indicator light will give you warning that you need to recharge your light."

Build quality is okay, more plastic than you'll find on some of its rivals.

Fine in principle but the tolerances need addressing.

IPX5, no issues during testing.

Best in class, by miles.

Really very good for the money.

Plastic body so you need to be a bit more careful, but no real issues.

Most of the weight is the big (for the light style) battery.

Plenty of competition at this price point but nothing with a road-friendly beam and this level of run-time.

Did you enjoy using the light? Yes, bracket notwithstanding.

Even with the bracket issues, this is an excellent light. If Proviz addresses the bracket and battery status in the next iteration it's hard to see how you'd fault it.