​​​Assos is a name synonymous with high performance, quality and innovation, with a reassuringly expensive price tag to match, and the Swiss company has gained a loyal following with performance-minded cyclists and racers over the last couple of decades.

The company was founded by Tony Maier-Moussa in 1976, but it didn’t start with clothing. Instead, it was the development of an aero track bike made from carbon, at a time when carbon was rarely used in cycling, the led to the development of the lycra shorts we all take for granted today.

When testing the track bike in the wind-tunnel, the story goes, Maier-Moussa found the wool clothing used by the cyclist pedalling the bike produced a load of drag, so he had him ride naked, and saw an improvement in aerodynamics. This eventually led to the development of the lycra skinsuit and the lycra bib shorts were born, and the rest, as they say, is history. Ti-Raleigh was one of the first professional teams to use the shorts and they rapidly become adopted.

Since then, Assos has continued to innovate and be at the forefront of cycle clothing development. It doesn’t do product years like most clothing companies. Instead, it has a constant range of jerseys, bibs and jackets that it refines over the years. Assos clothing has a good reputation for durability - I know people who are still wearing bib shorts and jackets that are well into their second decade of service. It's worth mentioning too that Assos offers a crash replacement policy - crash within one year of purchase and they'll repair the damage free of charge.

In recent years the clothing market has become a lot more competitive and there are now many high-end brands competing for the traditional Assos customer, and the mid-range of the clothing market is now vastly improved compared to a decade ago, with much of the technology first seen at the top-end filtering down to much more affordable clothing.

So we’ve got some of the latest summer Assos clothing in or review to see how it performs, but before that, here’s a first look at what we’re testing. 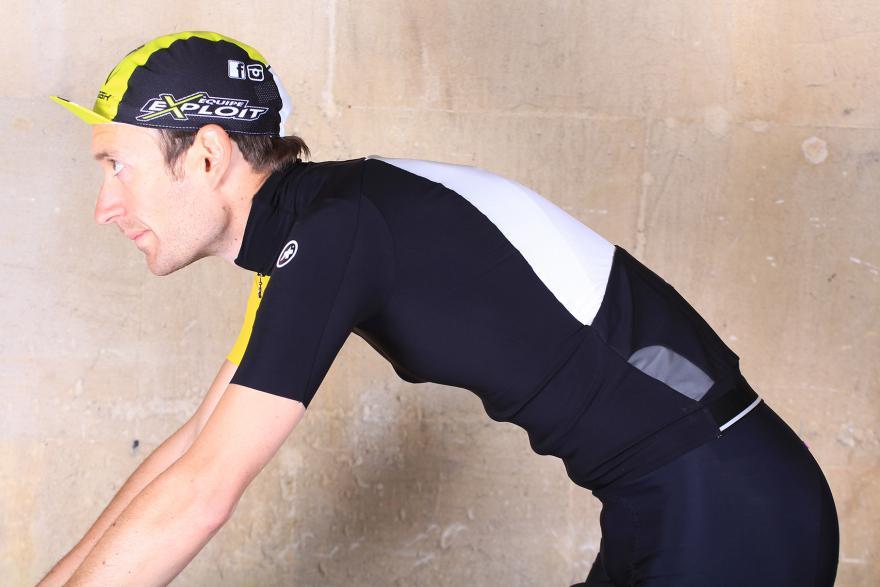 Assos has always been a company led by innovation and nowhere is this better demonstrated than in this Campionissimo jersey. It is designed for summer use and features an integrated base layer - that’s right, you don’t need to wear a regular base layer. Assos uses skinFoil mesh lining for the front panels while the back is lined with mesh, both measures are aimed at helping you combat warmer temperatures by staying warm and dry while ensuring you’re comfortable too. A seamless construction around the shoulders is intended to boost comfort and the fit, which is exceptionally good while the main outer fabric has a light compression and is soft to the touch. The jersey is available with a couple of contrasting colour options. 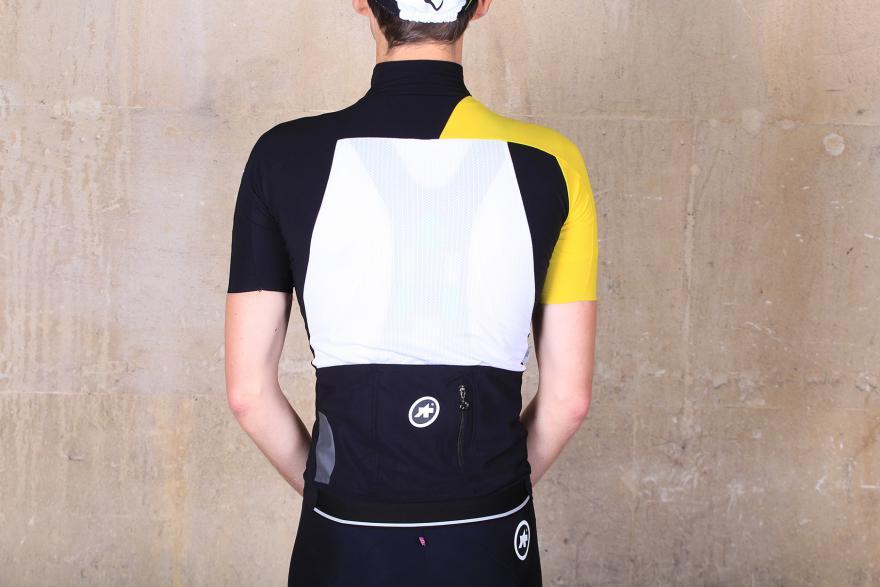 Compared to some previous Assos jerseys, the styling is very restrained and pretty stylish. There are three rear pockets plus one zipped pocket and a full-length main zipper. 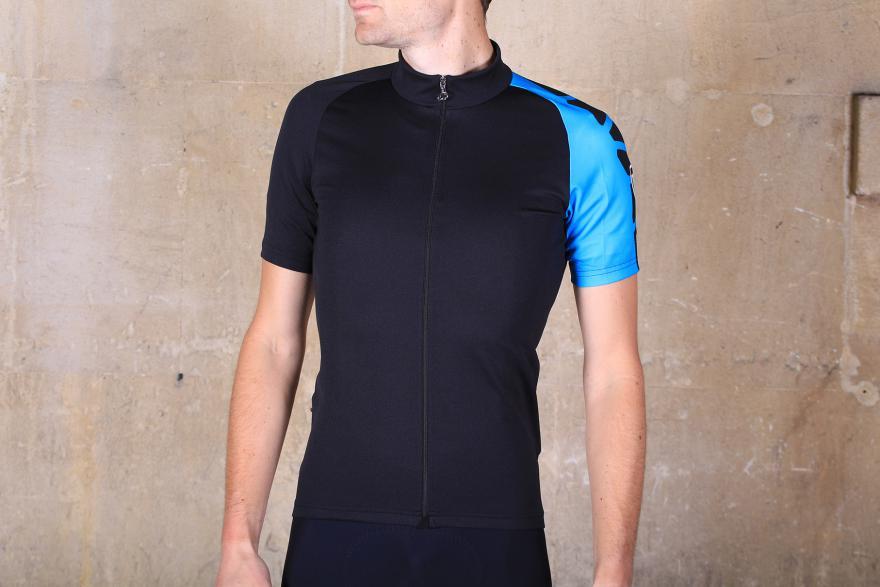 Compared to the Campionissimo jersey, the Mille jersey has a more relaxed fit for those people that won’t want a shrink-wrapped jersey. It uses a synthetic stretch, which Assos calls ‘type 116 custom’ and is cut with raglan sleeves and three rear pockets. 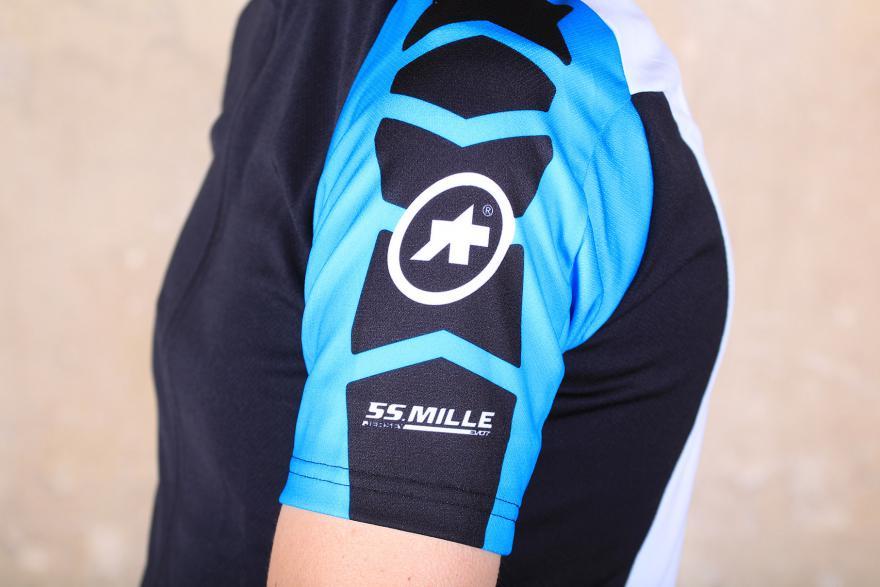 There are some reflective details and a covered full-length zipper, and the waistband is lined with grippy silicone tape.

Cycling has a long association with motorsport, with many F1 racers using road bikes to keep fit. To reflect this shared interest, Assos has partnered with the Mercedes AMG Petronas Formula One team to produce a range of jersey and bib shorts that feature the logos and colours of the team. Assos says the collaboration “is a way for us to tap into some of the best engineering minds in the world.”

So if you ever spot Lewis Hamilton training on a road bike, he might just be wearing this kit.

This jersey is based on the Campionissimo jersey we featured earlier in this article, but available in this special colour edition.

The Mercedes branding is subtle on this one with a small logo on the chest. There are three regular open rear pockets plus one zipped pocket, and a large reflective tab on the left side pocket.

Pair that jersey with these shorts, which feature the equipe_S7 padded insert, which is very similar to the neoPro_S7 pad with the same dimpled foam, but it’s more anatomically shaped, which according to Assos makes it “ideal for frequent riders and racing”. 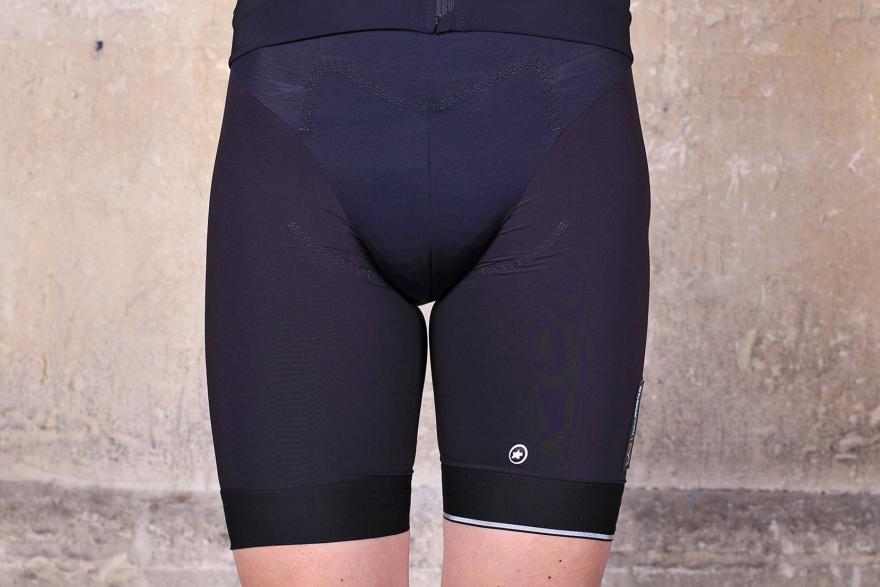 The S7 padded insert is the company’s latest generation chamois. It’s easily identifiable by its purple colour and dimpled memory foam construction, with multiple layers of foam, 8mm thick in places, to provide seated comfort and reduce bulk where the padding isn’t needed so much. The chamois uses four-way stretch fabric. The construction of the pad is designed to ensure breathability and pull moisture away from the skin. In a further quest for comfort is the amusingly named ‘goldenGate’, which refers to the midsection of the chamois not being stitched to the shorts (so essentially just the front and back of the short is attached to the shorts). This is intended to allow the chamois to move with the body and minimise the friction that can lead to discomfort.

These shorts are made from a lightweight fabric with very deep elasticated leg openings. The wide flat bib straps are attached to the shorts near the hips and the front of the waist is quite low, which should help with comfort breaks. 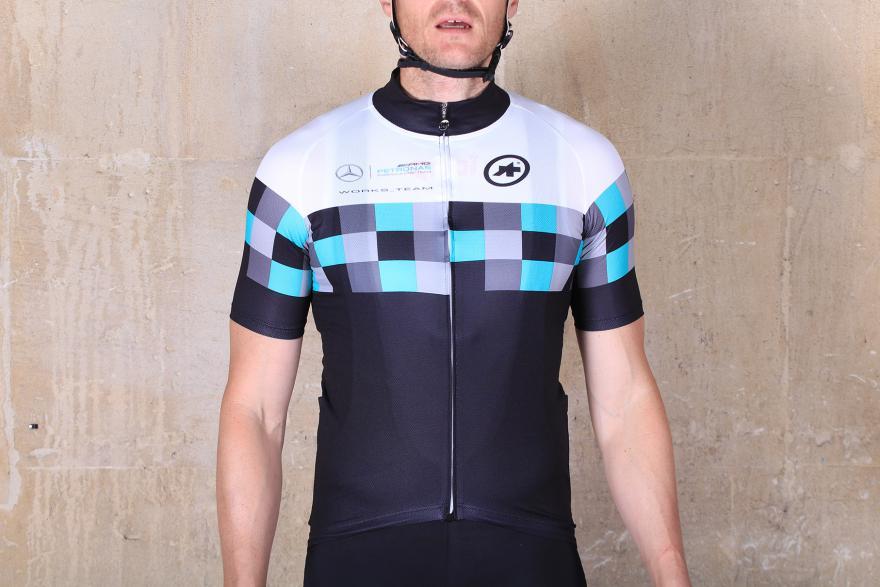 Based on the company’s entry-level SS.neoPro jersey, Assos has developed a grid pattern based on the colours of the Mercedes AMG Petronos team for this special edition version. It’s used on the back of the bib shorts and even more boldly across the front and back of this jersey, with white shoulders and black lower panel. There are three rear pockets and a full-length zipper. These shorts are adorned with subtle Mercedes AMG Petronas branding and inside they feature the company’s neoPro_S7 padded insert, the most affordable in the S7 lineup. It’s the entry-level chamois in the Assos bib short range, but Assos doesn’t skimp on features and it shares much of the design and construction of the more expensive Equipe S7 pad. 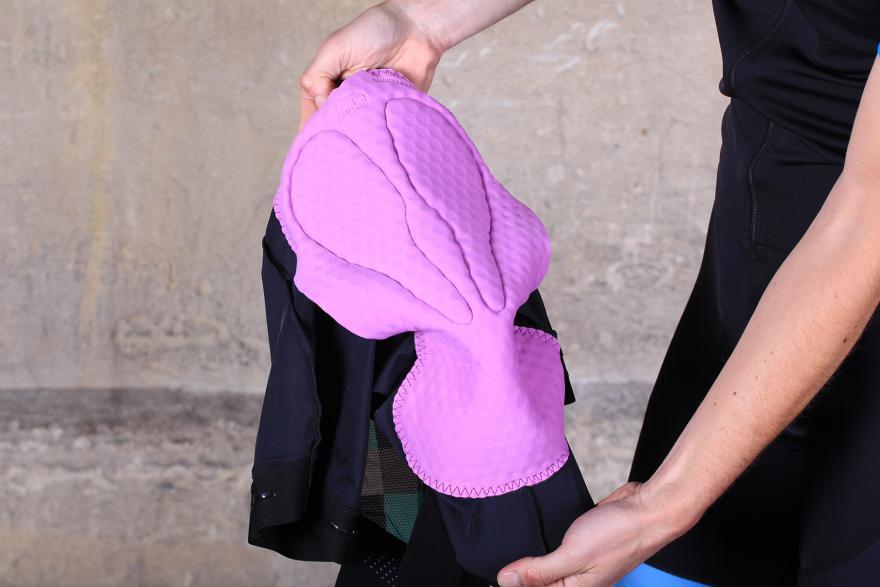 It’s the same colour, has the dimpled surface and the ‘goldenGate’ where the middle part of the chamois isn’t stitched to the shorts. 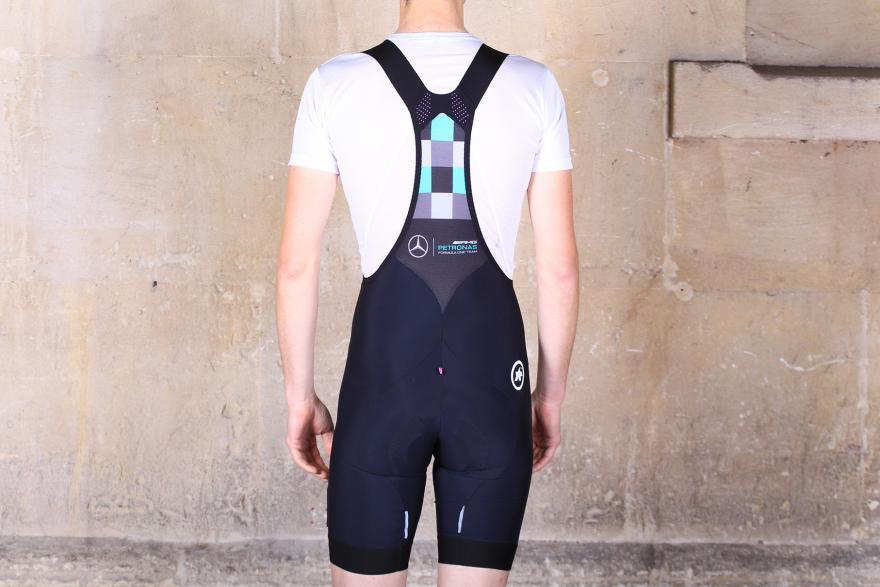 Elsewhere, the shorts have wide flat bib straps with a hook for storing your glasses, presumably when climbing long mountain ascents when you’ve got your jersey fully unzipped. But as well as being designed to boost your visibility on the roads at dusk, it’s also a windproof garment and ideal as a super lightweight gilet for descending mountains or early morning rides, while allowing access to jersey pockets. And it rolls up very small for when you don’t need to wear it. And here it is with a big old flash of light shining on it.

Equipesocks_ Evo7 £14 for pack of two Summer calls for fresh socks, and Assos does a huge range of socks. These Equipe socks combine a light and breathable fabric made from a combination of nylon, elastane and polypropylene. They have thicker material in the heel area and along the bottom to provide extra durability as well as a shade of extra cushioning.

Some of the names the company uses for the clothing can appear a bit baffling, but there is a logic behind the jumble of letters and number. It’s essentially an abbreviation - once you take a look at the list of what the letters all mean on its website, it starts to make sense. For example, the SS in SS.campionissimoJersey_evo7 simple stands for short sleeve. Simple, huh?

Assos splits its clothing into seasons with its ALS (Assos Layer System) system designed to help you choose the right outfit for your needs, and remove the usual guesswork that can be involved in deciding what to wear before leaving the house. ALS is split into four  key riding seasons with recommended riding temperatures, and it’s all based on the idea of layering, an approach that allows you to easily tailor your outfit to the conditions.

We’ll be testing this clothing over the coming weeks and months and we’ll be publishing full reviews for each garment, so watch out for those. We’ve also got some women’s Assos clothing as well.