No, it's not Batman's new bike, it's the new P5X from Cervélo. The Canadian manufacturer has long been at the cutting edge of bicycle design, and it’s taken things to another level with its stunning new P5X triathlon bike, launched in Hawaii this week ahead of the Kona Ironman at the weekend. The P5X has been designed for triathlon and Ironman only, so no time trials on this one, as the radical frame features those things that the UCI hates, disc brakes.

Cervélo calls the new P5X the fastest, most technologically advanced triathlon bike ever made. It features disc brakes, a first for a triathlon bike, and a radical frame design that has more in common with the Lotus 108 than anything the company has produced before. It’s a bike that has been designed without limitations or restrictions. 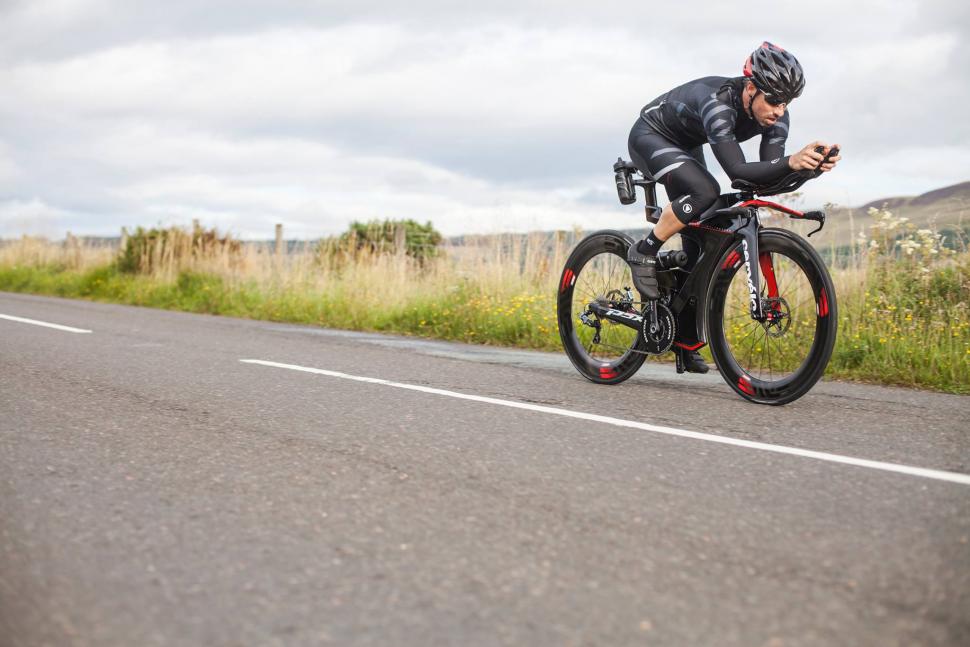 The new P5X has been three years in development and the goal was to create a bike that fully catered for every need of triathletes, whether that’s training or racing. Until now manufacturers and Cervélo with its previous P5 have designed triathlon bikes that can, with a few changes, satisfy the UCI rules and be used for time trials, but with triathlon and Ironman events enforcing less strict rules, Cervélo has shunned tradition and focused fully on the needs of triathletes. So you won’t be seeing this bike at your local time trial or WorldTour time trial events.

“We found that a different approach was needed to improve the entire triathlete experience, not only on race day but also in training and travel,” explained Cervélo Engineering Director Sean McDermott. “From aerodynamically integrated storage to simple and wide-ranging aero bar adjustments, the P5X delivers a complete system that harmoniously addresses speed, fit and usage.”

Aerodynamic improvements were obviously top of the list. It has spent 180-hours in a wind tunnel along and developed some 150 frame iterations before arriving at the bike it has just released. We saw the new Parlee TT bike with disc brakes at Eurobike, and Cervélo has opted for disc brakes with thru-axles and flat mounts. Disc brakes improve safety and boost stiffness, says the company, but it also says the disc brakes offer improved aerodynamics.

Cervélo tells us the new bike is 30g faster than the P5 from +15 to -15 yaw angles in a full Ironman set up, and up to 90g faster at 0 yaw. Here's a graph of the aero performance that Cervélo has released. We'd like a bit more aero data really, but this is all we have to go on at the moment. It's clear that Cervélo is confident the bike is faster, despite the addition of disc brakes, and that does tally with what we're hearing from other manufacturers that are starting to work with disc brakes. The acutal disc brakes might generate more drag, but savings can be made on the rest of the frame to balance things out, or even produce less overall drag. 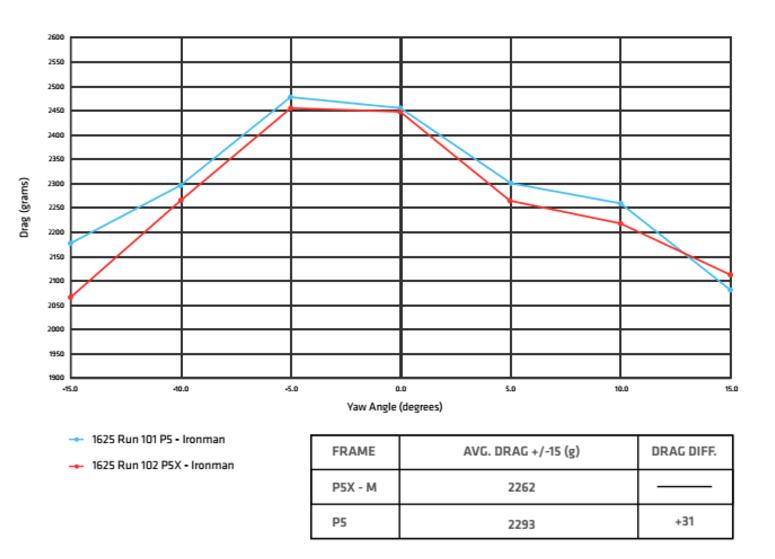 A new split aero bar and fork were developed with Enve Composites, while Cervélo also enlisted the expertise of the late Steve Hed and his company to work on the carbon fibre layup of the frame, where the frame will be manufactured at Minnesota-based HED Cycling.

You can have the best aerodynamic products in the world, but if your position is lousy, you’re not going to benefit. Cervélo has worked on offering micro and macro-adjustability to the fit to make it easy for an athlete to find the optimum position quickly and easily. The P5X features a wide front end fit range with an 112mm sliding stack adjustment and 91mm reach adjustment. The base bar can be flipped providing 0 to 12-degree tilt adjustment. It's available in just four frame sizes; S, M, L and XL.

Triathletes travel a lot, so the P5X can be dissembled simply by removing a couple of bolts, wth the two-piece aero bar folding away.

Triathletes and Ironman competitors also like storage and hydration solutions, so Cervélo has developed a modular storage system that allows a high level of customisation. “Launching the P5X at the Ironman World Championship means a lot to us,” says Antoine Ballon, Cervélo’s Global Marketing Director. “Chrissie Wellington made history here in 2007 and 2008 by claiming victory on one of our first tri bikes, and we have continued to make history here by leading the Kona Bike Count for 11 consecutive years and counting. Designed with nothing but the triathlete in mind, this badass ride represents the pinnacle of our systematic, engineering-first approach. The P5X is a personal best for us, and we know it will help athletes achieve their own personal best.”

The P5X is available in two builds. At the top is SRAM RED eTap and ENVE 7.8 wheels and will cost $15,000. A Ultegra Di2, Rotor crank and Hed 6.9 wheelset build will cost $11,000 USD. The bikes will only be sold at select dealers and we’ve no word on UK pricing or availability yet.

If that’s too rich you for, you can always ride the new bike virtually in Zwift.

Why not call it the P6? Cervélo says it isn’t meant to replace the current P5, which was designed for both time trials and triathlon, and the X appended to the name calls for its specificity. More at https://p5x.cervelo.com/

So what do you think?