Mike Hall, founder of the Transcontinental Race and winner of the Tour Divide, is heading to Australia to compete in the India Pacific Wheel Race this weekend, an unsupported solo 5,300km monster of an event.

Kicking off this weekend, the race starts in Fremantle, Western Australia and finishes at the iconic Sydney Opera House. Far from simply taking the most direct route from one coast to another, the organisers have planned a route that has four distinct sections. There’s the desert including the Nullarbor Plain, the rolling hills of the South Australia wine district, the Great Ocean Road and the Australian Alps, ensuring there are plenty of challenges along the way. 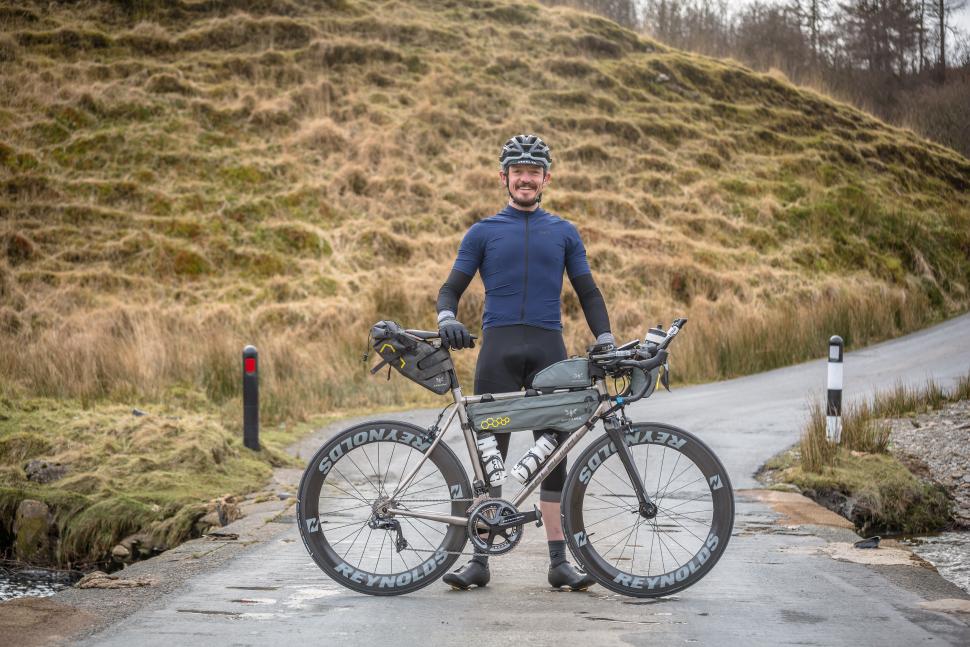 It won’t just be the terrain and distance that will make it a tough and demanding race. Mike will face stiff competition from other endurance cycling legends, including Kristoff Allegaert, three times winner of Transcontinental; Jesse Carlsson, a former winner of the Trans Am in 2015 and Sarah Hammond winner of the women’s trans Am in 2015.

Mike Hall is sponsored by Kinesis Bikes and will be riding the latest GranFondo Ti but instead of using disc brakes as he has done on previous endurance record attempts, he’s using the rim brake version of the GF Ti. He sticks with a tried-and-tested Shimano Di2 groupset, but he’s got the latest Dura-Ace R9150 which even most of the professional cycling teams don’t have yet. Mike likes to utilise the time trial extension bar shifters so he can shift gears while tucked down over the front of the bike.

From the same Shimano stable comes a full sweep of PRO finishing kit, so that’s the Falcon saddle, handlebar and stem. There’s no bar tape on the handlebars, we’ll presume that’s simply because he didn’t have time to finish the build before the photo shoot was arranged. We hope. Can’t imagine riding that distance without bar tape.

Opting for an aerodynamic advantage based on “extensive research of the route with close attention paid to the predicted prevailing headwinds” Mike has chosen to seek as much of an aerodynamic benefit as possible. For that reason, he has chosen Reynolds Aero 65 wheels, a deep section carbon fibre clincher rim to which he has fitted Panaracer Race Evo Tubeless tyres. The front wheel is laced up with an SP PD-8X dynamo hub to provide lighting and battery charging duties.

Apidura supply the bikepacking bags in which he’ll carry a minimal amount of kit and equipment. Just the essentials we’d presume.

Before Mike set off for Australia, the guys at Kinesis sat down with Mike and aimed a few questions at him.

I’ve raced in the US the last few times and bikepacking has been strong there for a while with a few key events like Tour Divide and now Trans Am.  There is a strong distance riding scene in Europe with a long history of Randonnuering and Audax and now Transcontinental is doing well. Australia has a good history of overland records but they have become a little forgotten.

Jesse (Carlsson) had an aim to create a flagship event and route for Australia in unsupported racing and I was excited by that and wanted to support it. He has also made great efforts to get certain riders there at the same time to provide a very strong field and an interesting race both to watch and be a part of - which couldn’t necessarily happen in other races at other times of the year.  Really I saw this race had great potential to help the long-distance self-supported scene as a whole. 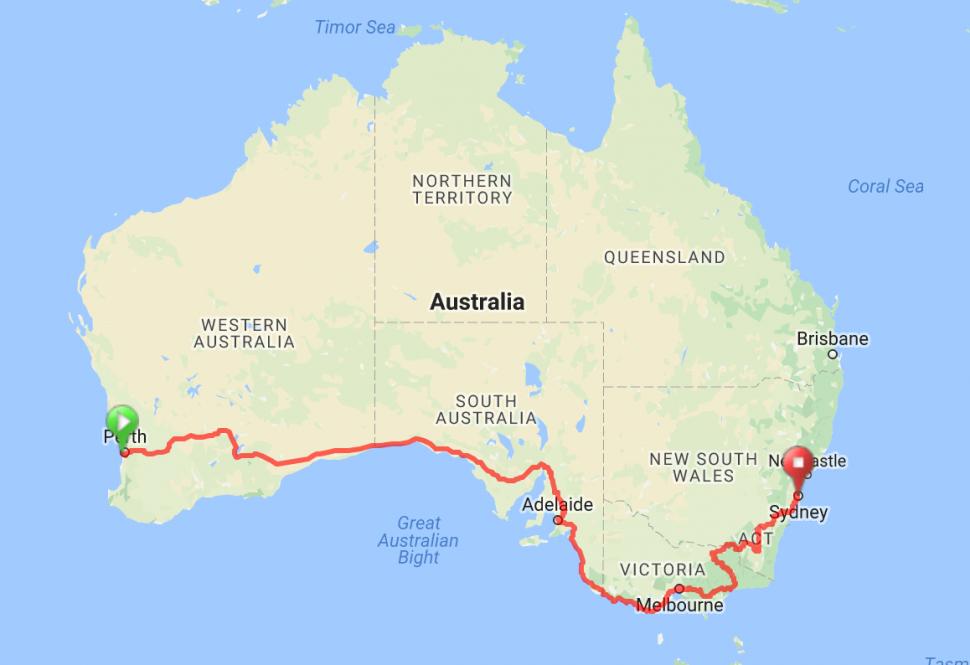 What are the tools of your long distance trade?

For the Indy Pac, I have a Grandfondo Ti V3 with conventional road calliper brakes from TRP and I’m rolling on Reynolds Aero 65 wheels.  The front is built around the newly revised SP PD 8x dynamo hub.  Shimano provides all the go with a Di2 Groupset.  My favourite feature of Di2 is the bar extension shifters which are so flexible.

Shimano also provides all my contact points with their PRO components.  The Falcon saddle has been good to me in Trans Am and Tour Divide.  For Luggage, I will have Apidura bags and to fix everything a small, light but very capable set of Lezyne tools.

What unique training have you been doing?

I wouldn’t say it's unique as such but my training doesn’t necessarily follow the conventional trends, it’s more old-school if anything but I like to think about things, come up with a few ideas and try things out.  Curiosity keeps me motivated and I very much like to keep things down to feel.  I haven’t used a power meter (yet) and haven’t used a heart rate monitor for about 10 years.  I haven’t ever had a coach. [We think Mike is fuelled mainly on pies and Yorkshire tea]. 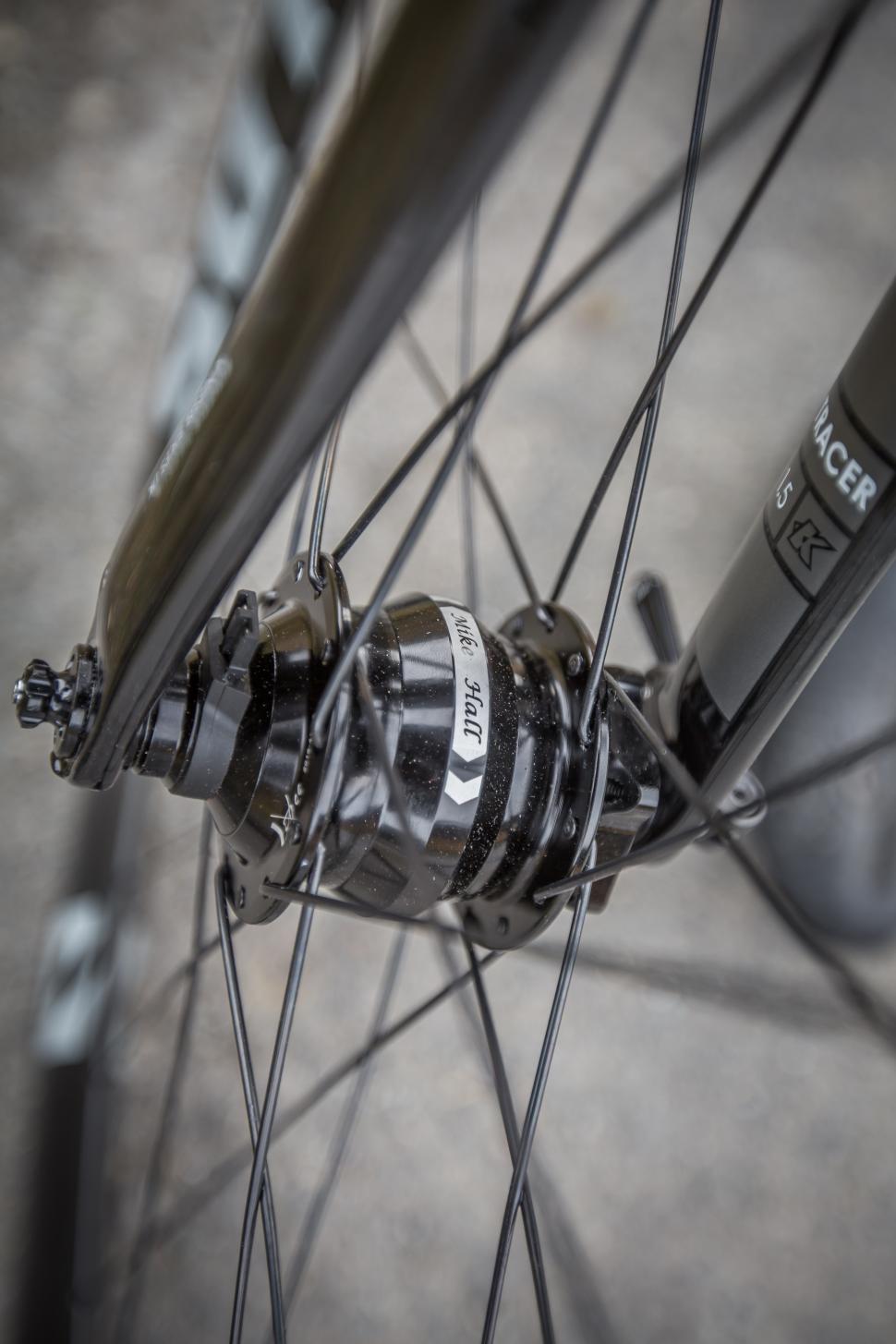 What kit will you be wearing?

I’ll be wearing PEdAL ED clothing, Natsu bib shorts (which are the only bib shorts I have finished an ultra distance event in and then continued to use, and a Shibuya Jersey which is about the nicest jersey I’ve ever worn.  Then I’ll just have a set of arm and leg warmers and a Nachi Jacket for colder weather.

The race will start on 18th March and you can find out more about the race, plus all the tracking information, right here www.indianpacificwheelrace.com

1
Noel Gallagher says the only downside of cycling is "the f***ing helmet"
2
Near Miss of the Day 451: Driver flirts with head-on collision to get to red light slightly sooner
3
Canadian woman who boasted of drunk driving before killing cyclist is again jailed for drunk driving
4
Fabio Jakobsen out of coma as team mulls legal action against Dylan Groenewegen
5
Near Miss of the Day 450: Crap driving, embarrassed accelerating away
6
Updated: UCI condemns Dylan Groenewegen as Fabio Jakobsen fights for his life after horrific Tour de Pologne crash
7
Fabio Jakobsen “stable” after overnight surgery following horrific Tour de Pologne crash
8
Woman injured by hit-and-run driver while cycling with daughter, aged seven