This fitness app by the indoor trainer and GPS specialists is designed to offer detailed functionality and a simple interface on your phone...
by Jack Sexty

The Wahoo Fitness workout tracker is a general fitness app that can be used for running and other activities as well as cycling, and can be used with your phone without needing one of Wahoo's devices to take advantage. That said, it really comes into its own when paired with Wahoo accessories such as their Tickr heart rate monitor, speed and cadence sensors, meaning you can have pretty comprehensive data from your training session with just your phone as a head unit. You can upload your data to a multitude of third-party apps such as Strava, Training Peaks and MapMyFitness, and also save them as GPX files to dropbox anywhere you like. The app has fully comprehensive power data when used with an ANT+ power meter, including watts, avg. power, nPower, iFactor and TSS measurements. 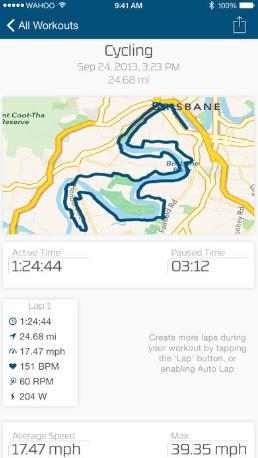 Like Wahoo's Elemnt computers the app has an optional auto-pause function, useful for making sure your average speed doesn't appear lower when it comes to that all-important Strava upload.

There is a fully customisable audio announcement feature on the app, allowing you to get voice prompts at intervals on your distance, time, pace and calories burned amongst other things. You can select from up to 13 data screens, and the app will ask you your age, weight and height to make sure your data is personalised to you. There's also in-app GPS so you don't get lost, which always helps.

Of course, this is the only Wahoo Fitness general GPS tracking app! It syncs seamlessly with all Wahoo accessories, and the customisable voice audio announcements are the most detailed we've seen in a free fitness app. The Wahoo Fitness app is free, and available on both iTunes and Android. You can also check out Wahoo's other apps here, including '7 minute workout' and an app specifically for their Elemnt bike computers.