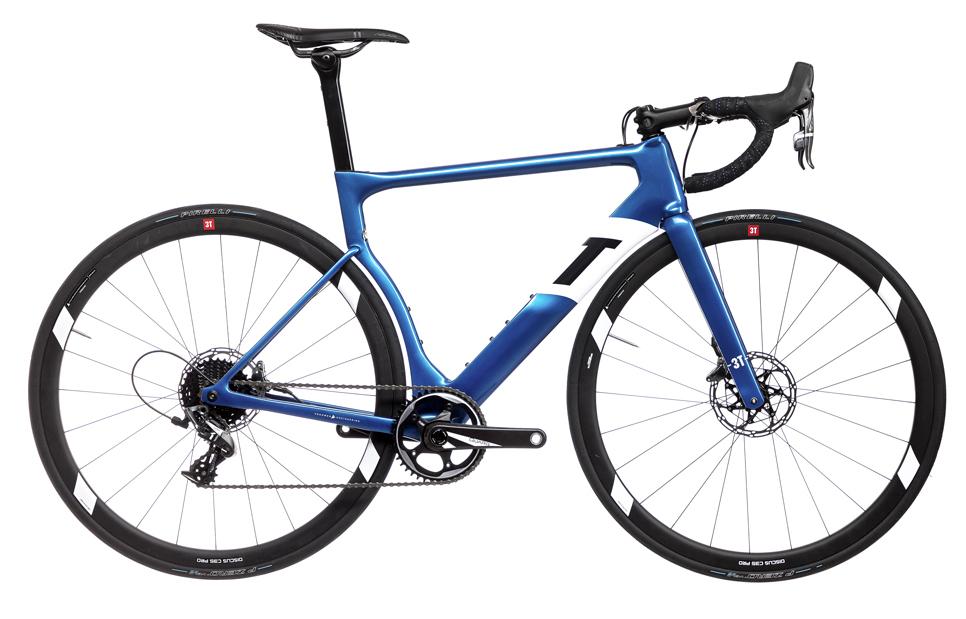 We were highly impressed with the radical new 3T Strada Team last year, so much so that it clinched two gongs in our annual celebration of the best bikes we’ve tested in the past year, both Superbike of the Year and the overall Bike of the Year awards.

The only real complaint was the big price tag. At £3,700 for the frameset, it ain’t cheap and you need to factor in nearly as much again for all the parts to assemble a complete bike. It’s worth remembering that 3T isn’t a big bike company like Specialized or Trek so probably doesn’t have the economies of scale to help bring the price down, and cutting-edge tech, due to all the development time, usually comes at a significant price.

Despite this, 3T is keen to make the bike as accessible as possible, and the Strada Pro is a proper complete bike with a SRAM Force 1 groupset and 3T wheels and parts for just over a £1,000 more than the Team frame costs.

On the surface, apart from the new blue paint finish, the frame and fork are identical but differences in the carbon layup help to bring the price down a bit, though the weight has crept up by 130g. SRAM is the only company offering a dedicated 1x groupset so it’s top-end Force 1 is an obvious choice and on this bike pairs a 50t chainring with an 11-36t cassette. The SRAM Quarq crankset is power meter ready, so you can upgrade the spider to add power at a later date.

As you probably know the Strada is designed around wide tyres, 28mm being the optimum width. The Strada Pro is specced with the new Pirelli PZero Velo 25mm tyres. Why 25? That’s because the wide rims actually stretch the 25mm tyres out to 28mm, so you get the desired width with a little weight saving. It’s actually a trick some of the road.cc staff have been doing for a couple of years and is a good benefit of wide rims.

When I tested the Strada last year with actual 28mm tyres, the wide Enve rims ballooned them out closer to 31mm. It pays to consider the impact a wide rim has on tyre width when speccing wider tyres.

To say the 3T Strada has generated a lot of debate would be an understatement. It was a bike we were genuinely impressed with, and yes there are some compromises with gear selection, but on the whole, the simplicity, speed and handling of the bike overcame those gearing niggles that in general real-world riding isn’t as big a problem, if at all, that you might imagine it would be.

The man behind the Strada, Gerard Vroomen, admits in a blog post about the new Strada Pro that he was worried if the bike was a step too far but adds that he’s happy if 50% of the people hate a new design.

“Any less, and the bike is too ordinary. Any more, and there are too few people left to buy it. Well, when we launched the Strada, it certainly felt like WAY more than 50% hated it,” he explains.

Despite that, the Strada has been a sales success. It reveals it had to triple production of the original Strada in January to keep up with the demand from customers clearly in favour with the unique design.

The development of the Strada Pro, a complete bike at a more affordable price, was always part of the plan says Vroomen, but delayed due to the demand for the original Team frameset.

“We believe so strongly in the Strada that we always wanted to offer it as a complete bike at a more affordable price. We realise we’re not Giant, Trek or Specialized, we don’t churn out frames by the millions, but within our capabilities and without watering down the performance of our bikes at all, we do want to make them available to as many people as possible,” he says.

A year on from that launch, the idea of a disc-equipped, aerodynamic road bike with a dedicated 1x design doesn’t seem so far-fetched. True, it’s not for everyone, it probably never will be, but with a pro team, Aqua Blue Sport, currently racing the bike and helping in the development of future revisions, it’s fair to say the Strada is here to stay.

Can we expect to see more dedicated 1x road bikes in the future? I think it’s reasonable to expect this category of road bike to only grow in the future.

You can buy the 3T Strada Pro from the retailers below: