Italian sprinter Elia Viviani got his Giro d’Italia campaign off to a storming start with two successive stage victories, winning both sprint finishes aboard a Specialized Venge ViAS with disc brakes. We don’t have any photos of that bike to share with you yet, but we do have photos of the Tarmac SL6 Disc he has switched to for all the stages since those victories.

Viviani chooses the aerodynamic Venge ViAS for sprint finishes, but for all the other stages he opts for the lower weight of the Tarmac SL6. This is the latest generation in a long line of Tarmac race bikes and was launched at the Tour de France last year. As we’ve covered extensively in this review, the bike is massively lighter than the old model, as well as being more aerodynamic. 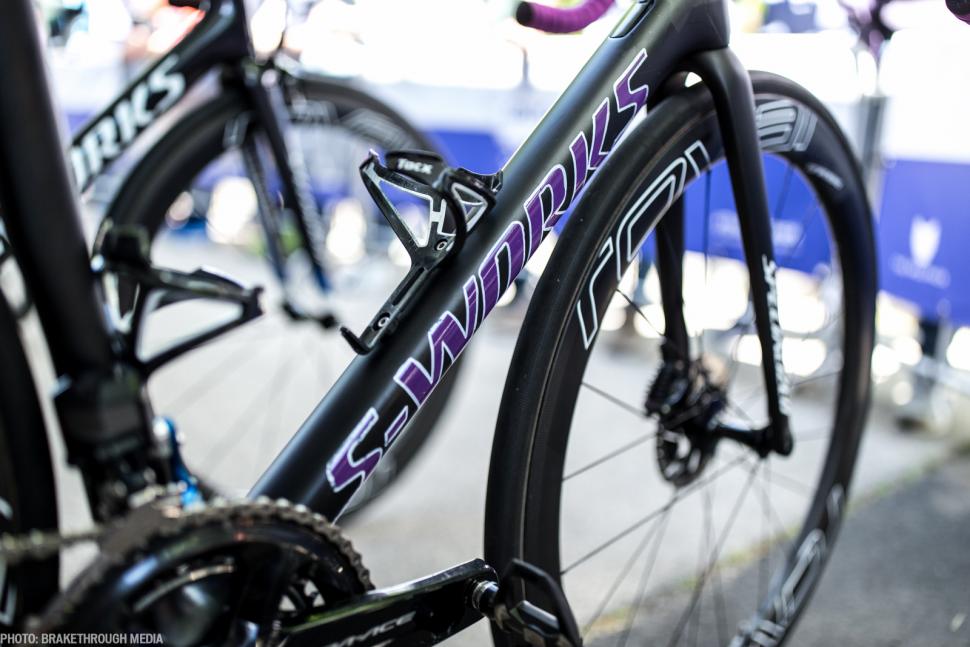 Elia Viviani clearly likes an aggressive setup that ensures he is as aerodynamic as possible. His front-end is slammed!  That’s a 130mm negative rise PRO Vibe stem with no spacers anywhere in sight.

It clamps a Pro Vibe Aero carbon handlebar into place with a K-Edge out-front computer mount squeezed onto the handlebar for keeping track of his heart rate, watts and distance. A minimal amount of Supacaz bar tape wraps the drops - he won’t be doing much cruising along on the tops. 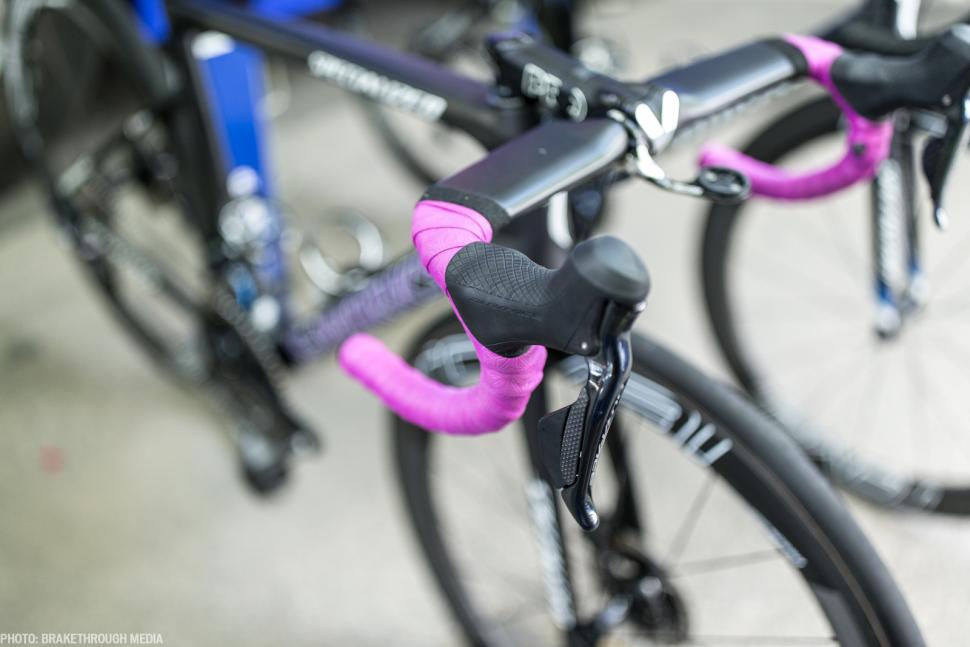 A shame to see the Di2 junction box strapped to the stem and not hidden in the compartment in the downtube designed specifically for this, or even in the end of the handlebars. Maybe it’s easier for the mechanics this way? 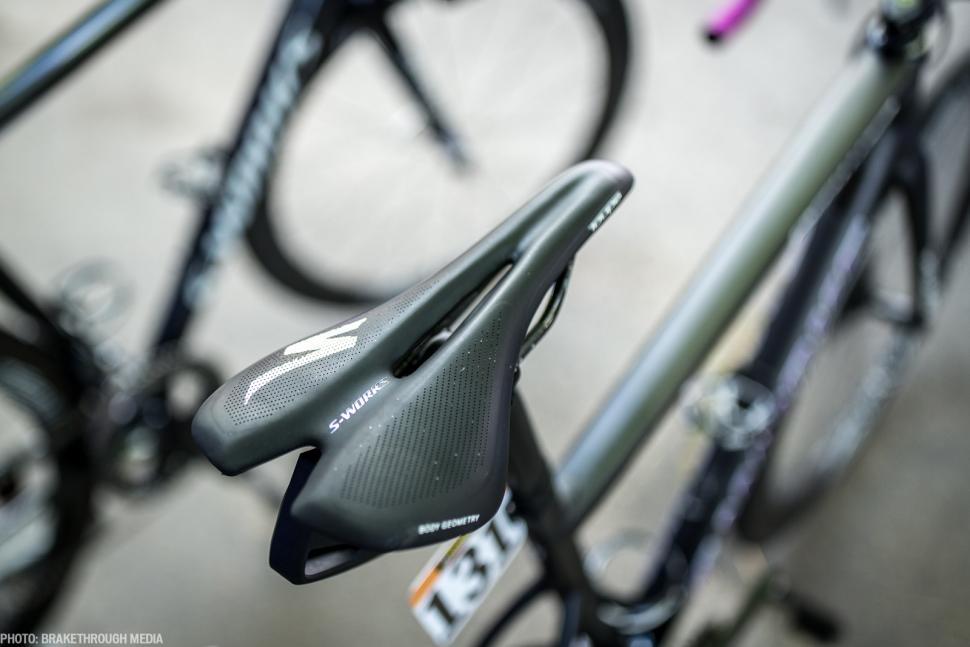 The Specialized sponsorship extends to the Roval CLX 50 wheels, with the hubs spinning on CeramicSpeed bearings, and all wrapped with S-Works Turbo tyres. There’s also a Specialized Toupe saddle on a Specialized carbon seatpost, custom designed for the Tarmac frame, with an internal seatpost clamp.

A full Shimano Dura-Ace R9170 groupset with a Specialized power meter (read more about that here) takes care of gear changing and braking duties. It’s the most common sight in the professional peloton, Shimano really has got the WorldTour largely to itself at the moment. Will the pendulum ever swing back towards SRAM or Campagnolo, or maybe another groupset rival?

What’s interesting about Elia Viviani’s bike is, of course, that fact that he has chosen disc brakes. But has he “chosen” disc brakes or, as the cynics will likely point out, been forced to ride them by sponsor pressure? We’ll likely never know. 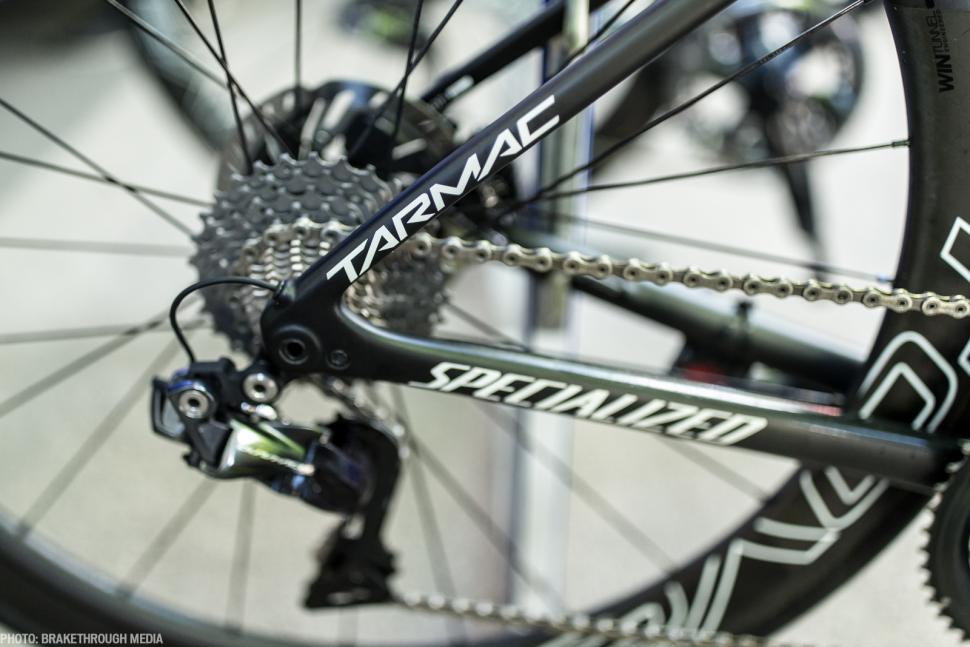 What is clear is that it seems to hardly matter to Viviani. He’s won two stages and has continued riding some quite hilly stages on a disc-equipped bike. Of course, he would have won on a bike with rim brakes, there’s no doubting his raw speed and fantastic timing, but neither have the disc brakes caused a performance handicap. None that we can see anyway.

There has been a lot of often quite heated forum debate about disc brakes since they started appearing on race bikes and in the professional peloton, that they weren’t needed by the pros and the differences in braking power would cause crashes, wheel changes would be slow and sharp rotor edges will slice flesh. Was it all much ado about nothing? We’re still a long long way from widespread adoption if that ever happens, but it’s clear disc brakes are starting to appear in the professional peloton with more frequency and proposed hurdles put forth by many don’t appear to be causing the problems many thought they would.

How do you feel about disc brakes in the professional peloton? Do you even care?