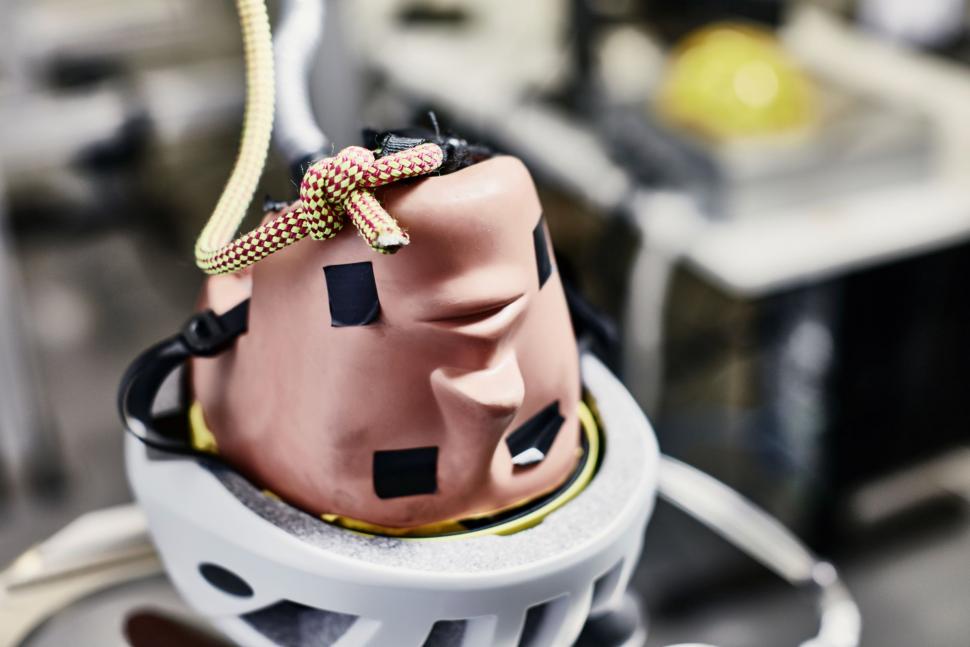 MIPS says that its preliminary test results do not substantiate the safety claims made by Bontrager about its new WaveCel helmets.

Update: Bontrager now says that “consumers can decide for themselves which products fit their particular needs based on the data and information available to them.”

[If you read this story yesterday, skip to 'Update' down at the bottom of the page for the new stuff.]

Okay, so there's a storm a-brewin' in the helmet world. Essentially, ingredient brand MIPS (which stands for Multi-directional Impact Protection System) has been around for a few years now supplying helmet manufacturers with technology that's designed to lessen the rotational motion associated with brain injuries such as diffuse axonal injury, subdural hematoma, and concussion.

Earlier this week, Trek sub-brand Bontrager revealed its new WaveCel helmets that feature a collapsible cellular material that is designed to do something similar.

"On impact, the layers of the WaveCel material move independently and flex until the cell walls crumple and then glide, actively absorbing direct and rotational energy and redirecting it away from your head," says Bontrager.

So that's the distilled version of where we were up to on Tuesday. We have a full feature that tells you everything about MIPS and you can find out all about Bontrager's new WaveCel helmets here.

Now MIPS says, "Preliminary test results of WaveCel helmets by MIPS cannot substantiate these claims. While further testing is warranted, MIPS cannot see that the helmets perform in a way that the claims Bontrager/WaveCel makes in the comparison between WaveCel and other helmets/technologies.

"MIPS’ position on evaluating the possibility of a concussion resulting from a crash is that it is a highly variable event and unique to the individual impact and rider physiology. No two crashes are the same and no two people are the same, so the risk of concussion is a near-impossible claim to make. However, rotational motion itself can be measured objectively, so that is the metric MIPS can actually report and address."

Once additional testing is completed, MIPS intends to share the data with the public.

MIPS says it is pleased that more helmet brands are seeking to deal with rotational motion in the event of a crash, but is concerned that there is no industry-wide standard from third party testing organisations for measuring this – which is something we reported on earlier in the month.

“We at MIPS have conducted more than 22,000 tests and we know that not all helmets are equally safe, not even the ones that claim to address rotational motion”, says Johan Thiel, CEO of MIPS. “While we hope from a consumer standpoint that Bontrager’s claims are accurate, we are curious to see how it lives up to the tests conducted in our lab.”

“We are a company of scientists, so we’re approaching this in the spirit of collaboration inherent to scientific research. If together we can make cycling safer for riders, then we will have honoured our mission to make the safest helmets possible.”

Trek/Bontrager has now responded with this statement: “We believe that slip liners [a MIPS system is a slip liner - Ed] are a good technology that provide a real benefit to riders. Having partnered with MIPS for a number of years, we have brought many products featuring MIPS technology to market. We also believe that there is room for innovation in rider safety. Trek offers helmets with WaveCel, MIPS and standard technology. Consumers can decide for themselves which products fit their particular needs based on the data and information available to them.”

Okay, so that could be seen as quite a conciliatory approach were it not for the fact that MIPS hasn't yet published its data, until further testing is complete.

The situation now is that you have Trek/Bontrager/WaveCel data saying that its own technology provides certain safety benefits, and MIPS, which produces rival systems, saying that its preliminary test results do not substantiate those safety claims, and promising to publish its data in due course.

The only testing from neither of these parties has come from Virginia Tech.

If you'd like to check out the full paper relating to WaveCel, Evaluation of a novel bicycle helmet concept in oblique impact testing, written by researchers including two of its co-inventors, you can read it here.

You can check out the Virginia Tech methodology and gradings here. ​