Waaaaaay back in 2014 GT Bicycles launched one of the first carbon fibre gravel and adventure bikes with the Grade, and for 2020 it has launched a brand new version, keeping everything that was good about the original but increasing the tyre clearance, improving compliance, ramping up versatility and introducing adjustable geometry for the first time.

Key Details at a Glance

The timing of the original Grade launch was bang on the money, a bit of luck and crystal ball gazing by the US brand. Gravel racing was becoming popular in the US and starting to spread its influence far and wide, and GT saw an opportunity to bring its mountain bike experience to the drop bar market with a bike designed to be highly versatile and capable on any terrain. It’s fair to say it went on to be a huge success, and it’s a bike that has always reviewed well in the various incarnations we’ve tested.

“GT went rogue back in 2015 when we introduced the first Grade. GT was at the forefront of this emerging gravel scene and became the first brand to develop disc brake equipped carbon gravel bikes,” said Patrick Kaye, GT Senior Product Manager. “The increased performance and added adaptability that we’ve engineered into the new Grade meets the needs of today’s gravel and adventure rider.” 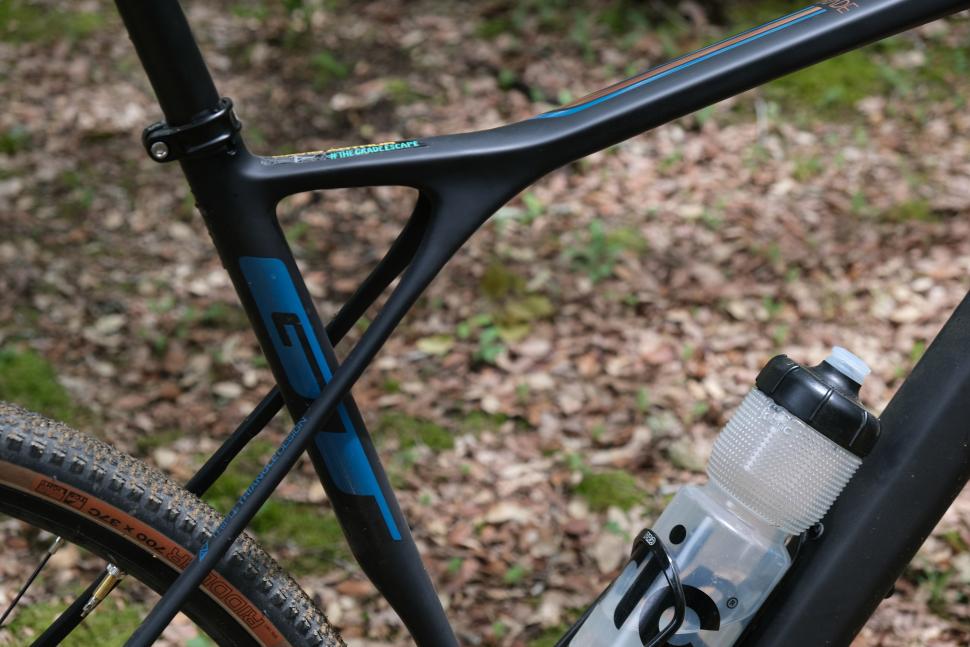 In updating the Grade the company hasn’t stepped too far away from the design of the original bike. Instead of a radical redesign, it has kept the same formula and underlying design but made numerous changes aimed at increasing its capability, comfort and versatility.

The iconic Triple Triangle, a key feature of GT mountain bikes since it was first used on the Zaskar in 1992, remains but in a clear move to increase the seated comfort, the pencil thin seatstays have now been separated (or decoupled if you like, but don’t tell Trek) from the seat tube, which itself has been shaped to allow it to flex more throughout its length. 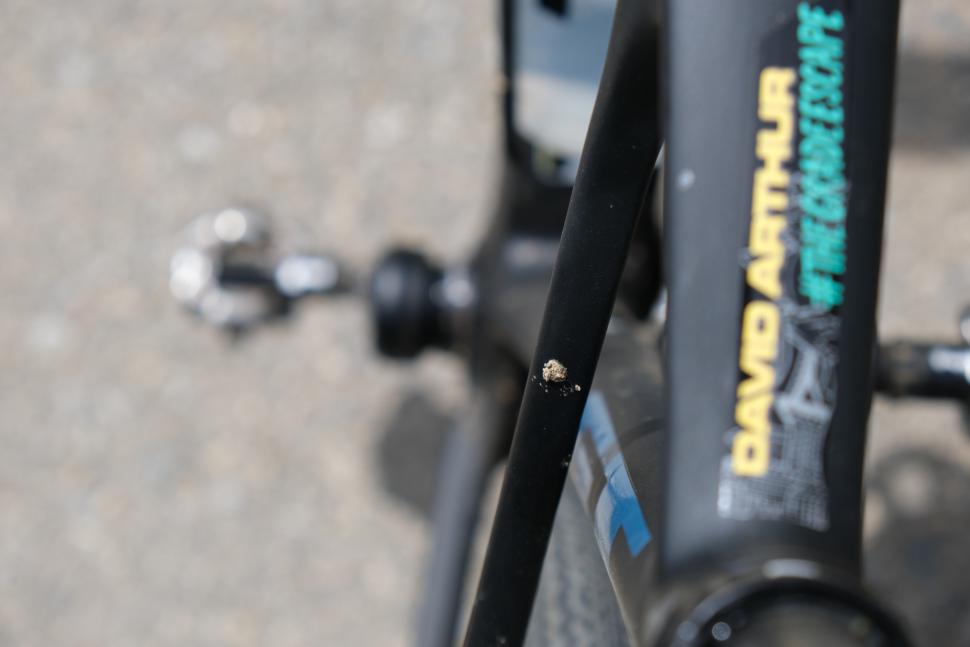 Together, these two changes have contributed to a claimed 20% increase in compliance compared to the old Grade. GT calls this technology Floating Stays, but it uses the same skinny seat stays made from wrapping carbon fibre around a solid glass fibre core. You can actually see the seatpost flexing back and forth, both when you’re riding behind another cyclist on a Grade or more simply by leaning very heavily on the saddle. There is a 280lb rider weight limit, however. The gravel and adventure market has blossomed and with its growth has been an increase in acceptable tyre widths. The new Grade ups the tyre clearance to 42mm tyres front and rear. It’s not as progressive as some other bikes we could name but GT feels it hits the sweet spot for most of its customers. As is often the case, you could probably go a bit wider depending on your exact tyre and rim width combinations. The Grade will also accept 650b x 47mm tyres. The Grade uses 12mm thru-axles and 160mm disc rotors front and rear with flat mount calipers. Furthermore, the rotors can be sized up to 180mm for those riders or occasions when beefier braking is required, say if you’re bikepacking through the mountains. Cables and the rear brake hose are routed externally along the bottom of the down tube, and there’s internal routing for Di2 and dropper posts.

The original Grade’s geometry centred around a long wheelbase, slack head angle, low bottom bracket and a tall headtube. The new Grade has been slightly revised, with a slightly longer wheelbase and a lower stack than before. A size 55cm has a 72.3-degree head angle and 73-degree seat angle, 1,055mm wheelbase, 445mm chainstays, 73mm bottom bracket drop and a 590mm stack and 394mm reach.

Of more interest is the new Flip Chip. It’s a chip in the fork dropout that lets you adjust the fork offset by up to 15mm, between 55 and 70mm to alter the trail to tune the ride characteristic to suit rider preference and whether you’re riding laden or unladen.

The Flip Chip is an intriguing feature for sure. We’ve seen such geometry adjustments before obviously, most notably Rondo, but it’s certainly not commonplace. But where Rondo uses the flip chip to change the stack and reach with only a minor impact on the fork offset, GT has employed it to adjust the fork trail provide different handling. The default setting is a regular 55mm offset (57mm trail), but you can increase it to 70mm which shortens the trail (39mm). The difference is in how the bike steers and responds to your inputs, with the shorter trail resulting in a faster steering and more agile bike. GT intends this to be a setting to be used when the Grade is fully laden with luggage and water bottles, offsetting the extra weight by speeding up the handling.

“The 55 mm offset is perfect for gravel race days while the 70 mm offset or “low trail” setting is ideal when the Grade is loaded up with cargo for a bike packing adventure,” explains GT.

It’s not a trailside adjustment, but rather you choose the offset to suit the requirements of your riding, based on the terrain, wheelsize and how laden with baggage your bike is. Thorough in-depth testing will be required to assess the benefits of this new feature. This new fork will only be used on higher-end models, lower models will use a carbon fork with a fixed 55mm offset.

There are six sizes from 44 to 62cm and GT has evened out the stack and reach across the size range to provide a smoother progression. 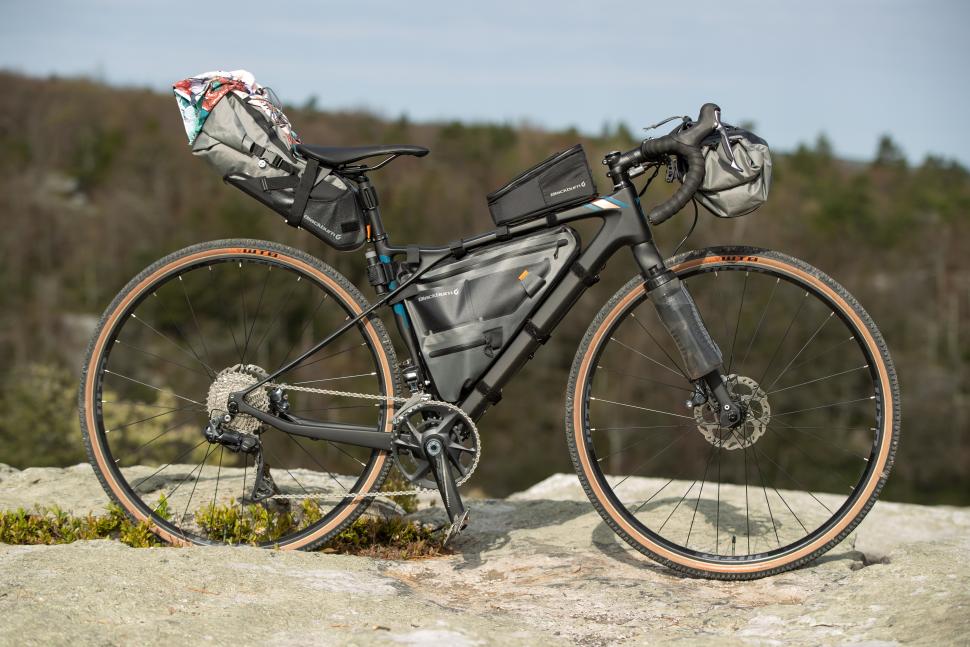 The original Grade was a versatile bike, the new Grade takes the versatility to another level. There are the same hidden mudguard eyelets with removable mudguard mounts to maintain the clean lines and clearance when not using ‘guards, and there are a plethora of mounts for attaching lots of water bottles with the carbon fork compatible with Anything mounts for racks and water bottle cages. The alloy Grade even has water bottle mounts on the seatstays for those epic distance rides when you need to lug a lot of water with you.

Girona was the launch venue for the new Grade, a well-known hub for pro cyclists but hiding miles of high-quality trails in the forests surrounding the historic city an hour’s drive from bustling Barcelona. I was only provided a couple of hours on the new bike so far from enough time to form a solid opinion of the new bike, but first impressions are that GT has retained all the key qualities of the original Grade whilst managing to improve it in key areas.

The ride is impressively smooth and calm, with a noticeable increase in seated comfort when riding over rocks and gravel of dried out river beds and tackling roots on tree-lined trails. You can feel the saddle deflecting underneath you when hitting a bigger hole or bump, and also see it moving on another rider’s bike when you’re following them. It’s also a very stable and easy bike to ride. The length of the bike and the head angle gives relaxed steering that makes it a breeze and a joy to carve the Grade through twisting singletrack, drifting the back wheel through tighter turns on the dusty gravel. It passes the riding no-handed test with flying colours.

I didn’t get the chance to experiment with the Flip Chip adjustment, riding the Grade in the default 55mm fork offset setting which provided very predictable handling that threw up no surprises on the trails we were being guided by local riders. 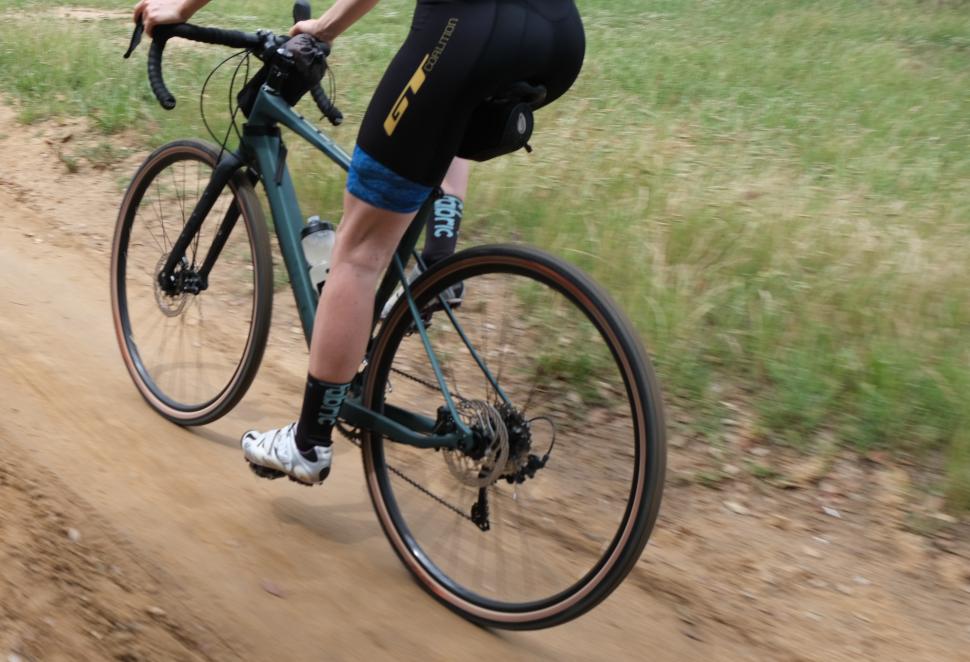 When I rode the original Grade in Utah back in 2014, I summed it up by saying: “The Grade handles any terrain with aplomb, isn’t fazed by rough terrain and whizzes along the smoother stuff as quickly as any road bike. That you can fit mudguards and racks boosts it versatility immensely, making it a bike that can comfortably replace three or four dedicated purpose bikes. It’s well suited to the recreational cyclist who cycles for fun or transportation, rather than to those who count segments.” 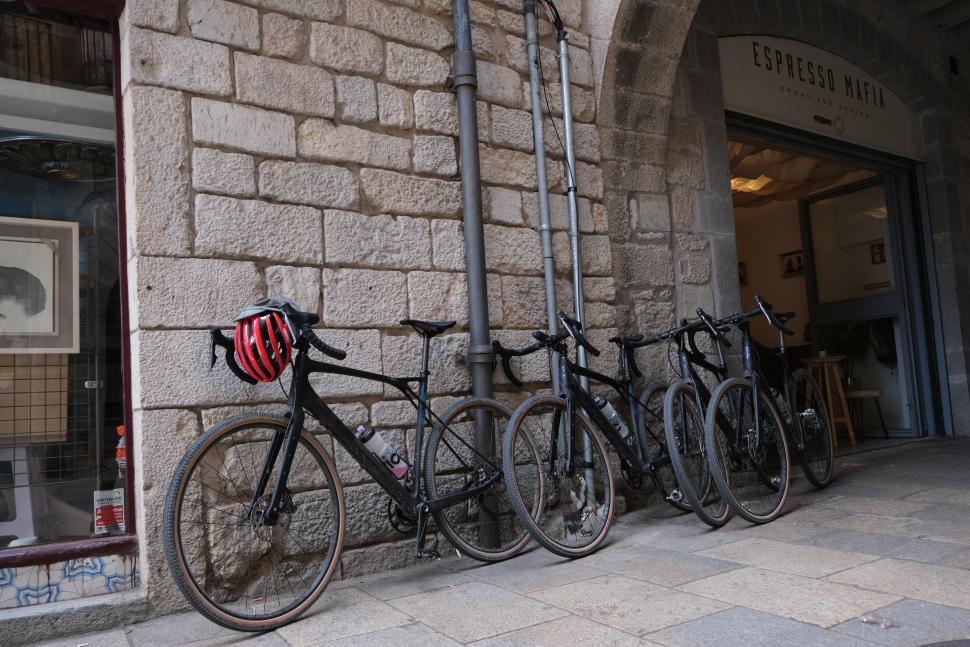 My feelings with the new Grade are little different, but it’s clear the comfort has been increased and versatility has been taken to another level ensuring it’ll appeal to people wanting to plan an adventure bikepacking trip with all the luggage and bottles they’ll need, whilst still appealing to people who want a rugged and comfortable bike for everything from normal weekend rides to daily commuting.

How much will it cost?

There will be five models of Grade to choose from, priced from £1,000 to £3,900 with two alloy bikes and three carbon bikes. 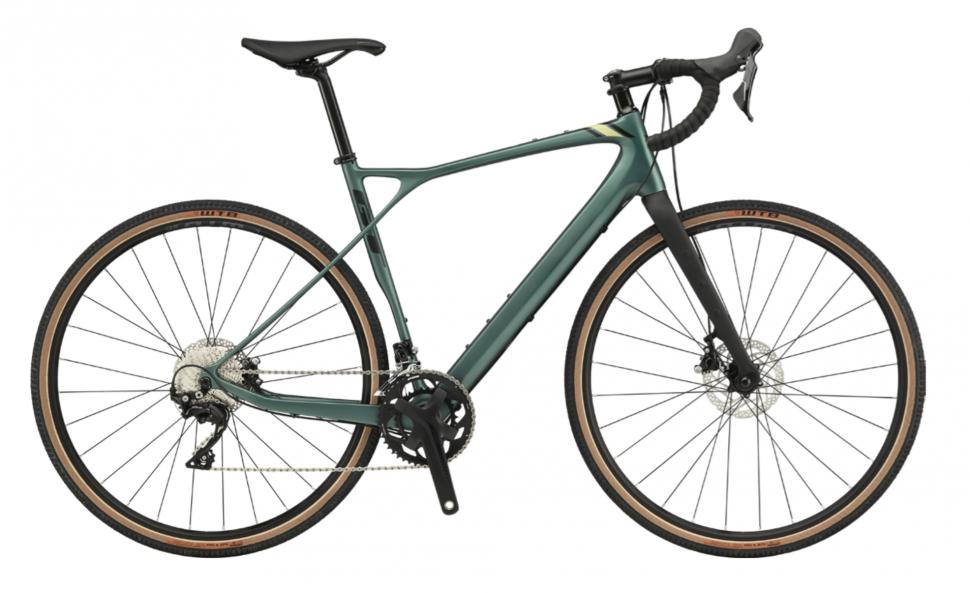 The Grade Carbon Expert (£2,500 ) steps down to a Shimano 105 groupset with an FSA Omega Adventure 46/30t chainset and the same 37mm wide WTB Riddler tyres. 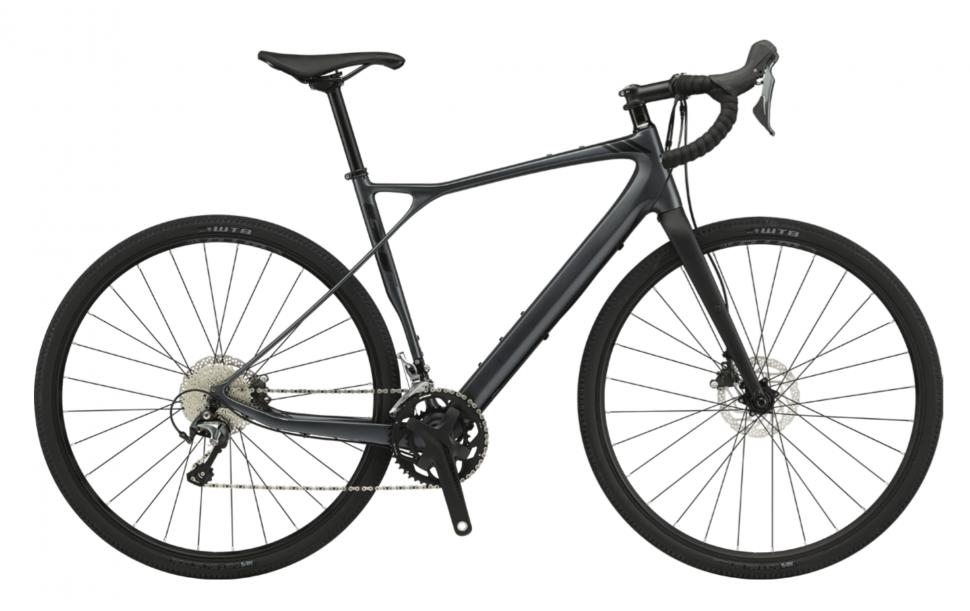 The Grade Expert (£1,500) combines an aluminium frame and carbon fork with a Shimano 105 groupset with WTB Riddler tyres. The cheapest Grade is the Grade Elite (£1,000) with a Shimano Claris groupset, a SunRace 11-34t cassette and an FSA Tempo Adventure 48/32t chainset and the 37mm WTB Riddler tyres.

The Flip Chip and Anything compatible fork is only a feature on the top two models, the three models below those use a carbon fork with a fixed 55mm offset and just pannier and mudguard compatibility.

All bikes will be specced with GT’s new aluminium DropTune handlebar which features a 16-degree flare. There are carbon seatposts on the top-end models along with Fabric Scoop saddles. WTB’s excellent Riddler tyre in 37mm width is used across the range which is tubeless-ready.