This eye-catching orange and black number is the new Pinarello Prince FX Disc that has just arrived for test here at road.cc. Let's take a quick look before reviewer Stu arrives to whisk it away.

We reviewed the rim brake version of the Prince FX earlier in the year and the verdict was: "A beautiful bike to ride with great race-inspired handling, if you can get your head around the price." 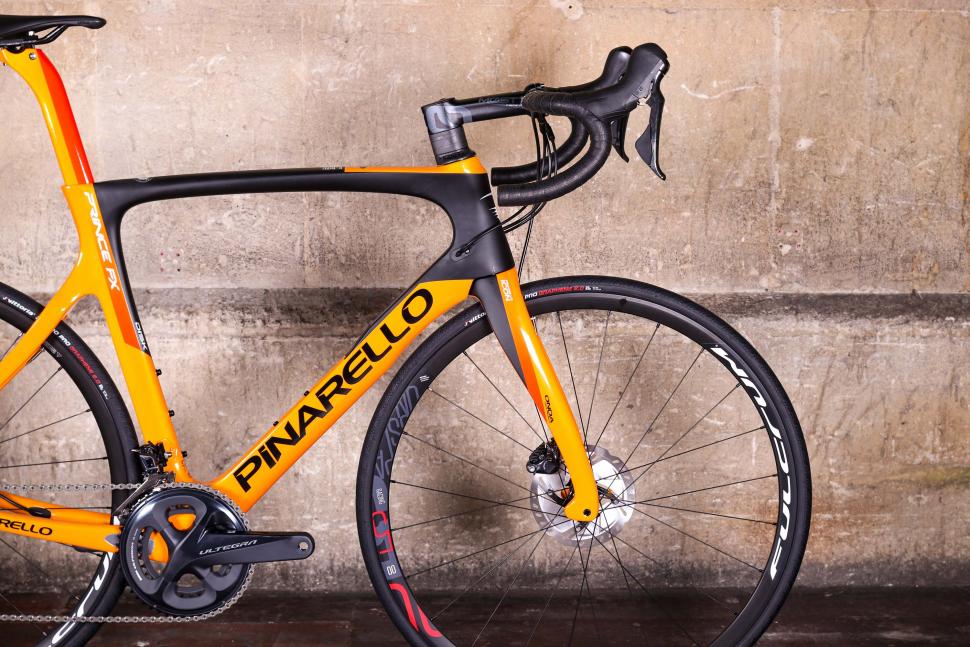 That one was £5,000. What we have here is the disc brake version in a very similar build with a £5,500 price tag. Oh, and if the Tigger-esque finish doesn't do it for you, the Prince FX Disc is available in several other colour options.

The Prince FX was essentially introduced to bridge the gap between the Prince and the Dogma in Pinarello's range, the idea being to provide a high-end performance but at a lower price than you have to pay for a bike that has been ridden to multiple Tour de France wins. 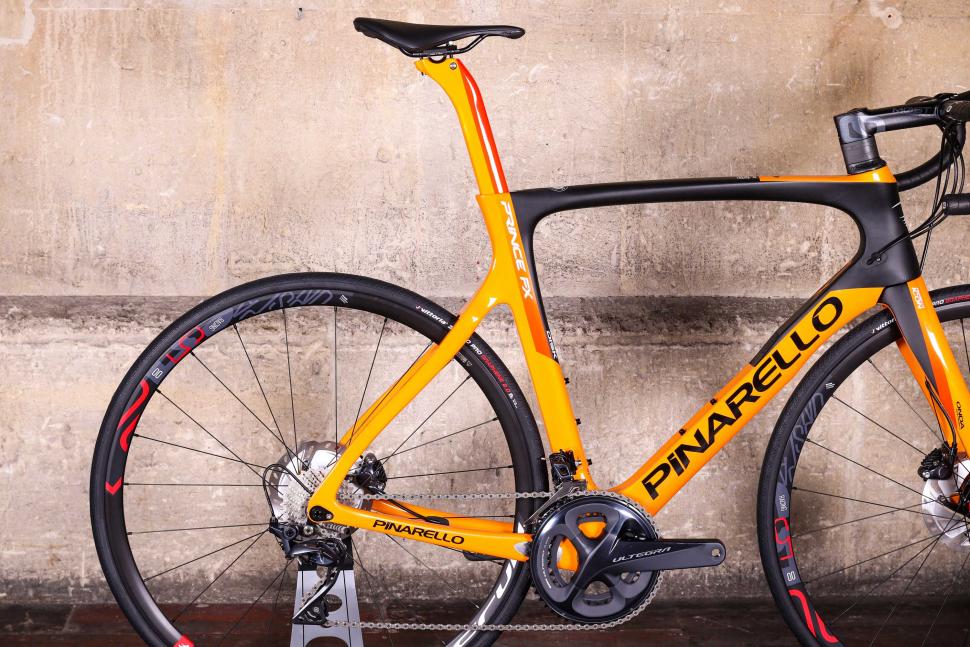 The Prince (in both rim brake and disc brake forms) is made from T700 carbon-fibre while the Prince FX steps up to T900. The Dogmas use T1100. You get higher tensile modulus (a measure of the resistance to elastic deformation) and tensile strength (resistance to breaking under tension) as you get to the bigger numbers (head over to Toray's website if you want to know details on the properties of each), but you also have to pay more money. 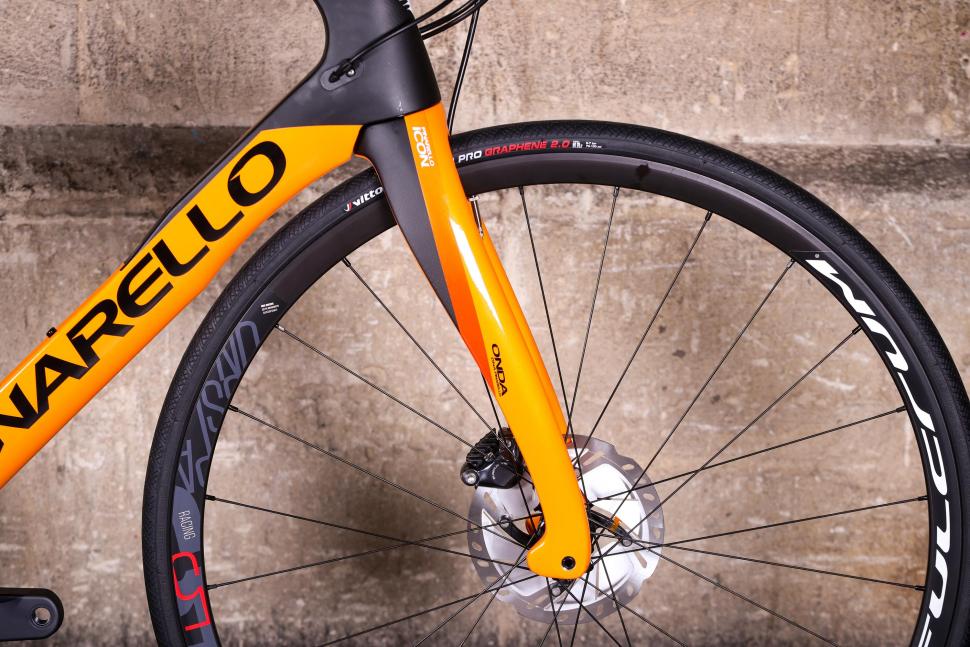 Like the rim brake model, the Pinarello Prince FX Disc comes with features that we first saw on Dogmas. Take a look at the dropped down tube, for example. It is shaped for aerodynamics and there's a cutaway at the front to accommodate the trailing edge of the front wheel. 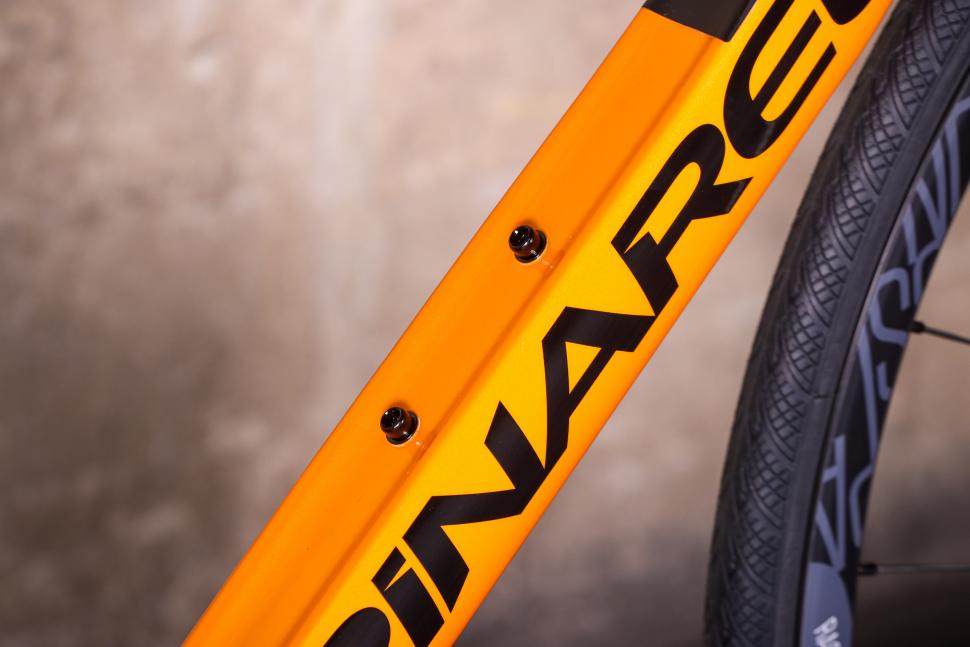 The rear of the tube is scooped away, the bottle cage bosses sitting at the bottom of a slight indentation. The idea is that the tube and the water bottle that you'll almost certainly be carrying work together in terms of aerodynamics. 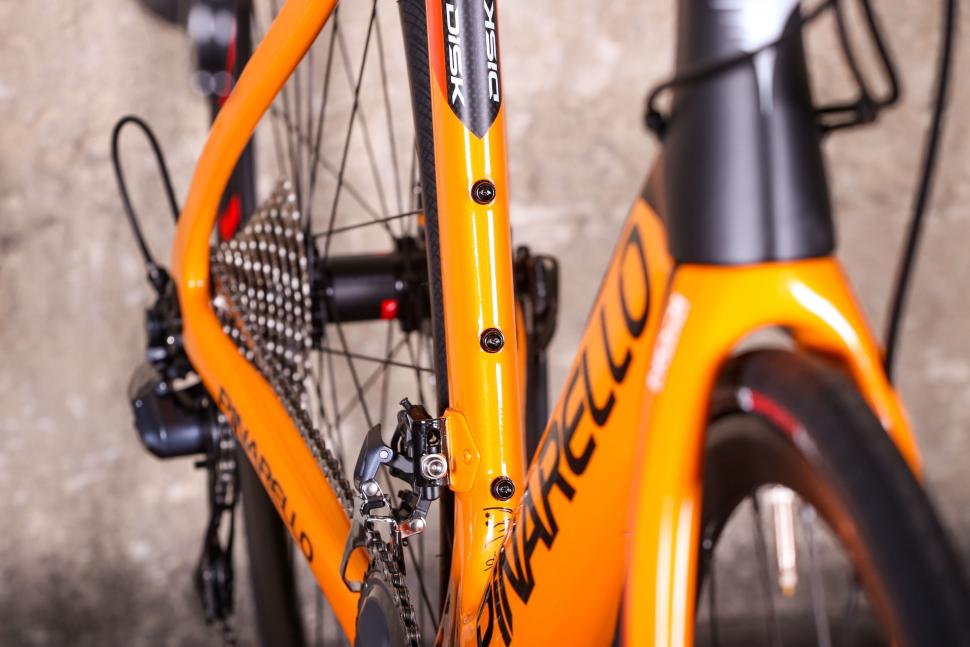 You get three bottle cage bosses on the seat tube; use the top two if you prioritise ease of access or the bottom two if aero efficiency is a greater concern. Loads of other aero features have been brought over from the Dogmas – the integrated fork crown, the dropped seatstays, the aero seatpost, the compartment in the down tube for a Di2 junction box, and so on – and the elongated front fork dropouts started out in life on the Pinarello Bolide that Bradley Wiggins rode to his Hour Record back in 2015, albeit in a different form. 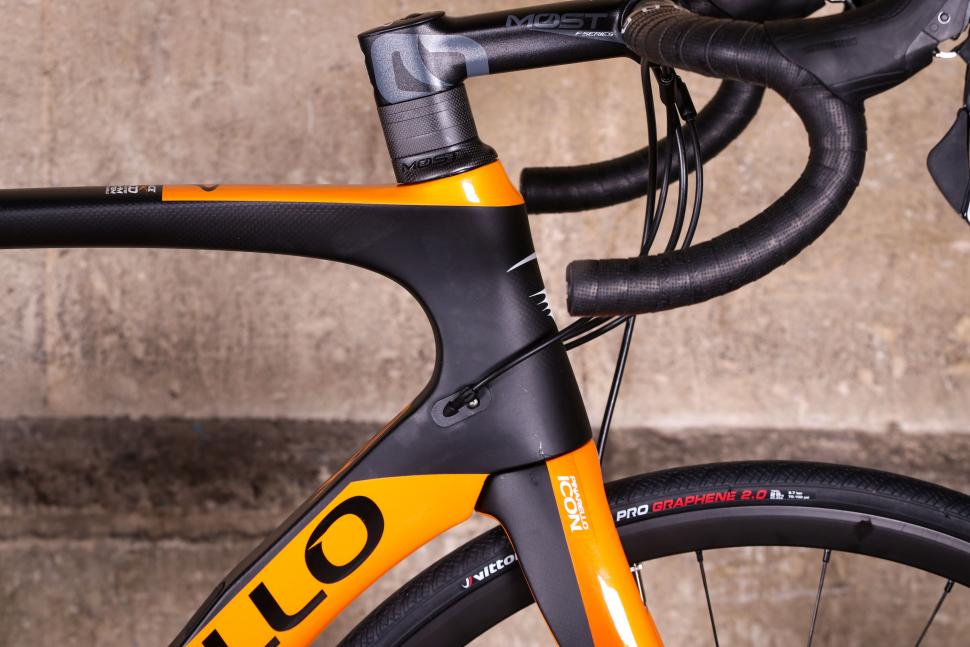 For comparison, the Dogma F10 Disk road bike has a geometry that's very similar although the head tube is 5mm shorter so the stack height is a little lower. The Prince FX Disc's ride position is a touch more relaxed but it's not a vast difference (Stu will doubtless be ditching a couple of those spacers!). 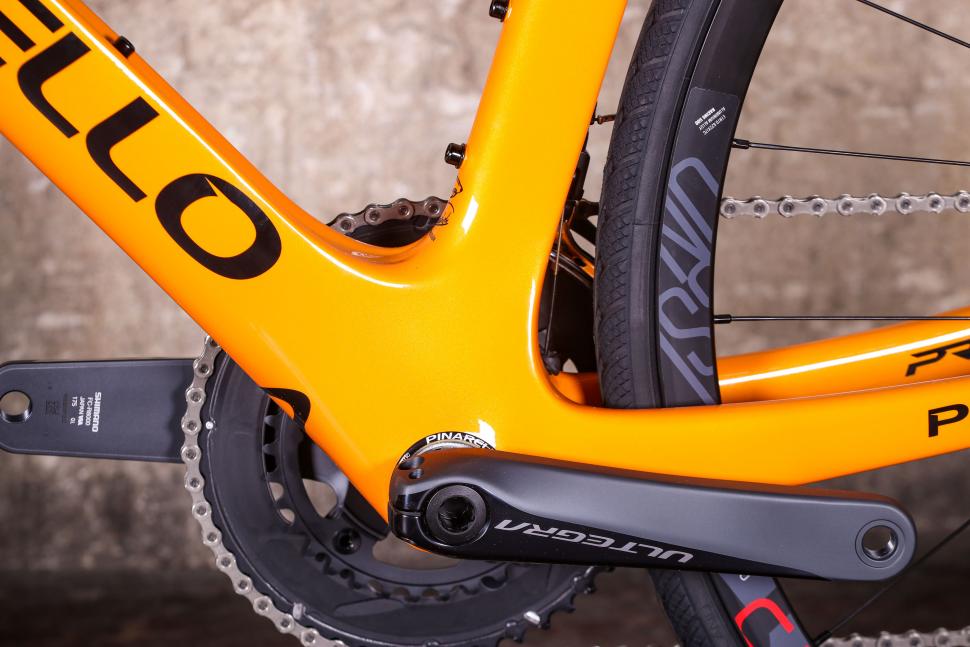 Pinarello shuns the trend by sticking with an external bottom bracket (Italian threaded) although, like pretty much everyone else, it goes for 12mm thru axles front and rear. Like the gear cables, the hose for the rear disc brake enters the frame at the top of the down tube while the front brake hose nips inside just below the fork crown and emerges about halfway down the leg – nothing too crazy there. 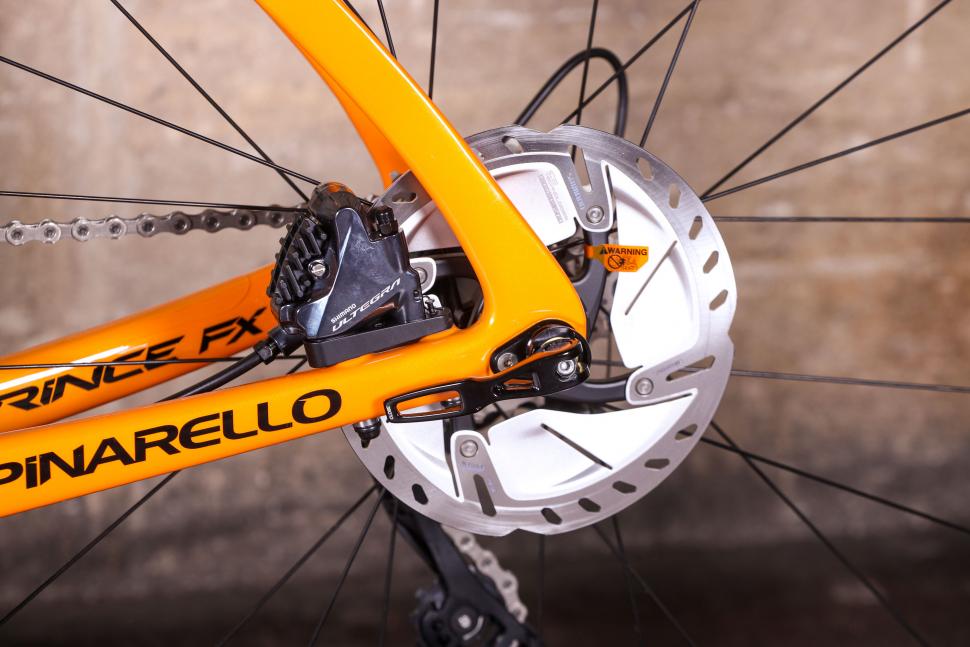 The brakes in question are Shimano's second tier Ultegra and the same is true of the rest of the groupset. 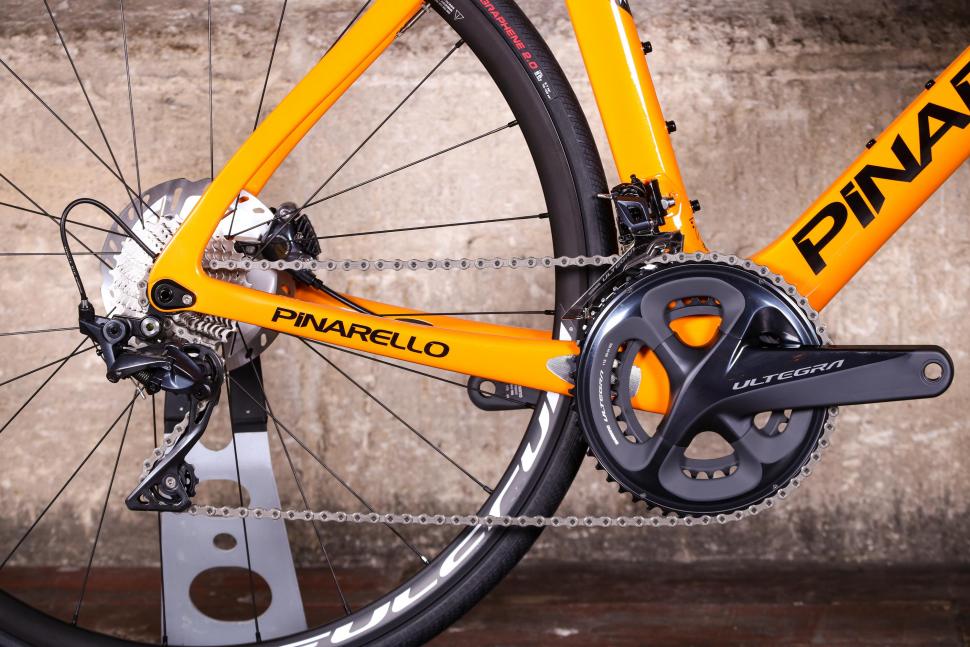 The chainset is compact (it has 50-tooth and 34-tooth chainrings) and it's matched up to an 11-28-tooth cassette. This being a racy bike, you might prefer a semi-compact (52/36-tooth) or a standard chainset (53/39-tooth chainrings). You could make a good case for either. The aluminium handlebar with its squashed tops is from Pinarello's own Most brand, and the same is true of the stem. The manganese-railed saddle with its large cutaway centre looks a lot like the Fizik Vento Argo R1 that we reviewed recently, but it's actually from Most too. There's not a whole lot of depth to the padding on the nose so we'll be interested to find out how it feels. 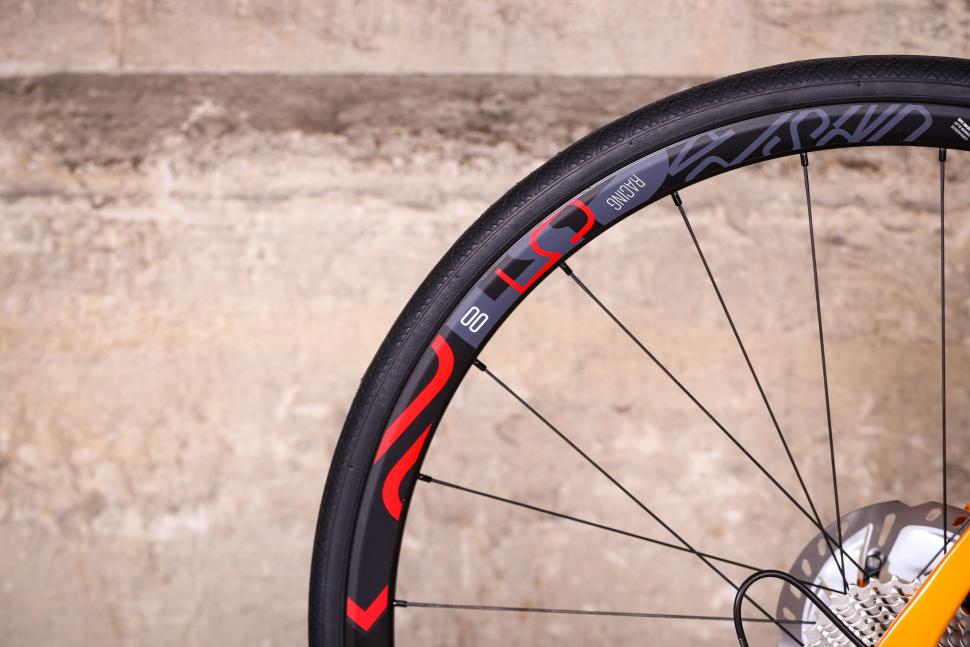 Selecting wheels for bikes at this kind of price can be a tricky one for brands. Do they spec something of a similar level to the rest of the components or do they take the view that most people buying a £5,000+ bike are going to have their favourite wheels already, and so fit placeholders instead? 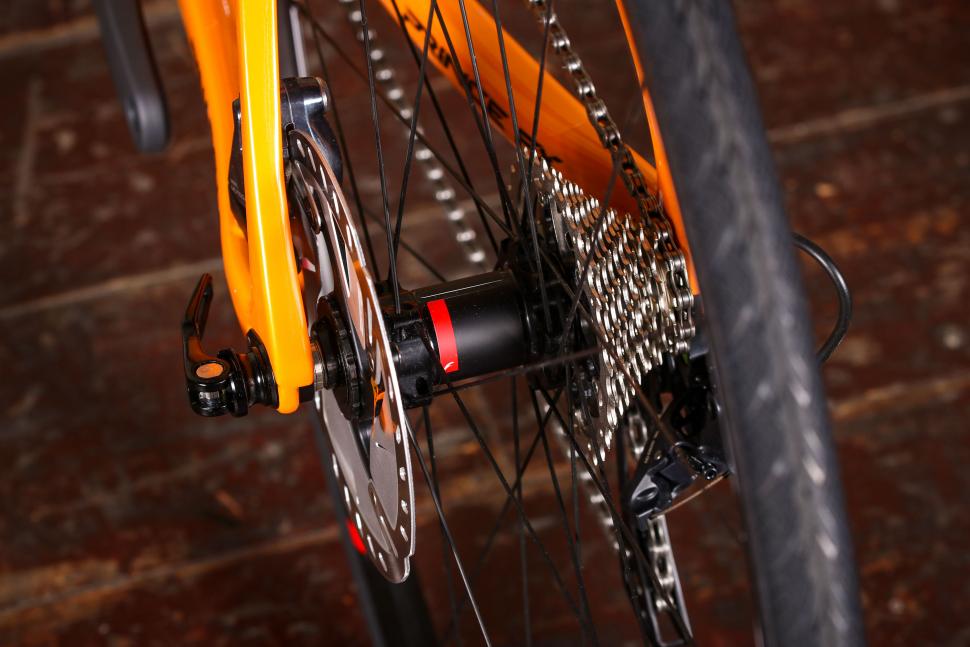 Bought alone, a pair of Fulcrum Racing 5 DB wheels would set you back £335 at full retail price, below £300 if you shop around. Stu reckoned that the Fulcrum Racing 500s held back the performance of the rim brake Pinarello Prince FX so we'd expect similar here, but who knows? We'll find out soon enough. 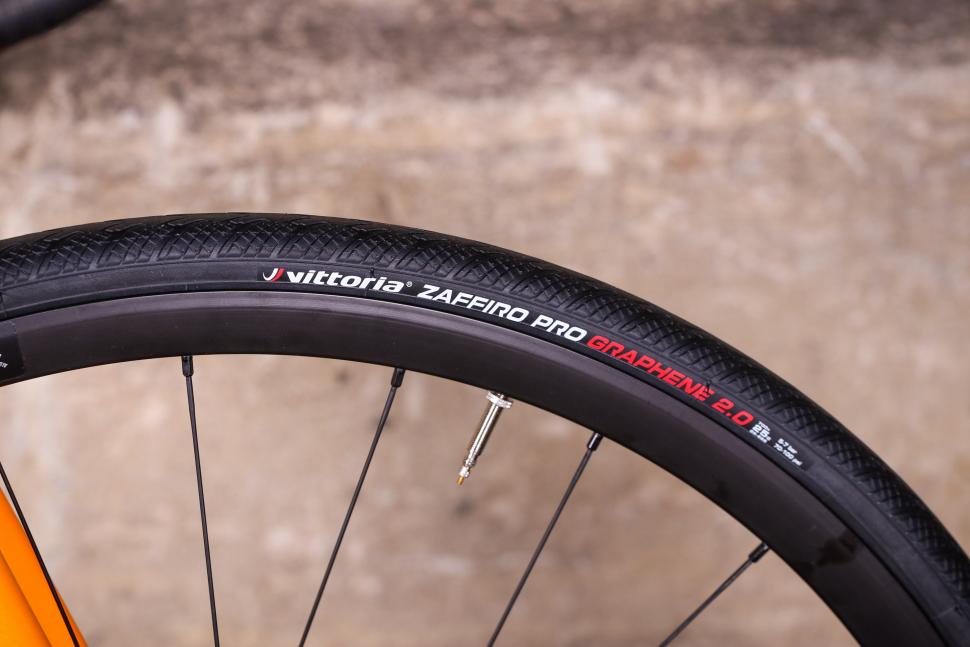 They're fitted with Vittoria Zaffiro Pro Graphene 2.0 tyres in a 25mm width, although there's enough space for 28s if you want to go a little wider.

Our 56cm Pinarello Prince FX Disc hit the scales at 8.43kg, making it about 390g heavier than the rim brake model that we had earlier in the year (also 56cm). As mentioned up top, it retails at £5,500.

Stu's due around to pick up the bike any time now. Keep your eyes on road.cc for a review soon.