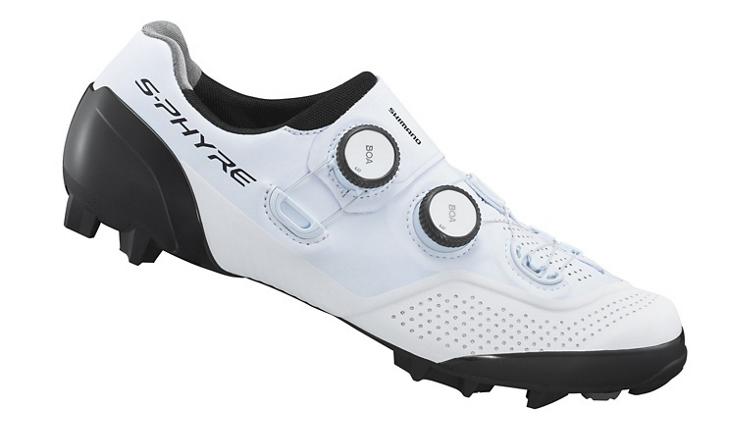 Shimano has unveiled a refined version of its top-end cross country mountain bike and cyclocross shoes, the XC9. The shoes feature a range of the same tech as the RC9 road shoes, with the refined ‘function specific zones’ making their way into the new shoes.

This also means that the shape of the shoe is likely to have changed slightly. The road shoes became slightly narrower through the mid-foot, before opening a little at the toe box.

Weight is a relatively important factor in both cross country mountain biking (XC MTB) and cyclocross. The XC902 shoes have been on a diet, cutting the claimed weight for a pair of size 42 from 660g to 590g.

The big difference, however, comes on the sole of the shoe which features Shimano’s Ultread XC rubber outsole for grip when off the bike. Shimano had, for the last two editions of the XC9 shoe, turned to Michelin for the rubber outsole, but has now brought the design in-house.

The outsole features widely spaced rubber knobs that are designed to dig into mud, providing traction. Where the sole is split by the upper on the road model, the off-road design features a textured rubber bridge. This firstly protects the carbon sole from stones and other sharp objects, but also provides traction on the pedals should you fail to clip in when remounting in cyclocross.

In a nod to cyclocross riders, Shimano has also included talon-shaped metal spikes which are screwed into the holes that would usually be occupied by spikes or football studs.

Speaking of cyclocross, there is often quite a bit of running involved and for this, you don't want the stiffest possible shoe. A little bit of flex is needed and Shimano has opted for a stiffness score of 11 compared to the road model which gets a sole with a rating of 12.

The soles feature drillings for the usual 2-bolt cleats, meaning that they will work with Shimano SPD pedals and other two-bolt cleat designs. While these are generally used by off-road riders, the dual-sided pedals are favoured by some road riders thanks to their float and release tension that can be set very low.

Shimano sponsors Mathieu van der Poel and the World Champion took 10 elite wins in the 202-21 season which was, by his standards, a relatively quiet year. Shimano also provides its shoes to the likes of Annmarie Worst and Ceylin De Carmen Alvarado, so they are well covered on race day.

Last season, Van der Poel was spotted sporting a pair of shiny white Shimano shoes, hardly the most sensible choice for the muddy world of ‘cross, but when your name is Van der Poel, you’ve probably got a few spare pairs and someone to do your cleaning.

The good news for fans of white shoes is that Shimano has, for the first time, listed the white model as available to the public. While the road version comes with a white mesh lining, Shimano has, however, sensibly opted for a black mesh on the XC902 which will not stain. If you’ve got more sense than me, blue and black options are also available. 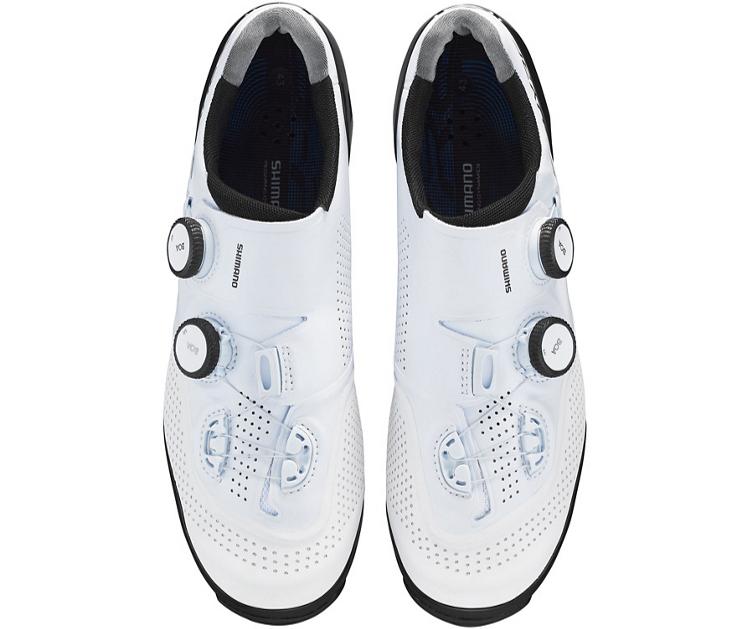 Boa again provides the closure dials in the form of the Li2. These offer micro-adjustment in both directions and can be pulled away from the shoe to totally release tension.