Italian brand Wilier has launched a mid-level aero road bike called the Cento10SL that's available in disc brake and direct mount rim brake versions. The evolution of the Cento10 range continues after the Cento10Air model was released quite a few years ago as Wilier’s range-topping bike, with the SL borrowing many of the features of the Cento10Pro, only with a lower grade of carbon.

The new Cento10SL is, Wilier says, a replacement for the Cento10Air which started its life as Wilier’s range-topping road bike but had gradually become the mid-level option with the Cento10Pro above it. In this SL model, Wilier has used a cheaper carbon layup which adds a bit of weight over the Pro model but keeps the NACA (National Advisory Committee for Aeronautics, a US agency that developed airfoil profiles) tube shapes. 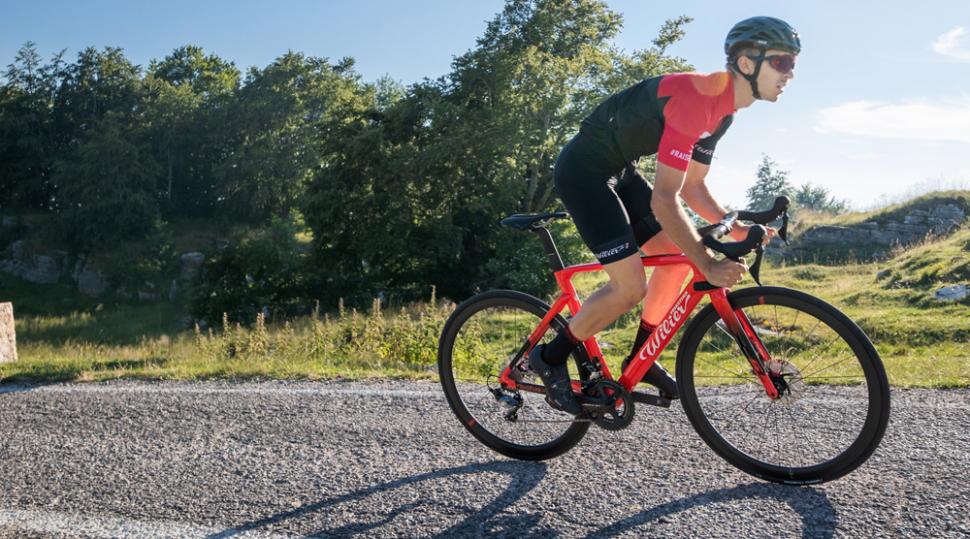 The tubes use NACA airfoil profiles with Kamm tails, meaning that they're cut off abruptly at the back, rather than tapering away gradually. While Wilier doesn’t make any specific aero claims about the new SL bike, they do claim that it will offer similar aero properties to the Pro design.

The eagle-eyed among you will have noted that the down tube plate is gone, thanks to a newly integrated cable routing system at the front end. Wilier says that this increases torsional stiffness while also offering a cleaner look and being a touch lighter.

The use of narrow headset bearings allows the routing of four cables through the head tube. That means that both mechanical and electronic shifting systems are hidden neatly out of the wind, though again, Wilier is making no aero claims about this. 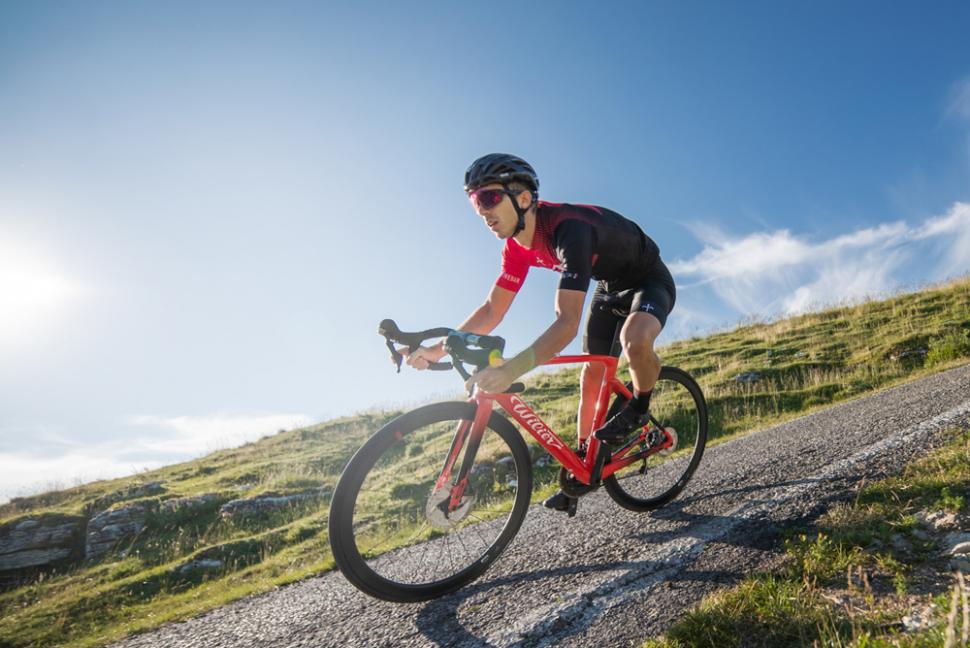 The Cento10SL features a new Stemma SL alloy stem (claimed weight of 170g for the 110mm version) that integrates on the underside with a carbon cover through which the cables are routed – so the cables are only exposed between the end of your handlebar tape and the point where they duck under the cover. This cover integrates with Wilier 10SLR headset spacers.

The stem's faceplate is hinged, held in place by two bolts on the underside that enter from the back. The bolt heads are only visible from underneath, adding to the clean look.

The Barra SL handlebar (claimed weight of 320g for the 42cm version) and stem both run the cables externally, so you can switch out your handlebar easily. The spacers can also be removed without having to disconnect the brake or shift cables. 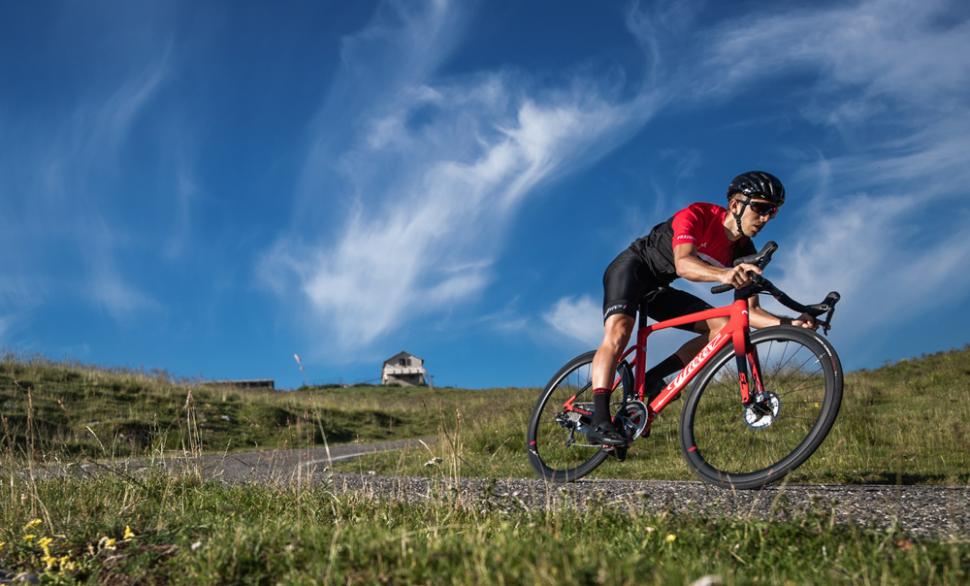 Surprisingly for a 2021 aero road bike, the Wilier Cento10SL won’t limit you to disc brakes, and the direct-mount rim brake model gets the smartly concealed cable routing too.

You don't get masses of clearance here: whether you go for the rim brake or the disc brake version, the maximum tyre size is 700 x 28mm. This is in contrast to many of the road race bikes that we’ve seen launched in for 2021 that have space for 32mm tyres. 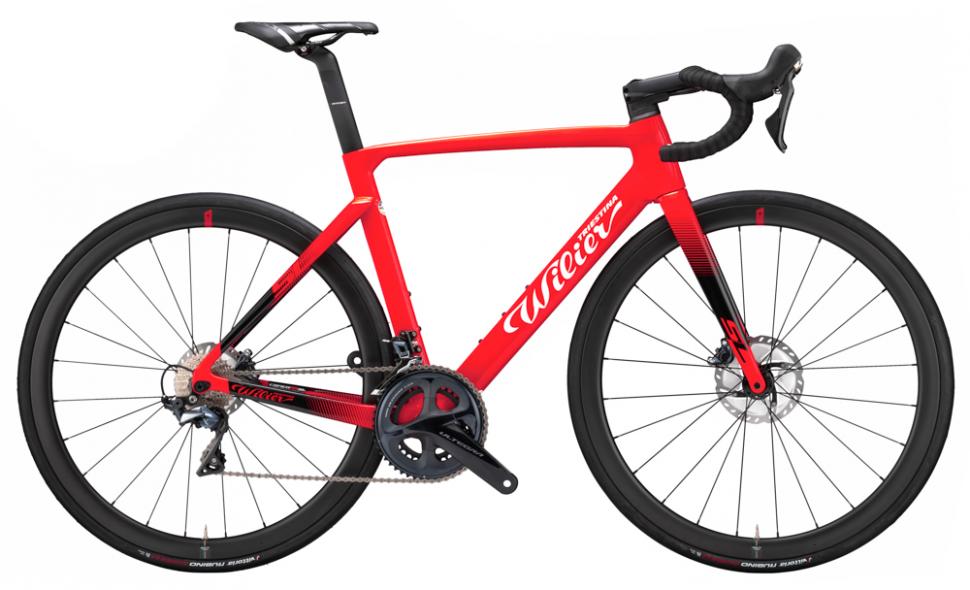 While we’ve seen a number of brands turning back to a threaded bottom bracket, Wilier sticks with a pressfit BB86.5 standard that allows them to make the bottom bracket area very chunky.

Wilier is claiming that a painted medium frame weighs 1,190g although we’re awaiting clarity on whether that’s the disc model or the rim brake version.

Get more info at wilier.com.