My first ever bike adventure, to somewhere less than ten miles away, was a list of road names written on a strip of paper Sellotaped into a loop round my handlebars by my stem, a bit like an analogue Sat Nav, about thirty years before Sat Navs existed. It rattled around and kept slipping down to the right-hand brake lever, but its simple directions got me to where I wanted to be via the unfamiliar but empty roads of rolling suburbia. And by reading it backwards it got me home again.

Nothing much has changed. Despite the current proliferation of digital tools I still prefer my rides to involve bits of paper. 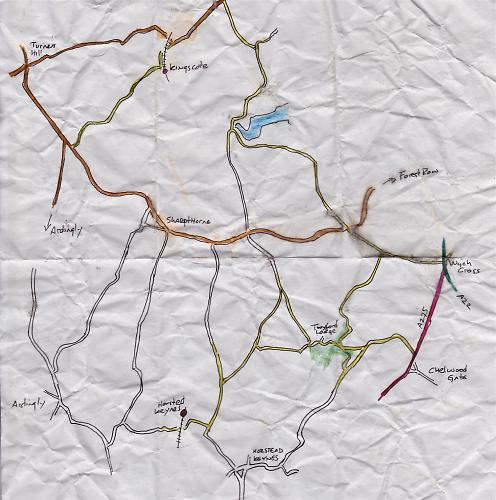 Way back when in what are now known as my formative years GPS devices didn’t even exist and bike computers weren’t in any way common, unless you called the car-like speedo that ran off a wheel that rubbed on the front tyre a kind of computer. How I desired the overly large multi-coloured plastic clunkiness of one of those, that and the milometer that mounted discreetly on the front forks which counted the clicks of the passing tab on the spokes, available for 27”or 700c wheels. My father had one on his Dawes 5-speed - a sign of maturity and knowing. I rode circles of the lawn to cover a mile just to watch the little number click forward one. The endless circles of the lawn with a growing feeling of fear that my Dad would notice the change of numbers. He wrote things down did Dad.

As my world expanded further from that pioneering trip through the houses I would spend hours on my tummy on the front-room floor, pink Ordnance Survey map laid out flat in front of me, possibly a cup of tea and some biscuits in the vicinity, legs pedaling the air, index finger worn smooth from tracing out lines on the map, forming a route that used as many of the traffic thin yellow roads as possible. Then the Special Bit Of String from the second drawer down that held all the Useful Things would be fetched and lain out over the proposed route on the map. The length was marked and then measured out against the distance scale along the bottom of the map, anything over four lengths of the scale was a good ride back then. My entire cycling world was boundaried by the margins of that map, fire-breathing griffins and angry spouting sea monsters lurked off the edges, it would be some time before I tentatively made excursions onto another piece of paper and it was like exploring the New World.

About then proper bike computers arrived and knowing the ride distance became instant, making the Special Bit Of String instantly obsolete and slowly it sank to the bottom of the second drawer down, buried under more Useful Things. But the maps still came out to plan days out, although less and less often as routes slotted into memory and a vast database of rides could instantly be called upon to suit distance and mood.

Now there are vast chunks of the world collected in folded bits of paper that fill a large part of the bookshelf. UK ones up there, foreign ones in box files by country down there. When going somewhere new a fresh corresponding map has to be bought. It’s the law. Nothing compares to opening up the crisp folds of an unfamiliar land and spreading out all the imagined possibilities in front of you. Looking for any remembered names, making a note of the crowding of contours, tracing with the index finger worn smooth the tempting wiggle of roads and being suddenly aware of the clusters of black arrows. A mix of longing, excitement and fear.

Over the years I have developed a weird exploratory quirk; a consequence of spending the majority of my life butted against a coast. My local map is 50% useless, everything south of my house is a no-go area for bikes, they don’t do so well in the bottom half of blue. My rides mostly involve going up, and not just because I live at sea level. Such is the habit of a lifetime looking at the top half of the map it takes a massive mental wrench when opening a new map to drag the eyes southwards and see what lurks there, where land and hills don’t ever usually exist. Those new maps slowly become creases of paper that carry the tattered corners, ripped seams, faded sections and muddy smears of fun, effort and memories. Once more to be unfurled onto the front room carpet, legs flailing the air, pedaling the route again, and this time to be read like a book, recounting stories of the smiles and tears traced out along roads and byways.

Alongside the broad ridge of thin pink and yellow and orange spines is a pile of paper. Folded, creased, torn and stained scraps with lines of roads and names drawn on with fine pen. Sketched to fill gaps in any route knowledge, joining that known bit to that known bit, extending a well known loop a little bit further, exploring outside of the usual jurisdiction, any reason that just a small section of map is needed rather than the whole sheet. The relevant area traced off onto an easily pocketable tear of paper, or maybe if I’m feeling posh a photocopy and a highlighter pen, to be pulled out at that junction that leads away from the acquainted, to help with the leap into the unknown. 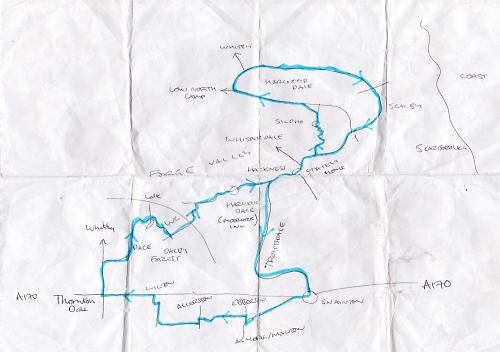 But the common habit now is to look at a screen. All we do now is look at screens, for work, for fun, for friends, for talking, for interacting, for riding bikes. The luscious language of the landscape has been reduced to binary, a list of numbers, lines, stats and graphs. Granted, computers have made things easier in that you can plan a route in the comfort of sitting down, endlessly fiddle with the route so that the mileage fits and then download it to your box of handlebar tricks that will tell you where to go. Or let someone else do the hard work and simply Plug and Play. And then you will instantly know how far you’ve been, at what speed, where the steepest hills were and who you beat along the way. And you can immediately and urgently tell all this to anyone else that just so happens to be looking at a screen at the time.

All very impressive and requisite for showing off but you will never get a feel for the land from a 2” screen. It won’t be able to feed an imagination by describing the woods and forests and lakes and rivers and villages you’ll pass. Why that road does that wiggle, that bend. Computers follow a line, a map adds colour, depth, meaning and history. In this ubiquitous oppressive digital world I still like to escape with my finger, disappear into the narrative of a map. And you can buy an awful lot of maps for the same price as a handlebar mounted toy. 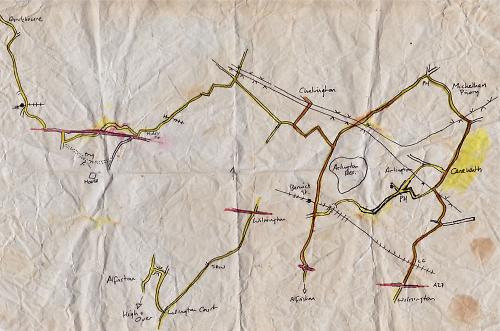