Grinduro 2017: Fun times and great racing on the Isle of Arran

Grinduro 2017
Grinduro, the event that is about the party as much as the racing, arrives in the UK for the first time. road.cc was there to take part

I was rather hoping to be soakin’ in some Californian-style sunshine rather than soakin’ wet during the first Grinduro on this side of the Atlantic. But we didn’t let the rain spoil proceedings, and chilled riding, hard racing, great food, beer, music and entertainment were enjoyed by everyone that made the trip to the beautiful Isle of Arran, Scottish for an event that is a little different to the norm.

I had been aware of the Grinduro event since it was first held in Quincy, California three years ago. Seen a few articles and watched a couple of videos that spoke of an event that was quite a bit different to most others, but critically seemed to emphasise having fun, both on the bike and off it. So when it was announced it was coming to Scotland for the first time I knew I had to ride it to see for myself what it was all about.

Maxin’ and Relaxin’ is the motto of the event. “The Grinduro is about the party as much as the racing. Festivities include two days of excellent food, a handmade bike show, an art exhibit, live music and camping,” say the organisers. 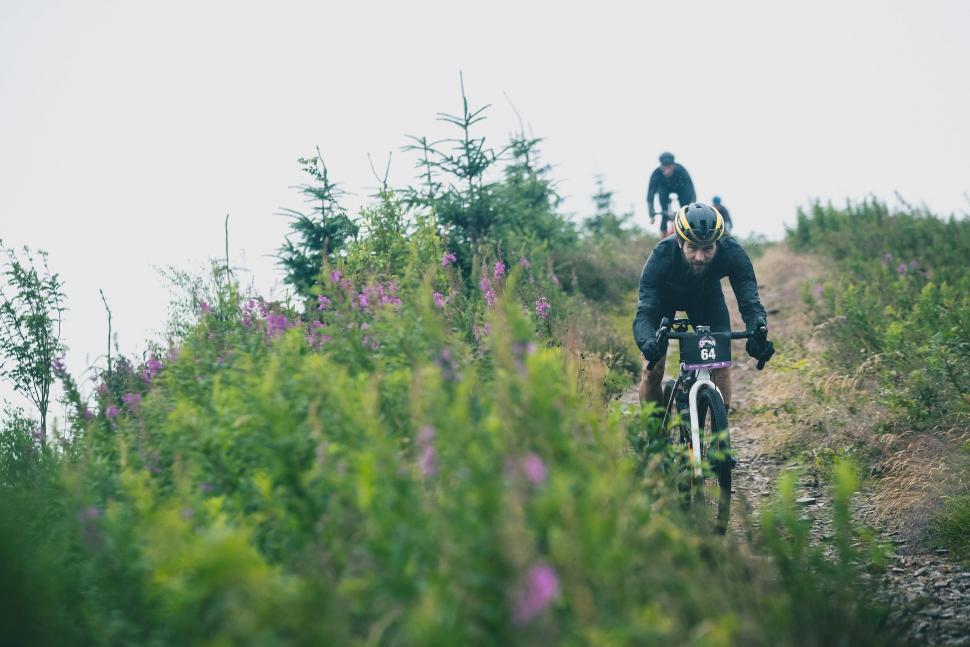 What sets Grinduro apart is in combining the attributes of a gravel race and a mountain bike enduro. Instead of racing one big timed loop, there were four timed stages within a 75km route around the Island. Two fireroad climbs tested aerobic capacity, there was a fast fireroad descent for the brave, and a super technical singletrack trail through the woods that tested tyre and bike choice. But in only having four timed sections, there’s less emphasis on riding hard on the transitions, and that means a more relaxed vibe and atmosphere. More time to banter with friends new and old, enjoy the views (though the weather kept those to a minimum) and really just have a bit of fun, and great camaraderie.

What Grinduro has attempted to do is offer more than just great riding and racing, contained to the four timed segments. It’s pitched as a weekend of frivolity, fun and relaxation. To just turn up at the start and leave after the finish would be to rather miss the point of the event. Maybe that’s why they hosted it on an Island so people couldn’t easily get away after the finish? (though that didn’t stop the outright winner who was quick enough to get the last ferry home to the mainland…). There’s so much more to Grinduro than just the riding and racing, though of course, that’s the main attraction. You’re not just paying to race, Grinduro is a mini festival that celebrates cycling and riding bikes. The Bicycle Academy was offering frame building intro sessions, allowing participants to weld their own unique Grinduro bottle opener.  Four frame builders - Donhou Bicycles, Feather Cycles, Mercredi Bikes and Shand Cycles - had been briefed to build a bespoke bike which they would ride in the event, and a public vote would be held to choose the best one. In the end, Mercredi won by a landslide and her prize is a trip to California to ride Grinduro in October. There was great food, a bar, live music from Glasgow band Van T’s, but most of all were the socialising amongst the riders, stories of daring do, crashes, mechanical woes and other stories were traded throughout the night. There was some dancing for those who weren’t too tired to stand. Prizes were given out across the many categories, best of all was a special price for the spirit of Grinduro and one lucky chap walked off with a limited edition Charge Plug bicycle. And it all takes place on the Isle of Arran. A short ferry trip from the mainland and an hours drive to Glasgow, it’s relatively easily accessible destination but once there it’s a small paradise and a real escape from the daily grind. Rolling hills and big peaks, the biggest Goatfell at 874 metres, an imposing sight when approaching the Island on the ferry, and surrounded by clear water and lush fertile land crisscrossed by some fabulous trails of all varieties. From wide gravel tracks to narrow singletrack, technical root-infested trails and cliff-edge hugging sinuous paths, there is great riding on the Island and the Grinduro organisers handpicked some of the best to create a course that was highly challenging in places but ultimately rewarding, though it had a few people questioning their tyre and bike choice.

Because the event is aimed at drop bar gravel bikes, though there’s nothing to stop you picking a mountain bike (indeed, the fastest guy rode a mountain bike), there was a lot of chatter about the right bike setup in the weeks leading up to the event, and it only increased during and after the event. Let’s just say it was eye-opening riding some of the trails, and in particular stage two, on a drop bar bike with narrow tyres. Of course, it’s worth adding that the conditions played a big part in how challenging the course ended up being. In the dry, it would have been a different matter. The course definitely pushed upwards into the “bloody hell this is tough” category for anyone on a gravel bike, and particularly the many people on cyclocross bikes with 32mm tyres. 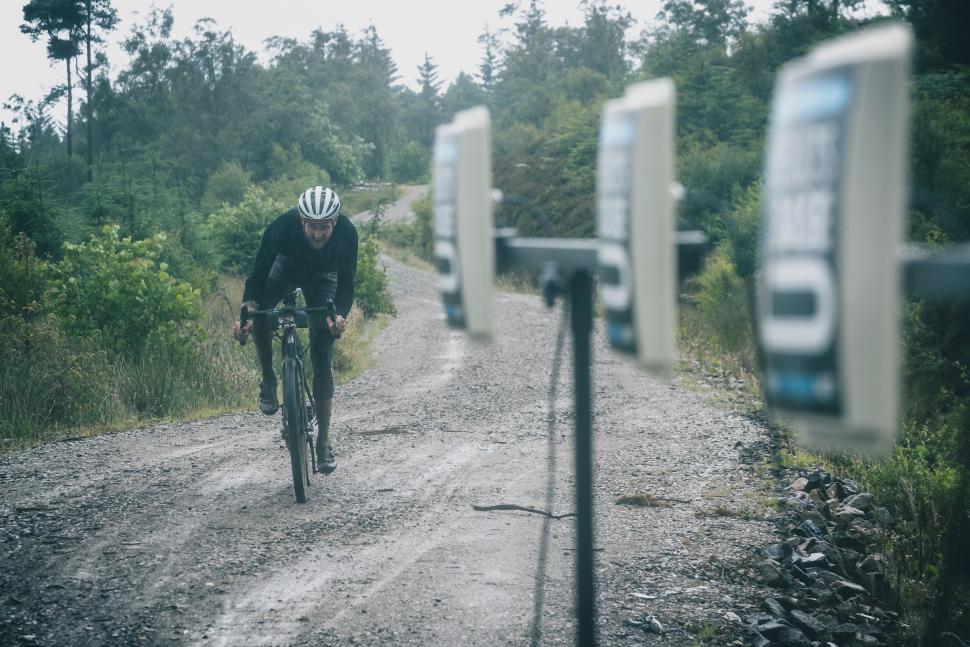 That though is the beauty of the event, and as the Bicycle Academy’s Andrew Denham correctly observed, there is no perfect bike for the event. I got around on the new Kinesis Tripster AT with 40mm Panaracer Gravelking tyres and it was mostly okay, but I would make a few changes for next year, namely a shorter stem and a quick release seatclamp or dropper post so I can easily lower the saddle on the steeper trails.

The Californian event has been a success, building in popularity to this year selling out some 800 places in just a few hours, and the same success is hoped for the Scottish leg of the event. It’s such a shame the weather didn’t get the memo, and I feel for the organisers that had put in months of work to pull the event off, but we’re used to a bit of rain and mud in this country and I don’t think anyone was really put off by it at all. In fact, it probably only added to the camaraderie and atmosphere because it compelled people to look after each other and laugh in the face of the weather gods. My mini poll of people at the finish and the following morning indicates everyone enjoyed it and can’t wait to come back next year. And so should you if you fancy an event that is a bit different to anything else out there, and pushes fun to the fore. I’ll see you there.

Here are some photographs that capture the atmosphere of the event, taken by pro snapper Russell Burton. 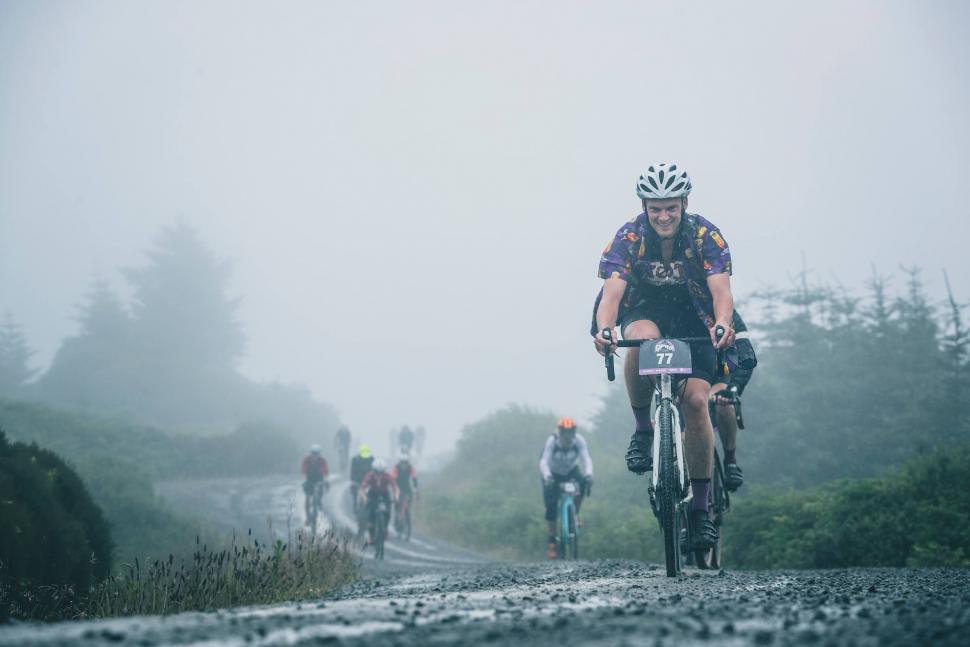 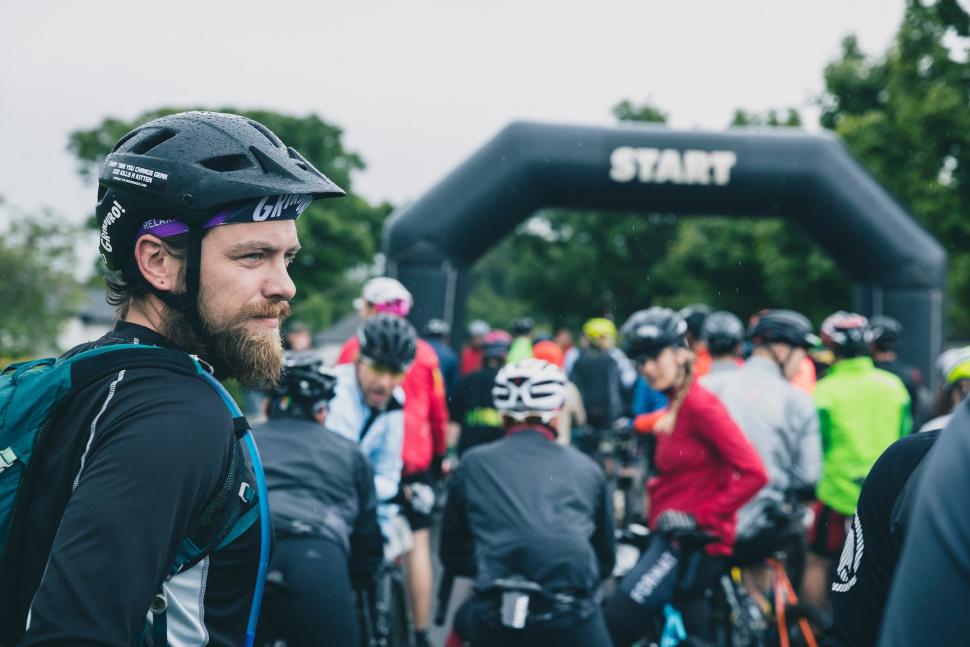 The calm focus before the storm 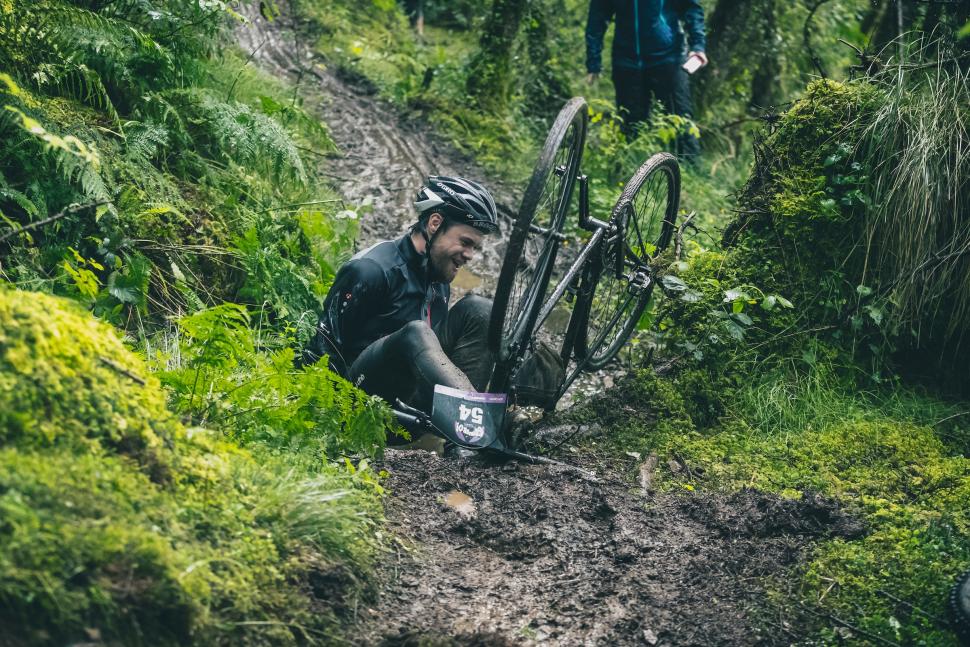 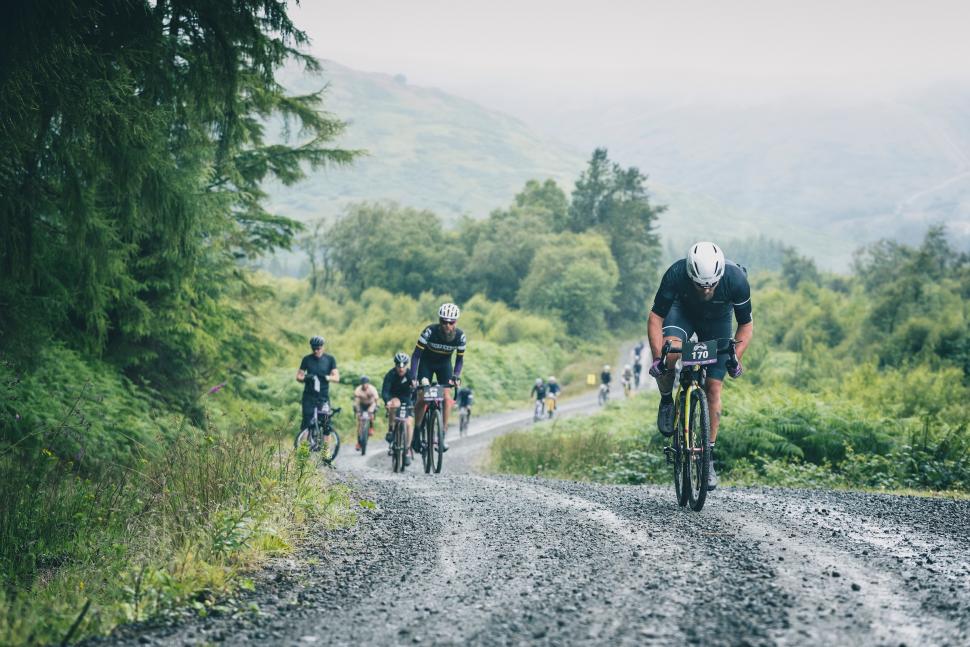 Grinding the gravel in the rain, the Grinduro was a tough physical challenge 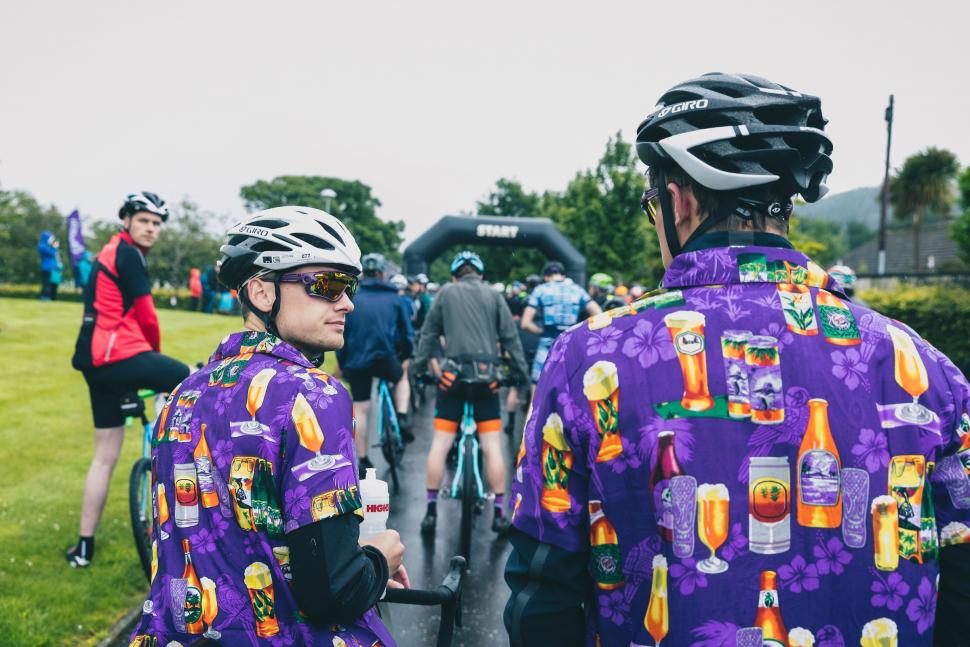 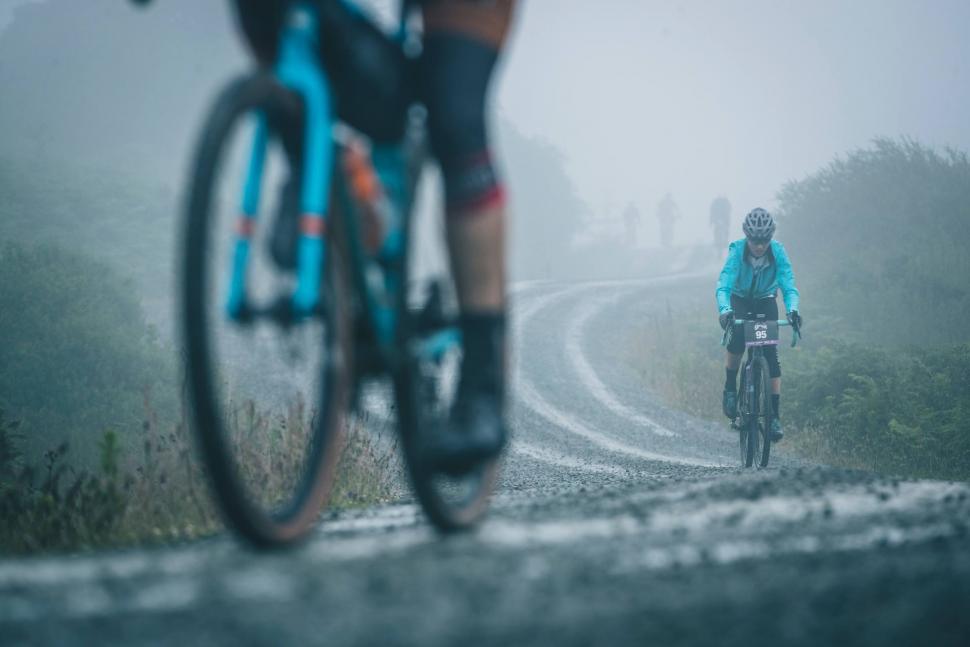 You find your own rhythm and pace on the timed sections 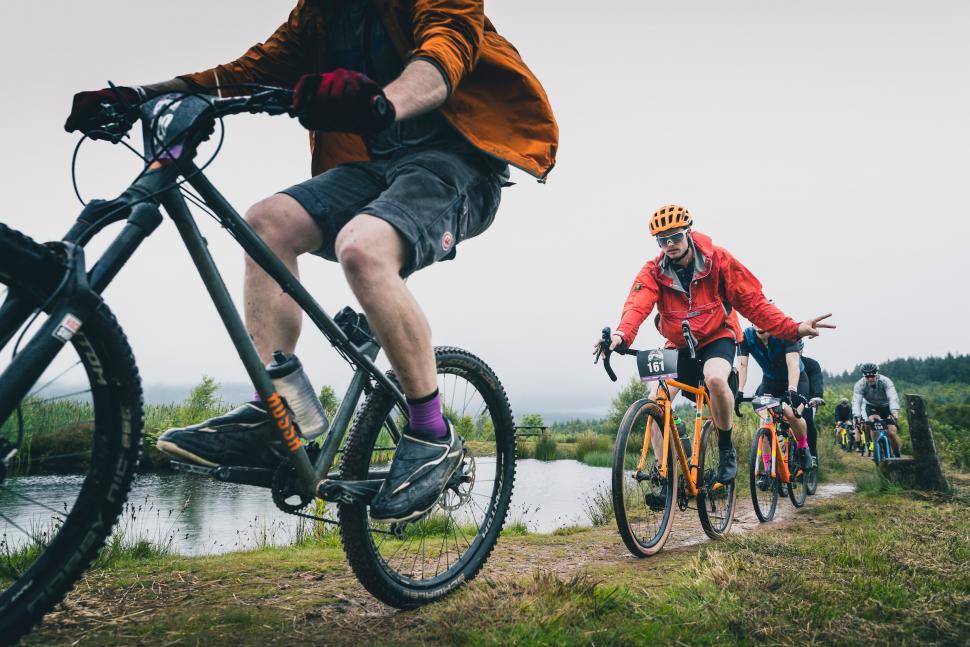 The transitions are a chance to regroup and ride along with friends, old and new 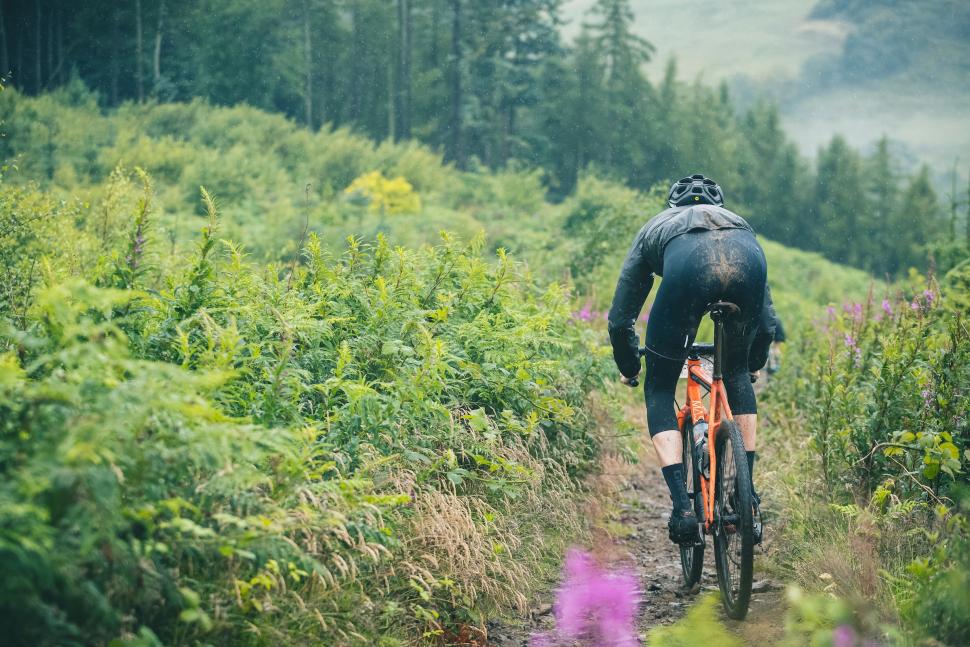 Dropping into another steep and twisting descent 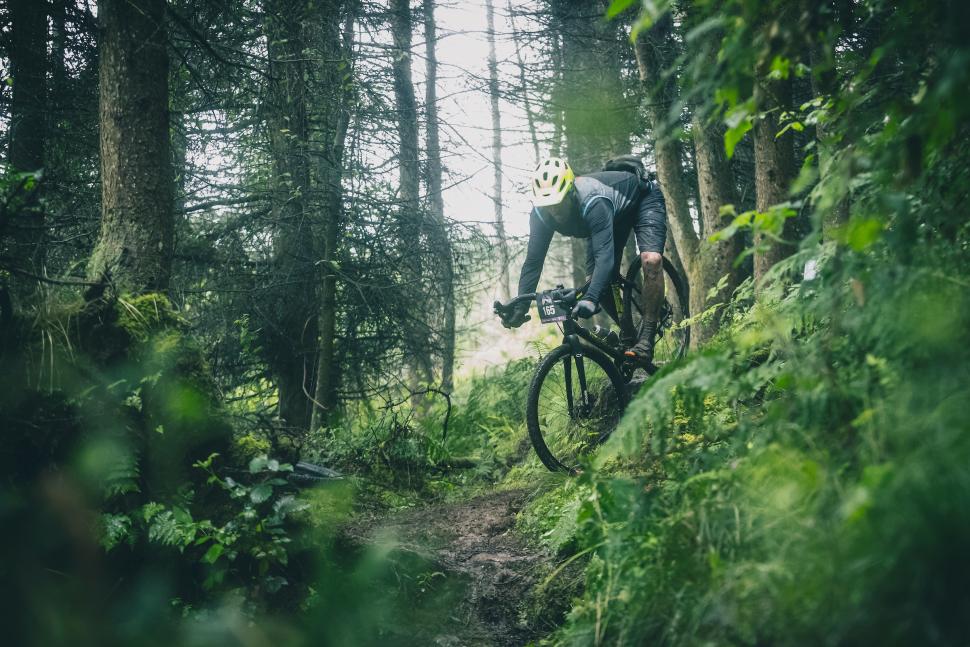 There were some hidden challenges on stage two, including this drop which claimed a few victims 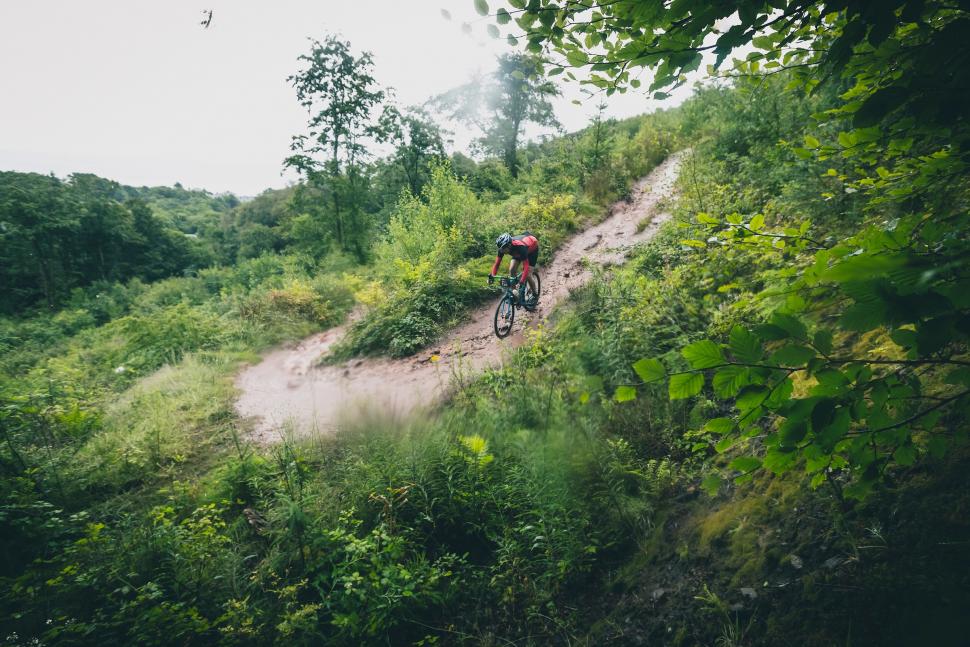 Tyre choice was tested on steep and slippery trails like this one. It wasn't a timed section though 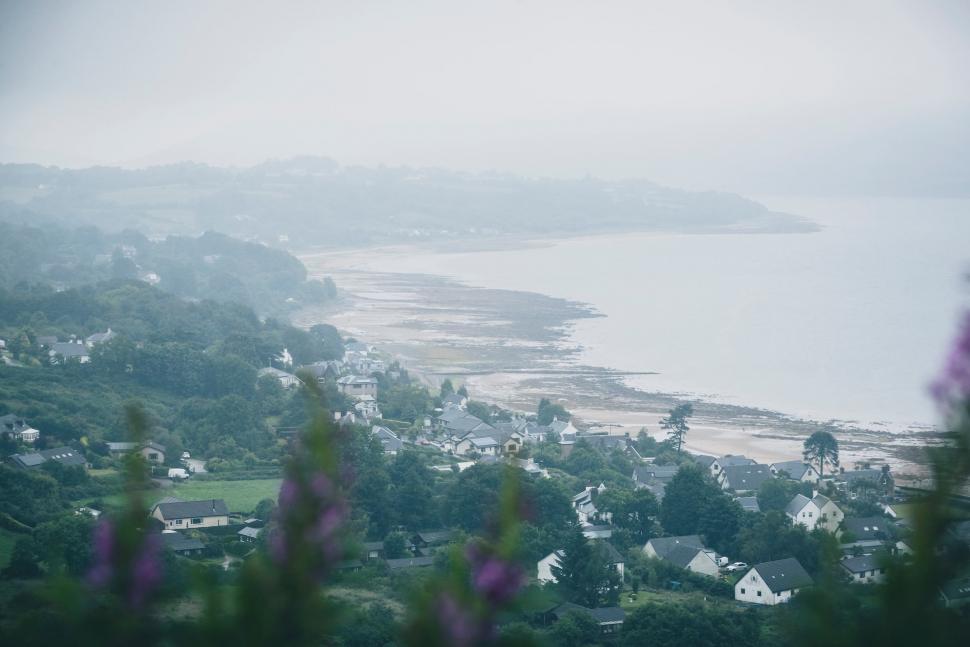 The weather occasionally offered a glimpse of the beauty of the Isle of Arran. What a place to ride a bike.