There was that time I did Red Bull Timelaps solo. Let me tell you about that.

Do you know Red Bull Timelaps? It’s a 25-hour 24-hour race. It’s on the weekend the clocks go back so you have to do that hour twice, and you do a special lap and each one counts double. Generally it’s teams of four, but this year the organisers offered up some solo places and I blagged one of them. I’ve never done a 24-hour race before. Or a 25-hour race.

It’s fair to say I wasn’t at the absolute peak of my physical fitness for this one. I’ve done some big rides this year, including a 600km audax that’s now my longest ride ever. That took me 38 hours so this should be a walk in the park, right? Anyway, I was a bit heavy and not particularly well-prepared, in spite of Joe Beer’s best efforts to knock me into shape in the six weeks before the race. And here, in a nutshell – well, a video – is how it went…

Okay, so overall I was fairly happy with the fact that I came fourth, which is nearer the top of the field (of 12) than the bottom. 400km was my base minimum for what I’d consider giving it a good go, and I was hoping to nudge over 500km and I didn’t, quite. But yeah. It was a decent day out.

I’ve learned from previous endeavours that I can’t just keep going indefinitely. I mean, no-one can, but my limit is well below 24 hours. If I don’t take some time off the bike to just sit (or sleep) and process what I’ve eaten, then I end up just backing up until my stomach decides it’s had enough, with the inevitable consequences of that. So it was always the plan to take some decent breaks along the way. My basic plan was to do three three-hour stints at the front end with short(ish) breaks and after that kind of play it by ear. That worked fairly well. I wasn’t in contention for the podium, but then just not coming last was my main priority at the start. 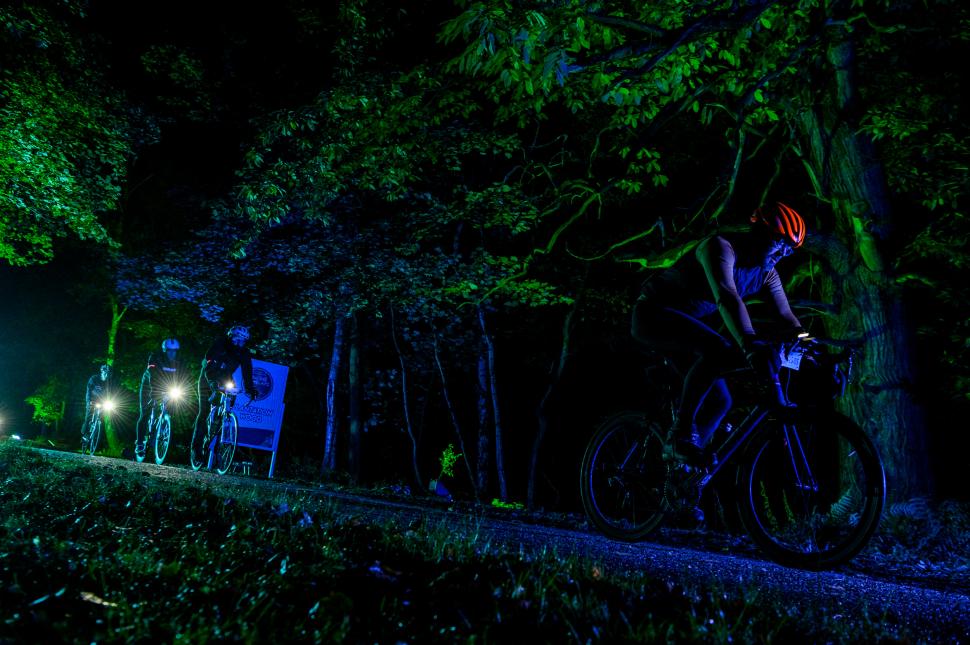 The Power Hour laps were important in the overall scheme of things because it was a shorter lap that counted double. So it was important to be fresh for that. I was especially fresh as I forgot to set an alarm and slept for an hour, and then woke up 15 minutes before the Power Hour started. It was a rookie mistake, but in the end it probably worked pretty well: I was fresh and put the hammer down a bit. I was knackered after that and took my longest break, an hour and a half. I did a couple of hours into the morning, then took a break, and at the back end of the race it was kind of stop-start: my back was starting to hurt and I could only do two or three laps before I needed to step off the bike. Just walking through the pit lane and chatting to Stu was generally enough though, so I mostly kept moving.

Could I do it better? Yeah, probably. Cutting the faffing to a minimum is one way to save time: knowing what you’ll need for the next stop (food, clothes, lights, etc) and making sure your pit crew knows to get it ready. Some kind of a spreadsheet would probably be good. I do love a spreadsheet. Over the course of the race I could have probably saved myself half an hour. That’s another couple of laps.

I could probably have gone a bit harder too. I was deliberately being conservative with my effort because blowing up and having to sit down for several hours is less efficient than trying to keep going at a lesser pace. But I could probably have upped the effort a few percent and snuck in a few more laps without any major issues. I was tired at the end, but I wasn’t spent.

My fuelling went well. On Joe’s suggestion I tried SIS Beta Fuel for the event and I’m a convert to that: it’s pretty easy to drink and it’s much more energy dense than any other drink I’ve tried. It wasn’t a day where I was sweating a lot, what with the sub-maximal effort and the pissing rain and cold. I think I might find it a bit much on a hot day where I was having to drink more. Other than that I just had some fresh pasta, chocolate buttons, the odd banana, homemade flapjack and a bacon sandwich in the morning. I didn’t bonk, and I didn’t feel sick either. That’s a win.

The bike was okay; I can’t decide whether I’d have been better off on my Tripster ATR, which is heavier and less aerodynamic and a fair bit more comfortable. Also it has dynamo lights and a frame bag you can put flapjacks in. And, importantly, mudguards. I definitely would have been better off with them. I didn’t fit them because my thinking was that I’d be riding in a fast group in the rain with lots of other people without mudguards, and I’d get wet anyway. In reality I spent a lot of the first nine hours riding on my own and they would have been a big help. The only things I changed on the Merida were the pedals – I swapped to SPDs from SPD-SLs as I find them better for long distance riding – and the seatpost: I used the Cane Creek eeSilk suspension post, which is an excellent and worthwhile addition to any bike you’re going to ride for a long time.

Thanks to dhb for ponying up some Aeron Equinox kit, including the new Aeron Alpha Gilet which is my new favourite thing. Polartec Alpha is fantastic: it keeps you warm when it’s cold and you don’t overheat when it warms up. It stays warm even when it’s wet, and you can just shake the water out of it. It’s great. dhb has built the Alpha into a really nice gilet that’s windproof and surprisingly waterproof, and has useful pockets and a nice snug fit. It’s excellent: I wore it for about 22 of the 25 hours. Also, thanks to Red Bull for having me. Would I do it again? Probably. Stu might think twice about being pit bitch though...