There are three riders in this paceline hammering across the pavé of northern France: Geraint Thomas, Bradley Wiggins… and me. This is odd. Very odd. In fact, it’s absolute madness.

Of the three of us, I’m the only one who’s not an Olympic Champion. I’m the only one who has never raced in the Tour. Or the Giro. I’m the only one who isn’t a professional rider. I’m a journalist. I ride a lot but… I’m a writer. What the hell am I doing trying to stick on the wheel of these guys across the most ridiculous road surfaces known to cycling? I’m not sure what’s worse, the pain or the fear that I’ll clip a back wheel and bring down a world-famous athlete.

Actually, I say that… it’s the pain.

IG Markets, one of Team Sky’s sponsors, have brought us out to France to ride over the cobbles ahead of Paris-Roubaix with the squad. There are a few of us journos here –half a dozen, maybe. The team are going to ride about 60 miles, taking in 10 or 11 sections of pavé. We’ll ride with them for about an hour and a half… as long as we can keep up. 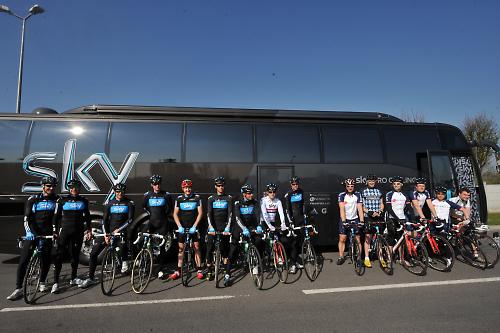 Before we start, we’re given a briefing. We’re told that the team will take it steady for five miles or so, but once they hit the pavé they’re going to ride at race pace. Oh. Okay then. You’ll never guess what; it turns out Team Sky’s race pace is pretty fast… 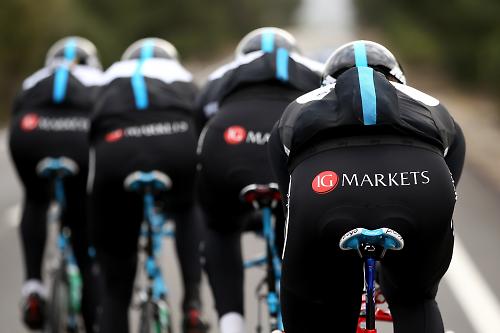 If you’ve never ridden the cobbles, it’s hard to get your head around just how brutal they are. A few years ago, I rode the Paris-Roubaix sportive that’s run by the VC Roubaix cycling club. It’s 150-odd miles over the course the pros ride.

The cobbled sections are a bit like mountain biking, I guess, but not much. They’re high-frequency bumps interspersed with the occasional big hit when the pavé gives way to a pothole. Basically, you get shaken to bits and sooner or later you ache, starting with your arse and hands and finishing with everything else.

The trick is to hold the handlebar loosely, which is completely counterintuitive. Your head is telling you that a white-knuckle grip is the only sensible option. Even if you do manage to relax your hands, it still hurts but you don’t get so much pump in your arms.

Often, you’re shaking so much your wheels bounce off the ground. You can let some air out of your tyres to soften the ride, but that'll increase your chance of getting a pinch flat. Sometimes it gets to the point you can’t see very well. It’s hideous. And brilliant. 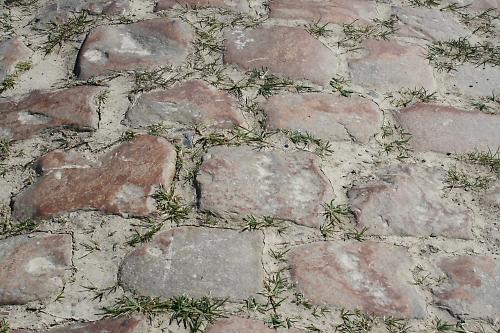 The other trick is to go like stink and get each section of pavé over with as soon as possible. Plus, the faster you go, the more momentum you have, and that’s massively important. Go slow and all those bumps will just kick you back where you came from. You’ll be on there for the rest of your life.

Anyway, Team Sky stuck to the deal and we kicked off on smooth roads at a pretty easy pace. A nice, gentle, civilized ride in the spring sunshine. Lovely! And then we hit the pavé…

The first section was horrible. The jolting and rattling and all that stuff was painful and so was the speed. I’ve ridden pavé on precisely one day of my life before – three years ago, maybe – and here I am trying to get back into it while at the same time keeping up with the whole of the Team Sky Paris-Roubaix squad. And they’re on a mission. Juan Antonio Flecha is here and he’s finished on the Roubaix podium three times. He’s aiming to be in the mix again this year and this is his only recon of the route. These guys aren’t messing about.

About a minute in and I want to change down a gear or two – call it three – but every time I try to get my finger on the lever it bounces. Should have let some air out of those tyres aftter all. My muscles are starting to burn but I’m stuck on this sprocket. I could slow down to change but then I’ll be off the back. Hanging on to a pro cyclist’s wheel is hard enough; chasing down a WorldTour team in full flow… hahahahaha! Not in a gazillion years.

So I just start hoping for the pavé to end. Some of the sections are just a few hundred metres, some are three or four kilometres. I’m begging that this is a short one.

Luckily for me, it’s not too long. And once back on Tarmac, Team Sky relax again. Thank goodness. My heart rate, which had been right though the roof and dancing around somewhere above the TV aerial, starts to come down to a reasonable level. We ride at a normal, everyday pace for a bit. 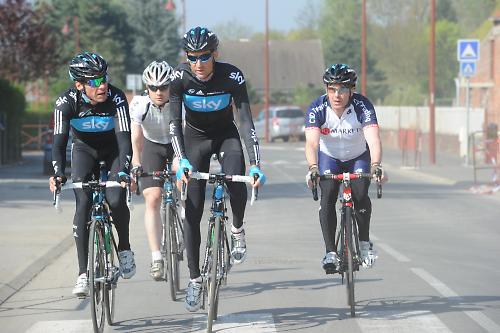 But next it's the Forest of Arenberg.

If pavé in general is ridiculous, the Forest of Arenberg is insane. It’s a pretty long section, the cobbles are particularly vicious, there are badly patched bits… It’s also dead straight so you can’t even hope that it’s just about to end. You can see it stretching out in front of you if you dare take your eyes off the road. It’s evil.

The one saving grace is that it’s dry today – bone dry – so at least I’m not going to slide off in the mud. I mean, there are countless ways in which I could do myself some serious damage, but slipping in the mud isn’t one of them and I’m grateful for that.

Someone goes off the front. Flecha, I think. Although, to be honest, I’m just watching the wheel of the rider in front and trying not to let it get away. I couldn’t even tell you who the rider in front was. I could tell you what his wheel looked like, if that’s of any interest, because that’s all I’m focusing on.

Anyway, we get through the Forest of Arenberg, the one sacrifice I make to it being a water bottle that bounced out of its cage. I didn't see it go. How long does it take to ride? Three minutes? Five minutes? I don’t know. Not long. It just seems like eternity. 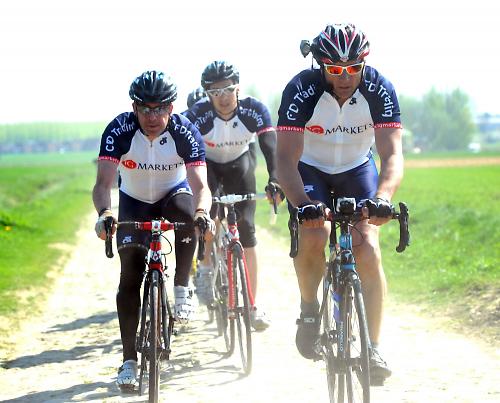 By our third section of pavé, I remembered what I learned last time I rode the cobbles about loosening my grip and just letting the bars to their own thing. Well, not so much ‘remembered it’; I remembered it before, it was just putting it into practice that was the hard bit. But this time I actually manage to do it and life becomes much easier.

I also remembered what Bradley Wiggins had told us when we’d interviewed him. He said the way to approach pavé is to relax as much as possible and focus on applying useful power. He said that in some ways, the more you try, the slower you go. Something like that. I’ll have to listen back to the tape. 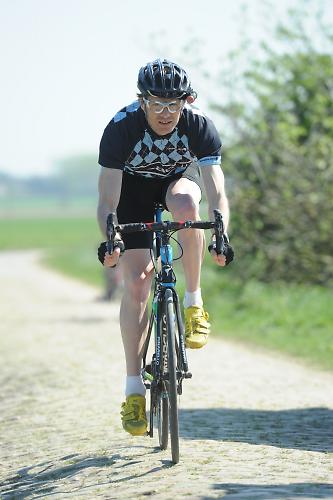 Whatever it was that Wiggins said, it was helping. I was spending less energy holding the bar with a vice-like grip and was feeling much… safer. I started looking for the best line. If I didn’t like the bit of road the Team Sky rider in front was using and saw a smoother bit off to the right, hell, I’m off on my own line. Oh yeah, I’m free-forming it now.

By our fourth section, I’m enjoying myself. By the fifth section, I’m wondering why anyone rides anything BUT pavé. And by section six, I’m fully convinced I could actually power off the front and drop these Team Sky so-called professionals. All of ’em. Delusional, frankly. In reality, they’re barely blowing.

That’s when this little adventure came to an end. After 90mins, it was time to give the lovely borrowed Kobh bike back to Pinarello and let Team Sky crack on with another few sections of pavé. In the nick of time, probably. It was bound to end in tears, humiliation, and a serious amount of crashing and burning sooner or later. But, you know, you get a rush of blood to the head and you believe you’re a world-beater. It only lasts for a second, but it’s a brilliant second.