I hit a badger.

Let's get that out of the way first. In fact I did get it out of the way first, barely five miles into the ride and it ran right under my wheel. It's no wonder you see so many at the side of the road if that's their strategy. A bike's not a car, though, and a badger's a tough cookie, so off it lumbered where it had already decided to go, leaving me on the tarmac in a heap. Thankfully the tarmac in question was smooth as silk and empty of cars, so the only damage was a hole in my tights and various scuffs on bike and limbs. The adrenaline kept me off the front for about the next five miles...

It could have been worse, and it would have been gutting to end a ride almost within sight of the start. Especially a ride like this: 120 miles through the Welsh mountains, through the night. The kind of ride that's almost guaranteed to end up in your best list, or your worst list, depending on what happens. This one was the brainchild of author and tour guide Rob Penn, who came up with the idea after listening to an old boy reminisce about through-the-night club runs on deserted A-roads in the 1950s. It was just an idea until he told Alex from howies, though, who cajoled him into doing it, and helped no end with the organisation. It was for that reason that we were starting from their warehouse in Cardigan. The route was lumpy as far as Lampeter, then lumpy some more through the wilderness of the Cambrian mountains before a long, flattish run in to Hay-on-Wye. The final test was the fearsome Gospel Pass before a 16-mile blast downhill into Abergavenny and a well-earned brekky.

Opinion was divided on the right bike for this particular job. At one end of the scale, there was plenty of Carbon; Trek 5.9s and Specialied Roubaixs and Ribble Gran Fondos. At the other, James from Boneshaker mag and the Bristol Bike Project on an old Rocky Mountain steel tourer with a reclaimed two-tone bell and flat pedals. He rode in plimsolls and a shirt and tie and beat me up all the hills. Chapeau. I was firmly on the fence, giving the Audaxy Jamis Quest a proper long pre-review run-out. Rob, of course, was on his now-famous Rourke 953. Would such a disparate group stay together? 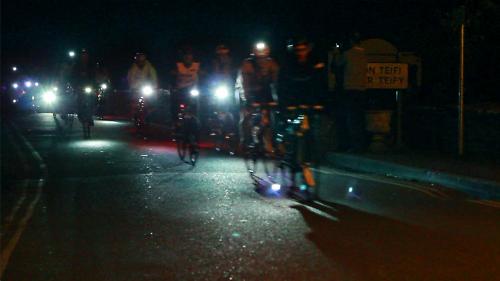 Save for the badger strike, the first stretch to Lampeter was uneventful and taken at an easy pace. The group would splinter on the climbs and then regroup, either naturally or at the ever-present support van: a great big thanks to Rob and Mike the cameraman for following us all through the night. Spirits were high, lights bright. Past the first real stop (I've not tasted many finer things than that homemade flapjack) and through Lampeter it was a left turn into the wilderness, up the Teifi valley and dodging the last of the van-driving, takeaway-tray-throwing idiots on their way home. For the first time, we were really on our own. The van stayed with us, idling behind; there was no traffic to block. Even on the daytime recce of this section, Alex reckoned they'd only passed three or four cars. We probably saw as many houses in the fifteen miles to the reservoir. There's not much out there, and being there in the dead of night with only a sliver of moon is about as far from civilisation as you can be in the South of Britain. Thank goodness for people to chat to. It'd be scary on your lonesome.

The twisting swooping road along the Llyn Brianne reservoir I've done before; on a sunny day it's one of the most beautiful places I've ever cycled and in the dark it's a great ride too. With no light save for the narrow beam ahead of you your other senses are sharpened, ears were pinned for the telltale scrunch of gravel on corners.

Beautiful the Llyn Brianne road may be, but it leads to the Devil's Staircase though, so it gets docked points for that. The back of the Devil's Staircase, at least. There's no 25% hairpins to crawl round going east but it's no picnic, a series of steep ramps and steep-but-not-quite-so-steep sections to 'recover' on. I was out of gears right at the bottom, so it was a full-on grind, with a bit of zigzagging on the steepest sections to take the edge off the slope and a breather half way. Oh, for a triple. It was worth it for the descent down the Irfon valley though, to hit the deserted A-road at Beulah. 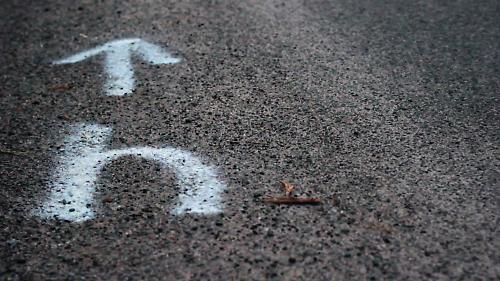 It normally takes me a while to get into a ride, one of the reasons I've decided to try a few longer Audaxes this year. I was hoping this would be ideal preparation for the Avalon Sunrise 400, which loops out over Exmoor before barrelling across the levels on its way to Chepstow. Ideal preparation for the first half of it, any way; exactly how I'm going to churn out 200 day kilometres directly after the 200 night kilometres is a mystery that my legs haven't yet supplied an answer for.

Anyway, at Beulah I was feeling pretty strong and when the chain gang formed on the main road we pushed it on, when it would have been to everyone's benefit to, well, not push it on. With the fit lads going off the front on the rises we were having to dig deep to pull them back on the flats, and by the time we reached Builth I wasn't feeling so strong any more. After we'd warmed our feet on the hand dryer in the public toilets the van arrived with a despondent Alex; he'd mashed his rear mech into his wheel on the reservoir road and no amount of singlespeed tinkering - even liberating a zip tie from a nearby telegraph pole to act as a rudimentary chain tensioner - could get him going again. His ride, sadly, was over.

With the skies lightening we set off down the Wye valley on quiet roads at a quiet pace, back together as group on the flat. And suddenly it was morning. There's nothing more special on a night ride than the point where you've made it through the night and you can navigate by the light of the sun and take in your surroundings once again, instead of peering into the ribbon of light separating you from the blackness all around. Plus, all the badgers have gone to bed. 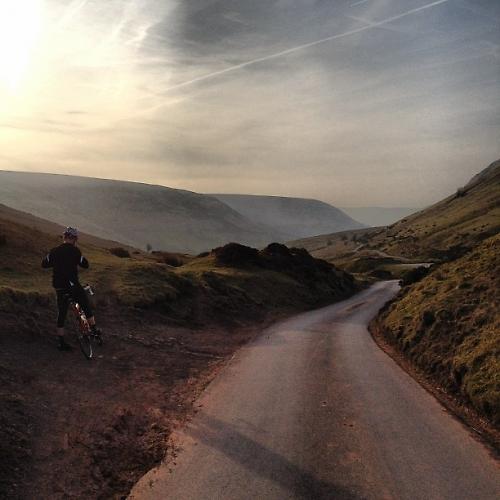 Hay-on-Wye was base camp for the final climb of the day, the Gospel Pass. At over 8km in length and with a 460m ascent it's a real proper climb this one, taking you between Hay Bluff and Lord Hereford's Knob (no giggling at the back) on what is, at 549m, the highest paved road in Southern Britain. Off went the fit lads, again. I tried to stay with them, but the elastic snapped pretty quickly as we settled into the climb, each at his own pace. Save for a couple of really sharp sections it's a reasonably friendly ascent, with ample opportunity to look back over Powys, still lost in the early morning mist, and the sun breaking through above the Bluff. Majestic. 16 easy miles later we were rolling into Abergavenny for the most incongruous finish, a slap up breakfast in the ballroom of the Angel. Never has a more ragtag bunch been acommodated in those opulent surroundings, I'm sure.

Ride through the night and in the morning the whole thing seems like a crazy dream, especially when you're sitting in a ballroom having a fry-up. But we really did it, 192km and over 3,000m of climbing through the Welsh darkness. Massive thanks to Alex and Rob for organising the ride, Rob and Mike for manning the van and filming respectively (I'll post the video soon), and everyone else for making it a night to remember. Definitely one for the best list.