From Germany with love… checking out the urban trends

My first covert scout around the Eurobike halls involved dodging tooled up tattooed blokes and fork lift trucks manoeuvring pallets of bikes still to be put on display ready for the show to open in less than 24 hours time.

My mission was to take some pics and get a general taste of what was going to be on offer for 2013 and try not to get under the feet of the people still dressing the stands. Doing a sneak peek before the show is up and running often allows us to see new things before the bike blindness develops, a symptom from staring at hundreds, possibly thousands of moulded carbon bicycles with swishy graphics everything starts to look the same, mainly because it does. Not much to see over in the hall which is the stables for the beautiful Italian thoroughbreds, they like to swoop in last minute and have normally packed down before church on Sunday.
(pic of empty Italian hall)

I wanted to get an insight to how the market is moving and what we are likely to see on our roads and see how our show predictions from previous years actually match up to the real world. With my vision set to 'magpie' mode I swooped into the behemoth of Eurobike and these were my first observations.

The first thing that caught my eyes were the sharp neon accents on some carbon road bikes, something that Willier has been doing for a long time but now we have more bright colours to attack our retinas, think of a full collection of highlighter pens given to your nephew who has adhd and told he is a graphic designer for a day.
(pic fuji bike with pink detail)

Interestingly, this highly visible colour scheme doesn't seem to have been adopted for any of the urban bikes, matt black with black stickers seem to be en point maybe it is so they can push the hi-viz onto the clothing department?
(pic of black cube bikes against white wall)

I'd like to see more full colour carbon bikes other than the abundance of black or white frames with go-faster stripes and more integrated reflective detailing as part of the frameset, especially for urban/commute bikes. Someone who is doing a bike range possibly sponsored by Crayola is Scott, they have a nice spread of bold coloured bikes, I will be going back to them to have a look in more detail.
(Pic Scott wall)

Fast commute bikes are now featuring on most stands, basically a cross bike with mudguard and rack mounts and less aggressive tyres, none spotted with slick tyres yet though which would suggest that it is more for crossing town than being bullied round a muddy field and hoiked on your shoulder over hurdles. Most of them sporting the now race legal disc brakes, borrowed from there mountain bike siblings. I like the clean lines of a bike with disc brakes and they make sense for a town bike like they do for mountain bikes, consistent all weather braking and your ability for your wheel to still go round even when slightly buckled. My favourite fast commute bike spotted was the BMC GF 02, rugged and light (weighing in at about 8.5kg). Carbon is splodging it's way onto the fast commute crowd with more jelly mould bikes. Cannondale showing off their Quick carbon with a very tall head tube and what looks like a more relaxed geometry similar to a mountain bike. But I do expect to see a lot more if my eyes can still focus on more black bikes. 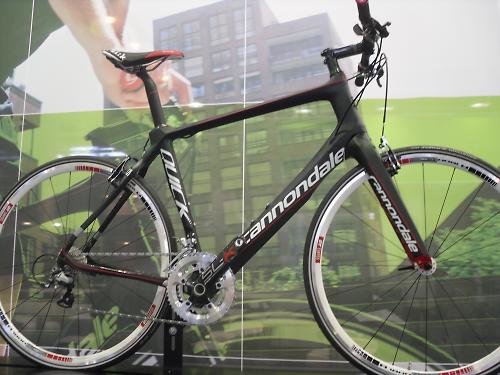 Another thing you can't help but notice is how batteries and motors are bolted on to any type of bicycle mostly in a very unsightly fashion. The electric bike definitely hasn't found it's identity yet and most a cyclist wouldn't be seen dead on but probably are appealing to quite a few non-cyclists and let's face it that's who they are aimed at.
(Pic of any ugly electric bike)

Schwinn had some very pretty traditional looking town bikes with some very robust front racks, not quite as sturdy as the fork lift like Bionicon weight lifter. Unfortunately the racks aren't currently available as an after market accessory but I am sure some similar ones will be found when the Asian halls are scoped. 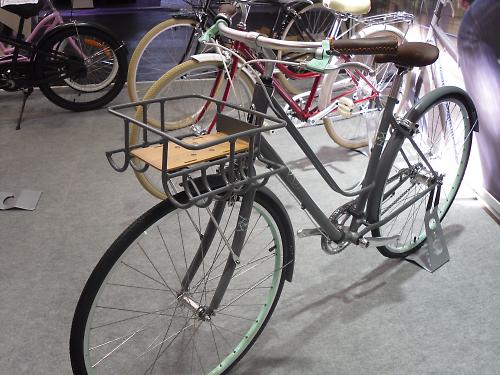 GT had a small but very well thought out 'balls' range of tough urban bikes. Comprising of a coaster brake single speed 'hard ball', a deraileur bike with moustache bars called the 'meat ball' and an 8 speed Alfine equipped steed with triple crown forks which goes by the name of 'eight ball' and a very slick looking fixie which I am not sure comes from the same ball bag but they all have the traditional GT triple triangle frame design for those nostalgic of their GT Zaskar mountain bikes. 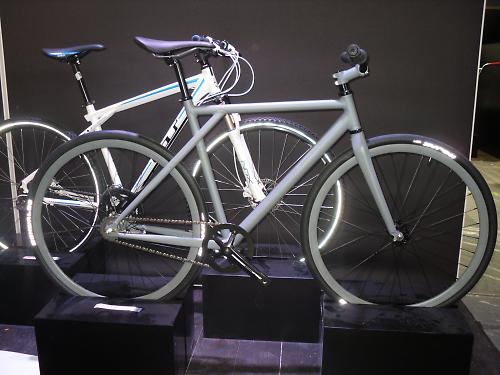 Now where are those little wheel bikes hiding...