VecchioJo compounds his mistake and keeps on skiing.

The third day of going skiing by mistake starts with some panic stretching, just so I can make it down the stairs for breakfast. Most everything hurts from unfamiliar movement, unfamiliar use and unfamiliar hitting the ground - calves, back, shoulders, arms, and especially those bits that join the insides of your thighs to the top half of your body. Those feel tight enough to snap if I cough.

Today we’re taking the bus up the hill (I take note for future reference that it is a very good cycling hill) heading south out of Dobbiaco on the road to Cortina but get off part way up at the café by the Durrensee lake. There’s been more overnight snow and it’s snowing still making everything monochrome and atmospheric. My body has dreamed up some semblance of ability overnight and the skis almost feel like a natural extension of my legs and the snow is less of an alien environment to be found in. By which I mean I don’t fall over immediately. We glide parallel to the road for a few hundred metres before turning left alongside the lake, which is just a large flat expanse of white fading into the mountain, and loop round to the right to enter the woods. We’re the first skiers of the day and so are breaking trail through virgin snow and it suddenly hits me that I could actually quite enjoy this. 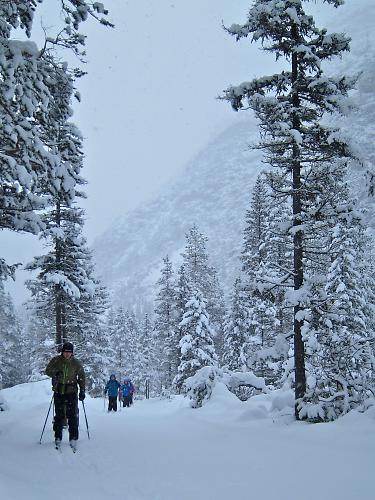 We twist up between the trees, all silent but for the pillowy whumf of too heavy lumps of snow falling off branches, the creak of skis, the soft rhythmic grind of poles and the squeak of the right ski binding, ah, another similarity with cycling, I need these touchstones. After a couple of laps of the woods we cut straight across the lake towards the café, a hard fight despite the flatness through ankle deep snow, and have an early lunch while the Italian army, out on a training exercise practicing a medevac sit stylishly outside having a beer and a fag and the waitress goes all smiley. 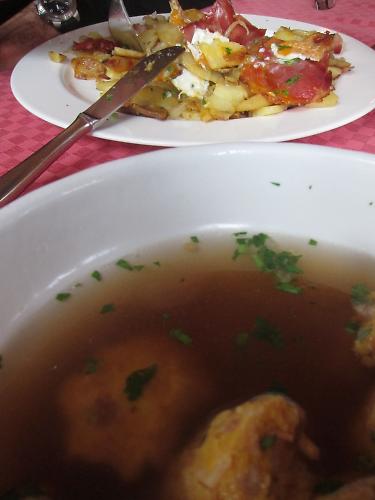 Back out on the piste and I feel like I’ve definitely progressed, I can get into my bindings first time now and there is the smallest amount of control to my skiing, if I think about it really hard and stick my tongue out. The beginner’s method of dealing with things by hitting them with large hammers is gradually abating to make way for the slow sinking in of the understanding of the thousand different nuances that make cross-country skiing work. Like many things, graceful technique will elegantly trounce dumb power, a lot like cycling, the difference between mashing a big gear and souplesse. The sticky new snow does make the descents easier as it moderates speed and tempers the flailing out of control, but the downside is it requires a lot of effort just to keep going on the flatter sections, a pedally downhill you could say. The route down has more ups and downs and twists and turns than we’ve experienced before and each new section successfully tackled is a minor victory. Each crash a major victory for self-doubt and disappointment. But overall the advancement of skill makes it less of a bumbling struggle and actually quite fun, I wouldn’t have said that yesterday, well, until the last half a kilometre where tiredness suddenly hits, and hits hard. We’re back in the stadium and I’m trying to snowplough down the hill that I managed last night, if not with ease, then at least without biffing, and my legs resolutely refuse to respond to commands. Crash. Get up. Try again. Crash. Swear. It’s suddenly become a tough 18kms. Time to give up, endure the usual angry internal monologue and go home, via a hot chocolate. 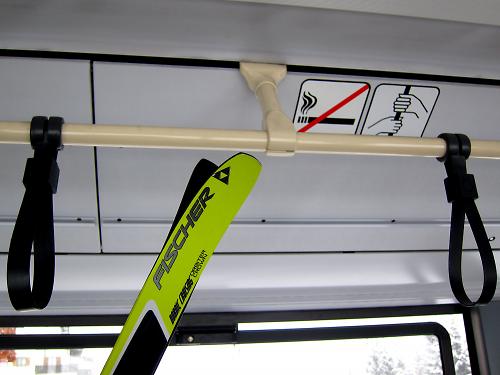 Next day is another bus pass morning, followed by a fumble for our ski passes to be checked by the Loipe Man, and we stride off up the hill into deep white stuff for ten minutes until the piste basher arrives and we have grooves to ski easier in. There’s a vague awareness of mountains surrounding us on three sides but they are only a darker grey feeling in the low cloud and heavy snow, sensory deprivation skiing. Reaching a junction we turn left for a pleasantly long descent that’s just the right gradient for students to be told they should be practicing taking one leg out of the groove and perfecting their one-legged snowploughs along the way, alternating legs so as not to be only any good on one side. We practice, both sides. There is minimal snow chewing. This is good.

After this warm-up circuit we cross the road and up a short steep hill into more testing cross-country territory. And it’s glorious. Once again the technicality of the terrain has been ratcheted up a click, the climbs are longer and steeper, as are the descents, the corners are sharper, and there’s a real feeling of being well away from things, even if we’re only a stone’s throw from civilization, especially when we’re wrapped thick in trees. We piste alongside rivers, across bare white fields, through dark corners of the forest and in the brief moments when I can not think about trying to ski it’s really something special. No clanking ski-lift noise, no shrieking crowds, no Europop from a mid-piste café. Stop where you like and listen to nothing. The only disturbance comes from the mid-80s garishly patterned tops that some of the older XC skiers wear as they glide effortlessly past. 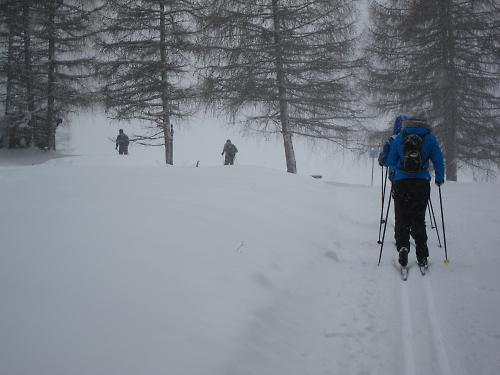 This tougher terrain is all tackled if not with so much panache then at least some semblance of control with a small amount of influence in my own destiny. There are times when I realize I’m getting free speed, or at least not thrashing about and puffing just to keep moving like I was two days ago, like that moment on a bike when you realize you’re gliding rather than forcing the gear. It’s all small but significant steps. At one point I’m happily gliding down a hill and stupidly creep onto the wrong side of my comfort zone, the fast side, but rather than panic and crash because I’m scared and I want to I have a moment of clarity. I’ve ridden down Alpine descents on a bike with silly thin tyres at 50 mph and been in control and not bothered about crashing so I can definitely handle skis at a fraction of the speed with the only hazard being cartwheeling ungracefully into soft snow. It works. I ride out the fear and once the short sharp breathing has subsided and terror sweat has left me I feel quite proud of myself. 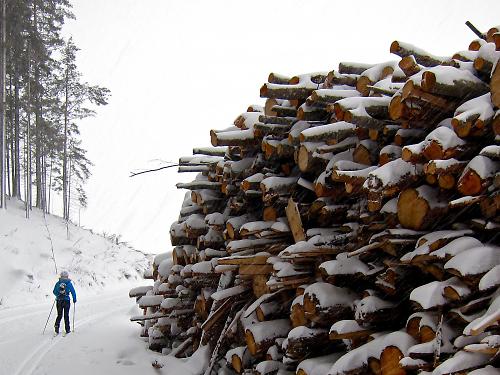 We pass by the Sexten coffee option and strike on through fat dumplings of falling snow to Innichen for a much needed lunch from where we had for home along the same route we did two days ago, the 5 kilometres back to Dobbiaco. But today there is no faltering, no lurching, descents that were scary are slipped down with ease, climbs are tackled with verve and the last little climb into town that previously had me weeping and empty after 10kms I manage to attack with a little bit of a cheeky sprint after a full 23km. Who would have guessed? Get me.