Ronde Van Vlaanderen 2013: From the roadside

Spectating at Ronde Van Vlaanderen is an unforgettable experience. The weekend, with the sportive on the Saturday allowing anybody to ride the same course as the pros do battle on the following day, is a wonderful experience. It’s more than simple bike racing, it’s a festival of everything that Belgium stands for. 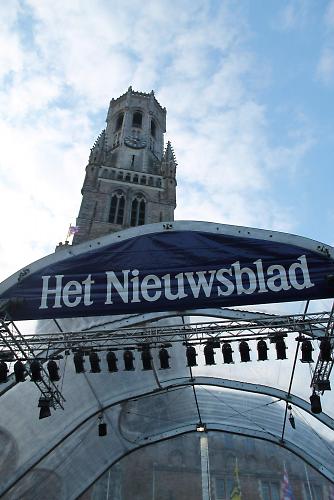 It couldn’t be easier to get to from the UK, especially if you live in the South. The start, Brugge, and the finish, Oudenarde, are but a short drive or train journey from the UK. It’s easier to get here some some places at home. It took us about an 1.5 hours to drive the 170km from Calais to Oudenaarde, having crossed the Channel using the Eurotunnel. It's also possible to get there by train, the Eurostar will get you from Euston London to Lille and there's a well connected local train service to get to Oudenaarde. Oudenaarde itself is a lovely small town with plenty of bars and resturaants, and is home to the Tour of Flanders Museum, a must visit while you're there.

And the race, as with most professional cycle races, is extremely accessible. There’s few other sports that allow you to stand right up close to elite sportsman as they go about their business - the race pass by a matter of inches in front of you. It’s a fact not lost on Belgians. We drove from the start in Brugge along the route (the benefit of a press pass) to the Molenberg and onwards to the Oude Kwaremont, and all the way the course was lined with spectators. In many of the small villages the race passes through, it’s simply that people have walked from their house to the end of their garden path and taken up station to wait for the race, a free event, to pass their home. 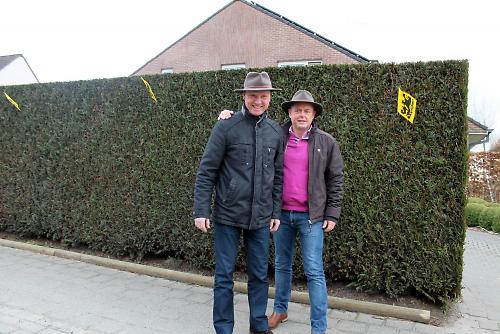 At seemingly innocuous junctions, even early in the race where there’s little real action, aside from the mandatory early breakaway, there’s a huge crowd. But it’s at the cobbled sectors, flat or hill, that the crowds make a beeline for. You gave to get there early if you want a good vantage point. Arrive too late and all the good spots are taken. But the Belgians have a good way of passing time while they’re waiting for the race to arrive: beer. And lots of it. By the time the racers arrive the crowd is merry and when the race procession is a distant memory, the crowds disperse leaving a trail of empty beer glasses snaking alongside the course. 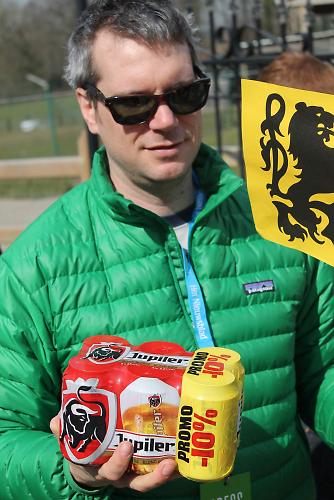 They hand out these flags of Flanders, with a Flemish Lion, everywhere along the course. The Flemish are a proud people, and this flag, with black rather than red claws, signifies the Flemish Movement which aims to protect Flemish culture and history, and for independence. We stopped at a lady was only too keen to thrust half a dozen into my open hands. I willingly accepted. 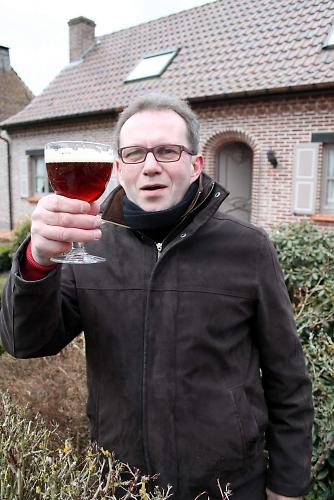 I missed Flanders last year, when they introduced the new course with three finishing laps taking in the Kwaremont and Paterberg. I mourned the loss of the iconic Muur and Bosberg. Having ridden the new course and spectated, I must conclude that the new course does work. Is it better? That I’m not sure. 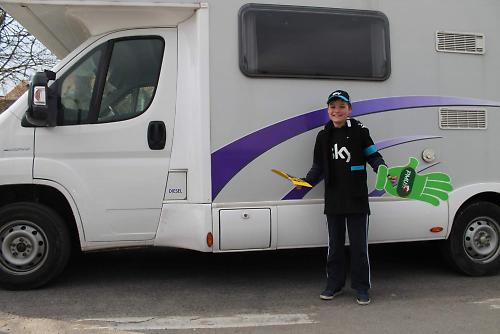 Packed into a small town square in the shadow of the local church and with two big screens, the riders have accelerated up the Kwaremont just a few metres away from us a mere handful of minutes ago, the crowd was loud and passionate in their support for Cancellara when he attacked Sagan up the Paterberg. Moments later a chap scaled the scaffolding supporting the big screen and, when he thrust a Swiss flag into the air, the crowd went crazy. And there was much spilt beer. 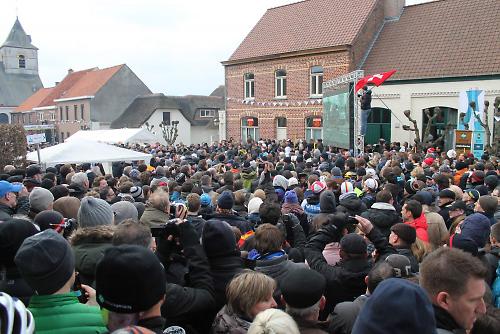 It’s this ease of watching the race and the shared passion for the sport which makes the weekend such a hit with everyone that goes. And it’s no wonder there’s more Brits making the pilgrimage than ever before. Because a pilgrimage it is. To the heart of cycling culture. It doesn’t get any more real than this.