Eurobike Diary – Day Two - Are We Not Bikes? We Are Demo.

Eurobike officially kicks off with the Demo Day, an event based out in the country at Ratzenried where everyone can have a go on a whole bunch of road and mountainbikes, and all sorts of bikes in-between and around the edges. Marked routes are set out to follow and the roads and tracks around the town are pulsing with excited cyclists going as fast as you do on Not Your Bike. 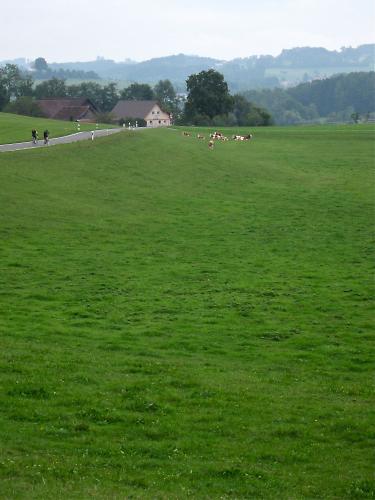 It’s a pleasant 30 mile ride out from where we are and wonderful to stretch legs that have been crumpled in a van for an entire day, and the route there is incredibly pretty which helps remind us why we’re doing this. It’s wonderfully absent of cars and has universally perfect tarmac which takes some getting used to, potholes are pointed out rather than pointed at, I think we saw one. It’s not really a chore, we’re in the foothills of the Alps so the route is just rolling enough to be a giggle and it twists and curves efficiently round farms and through woods, it’s good cycling and every time we come to Eurobike we say that we should spend a few extra days here just to ride around. We never do. 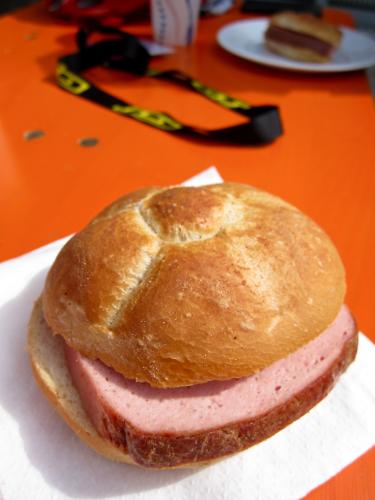 We arrive at the school that serves as the centre for the Demo Day and swoop upon the press centre where there’s food and drink. Rule #1 of bike shows is “If there’s free food, eat it”. Germany is not well known for its stunning cuisine at the best of times, and spending a week in an exhibition centre, another area not generally known for the quality of its sustenance, is a strain on the system, in many ways. It’s mostly ham, cheese, bread and coffee in about 3 different combinations. Maybe an orange juice if you’re lucky, and if you’re really really lucky something with a vegetable in it. Or a fruit. We drink coffee and eat bread product with unspecific meat product in it to bolster us for the upcoming day. 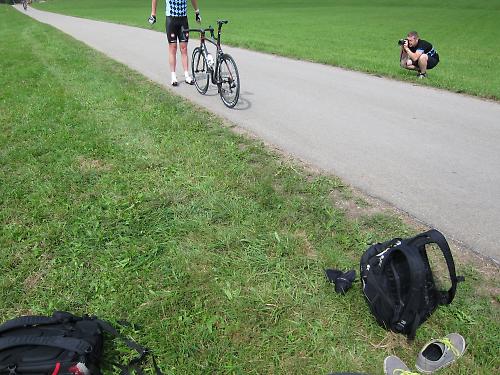 As Demo Day is a free-for-all where anyone can have a go on the bikes the attending manufacturers want to lend out there’s long queues of keen punters waiting for a ride on their dream machine meaning there’s usually some hanging around for the right bike or failing that just grabbing what’s available because it might be interesting. First call of the day is Canyon because they’re always good at handing out things and we snaffle a new road and cyclo-cross bike. We take the necessary pack-shot and relevant detail pictures and then ride them around a bit whilst trying not to get mown down by electric downhill mountainbikes, Japanese men on recumbent trikes and carbon Fatbikes. Once some sort of informed opinion has been made, as much of an opinion as you can gather in fifteen minutes on a bike it’s returned, pedals are removed and screwed into the next demo bike. The top tip is to write your saddle height on a bit of paper so the mechanic knows how high to set it without kerfuffle, you’re making his day just that little bit easier, he will smile at you. 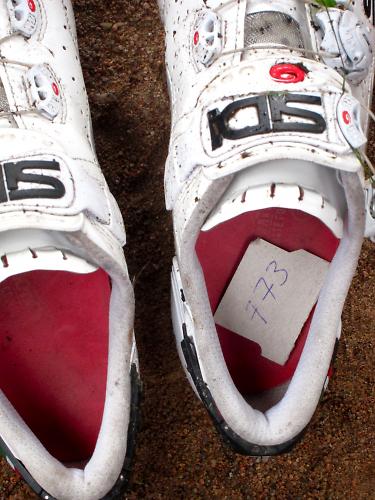 After a Colnago, Ridley, Lightweight and Specialized conveyor belt the ride home is quite looked forward to as a relaxing wind down to the day into a setting sun and a reminder that riding bikes for fun rather than analysis is what it’s all about, but it’s started raining as forecast, and rather quite bucketing. If we were returning to a warm house with a hot bath, washing machine and a hot meal braving it out and being Epic might have been an option, but riding 2 hours in the rain into the dark back to a cramped smelly camper-van, communal showers and a sausage in a roll is somehow less appealing so we shove our bikes in the hold and take the bus back, without any shame at all. 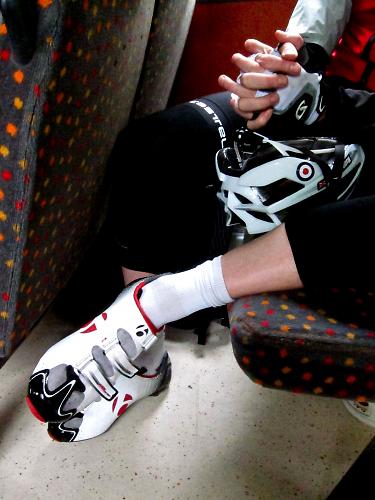 The person that has the keys isn’t at the camper-van on our return so we break in via the storage area at the back and put the kettle on, our ranks have been bolstered by two more staff members, so that’s seven grown men in a six-berth camper-van then. It’s cosy, or likely to induce lifelong claustrophobia or anthropophobia, if anyone wants to move then everyone else has to move to, it can take an hour to make it out the door. It’s not helped by any available space cluttered with overflowing bags, computers, phones and all their associated wires, and also someone left a window open in the rain so alongside the smelly cycling kit hanging everywhere there’s also a lot of wet clothes and damp sleeping bags. Somehow we make supper amongst all of this, well we make half of supper, which is the student favourite of pasta and pesto which we augment with some sausage in a bun from the burger-van round the corner, and a beer, a combination that would make even a Come Dine With Me contestant wince. 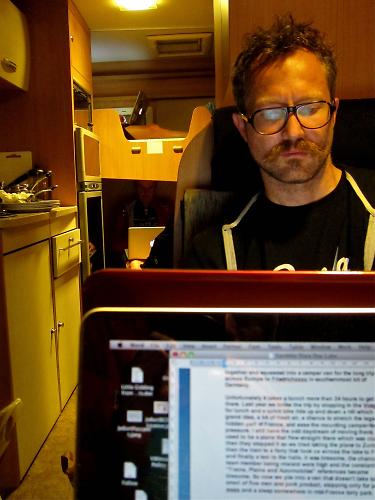 Crammed into any corner all the computers are out because there’s bike words to write, bike pictures to process and bike video to edit and as the rain continues to splatter on the roof talk soon turns to how we’re going shoehorn 7 grown men into 6 sleeping places, only some of which are big enough for anyone over five foot. It’s going to be a long night.