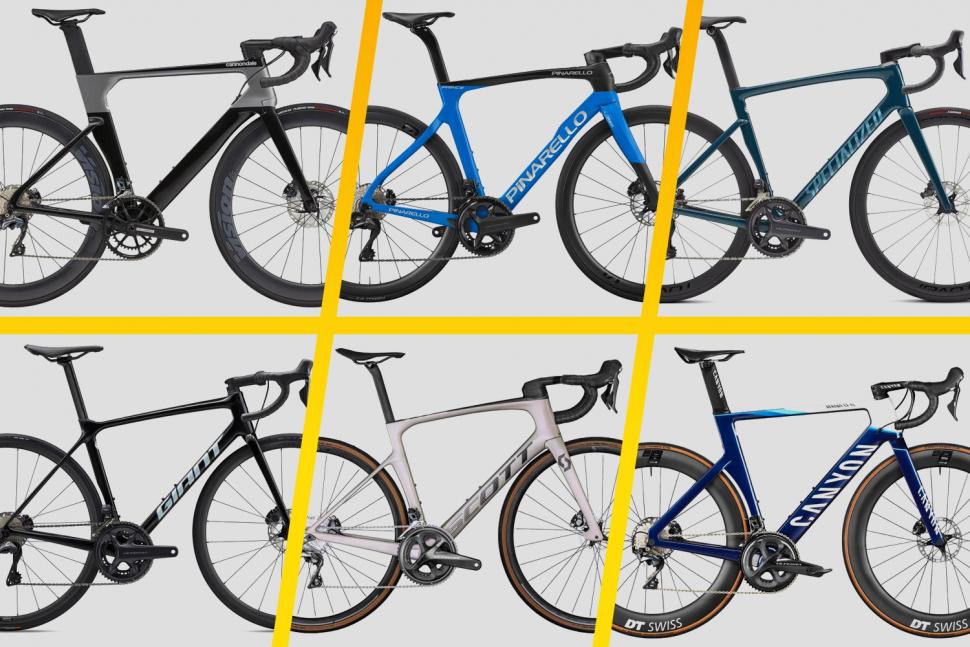 This article contains links to retailers. Purchases made after clicking on those links may help support road.cc by earning us a commission. Find out more about road.cc buyer's guides.

Perhaps one of the most appealing things about professional cycling is that you can buy and ride the very same bicycle that Mark Cavendish sprints to victory on, or the one Tao Geoghegan Hart used to win the 2020 Giro d'Italia. You really can walk into a bike shop and ride away on a bike that's identical. Try doing that in Formula One.

To see what is available, we've had a look at 12 manufacturers to show that you can realistically get a bike that can trace its DNA directly up the chain to those that the professional cyclists are racing. We've focused on bikes that share the same (or a very similar) frame and keep the cost a little more achievable with less posh components. Aside from parts like wheels, transmission and handlebars and stems, these bikes are essentially the same as the WorldTour bikes. 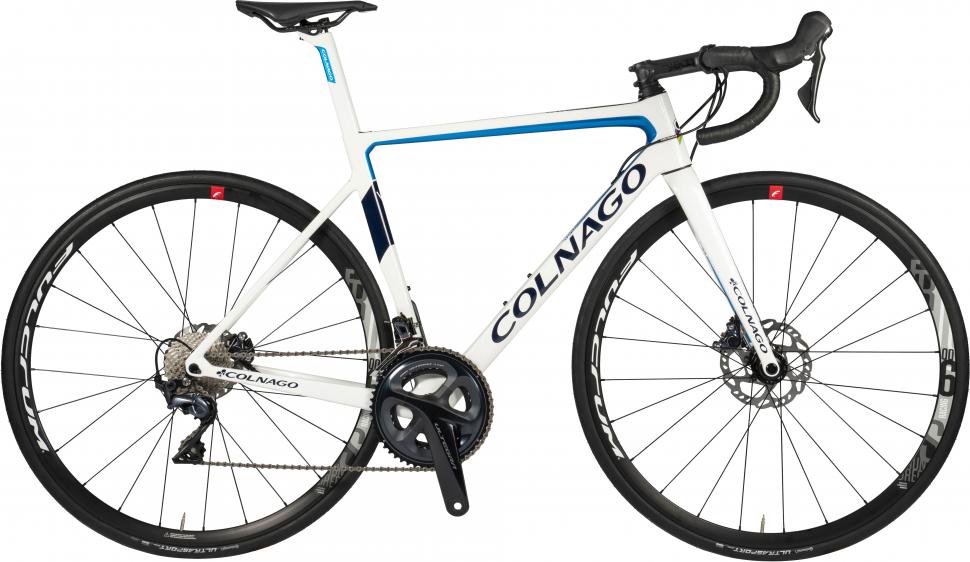 UAE Team Emirates rider Tadej Pogačar followed his 2020 Tour de France win by winning it again in 2021, a year in which he also repeated his 2020 win at Tirreno–Adriatico and won his first Liège–Bastogne–Liège. Those victories came aboard Colnago's V3Rs bike; the V3 is that bike's more affordable kid brother.

The V3 has disc brakes – Pogačar switches between disc brake and rim brake versions of the V3Rs – and Shimano Ultegra rather than Campagnolo Super Record EPS.

While Pogačar has been spotted training on a prototype version of Colnago's next-generation race bike it's not clear if he'll be riding the prototipo at the Tour de France as it hadn't been added to the UCI's List of Approved Models of Framesets as of June 29 2022. 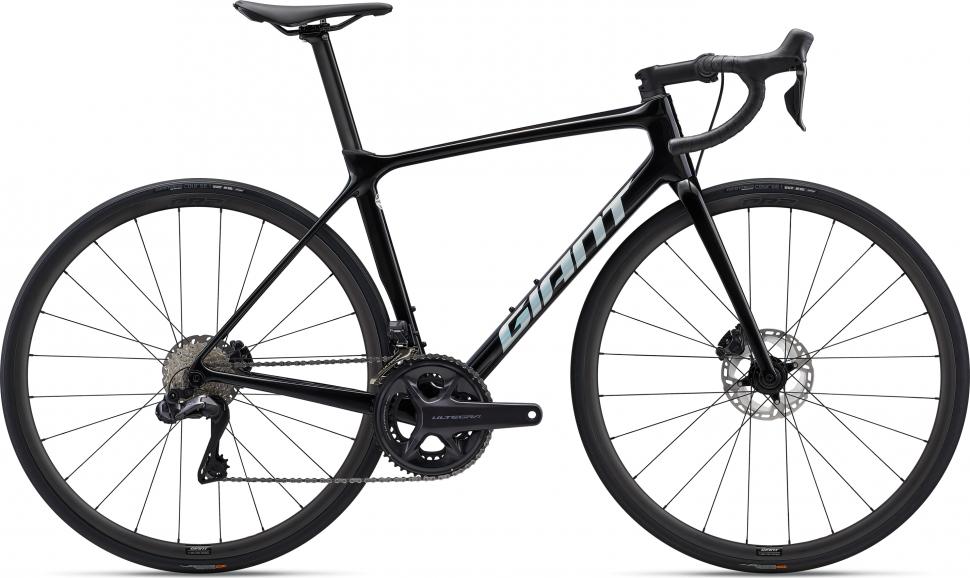 Team BikeExchange-Jayco has switched to Giant bikes for 2022, but the top-of-the-line TCR Advanced SL Disc 0 will put a ten-grand hole in your bank balance so you might well decide to save yourself over six thousand quid by dropping down a bit in frame and components to the TCR Advanced 0 Disc instead.

You still get electronic shifting, but it's Ultegra rather than Dura-Ace, and you still get a light carbon fibre frame even if it hasn't been refined to within a millimetre of its life to quite the same extent as the Advanced SL frame. 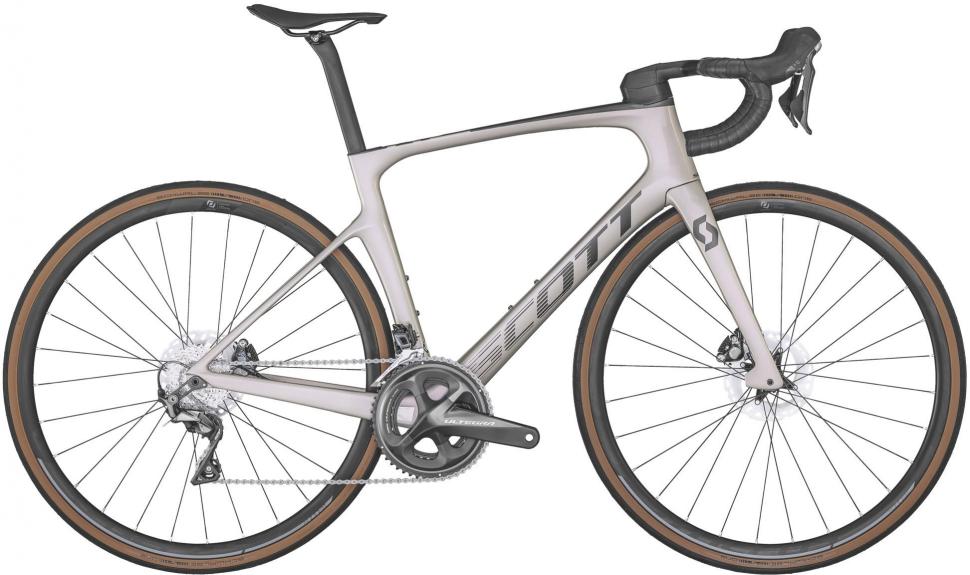 Team DSM are now using the latest version of Scott's Foil aero bike for the flatter stages (you may remember Team BikeExchange, in its former guise as Mitchelton–Scott, was on this machine for a few years).

The full-dress Foil RC with Shimano Dura-Ace Di2 shifting and deep-section C 40 aero wheels will make set you back £9,199, but there's a cheaper alternative. 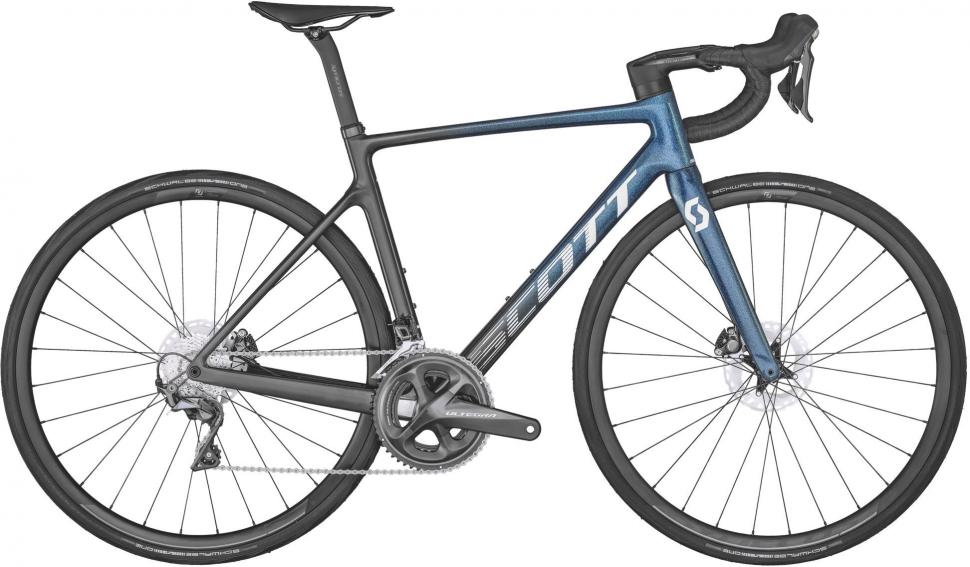 While the Team DSM riders will be aboard a version of the £13,499 Scott Addict RC Ultimate for the climbing days, the Addict RC 40 comes in at a much more bearable £3,799.

The Addict RC Ultimate is a lightweight racing bike that puts the focus on integration. You can read more about the Ultimate over here.

The model the WorldTour team uses is the super lightweight version of the frameset weighing a claimed 790g for the frame and 320g for the fork, equipped with Shimano Dura-Ace components and wheels. The RC 40 has a Shimano Ultegra groupset, Syncros RP 2.0 alloy wheels and Schwalbe’s ONE Race-Guard tyres.

Some of the Syncros finishing parts are also switched with alloy alternatives, such as the Creston iC 2.0 Compact handlebars. 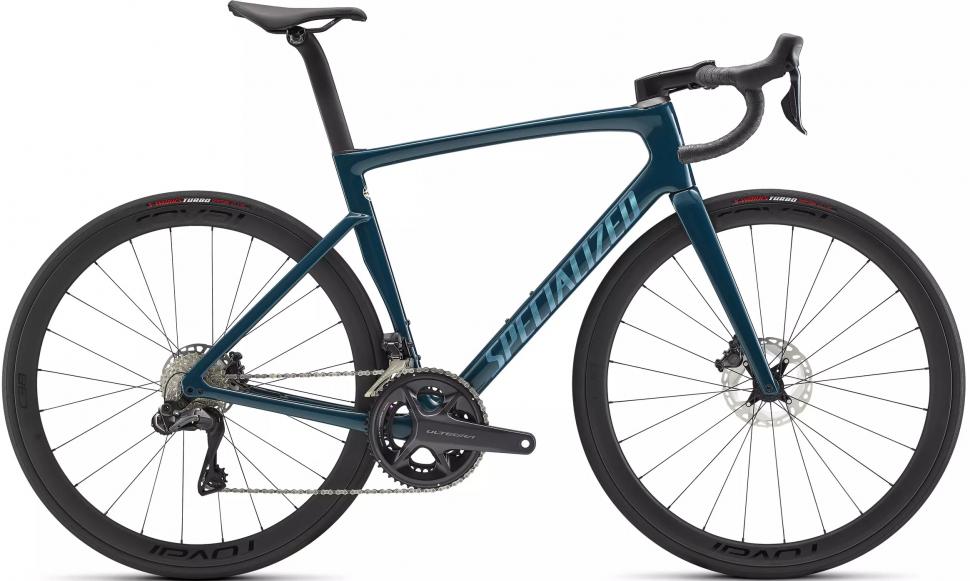 If you want to be Peter Sagan but can't afford 13 grand for a Specialized S-Works Tarmac SL7, here's a slightly more sensible option. The Tarmac SL7 Expert uses the same frame design as the TotalEnergies team's Tarmacs, but laid up in a less expensive grade of composite: Specialized's FACT 10r carbon rather than the S-Works bike's FACT 12r. 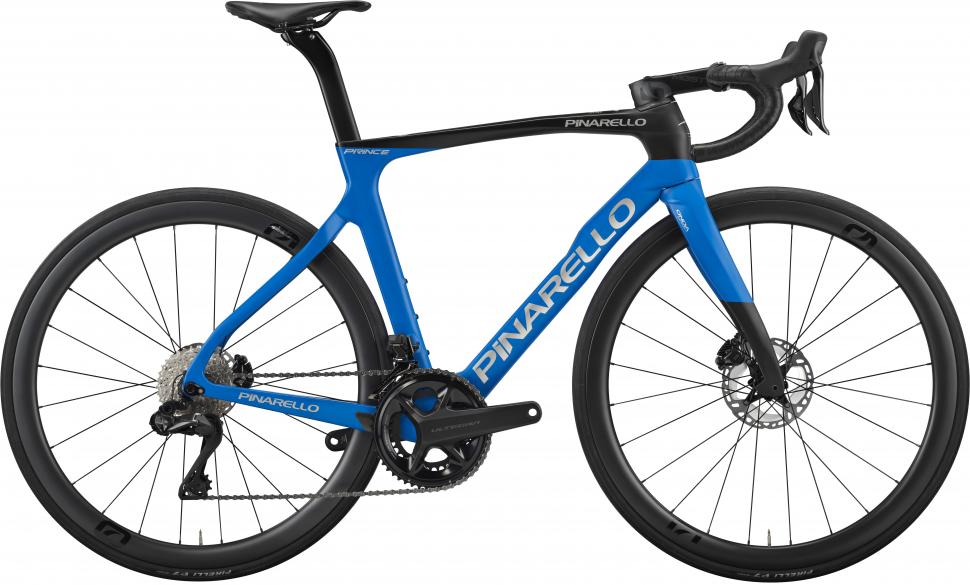 So you desperately want a Dogma just like Tao Geoghegan Hart, but the budget won’t stretch to 11 or 12 grand. Pinarello has your back. Pinarello recently updated the Prince, which continues as a more affordable version of the Dogma. It shares a similar frame profile, but it’s made from a different blend of carbon fibre.

This brings the price down, with a full Shimano Ultegra bike with Fulcrum Racing 5 wheels costing £4,000. To bridge the gap between the Prince and the Dogma series there are two Prince variants, the Prince and Prince FX; the latter uses a higher grade of carbon fibre.

Still a bit spendy? The base model of the Paris is just £3,250. It's allegedly an endurance bike, but it clearly shows the racy influence of the Dogma.

Take a look at the all-new Dogma F the Ineos Grenadiers team is using in this year's Tour de France. 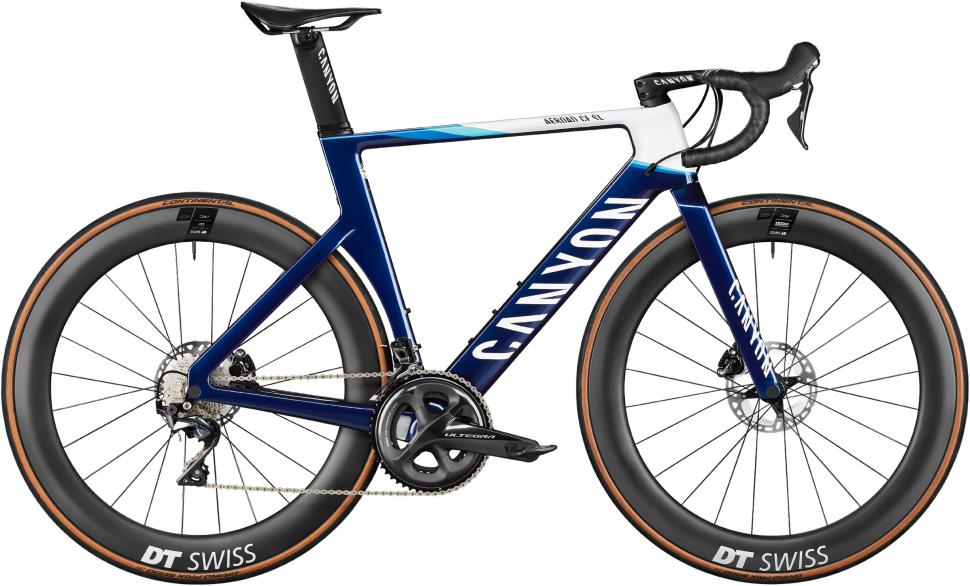 If you want to emulate Alpecin-Deceuninck’s Matthieu van der Poel, then you need Canyon’s Aeroad. The range starts with the £3,249 Aeroad CF SL 7 Disc. The whole Aeroad range now shares the same frame shape as the pro bikes, carved in the wind tunnel. This version is hung with a Shimano Ultegra groupset and DT Swiss ARC 1600 wheels. 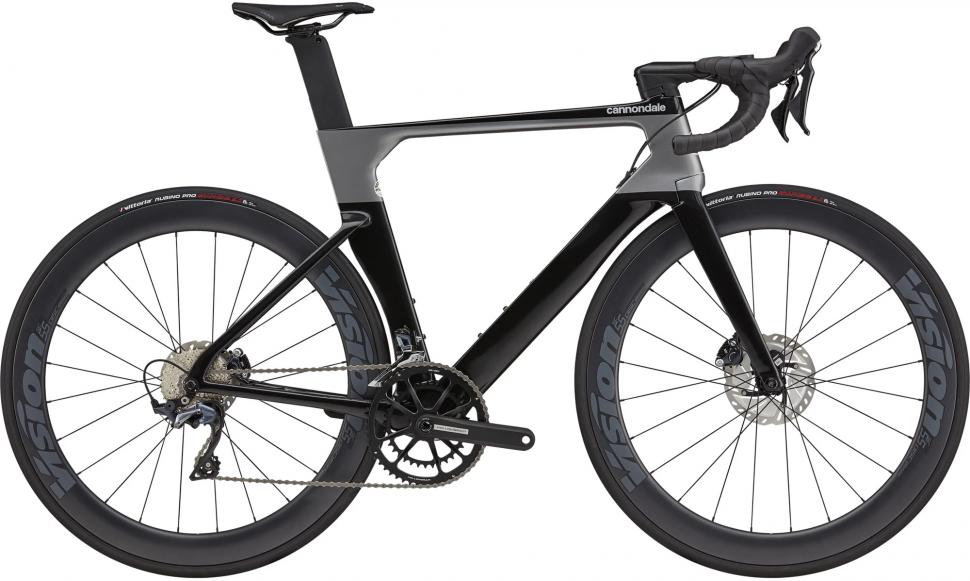 Cannondale claims the SystemSix, the team bike of EF Education-EasyPost (formerly known as Education First), is the world’s fastest UCI-legal road bike but the top model on sale, with Shimano Dura-Ace Di2 components and Cannondale's own HollowGram deep-section carbon wheels, will cost you £11,500. 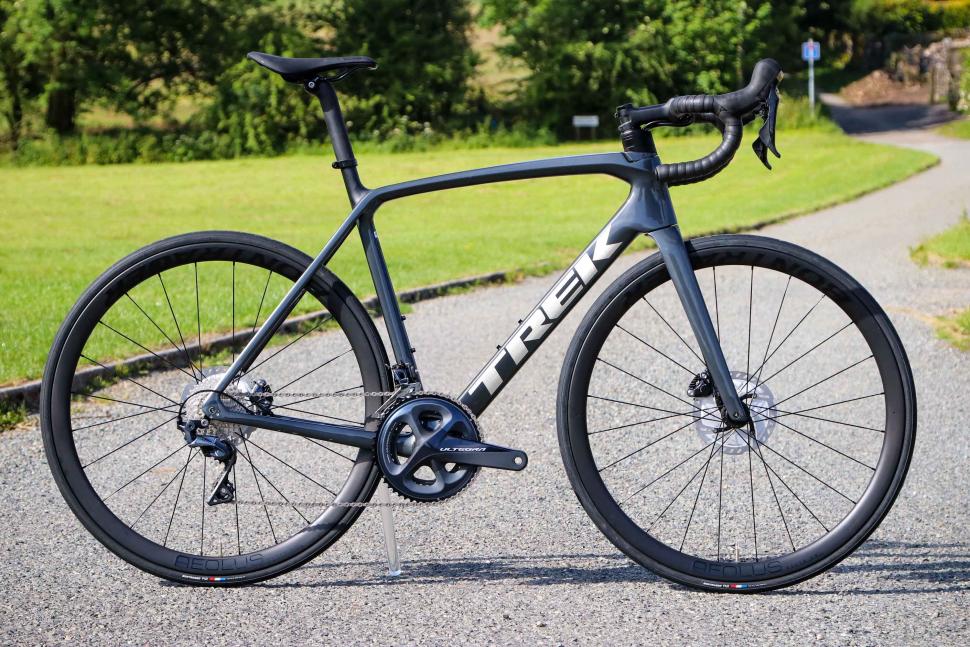 Trek allows riders of its Trek-Segafredo team to choose between three road bikes (Domane, Emonda and Madone) and there’s a large range of models for the public, including this new version of the Émonda.

The latest Émonda isn't just about shaving grams, Trek's engineers having reshaped the frame for better aerodynamics. The aim is to make bikes that use the top-end SLR version of the frame the brand's fastest-climbing ever.

This cheaper version uses the same tube shapes, but swaps out the expensive 800 Series OCLV for 500 Series OCLV, which makes a big impact on the price. 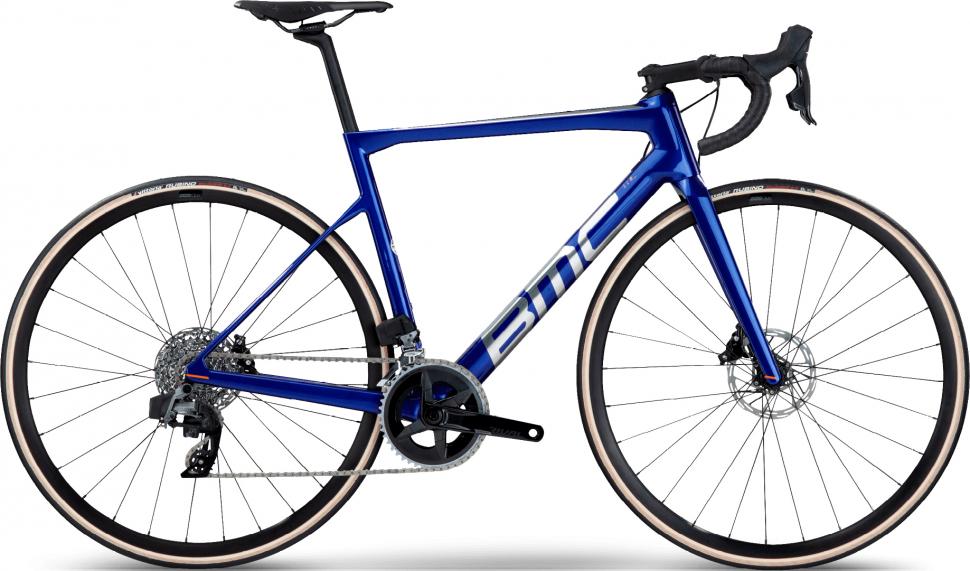 If you want to buy a pro-spec BMC Teammachine SLR01 with Campagnolo Super Record EPS, as ridden by the AG2R Citroën team, you're looking at a whopping £14,500: it's one of the spendiest production bikes in the world.

Or you could get this SLR Four with SRAM Rival AXS wireless shifting and have enough change for a nearly-new small car. The Intermarché–Wanty Gobert Matériaux team are aboard Cube’s Dura-Ace Di2 equipped Litening C:68 X SLT. This is the brand’s flagship race bike with aero-shaped tubes as well as minimal cross-wind susceptibility. You can find out more about the frameset over here.

The Litening C:68 X is available in this cheaper Pro build with a SRAM Force AXS groupset and Newmen Evolution SL R.32 wheels for a more reasonable £5,399. 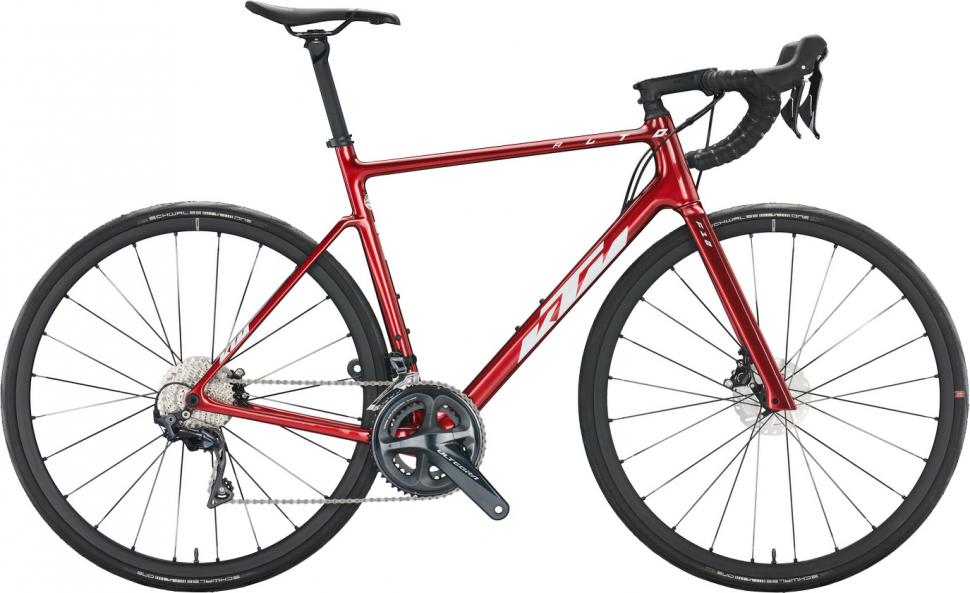 Now this one is a much more affordable option from one of the wildcard Tour de France teams that rode the race for the first time in 2020. B&B Hotels – KTM uses the KTM Revelator Alto when light weight is the priority on the mountain stages.

The French team race on the bike from the Austrian brand with Shimano Dura-Ace components for shifting and braking, while the wheels come from DT Swiss. This people's version comes with Mavic wheels and a mix of Shimano Ultegra and 105 components.