What weather can cause a pro race to be cancelled?

In the light of the cancelling of yesterday's Paris-Nice stage, we look at what has to happen for a race to be binned
by Mat Brett

Yesterday’s Paris-Nice stage three was cancelled after 75km (47 miles) because of snow, but some riders and managers seem to have suggested that the correct implementation of the UCI’s Extreme Weather Protocol could have avoided the need to abort mid-stage.

“Huge shame that the stage was cancelled today but there's no way we can race safely through this,” said Team Sky’s Geraint Thomas on Twitter, along with a picture of a snowy road (above).

He followed that up with, “Maybe there was another road we could have taken to get to the finish, that didn't go as high? And we could have raced #justathought”

Team Giant Alpecin Coach Aike Visbeek said, “The decision to cancel the race was a good one. It was very cold and the road was too slippery with a lot of snow and ice. The riders were relieved with the decision."

That sounds supportive of the decision.

He also said, "Sad there was no plan B to avoid the snow.”

The riders were on the third climb of the day, Col des Echarmeaux, when officials judged that conditions were too dangerous to continue. It was first decided to try and restart the race further down the road in Villié-Morgon but that proved impossible.

”The road was extremely slippery and the safety was no longer guaranteed,” said Christian Prudhomme, cycling director at race organiser Amaury Sport Organisation (ASO). “We are sorry. That's Paris-Nice.”

If you’re the sort of person who takes the Velominati rules seriously (we’re not) you might not have any truck with abandoning a race because of bad weather.

Rule 9 states, “If you are out riding in bad weather, it means you are a badass. Period.

"Fair-weather riding is a luxury reserved for Sunday afternoons and wide boulevards. Those who ride in foul weather – be it cold, wet, or inordinately hot – are members of a special club of riders who, on the morning of a big ride, pull back the curtain to check the weather and, upon seeing rain falling from the skies, allow a wry smile to spread across their face. This is a rider who loves the work.” 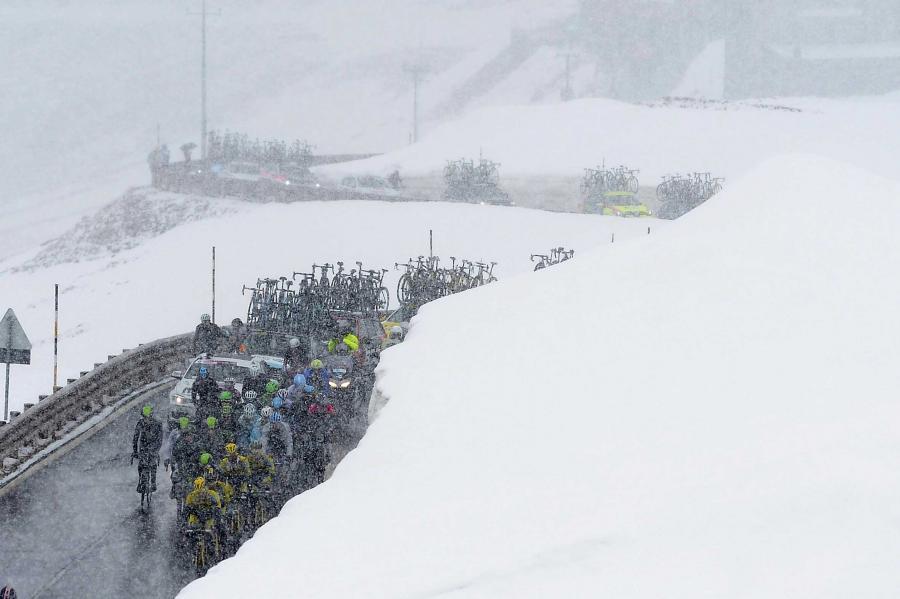 There are, of course, many examples of pro races continuing in atrocious conditions. Thousands of them! Bernard Hinault got so cold while winning Liège–Bastogne–Liège in1980 that it was three weeks before he could move two fingers of his right hand properly.

Andy Hampsten took the lead in the 1988 Giro d’Italia while riding the Gavia as snow fell heavily and went on to win the race. There are thousands of other examples.

The UCI, Cycle sport’s world governing body, now has an Extreme Weather Protocol that was drawn up after exceptional conditions in several high profile events.

During stage 16 of the 2014 Giro d’Italia riders had to deal with snow on the upper parts of the ascents of Passo di Gavia and the Passo dello Stelvio. There were rumours that the descent from the Stelvio would be neutralised, although that did not in fact happen.

Possibly as a result of the confusion over whether or not the descent was neutralised, Nairo Quintana and Pierre Rolland managed to get clear of the group containing race leader Rigoberto Uran. Quintana went on to win the stage and the overall general classification. Uran lost 4:11mins to Quintana that day and was only 2:58mins behind Quintana in GC at the end of the race. 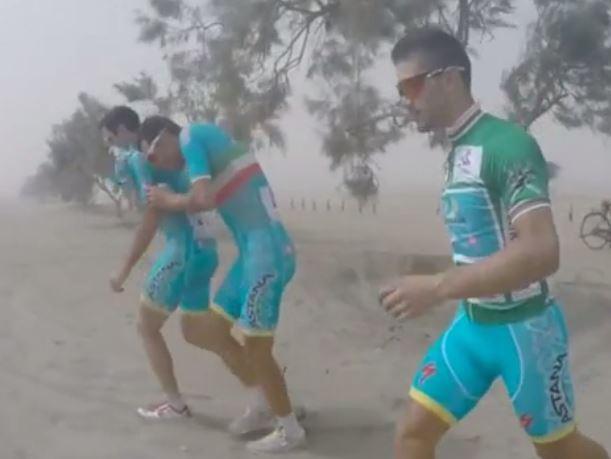 In contrast to the Paris-Nice snow, stage five of last year’s Tour of Oman was stopped because of strong winds, sandstorms and temperatures of over 40°C, and riders staged a protest. The heat had caused tyres to puncture.

The Extreme Weather Protocol relates to a wide variety of circumstances: freezing rain, snow accumulation on the road, strong wings, extreme temperatures, poor visibility and air pollution, and it is founded on the principle that “the safety and the health of riders [is] an absolute priority.”

The protocol requires “the compulsory convening of a meeting between the stakeholders (organisation including race doctor and chief of security, riders, teams, President of the Commissaires Panel) when extreme weather conditions are anticipated prior to the start of a stage.”

The meeting can be convened at the request of any of the named representatives.

Depending on the type of conditions encountered, the start venue and/or start time can be modified, as can the finish venue. The course can be altered and the stage/race can be neutralised or cancelled.

It appears that there was no backup plan for stage three of Paris-Nice and that conditions caught the ‘stakeholders’ mentioned above on the hop.

Lotto-Soudal’s André Greipel doesn’t seem to think that the conditions should have been too much of a surprise.

“A shame with all the technology we have nobody can make a decision be4 the stage as our team knew that there will be snow at the feeding,” he Tweeted.

It appears as if having an Extreme Weather Protocol is one thing, but implementing it is another.

Is that a fair comment? Or has Paris-Nice simply been the victim of unlucky circumstances this week? We’re interested in your comments.