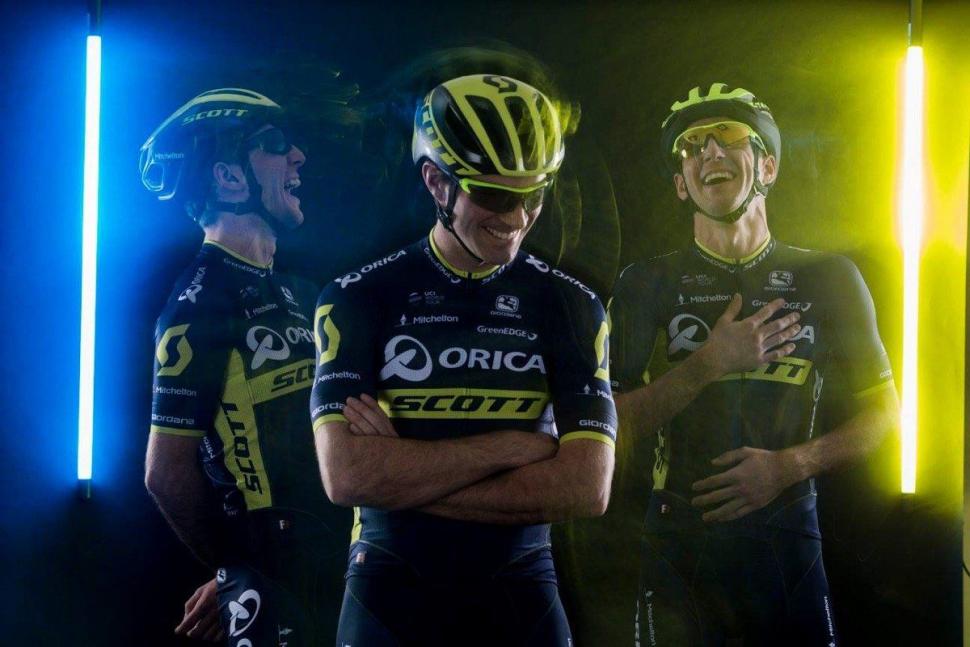 2017 UCI WorldTour kits: The good, the bad and the fugly
by Mat Brett

The 2017 race season starts in less than a month and if you want to know what's going on in the peloton you need to know who's who.

Here's our guide to the kits that the big teams will be wearing. 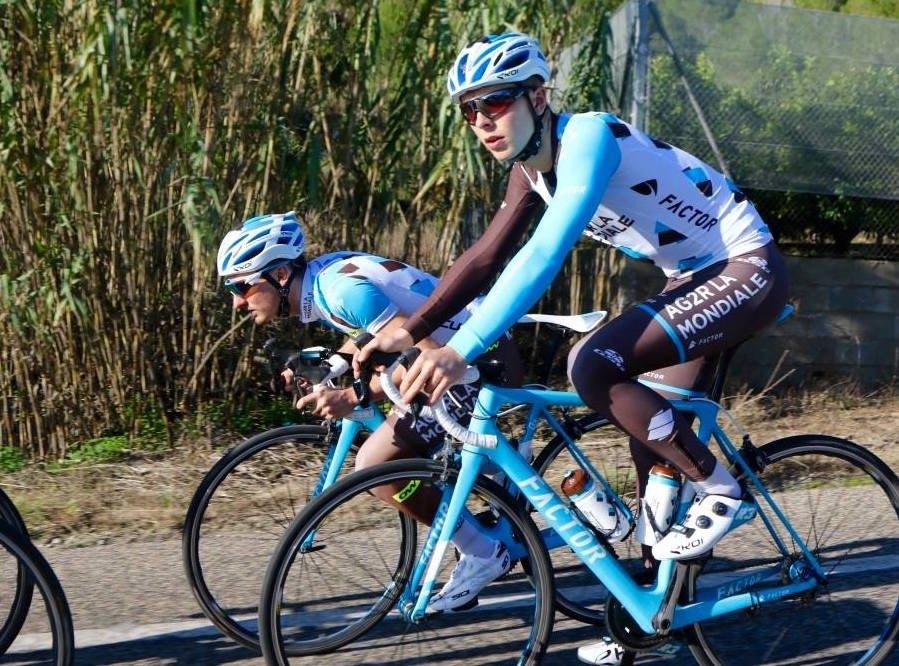 Brown shorts? Who’d opt for brown shorts? AG2R La Mondiale riders have been working the look for years and 2016’s asymmetric sleevage remains for 2017 too. It’s a ker-azy concept but we have to admit that it works alongside the sky blue bikes… speaking of which, the team is switching from Focus to Factor for 2017, and they look stylish too. As well as swapping from Specialized to Argon 18 bikes for 2017, Kazakhstan’s Astana has switched from Moa to Giordana as technical clothing supplier. The jersey remains predominantly light blue but there’s less yellow on the collar and a yellow band has been added to the right sleeve. The shorts are now grey/black with a yellow band on the left leg. 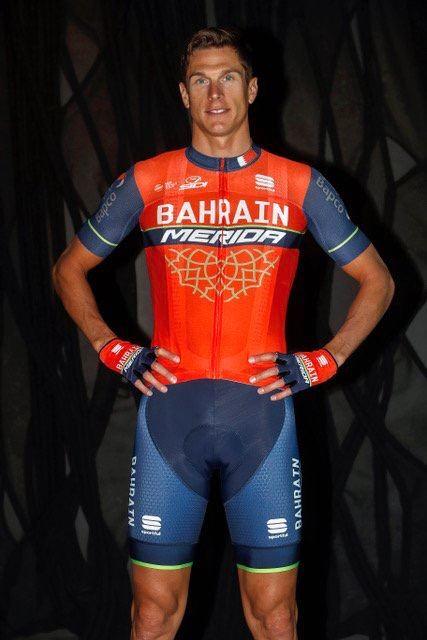 Fair play. The Bahrain team’s colours are red, blue and gold, and Merida’s corporate colour is bright green. Working with that lot could give a designer some sort of breakdown and result in a right old shambles (see Lampre Merida’s pink, blue and green fusion from the past couple of years) but this Sportful kit manages to look classy.

When you open that zip on a hot climb it’s going to say ‘bah’ on one side and ‘rain’ on the other, which is the sort of thing you might see written on a novelty umbrella.

Just an observation. We’ll move on…. 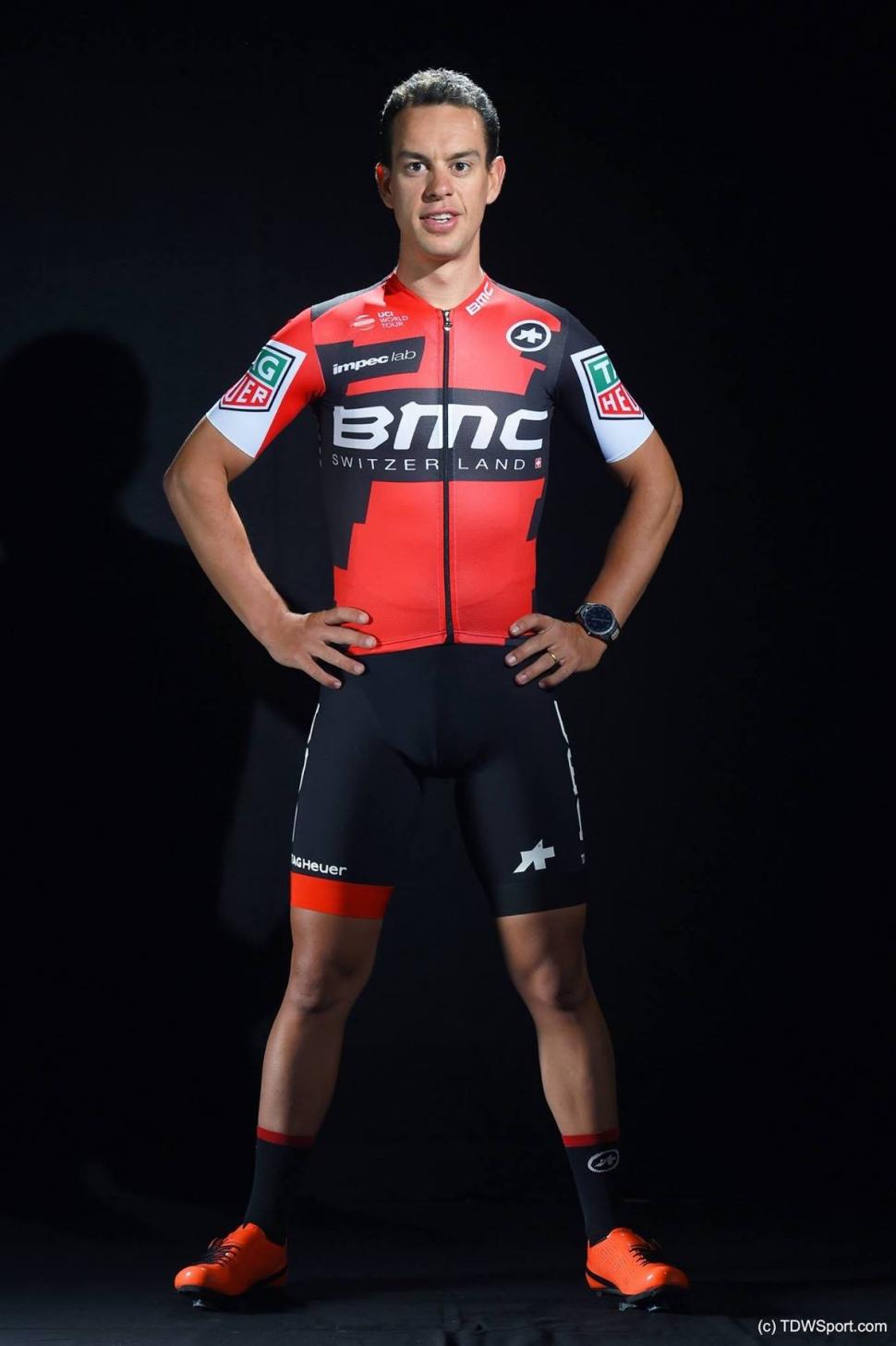 Oops! We’ve disturbed Richie Porte halfway though a performance of the Macarena, a skill for which he is admired and feared in equal measure. We’ll only be a sec.

BMC will be rocking Assos kit for 2017, having made the switch from Pearl Izumi. The biggest change to the appearance is the addition of white panels on the sleeves and whopping great Tag Heuer logos. They look like a bit of an afterthought, but you can hardly miss them, and we guess that’s the point. In the remote chance that you did fail to spot the marketing, the team members are all wearing smart new watches in the publicity shots, so good for them.

Back to it Richie. 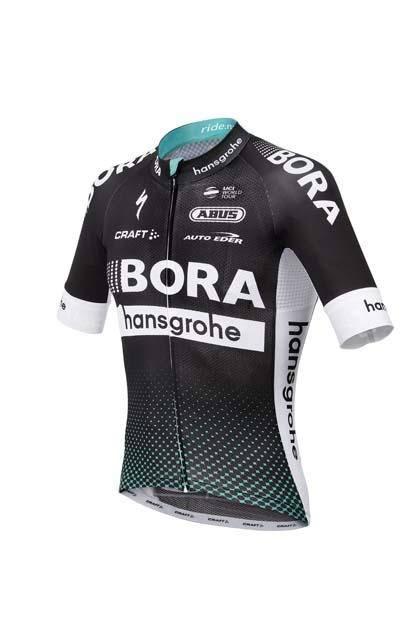 Bora-Argon 18 is now Bora-Hansgrohe, the Argon 18 bike brand having headed off to Astana. The Craft kit is black, white and green whereas there was a lot of red in there before. We have to say that it doesn’t really do it for us – it’s just a bit dull – but, clutching at straws, we guess fans of dots will be happy as Larry.

“Red and green should never be seen without a colour in between.”

We admire Cannondale’s flagrant disregard for traditional fashion advice. Rules are for fools.

Castelli no longer supplies Cannondale-Drapac, having made the jump to Team Sky, so performance clothing supplier duties now fall to Poc. The team is sticking with the green argyle for 2017 and rightly so. It’s a strong look! Fierce.

Mark Cavendish’s Team Dimension Data for Qhubeka has more green on its jersey than before, subtle hands in the stripe on the back symbolising the children who receive help through the team (the aim is to help mobilise people in parts of Africa).

Solid and stylish. this kit might not be vying for a top spot in the league, but it's definitely capable of a good cup run. 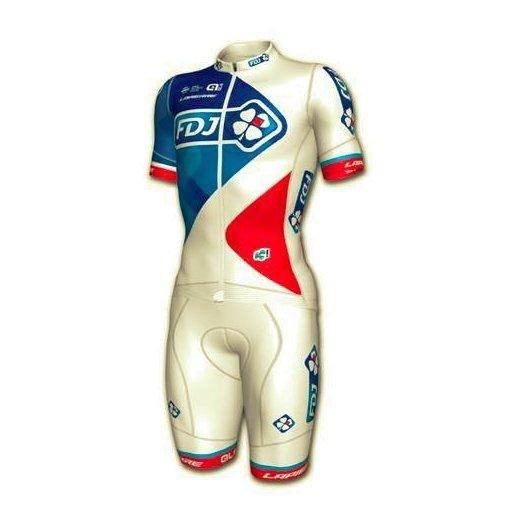 Alé has taken over from B’Twin as clothing supplier to French team FDJ although the design remains very similar to before. White shorts? Okay, if you’re sure. Just be careful when it rains. No one needs to see that. 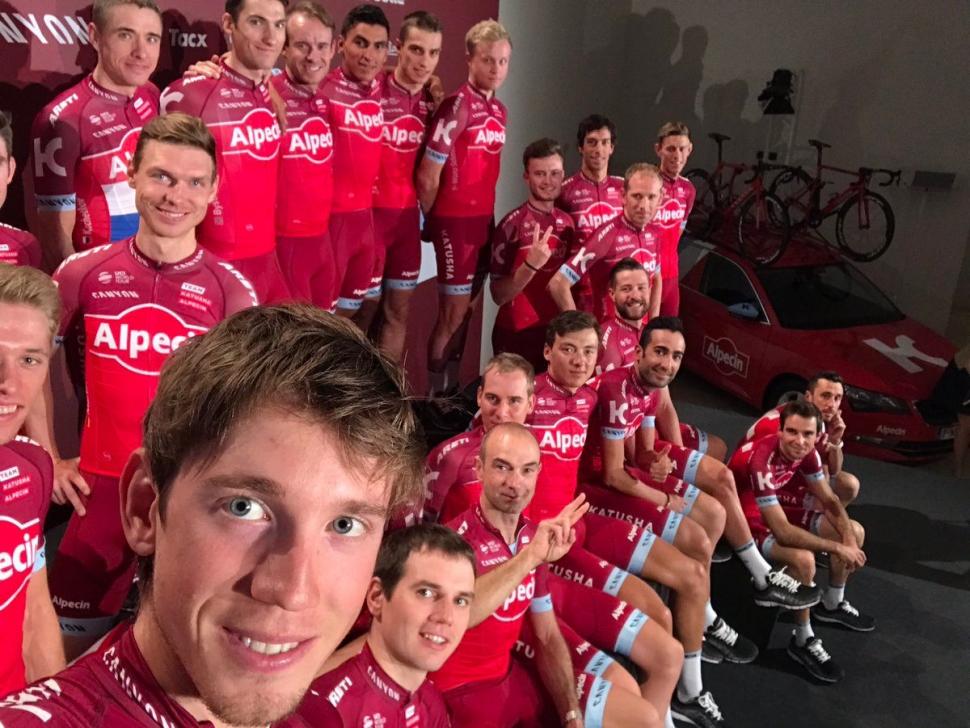 Russia’s Katusha has had a couple of, let’s be honest, absolutely shocking kits in its relatively short history. This one, though, is bold and distinctive. Some critics have gone so far as to say that the team kit has gone from ‘horrendous’ to ‘not too bad, actually’ over the past couple of years.

Oy, you at back: that means something different over here. Stop it. Katusha used to have a silhouette of the Kremlin on its jerseys, but binned it off last year. UAE Abu Dhabi has stepped into the silhouette void with a representation of the Sheikh Zayed Grand Mosque. Obviously. We’re not sure the full splendour of the architecture translates that well onto a synthetic cycling jersey but, hey, the bike looks pretty cool.

Really proud to show you guys my new team colors for the next two years. @LottoJumbo_road pic.twitter.com/i1HOkGrwJg

The Dutch LottoNL-Jumbo team has switched from Santini to Shimano clothing for 2017 – it's branded as S-phyre. The numbers on the lottery balls across the chest remain the same as before: 24, 2, 6, 37, 15, 45. If all those numbers come up one week there will have to be some sort of enquiry. 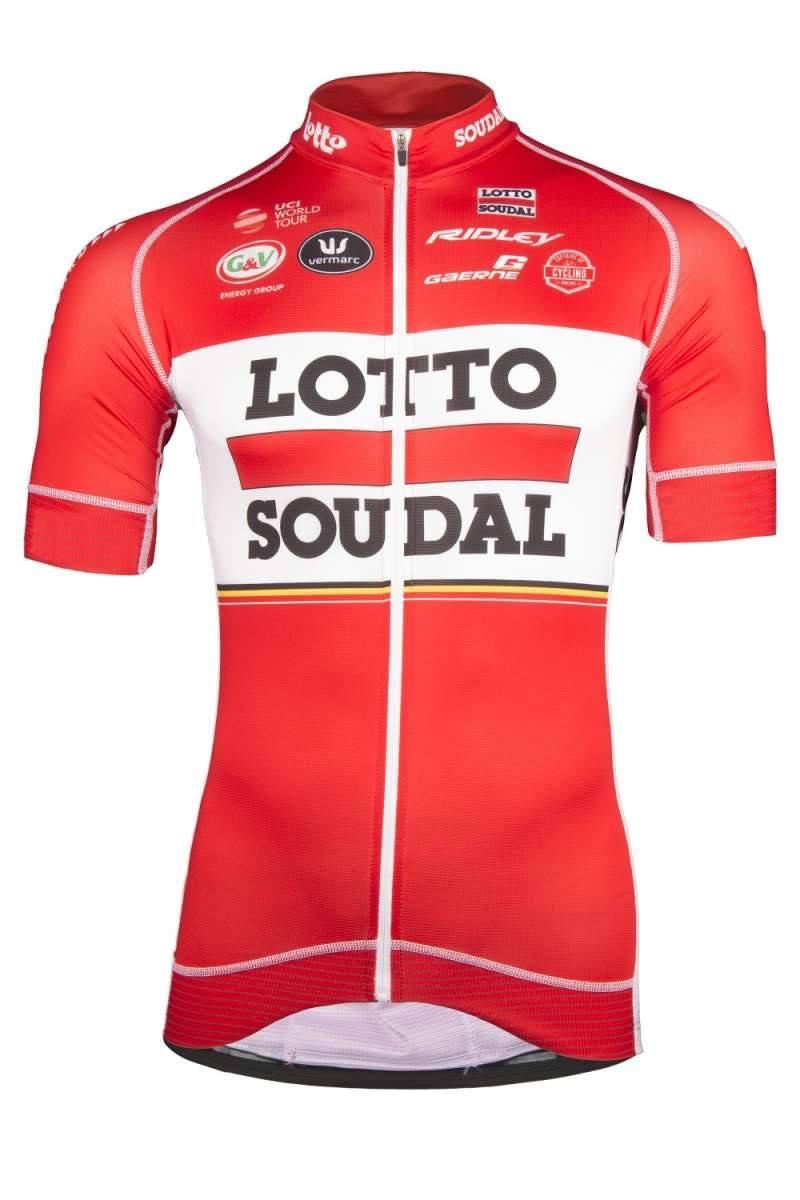 Lotto-Soudal’s jersey is the same but different for 2017. A few of the logos have altered but not much else. Have a guess at why the team logo is now repeated high on the chest. Give up? Selfies. No, really. What is the world coming to? First man buns, now this. 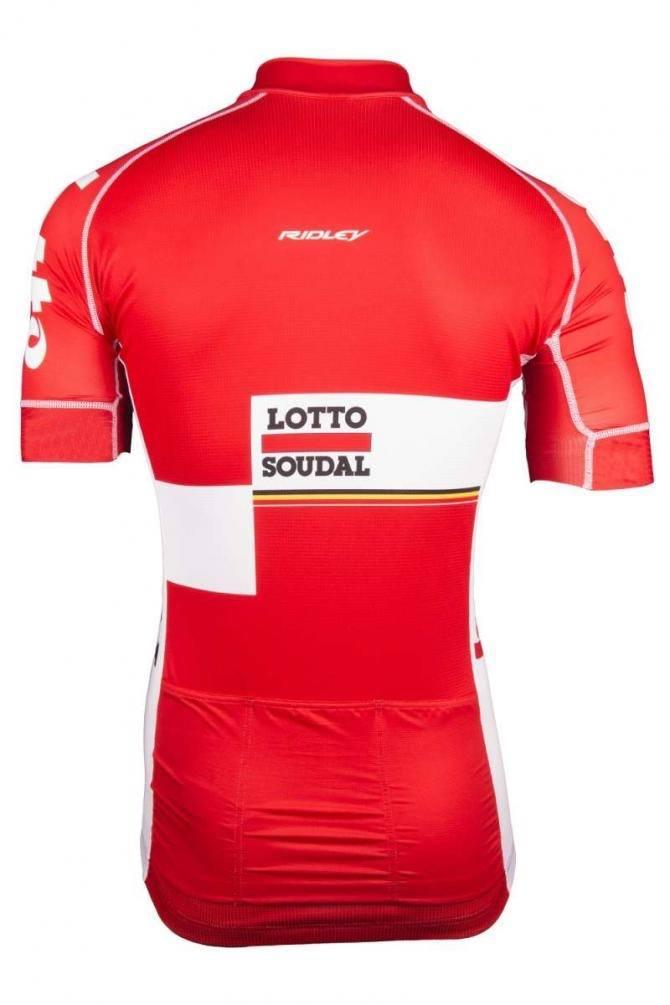 That design at the rear, which looks like a printing error, is really going to wind up the OCD sufferers among us. Movistar has tweaked the design of its Endura-made jersey so it’s a little less fussy than before, but it’s still instantly recognisable with the huge green M across the front. We swear that M gets bigger every year and it’s now spilling off the sides. If it gets any bigger it’ll turn into a V, and then where will we be?

The kit looks pretty cool to us, you’d think they’d be a bit happier about it. Crack a smile lads.

“…so the doctor says, “There's my thermometer! Now where the hell did my pen go?”

Arguably, this is taking the smiling thing too far. 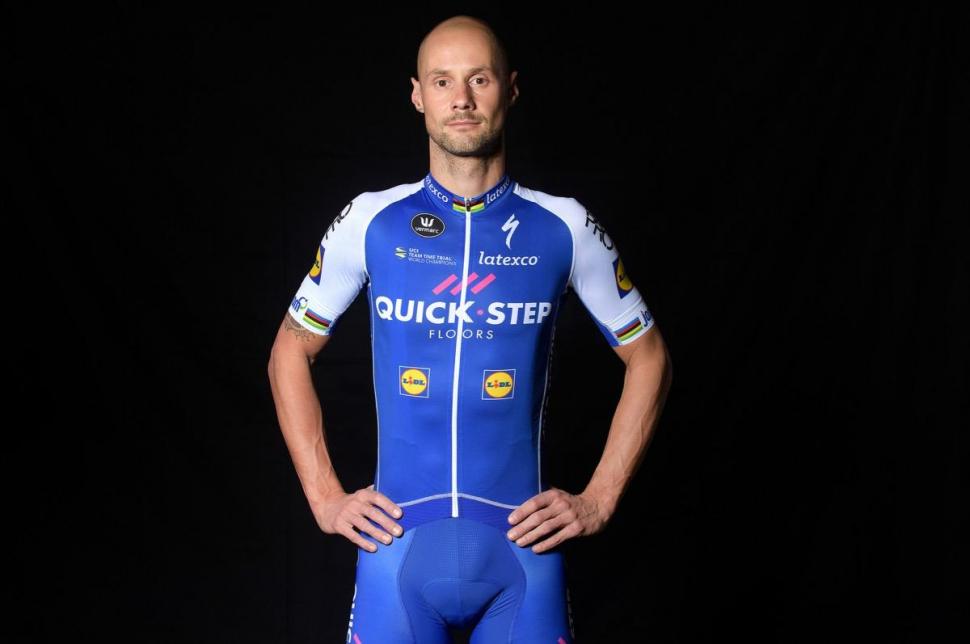 Hang on! Didn’t we have this jersey a few years ago? [Checks archives] It’s quite similar to the Quick-Step jersey of 2011, and Tom Boonen is still in the squad. Surely he could have just gone up in the loft and got his old one out again.

Does that make the kit dated, classic, or retro? It’s so hard to tell these days. It’s blue and white, we can tell you that with a reasonable degree of certainty. Sky announced to the world last month that it was swapping from Rapha to Castelli, and the world, having known for months, pretended to be surprised. The placement of the scorpion logo up on the shoulder looks a bit squeezed in but it’s in a good position for those head-on action shots. Always thinking, those marketing bods.

It’s obvious when someone points it out, isn’t it? 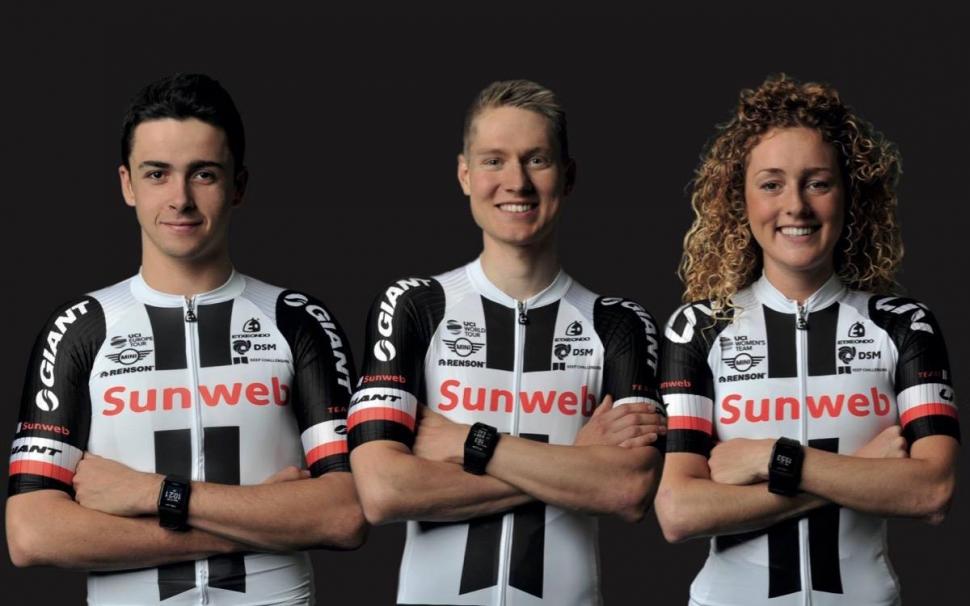 The Alpecin half of Giant-Alpecin has jumped ship and headed for Katusha, so no more free caffeine shampoo for this crew. Baldness could be on the horizon. Sunweb is a holiday company and we have just a sneaking suspicion that Polar heart rate monitors might be involved in some sort of team deal. 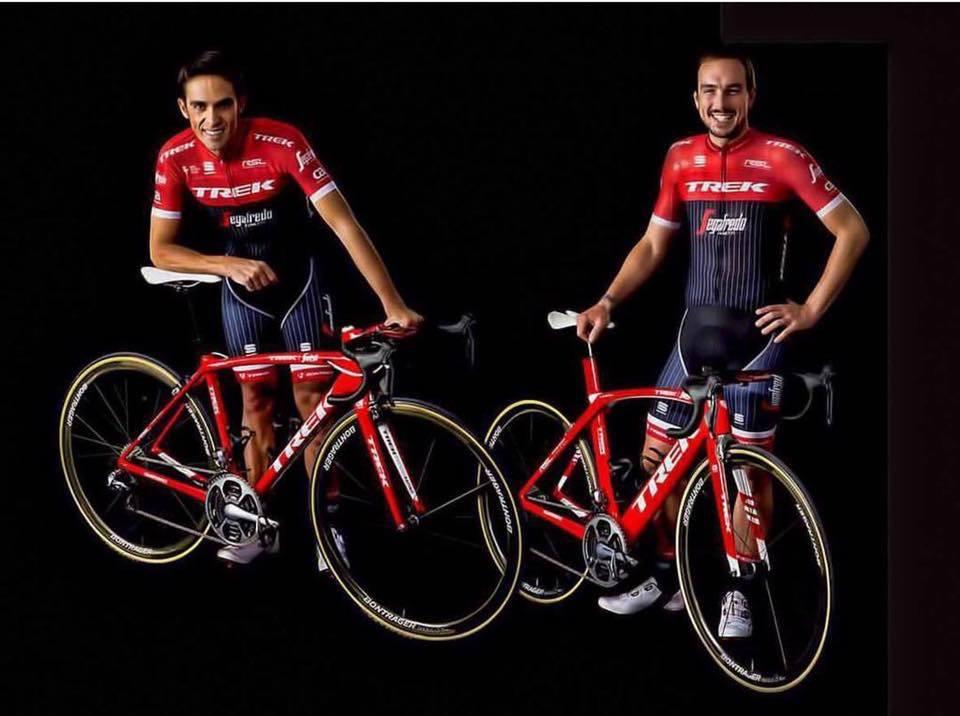 Trek has been big on pinstripes for ages now, doggedly ignoring market trends and ploughing its own furrow. Perseverance: we like that. For 2017 the designers have switched from red logos on a white background, to white logos on a red background. When will this madness ever end? 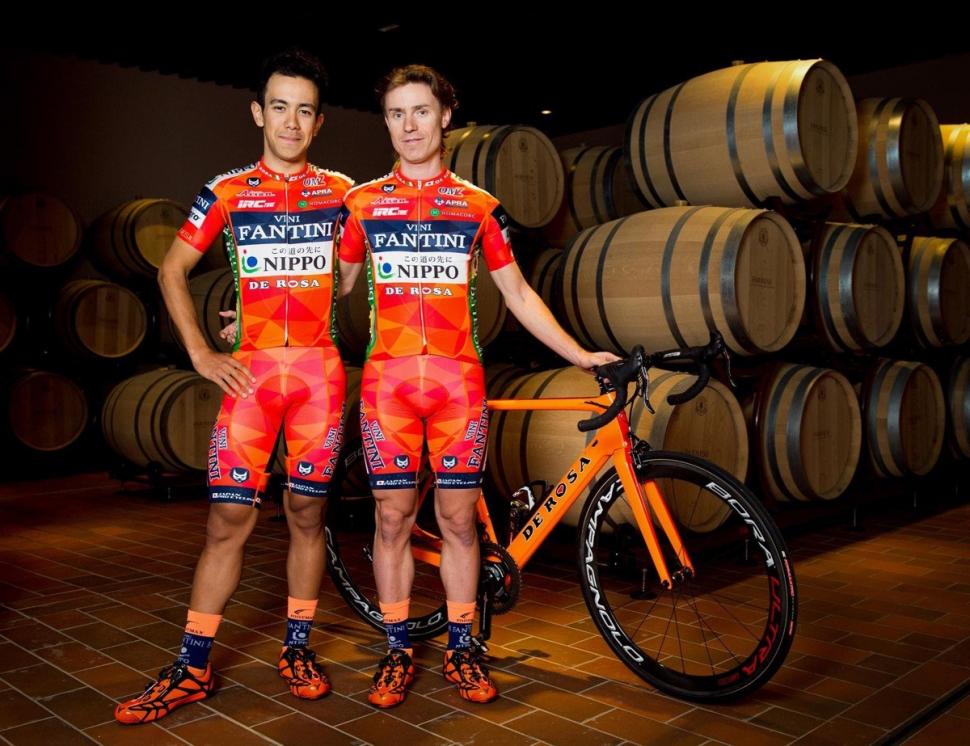 Is there such a thing as too much orange? Yes. Can you have too many triangles on your team kit? No. We’re right behind triangles here at road.cc. That means we’re conflicted over this kit from Pro Continental team Nippo-Vini Fantini.

As far as logo placement goes, “busy” would be the polite way to describe it.

Right, over to you. What do you reckon? Give us your top 3 in the comments below.