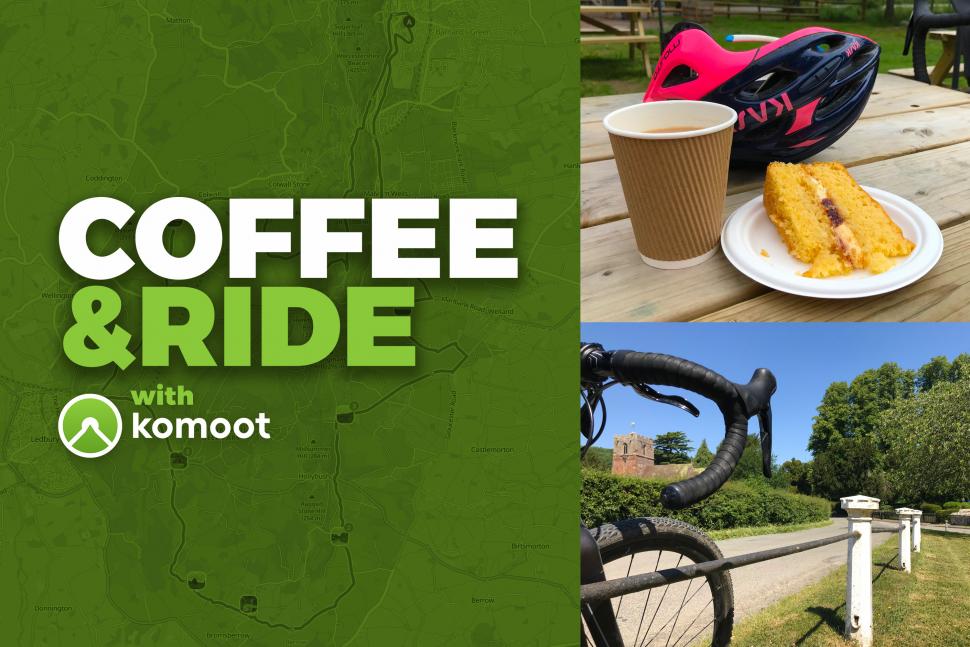 For this month’s Coffee & Ride with komoot, we’re taking a meandering loop around the stunning Malverns
by Lara Dunn

This undulating route takes in some of my favourite quiet lanes around the western Herefordshire side of the hills, before coming back into town on the eastern Worcestershire side. Great Malvern has plenty of cafes in the town, as well as accommodation if you want it. Alternatively, the train station is central and easy to navigate from, and there are plenty of car parks. 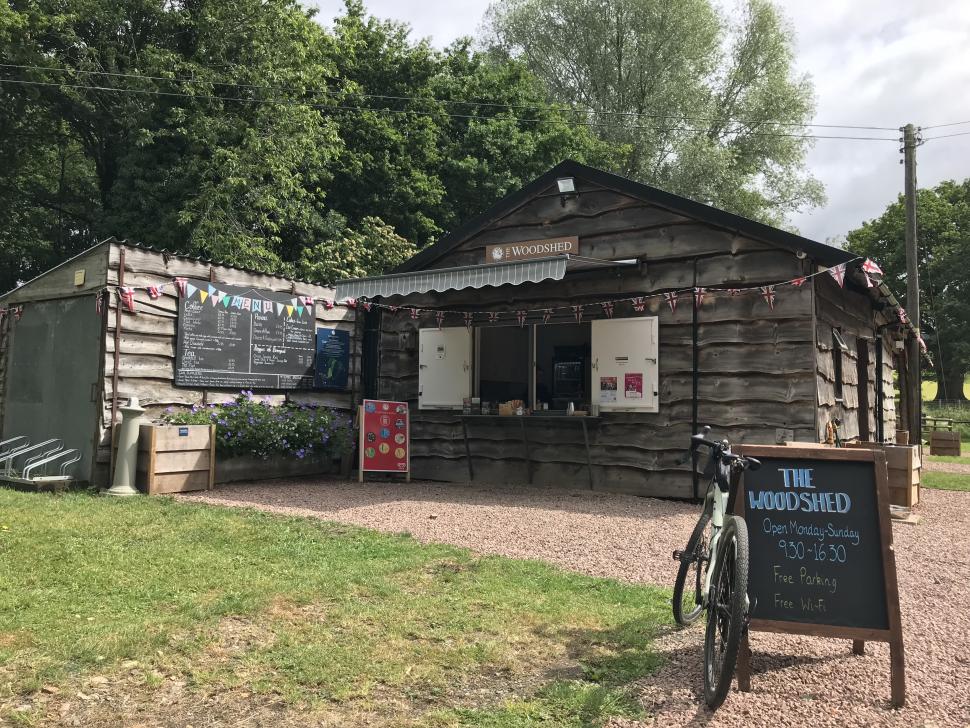 At just under 18km into the ride, almost halfway round and about halfway through the climbing too, the rather new and shiny The Woodshed cafe (cue incessant Divine Comedy earworm for those of a certain vintage) sits at the edge of the village of Eastnor, on the opposite side of the road junction leading to the castle. The main attraction in Eastnor is the impressive castle but the cafe, which opened in 2021, serves the numerous walkers and cyclists enjoying the lovely countryside surrounding the Malvern Hills. 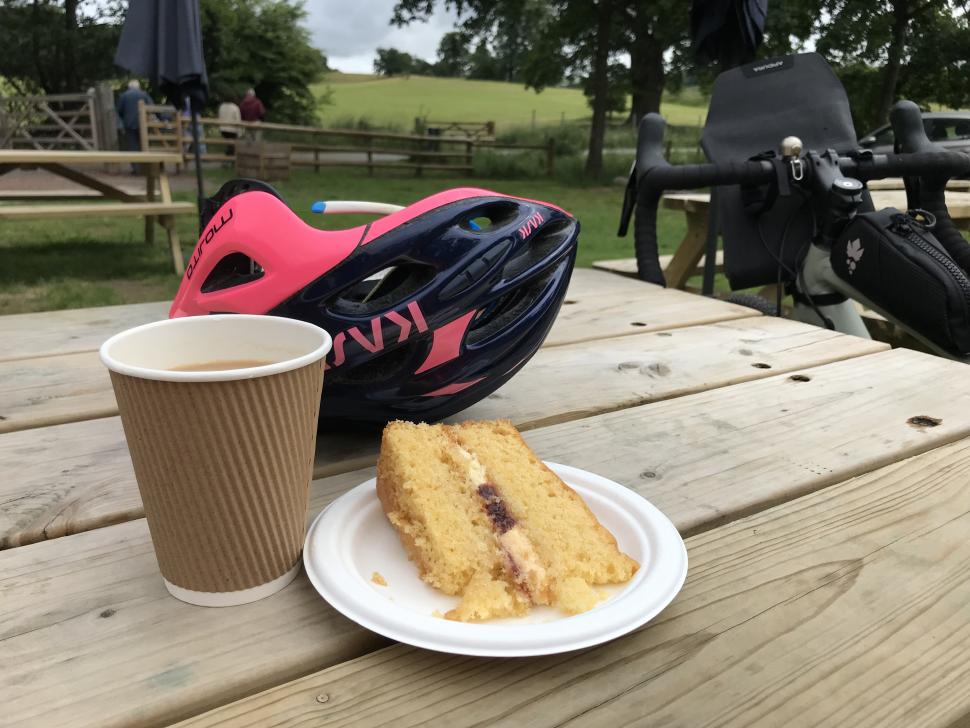 The Woodshed is located right at the entry to Eastnor Deer Park, which played host to the legendary Malvern Classic MTB event for a number of years, but isn’t normally open to cyclists. There’s plenty of seating - both under cover in the 'shed' and out in the fresh air - bike racks, a toilet, bins and even free wifi. Dog-walking friends or family will appreciate the dog shower and poo bins. There’s a decent-sized free car park so, if you wanted, you could easily start/finish the circular route here rather than in Great Malvern as I’ve suggested.

On offer from the café are locally-sourced treats including paninis, samosas, scotch eggs, soups and handmade sausage rolls from nearby Legges of Bromyard. Those with a sweet tooth won’t be disappointed either, with assorted cakes, bakes and ice creams on the menu, including gluten free and vegetarian options. Tea, coffee, hot chocolate and cold drinks are also available. Drinks and food are served in recyclable or compostable packaging, and all waste is sorted for recycling.

Any route starting in Great Malvern is pretty much guaranteed to feature some climbing, and this one is no different. Great Malvern is a pretty Victorian town, famed for its water cure and the iconic 10-mile-long range of hills that dominate the skyline.

I’ve started the route at a handy car park near Priory Park, but you could equally start at the nearby rail station nearby. The initial climb heads quite steeply up through the town centre (with some truly excellent cafes, bars and restaurants) and then eventually on up to the pass through the middle of the hills known as Wyche Cutting. The views out across the Severn Valley, towards the Cotswolds as you climb up to the Cutting make it all worthwhile, honest. That’s the longest climb of the ride done and dusted in the first few miles. Once through the Wyche Cutting, you’re crossing from Worcestershire into Herefordshire, and the countryside on the West (Herefordshire) side of the hills is noticeably lumpier and more pastoral. From this point onwards, the Malvern Hills remain a constant companion on your left-hand side. Heading south, stay high and the route contours along the shoulder of the hills, with extensive views out across the verdant landscape, and a surprising section reminiscent of the French Alps.

An alternative is to drop directly down to the village of Colwall from the Cutting, taking in its popular switchbacks (and an optional stop at the bike-friendly Café Morso in Colwall). From the higher original route, you’ll eventually reach a sharp right hand turn at the bottom of a protracted descent. Look out for one of Malvern’s many wells just around the corner to confirm you’ve got the right turn. 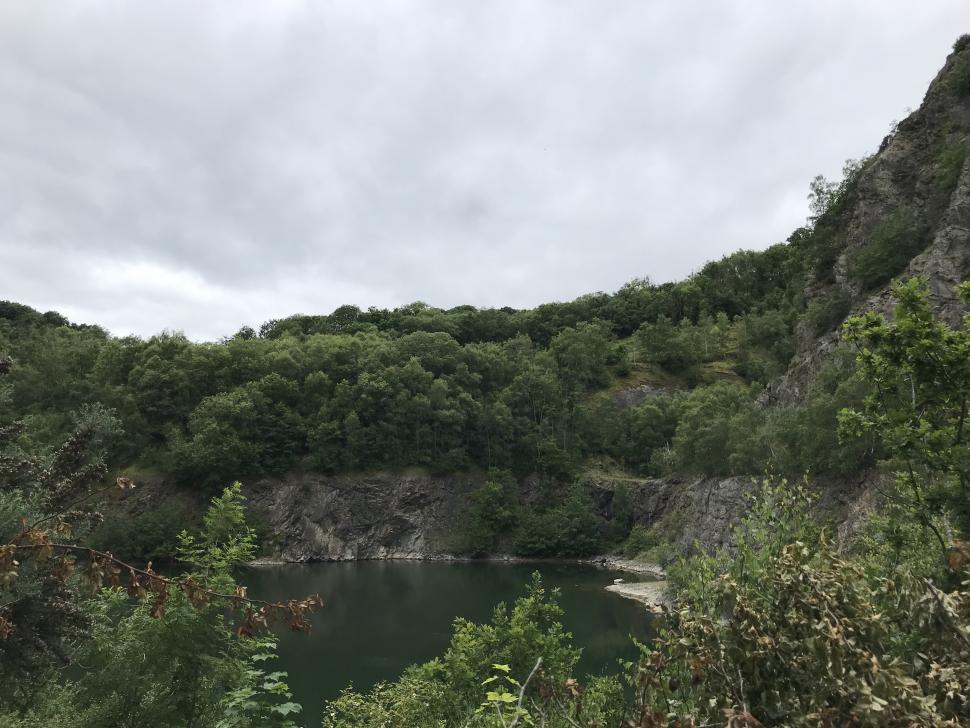 Once past the well onto Evendine Lane, it’s a shady descent to the village of Colwall, where a right turn takes you back onto the main route through the village. After crossing the railway lines, take the first left turn onto Mill Lane. The winding route passes the pretty Norman church of St James the Great, before taking a left hand turn onto a small road that heads roughly towards Ledbury. From here, the length of the ridgeline of the Malverns is a moving panorama on the left, with farmland and orchards stretching out in between.

After a number of ups and downs, the route joins up with a small road at Bradlow, a section of which is charmingly named Cutthroat Lane. Here you’re making roughly towards Eastnor, taking a left turn, followed by a few minutes on the main A438 before once more turning off, this time to the right. The swooping road here undulates right into the village of Eastnor, views of the Malverns on the left, until it’s time for that café stop at The Woodshed. After refreshments, it’s time to cross the main road and head off into the deep Herefordshire countryside, passing the entrance to the Castle and Landrover Experience, and Eastnor’s pretty village green and cricket pitch on the way. A narrow road lined with deep hedgerows and wooded hillsides makes its way down to a ford (there’s a footbridge for those who prefer) and steeply back up again on the other side. This section is all part of the National Byway – Ledbury Loop and features handy brown signs to follow. 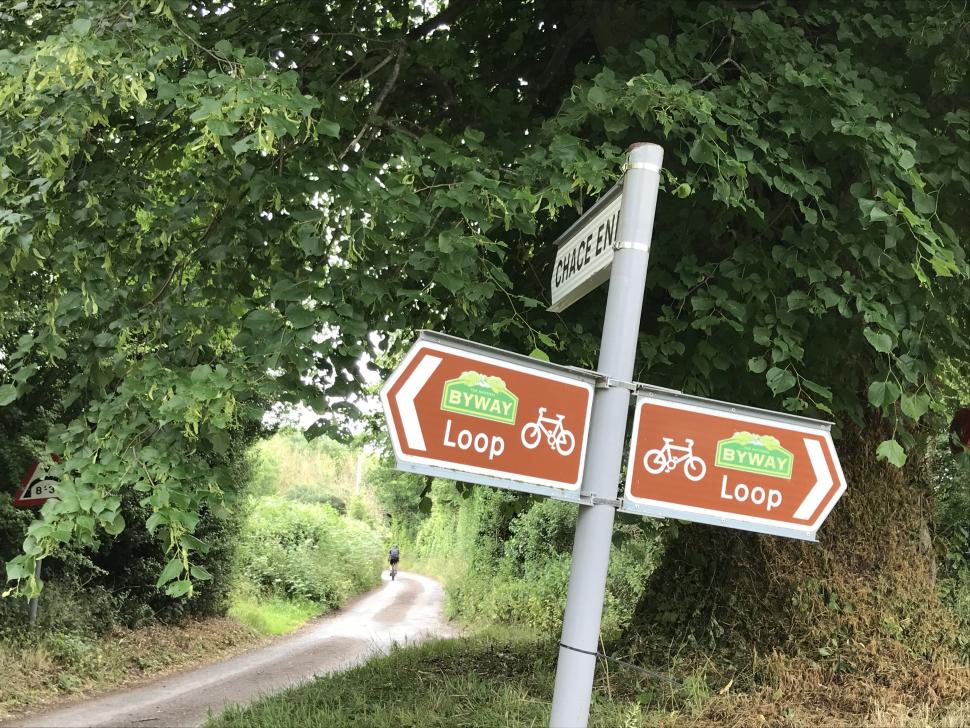 At Chace End, you have a choice – a relatively flat route that follows the Byway Loop or if you’ve the legs for it, the more challenging option of a steep climb through Whiteleaved Oak (gaining that extra 118m with no extra distance). This picturesque village was famous for the 500 year-old tree for which it is named, but that was sadly destroyed by fire in 2020. The two options join up at both ends, making it a good choice for mixed fitness groups. 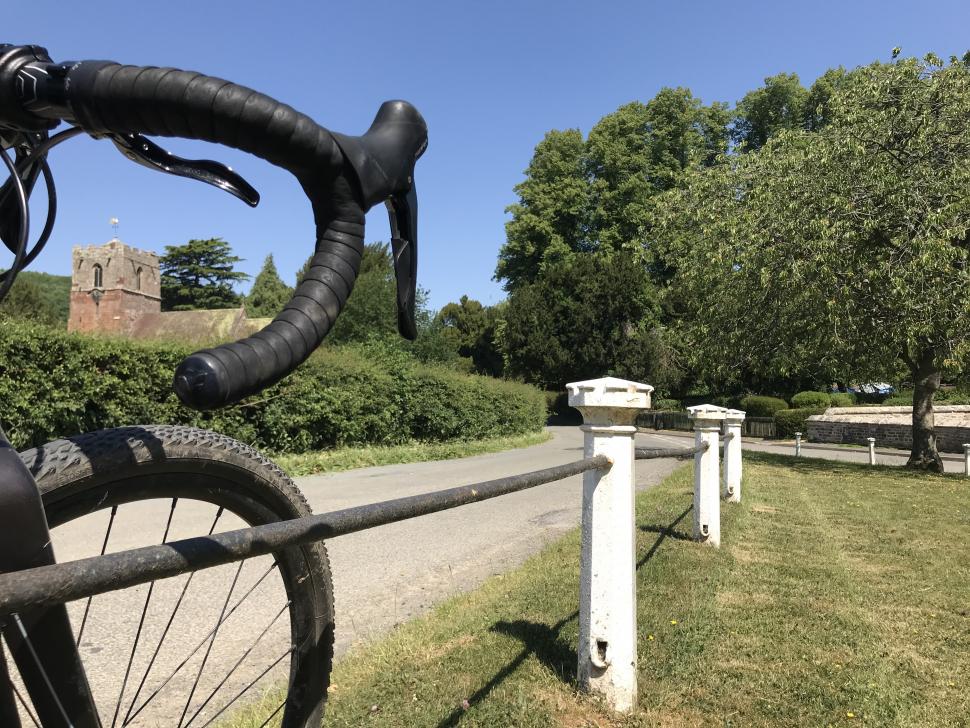 The small road eventually crosses over the main road to Eastnor at Hollybush, before heading over the shoulder of the Malverns back towards the east side. Here there’s an optional detour to the rather lovely Ruffz café near to the lake at Gullet Quarry, with tables in the terraced orchard (open most days from 12pm to 4pm) either via a sneaky short flattish off-road section or a 16% road descent and climb back up.

The steady descent on the road across the common on the other side is fantastic and fast with far-reaching views, but beware the sheep and cattle roaming freely. At the bottom, it’s a short stretch on the main road before the route turns to the left, climbing steadily upwards again. Well, you have got to get back up there somehow! Passing through a stock gate, the route eventually reaches the main road once more. Hill enthusiasts might fancy taking the direct option up past Little Malvern Priory, but a very slightly steadier route goes down a little before heading left and up through the village of Upper Welland, re-joining the main road towards Great Malvern via King’s Road (again, check those views). From here it’s a straightforward buzz along the main Wells Road right into town again, turning off to head back to the car park if that’s where you started.

It's a lumpy route but with plenty of views to take your mind off things, and no shortage of cafe stops along the way and at the start and finish.

Ready to plan your next coffee & ride? Head over to komoot to get started and be sure to follow road.cc for some route-planning inspiration