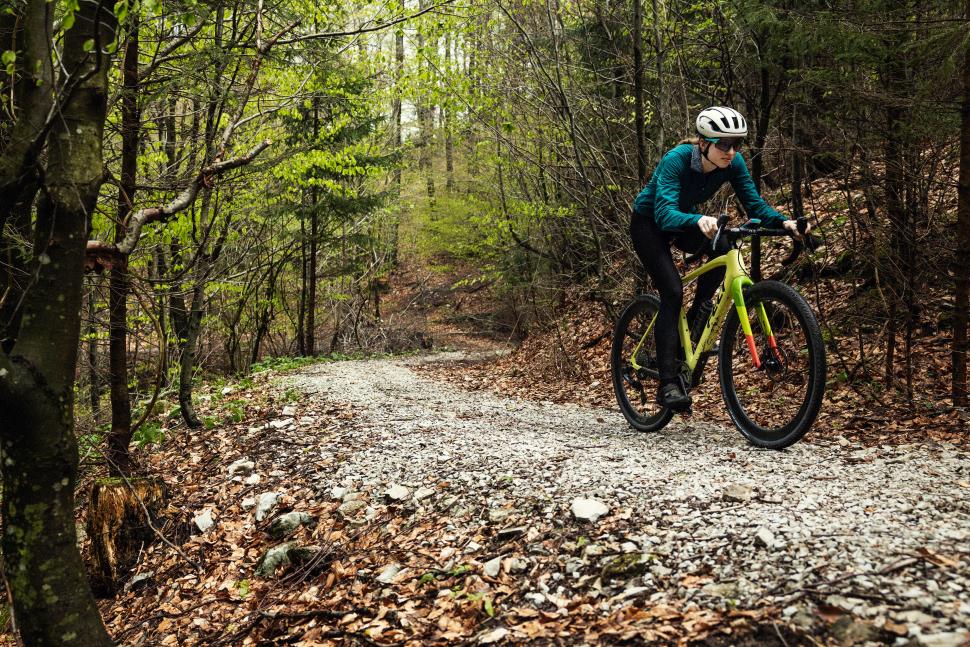 Fast, fun, and with a lot of neat tricks, Felt's first full-carbon gravel bike was worth the wait
by Anna Marie Hughes

Felt has just released its race-focused gravel bike, the Breed Carbon, and we have had a chance to find out how it handles and accelerates on a ride in Austria. 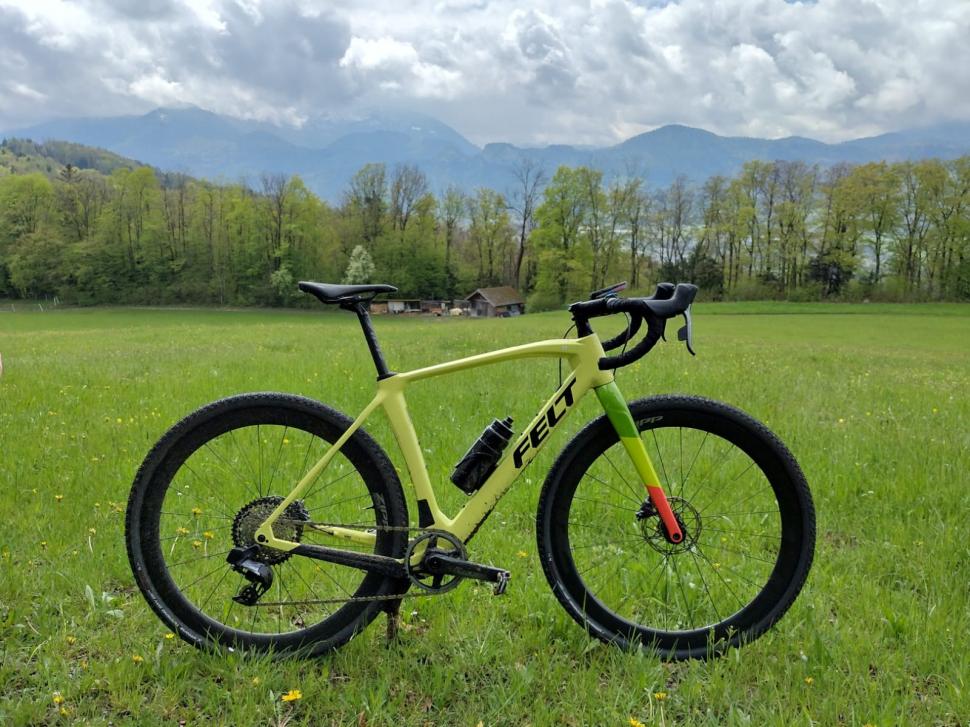 Felt has had an aluminium version of the Breed in its gravel range for some years now but this is the brand's first-ever gravel release with a carbon frameset. It may be a bit late to the party for a v1 but Felt has released a very capable and versatile racer that has a lot of neat touches to cover the needs of those who are looking to blast on any terrain. 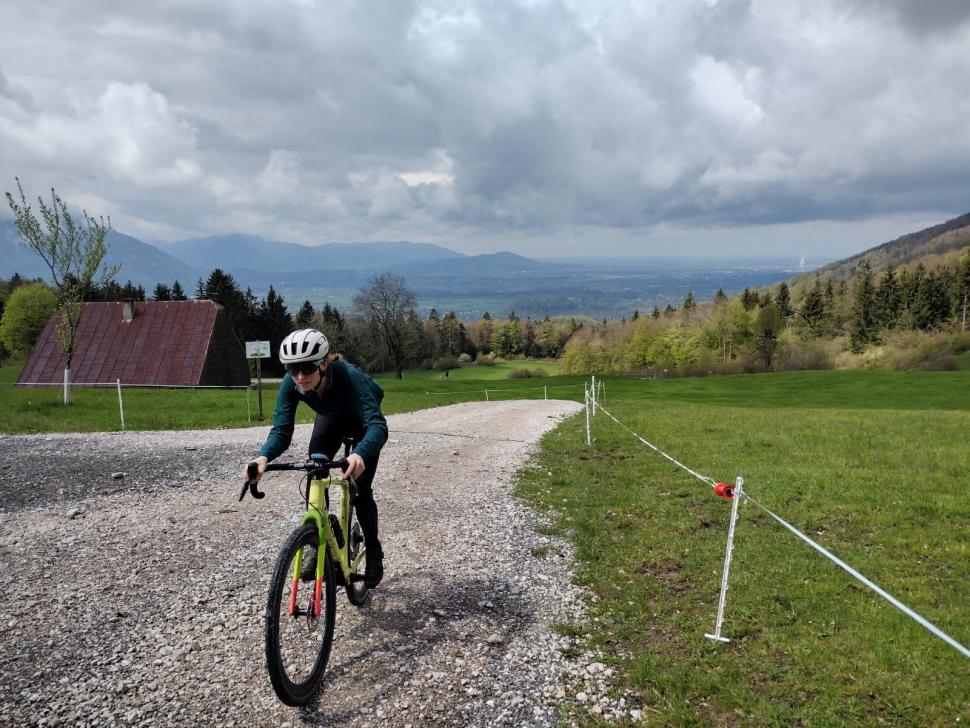 Felt says it has optimised the Blend for speed while also offering clearance for tyres up to 50mm wide. There are a lot of neat touches, such as its versatility with dropper posts and front suspension fork compatibility. The Breed Carbon also has a helpful array of mounting points for fuelling, as that’s also a factor in going fast, of course. 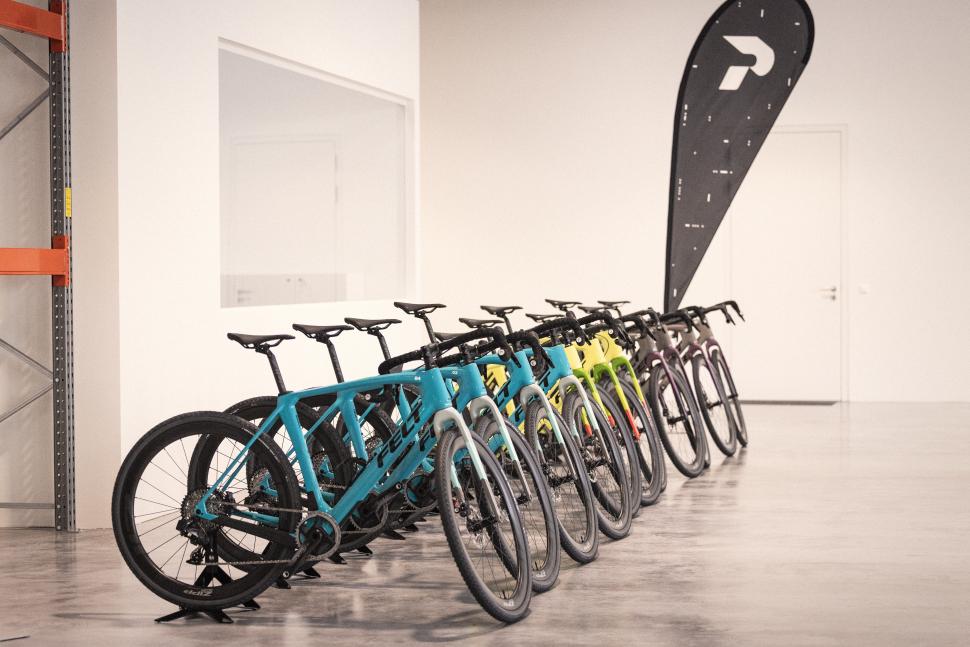 Before taking the bike out and checking out the local gravel offerings south of Salzburg, we had a more in-depth presentation about the bike, getting to see and understand the key features.

What was quite cool is the twist that the brand has done on a T47 threaded bottom bracket. On the non-drive side, the bearings sit internally in the frame, making for a neat, smooth transition from the bottom bracket shell to the crank arms. But on the drive-side, an external bearing cup is used, the reason being that it makes a very handy way of catching the chain, should you drop it.

With internal bearings and a bottom bracket shell that’s closer to the crank arms, it can be quite easy to mash the chain against the frame should it ever come off. It’s not pleasant. I didn’t get to test this feature on the ride today because the chain stayed on throughout, but it was there if needed.

Another interesting touch is the seatpost clamp, which has the grub screw threading into a replaceable insert – so if you mash the threads, it’s just a small cheap part to replace, rather than messing up the frame.

The next question was whether the same was the case for the thru-axles, as some brands have replaceable dropouts here, but Felt says that the threaded aluminium inserts for the dropouts are bonded into the carbon, so if you cross-thread these, you do risk serious damage.

The planned loop was just south of Salzburg, in the foothills of the Austrian Alps and around the valley of the river Salzach which cuts through the city. It offered a lot of variety in just 30km, from wide, flat open paths along the banks (gravel that some might refer to as ‘prime’), to brutally steep climbs and flowing descents. It was mostly double track, but diving off the main trails and into the woods periodically, there was a good amount of twisty singletrack of varying gradients to get stuck into. 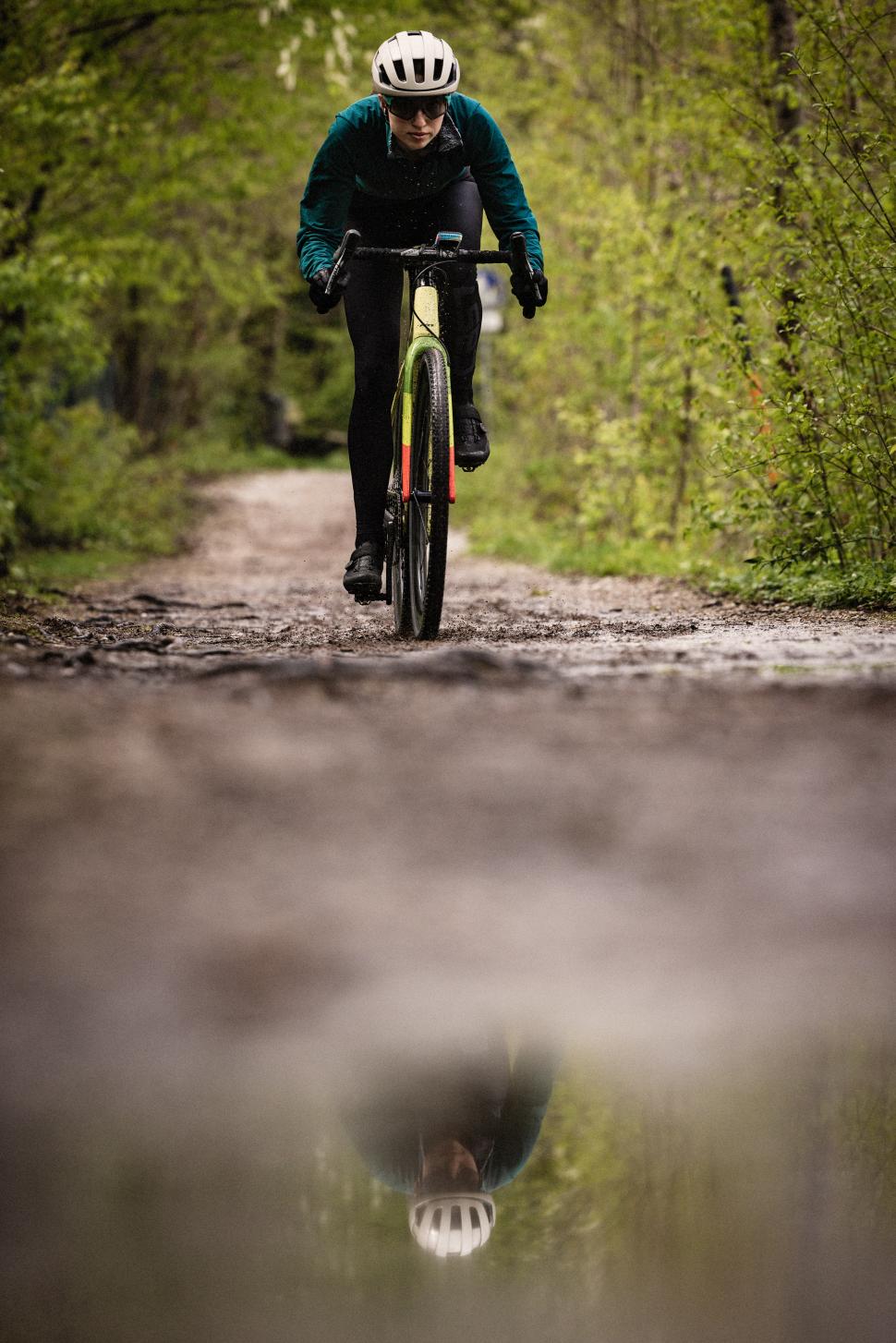 The Breed Carbon was plenty stiff. Felt aren’t in the game of making a super lightweight gravel bike like Specialized has with the Crux and so it may mean they take a hit in the spreadsheet wars, but they say they'd rather make something that’s solid and will prove durable. It meant that sprinting up to speed felt efficient after the slow 90 degree turns off the bridges as we crisscrossed the river. 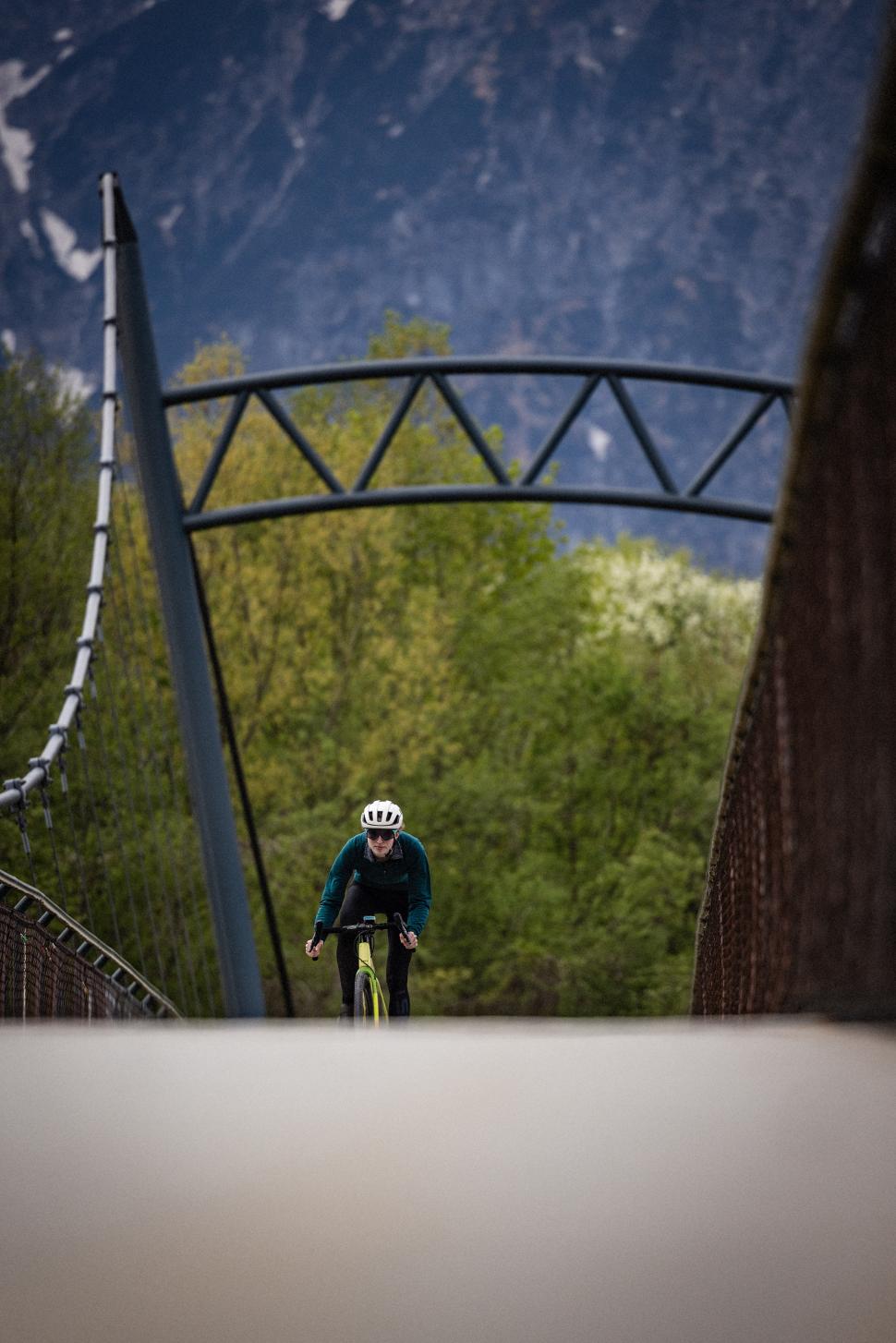 Part of that is likely down to the build. SRAM’s second-tier Force might not be the lightest groupset out there but it does save weight over some alternatives. The Zipp 303s wheels are also a pretty lightweight option - although not as light as some other gravel wheels - and these were shod with Vittoria tyres with minimal tread, so the spec was geared towards faster riding. 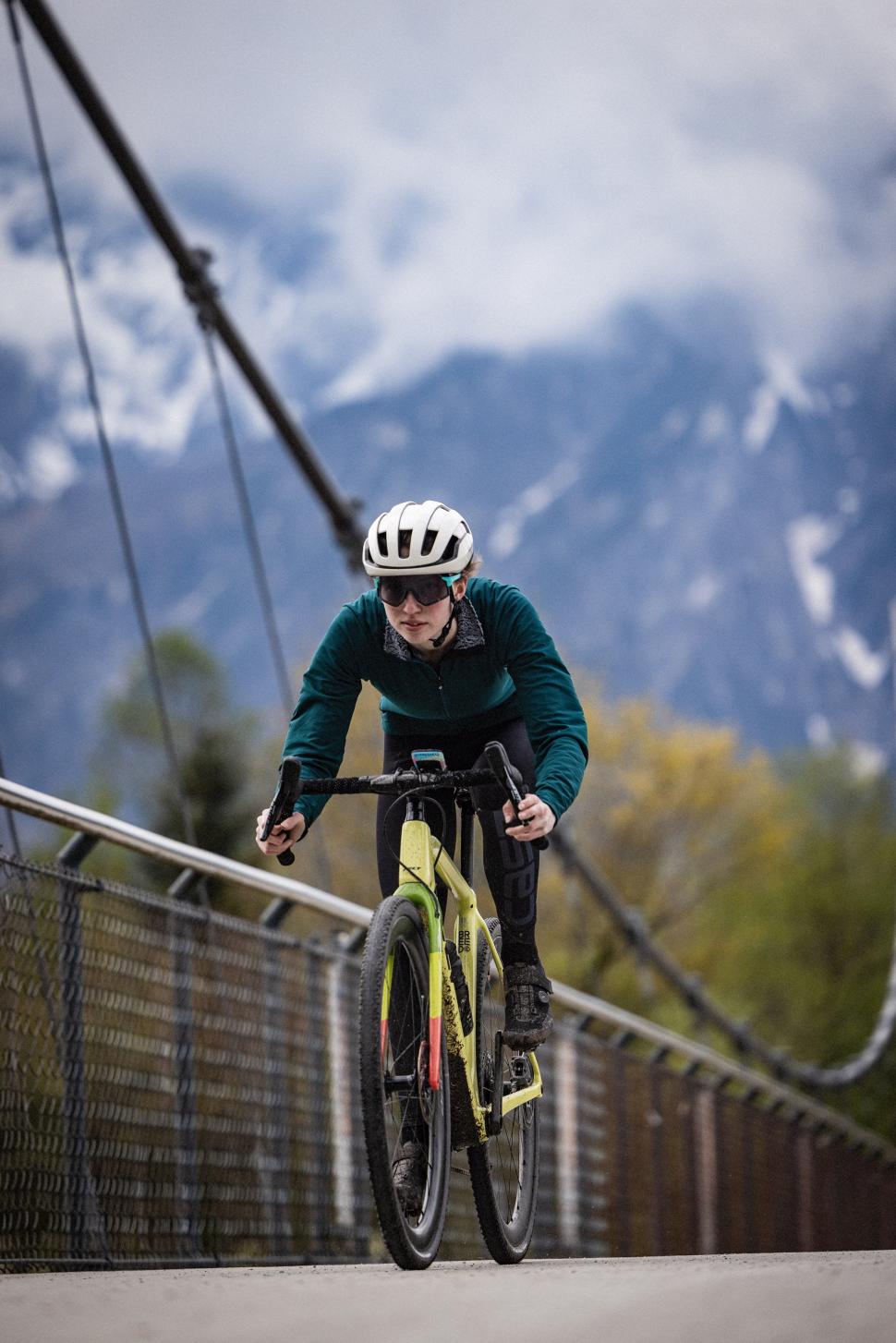 As we began to climb, first on tarmac access roads used by the owners of the beautiful houses nestled in the hillside, the bike still felt pleasingly responsive. The primary benefits of a slack head angle and longer front-centre relate to the descending, but a secondary benefit is that there was no toe-overlap with the front wheel - making tighter turns at slow speed as easy to execute as they really should be.

How to read a bike geometry table: the numbers made easy

It’s worth mentioning, though, that the tyres I was riding were 38mms (measuring more like 40mm wide on the rims due to the wide internal width) - if you went up to the full 2.0 inches (50mm) that the frame/fork will take then perhaps the tyre would hit your feet. Or perhaps not. All I can say for sure is that this set-up worked well for me in that regard.

Continuing to climb, the trail steadily transitioned into finer, shingle and then into damp and earthy forest paths. Here the bike felt a little compromised by the choice of tyres. It would have been better making the most of the bike’s 50mm clearances and the ability to run lower pressures for greater deflection over the roots and rocks sunk into the paths. Also, taller treads were very much needed for adequate traction. 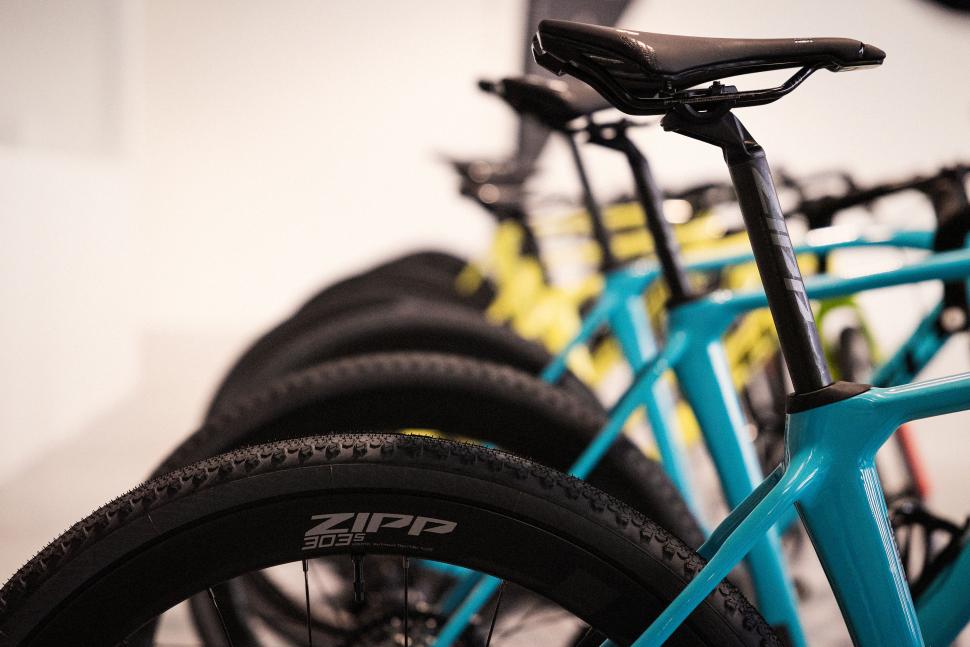 Due to this, I didn’t get so clear a picture of how the bike really handles the off-road climbs but the same qualities the Breed Carbon showed on the tarmac sections shone through for the most part. It won’t be until we have one sent over for a full review and we can swap out the tyres for a set better suited to that type of terrain that we’ll be able to get a full idea of its technical climbing performance.

It was a similar story for the descending. We took in a mix of tarmac roads, double track and singletrack excursions. On the tarmac, the bike felt super confident in its handling and grip, allowing me to take corners at speed.

That largely shone through too on the double and single track but, again, it was hard to really rail the corners with the semi-slick Vittoria tyres and on the rougher stuff I was cautious of bottoming out the rims on square-edged hits.

Although it would have been great to make the most of the terrain, it was really the best balance it could be. No tyre choice will please everyone and be suitable for all surfaces, and Felt are selling the bike with those Vittoria tyres as they think it’s the best match for the terrain most people will have access to.

But to ride more rolling and relatively smooth trails would have shown only a part of what the Breed Carbon is designed for, so it was great to be in the hills and taking all that in, and it did make sense that we’d be riding the stock spec rather than using a different set of tyres. 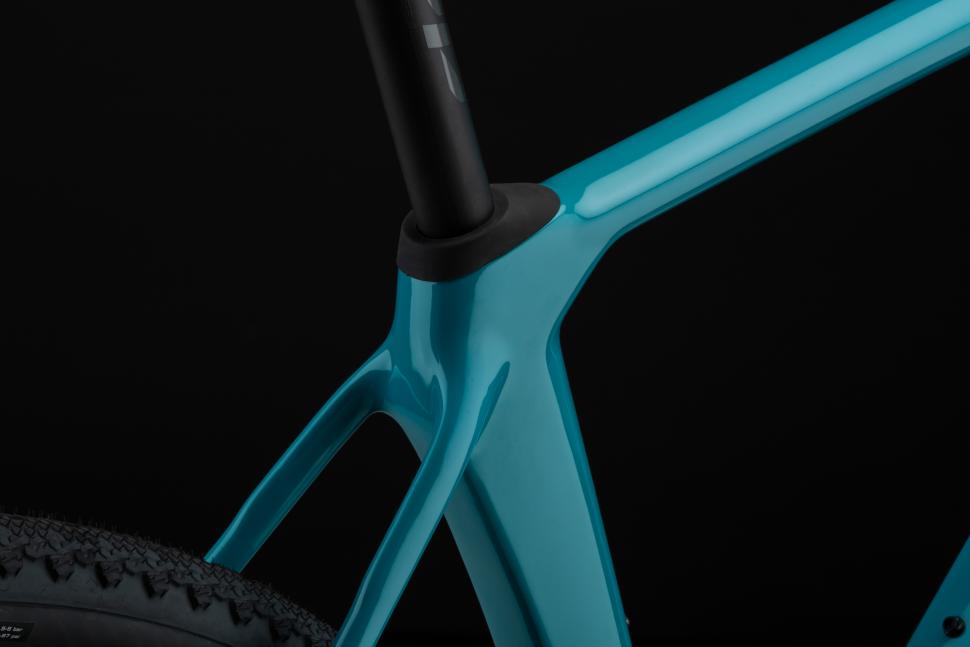 In terms of the extra touches, the vibration damping sleeve for the seatpost was pretty good. I certainly drove the pace over some rockier rough stuff and found it wasn't quite so jarring - the ride wasn't a particularly long gravel one but it is still reassuring that I didn't start experiencing any saddle discomfort.

Pressing at the rear of the saddle with just your hand, you could see it flexing. Interestingly, though, the saddle didn't move to the degree of the Cervelo R5 all-rounder performance road bike I’ve recently been riding, and it required more force. Still, you get a lot more flex than on a bike with just dropped seat stays and a lowered clamp.

As we were riding along I heard a loud clunk. Stone hitting carbon is not a pleasant sound and it's something that can happen a lot on gravel rides. To help the Breed Carbon better take on the terrain, Felt has positioned moulded rubber protectors along the underside of the down tube and bottom bracket, as well as along the drive-side chainstay. While I did still hear the occasional hollow ping from gravel strikes on other parts of the frame, it was reassuring to know that the protector is quietly fending off a proportion. 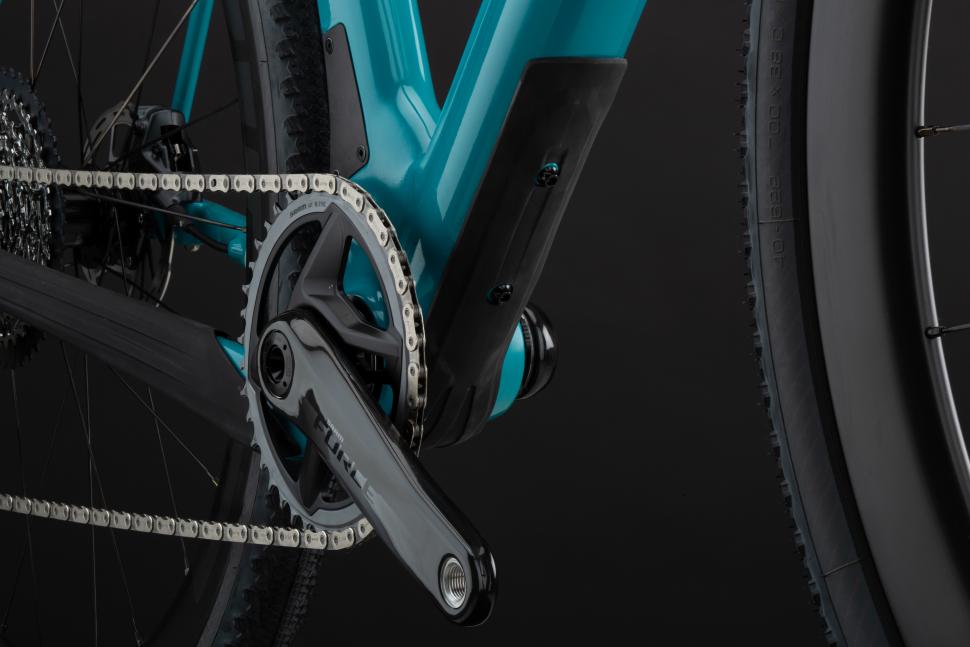 It's obvious that Felt has paid particular attention to the details, and the bike looked very neat. As it was set up 1x, there was a sleek blanking plate in the place of the front derailleur hanger.

So there you have our first thoughts on the Felt Breed Carbon. It's capable and versatile and certainly encourages you to drive out the corners and hammer the straights.

We'll be getting the bike in for a full review soon so keep an eye out for that on road.cc.