Whether you're riding a sportive, on a club run or just out with a bunch of friends, here's how to communicate in a group to keep everyone safe
by Mat Brett

When you're cycling in a group you can't always see the road ahead as clearly as you would when riding alone so clear communication is essential for keeping everyone safe and moving efficiently, and that means learning a few simple hand signals and calls.

Signals and calls might be confusing at first but they become second nature in no time. When it's you who's passing on the information, just make sure that you're as clear as possible.

Bear in mind that many signals are not universal – they vary regionally and between individual groups – so make sure you pay particular attention on the first couple of rides with a new bunch of people.

If you're ever in any doubt about whether to call back as well as making a hand signal, do it anyway; you're better off giving riders behind an unnecessary shout than running the risk of an accident.

When the group needs to stop at a traffic light or when someone has a puncture, for example, raise your hand straight up. 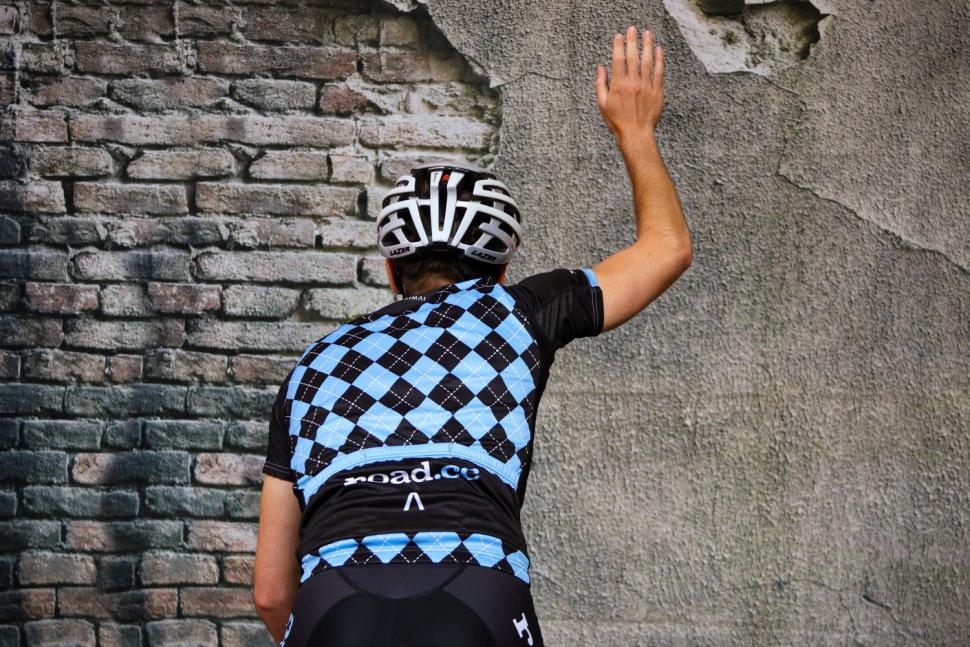 Some people use a closed fist behind the back to indicate stopping, but that's appropriate only for smaller groups because its visible just to riders immediately behind you.

Other people use an arm out to the side with a flat palm facing backwards.

Calling out "Stopping" is usually a good idea, especially if it's unexpected, because you might need both hands on the brakes.

[And yes, Liam in our pictures does need to stop quickly before he hits that wall]. 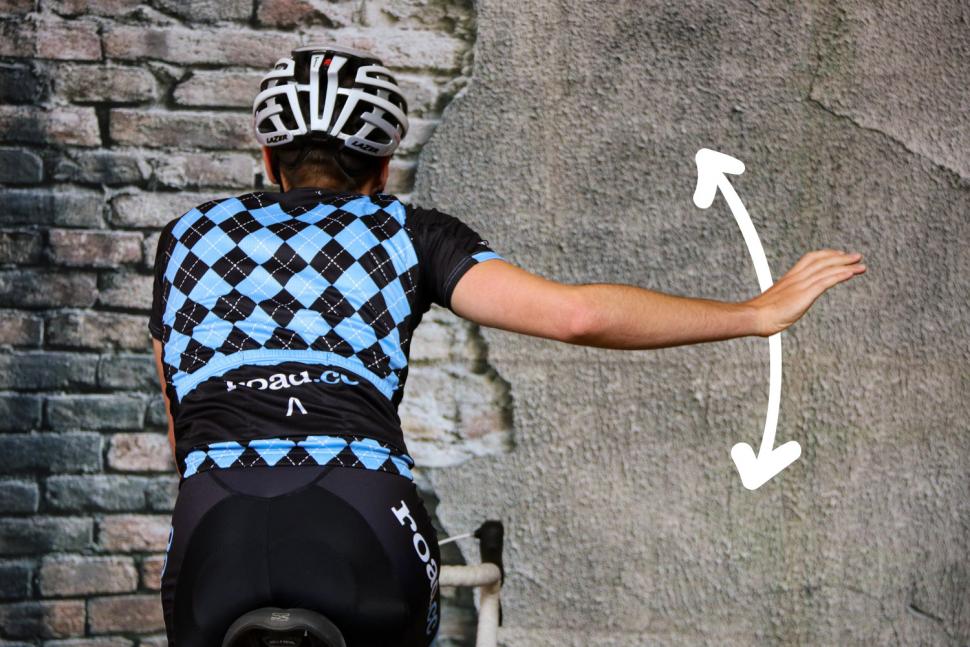 You might need to slow when approaching a tight bend, for instance, or if someone in the group is struggling with the pace. Put your arm out to the side and move it slowly up and down.

Calling out "Slowing" is often appropriate.

Obstruction in the road 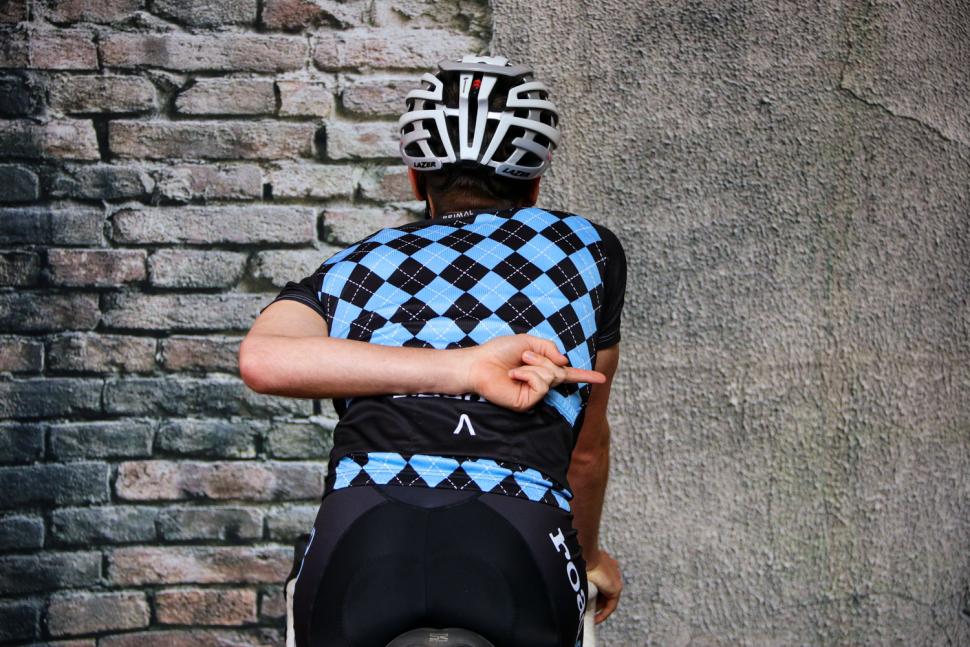 If there's an obstruction that requires riders to alter their road position, such as a pedestrian or a parked car, point behind your back in the direction you need to move using the arm that's on the side of the hazard. In countries like the UK where we drive/ride on the left, you'll usually need to move out to the right, but you'll occasionally need to tell riders in a group to move further left. 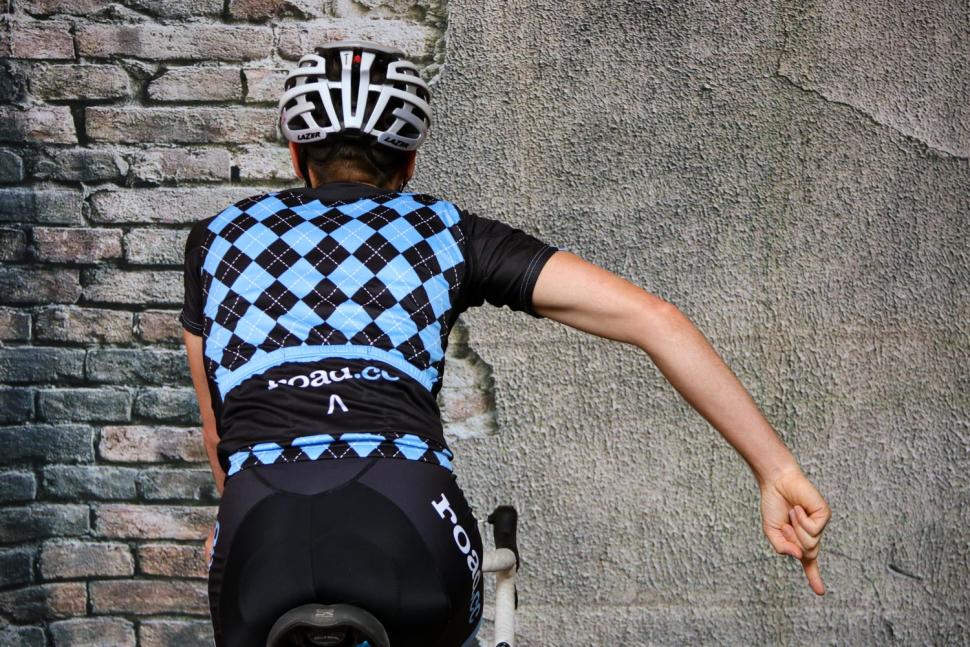 Point out potential hazards on the road surface such as potholes and drain covers that need to be avoided. Your hand must be visible to riders behind, of course, so make sure you position your arm out to the side rather than in front of you.

Shout out "Hole" – or whatever other type of hazard is coming up. 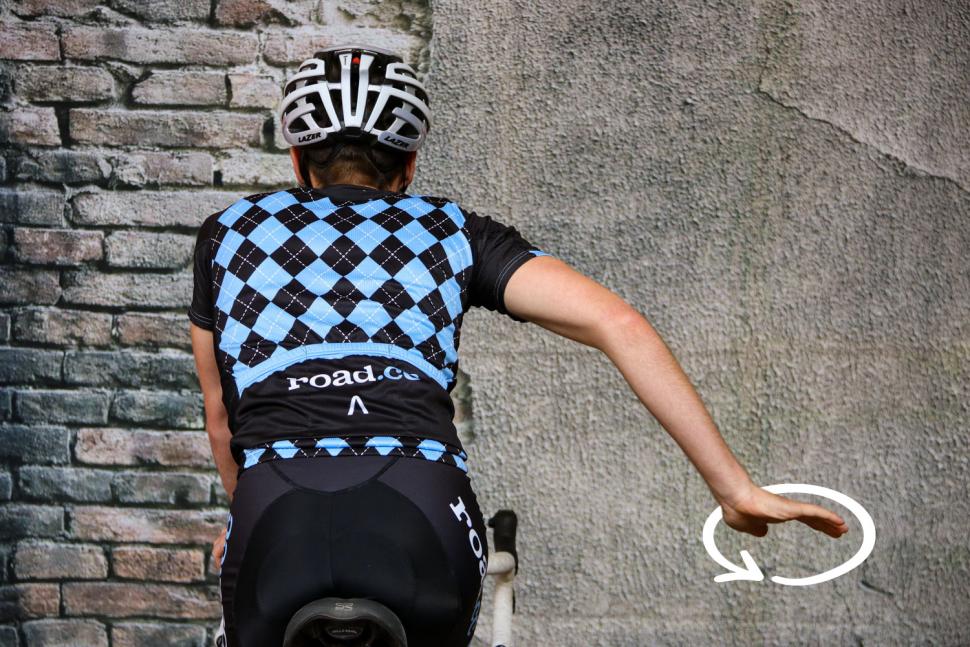 If there's a patch of gravel (or something similar) that could be loose and treacherous, put your arm out and wave your palm towards the road surface.

Give a "Gravel" shout to avoid any doubt. 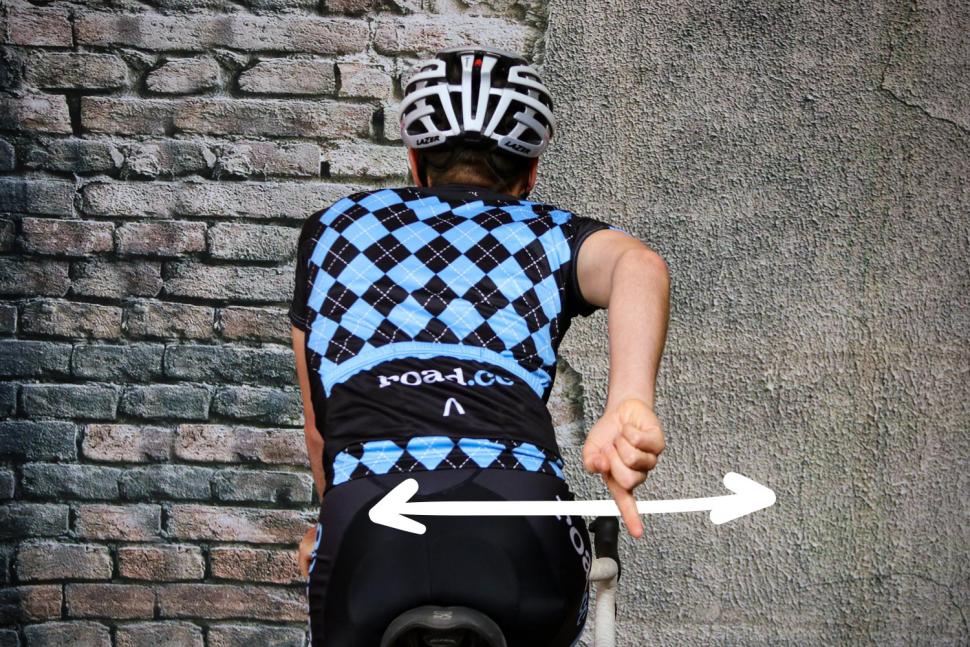 Warn riders behind of features that run across the road ahead by pointing down at the surface and waving your hand laterally. Some people do this with their arm out to the side, others with their arm behind their back.

Shout out the type of hazard you're about to encounter; riders behind definitely need to know there's a cattle grid coming up, for instance, especially in wet conditions. 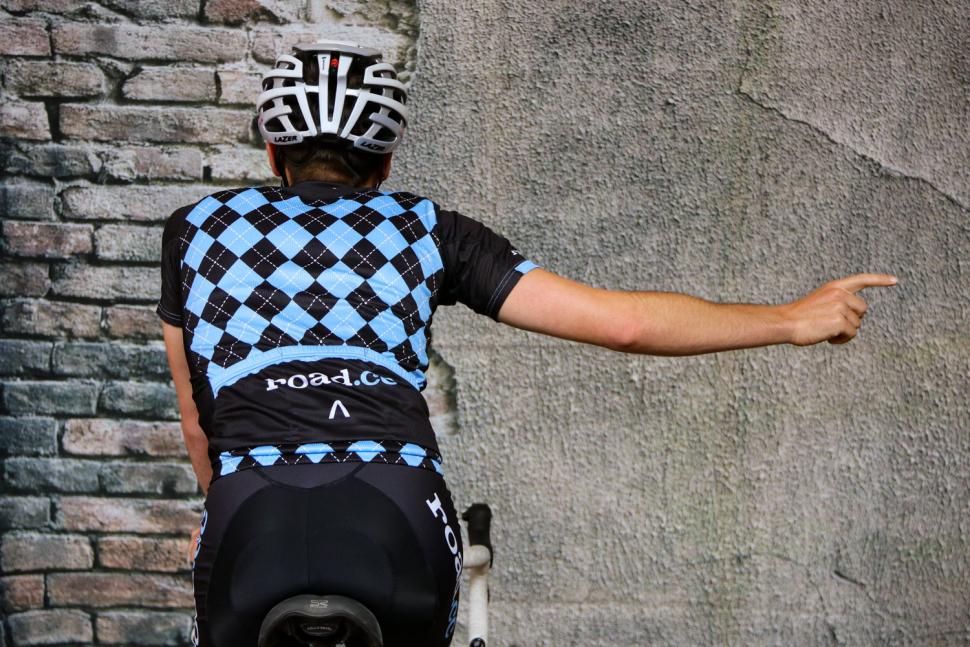 When you're approaching a turn, stick your arm out at shoulder height to indicate the change in direction.

A "Turning" shout is often useful, particularly in a large group. 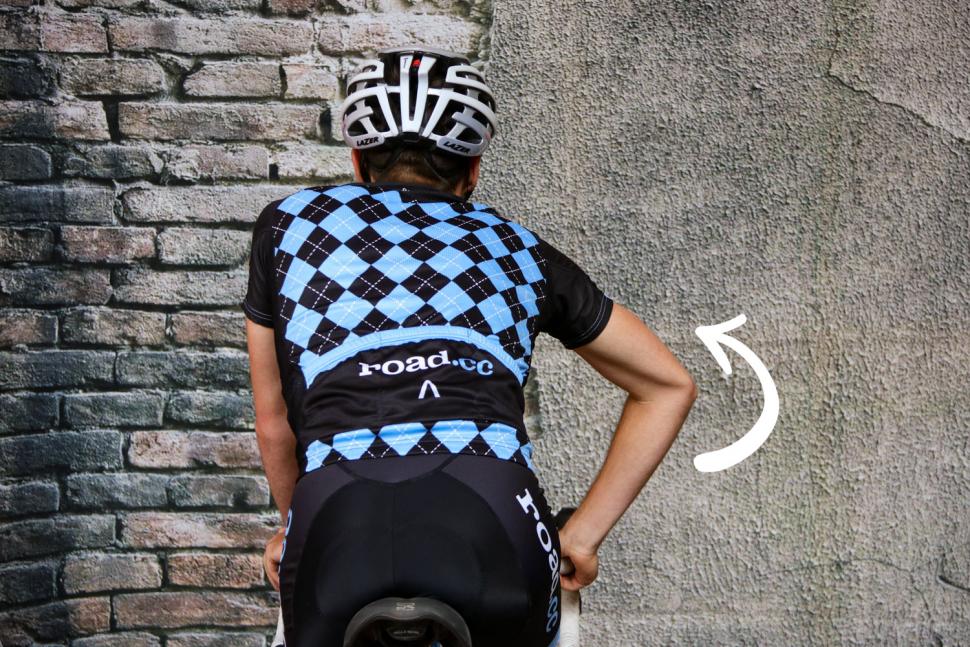 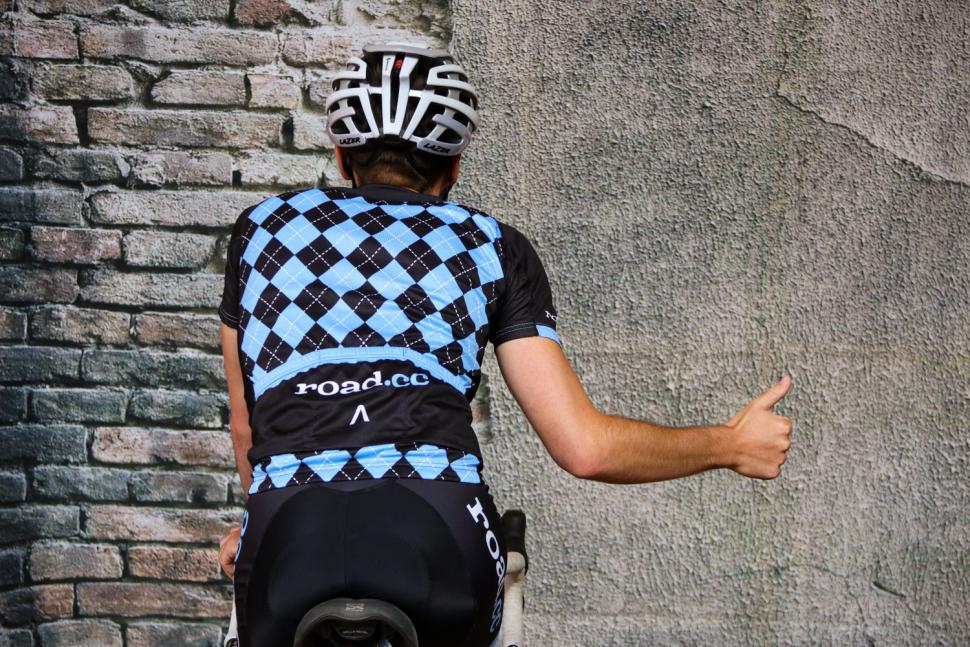 A quick thumbs up says "thanks" when a rider moves over to give you a bit more space, for example, or if another road user waits patiently for the group to pass where the road narrows.

And yes, there are plenty of less friendly hand gestures for other road users too. We don't need to go into those here! 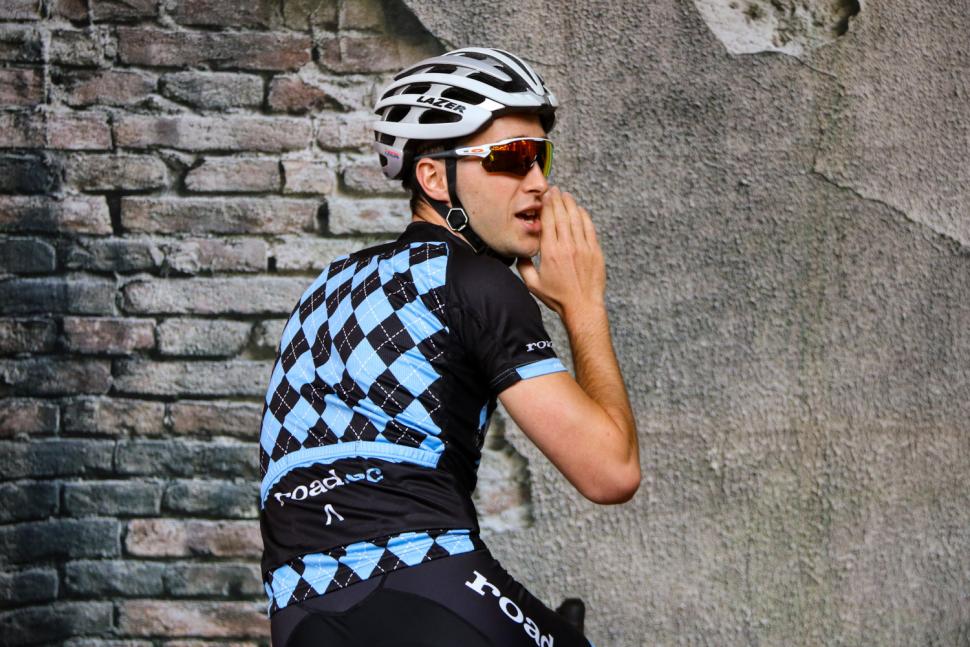 Always consider calling back to other riders in the group to reinforce your hand signals. Sometimes it's not necessary, particularly in smaller groups, so use your judgement here.

There are a few other common calls that don't have accompanying hand movements:

Car up A car is approaching from behind.

Car down A car is approaching from ahead.

Car back Another way of saying that a car is approaching from behind.

Single out or single file Arrange yourselves one behind another.

Clear left/right At a junction, the road to the left/right is free of traffic.

If you use any other hand signals (not that type!) or calls, let us know about them in the comments.