Your perfect commute! Making the most of the working day

What's the best way to get maximum enjoyment out of your commuting time? Our Liam thinks it's with an e-bike!
by Liam Cahill

Ribble has asked us to have a think about our perfect commute, so here we go. With all of the queues at petrol stations, we're certainly not going to be jumping in the car for this, so first, we’re going to need a bike for the job and we're in no two minds about what we're picking.

For us, an e-bike is the logical choice. It’ll help us get to work efficiently and without getting too sweaty. In traffic, they are great because it’s easy to get up to speed away from lights, keep that speed on the hills for very little effort and then they can also help you to keep up with cars which is handy when traffic gets heavier. 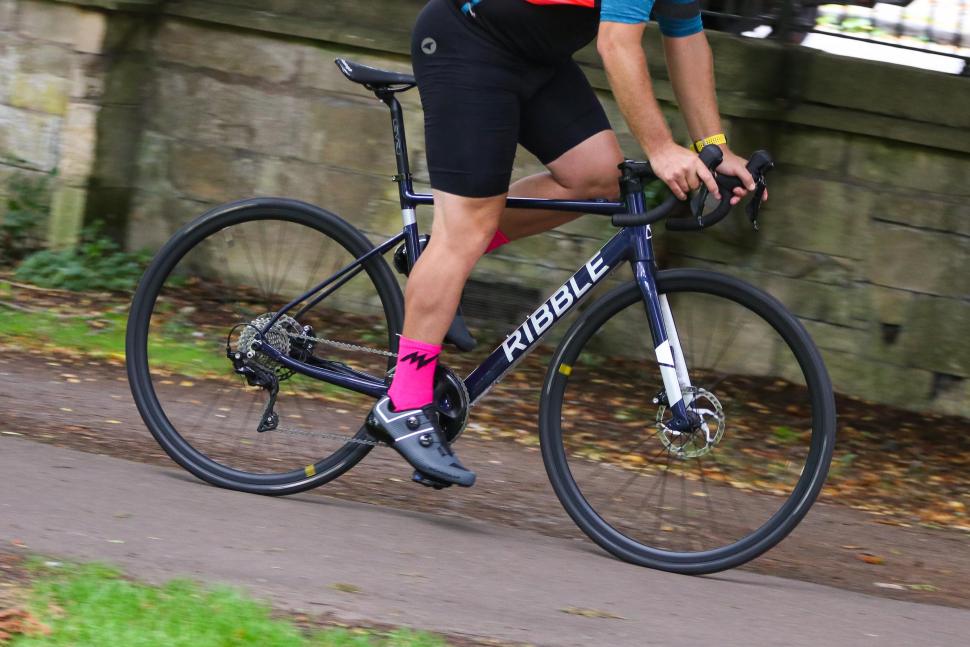 But the ride to work is only half of the story. The commute is going to be the only chance we get to head out on the bike during the week, and we want something that can be used to head into the lanes and blast up some hills for 45 minutes.

So for this dream commute, we’ve got Ribble’s Endurance AL e. It is an e-road bike that uses a eBikeMotion X35 hub motor, providing 250W of pedal assistance which, given the bike’s low weight, means that the ride is pretty punchy.

We wouldn’t say that this looks much like an e-bike from first glance. It uses the same design as the normal Endurance AL, so you get the looks of a traditional road bike, it is still a great all-around workhorse of a bike. You just get the added assistance of the hub motor with the battery hidden in the downtube.

It is also from the same stable as the Endurance SL e which was the eBikeTips bike of the year. It’s really not bad at all.

eBikeTips e-Road Bike of the Year

In terms of making this right for us, an absolute must when we’re buying a bike for commuting duties is mudguards. We're looking for silent reliability and they need to provide protection throughout the year because the rain has a habit of falling on any given Tuesday in this country. As a result, long guards are what we're having and Ribble does a set specifically for the Endurance bike. We'd get the mudguards at the same time as you buy the bike. It really is a sensible add on. 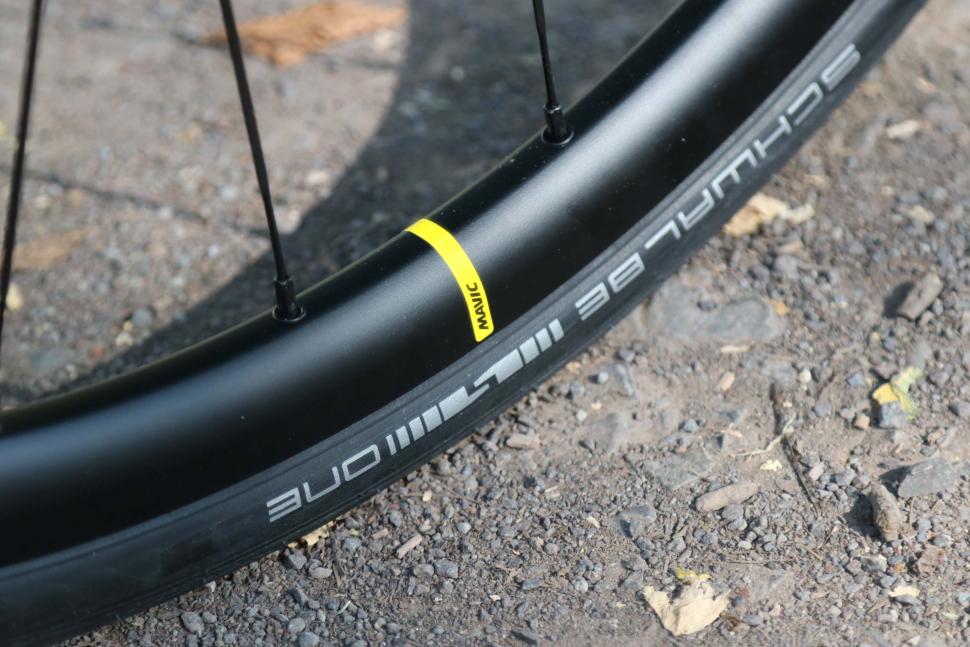 Tyre choice is another important consideration. Tubeless might just help you to avoid a puncture when you’re heading into the office for an important meeting, but an even more important consideration in my mind is tyre width. As standard, the bike comes with 28mm rubber and we’d say that is ideal for the mix of commuting and general riding that we're intending to use this for. If your intentions are even more commuter-based than ours, then a set of 30s would be a sensible change.

The first part of this commute is pretty simple. We want to get to work efficiently, using as little effort as possible. That’s going to mean using some bigger roads and, annoyingly, riding in the rush hour traffic. This is one place where the e-bike comes into its own. There are loads of traffic lights and pedestrian crossings on the route so we’ll probably be coming to a stop quite a few times. That constant slowing down and speeding up can be really draining, so having the helping hand from the motor makes a huge difference, especially over the course of a week as the miles rack up. 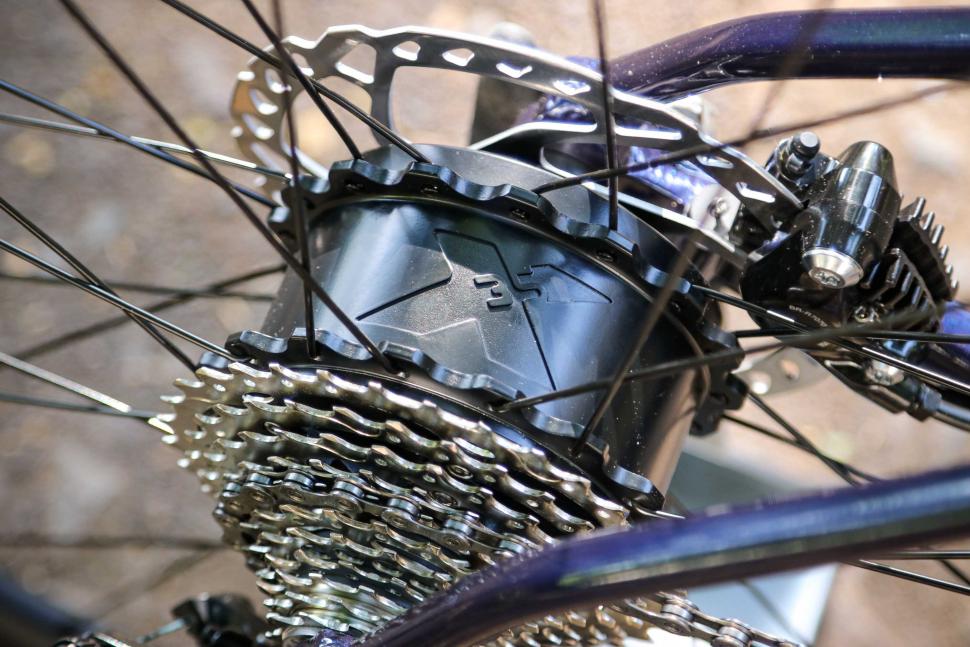 Hills are annoying when you’re just wanting to get to work. Often, there is one hill on your route that will fill you with dread in the morning and that just isn’t the best way to start the day. Having the motor to assist you means that you can kick back a little bit to save yourself from getting all sweaty, or just as easily keep your speed up if you've overslept a bit.

Then there is a safety factor to consider. Traffic rarely moves at anything more than we can manage around here in the morning and it is nice to be able to match the speed of vehicles when in the centre of town. Once they inevitably start to slow for a junction, we can easily filter past the stationary traffic.

While you might be a bit peeved by having to mix it with the cars, at least you're not as restricted as you would be in a car. Using a bike to get to work is great for a number of reasons. You can get closer to the office on the bike and it isn’t going to cost you anything to park when you get there.

Two wheels also bring the ability to use the growing network of infrastructure that is popping up in cities. It certainly isn’t Amsterdam here, but Bath has some decent car-free stuff that we can use to piece together a route. That can also mean tarmac-free around here, so all the more reason for wide tyres and mudguards.

After a long day of work is done, it’s time to head home. We’re not going the same way though. No, this is, if we've been working in the office, the only chance to get out on the bike for a nice spin, so we’re going to point the front wheel in the direction of the lanes, get away from the rush hour traffic and get a nice little workout in.

Once away from the traffic, we've got about 30 minutes for riding around the lanes, so we’ll probably stay quite close to the outskirts for this ride and that means that we’re going climbing.

Some of the lanes around here are savagely steep. Gradients regularly get over 20% and the surfaces are far from perfect - that’s often the trade-off for getting away from the cars - so if you don’t particularly like steep hills then an ebike can help to level them out a bit. It isn’t cheating at all, it’s just making your ride more enjoyable.

For us? Well, we can do these climbs on an acoustic bike, but we’d be pedalling squares in the lowest gear and it’d take ages. The e-bike allows you to tick off more climbs at a faster pace. This ebikemotion system not only lets you choose your assistance level but also customise the bike’s assistance on the smartphone app so it’s exactly how you want it.

Once you’re on the steepest part of the climb, the torque that the motor provides is the really key thing. The eBikeMotion X35 system doesn’t produce the biggest torque reading on the market, but given that it isn’t a bike that is going to be carrying silly amounts of weight like a cargo bike, the 40Nm that we have here is just right for what we’re doing here, which is namely riding up silly hills and accelerating away from traffic lights.

You might be sitting at home thinking - pfft, that e-bike is no use for getting fit, it makes things too easy! But because e-bikes offer pedal assistance and do so with different modes offering different levels of assistance, you can still get your heart rate to its max and get that lovely taste of blood in your mouth as you push over your limit if you want to. Or you can sit back on the motor and have a pleasant pootle.

Aside from the motor, this bike’s other practical features are a benefit out here in the lanes. The nice wide tyres are more comfortable over the broken surfaces you’ll often find, and the wider contact patch is great for providing grip. Rainwater and surface run-off from the fields can coat the tarmac in gravel and debris, and that means punctures. Tubeless tyres cope with flint and thorns much better. We'll run these tyres at a pretty low pressure too.

And then we turn to the hero of the year-round bike, the mudguards. If it rains, or in the winter when the roads are just constantly wet, that mix of silt and cow is not really what you want to be flicking all over your bike, back and face. Ok, so the bike is still going to get a bit dirty, but we find the weekly clean much easier to do when mudguards have been attached.

With time for riding quickly coming to an end, it's time to head for home. We’re losing the light now as we head away from summer with heavy hearts so we're big fans of having plenty of space on the bar and seatpost to mount lights. As we'll be doing these rides throughout the winter, we want a properly strong set of lights, at least a thousand lumens up front and then a nice big 80 at the back. It's also a good idea to mount something with a strong flash to the rear of your helmet for added visibility, especially for when it gets properly dark and the rear light on the bike has to be switched to a constant beam.

Well, that is our ideal commute and the setup that we think is ideal for the job. The motor really helps to make the act of getting to work less of a chore and it really doesn’t hold you back when riding for fun, in fact, we’d say that it makes the post-work ride even more enjoyable. The motor, for us, also means that we're happy to cycle the commute every day as it isn’t knackering. Then, if you have a bit more time, you can do a longer commute on the way in too. Mudguards are a must for British commuting and the fact that this bike rides just like a road bike means that it is fun to use for the post-work ride.