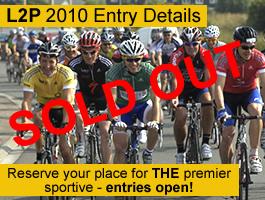 Next year’s London-Paris bike ride has sold out in less than 24 hours, prompting organisers to start planning a second long-distance event on the Continent for later in 2010.

Registration for the event, to be held between 24 and 27 June, opened on Monday, and event director Sven Thiele said: “The web traffic was phenomenal. We thought it would take a month for the 350 places to be taken but we sold out in just 20 hours.”

As we reported on Friday, Olympic gold medallist Rebecca Romero and ex-pro Magnus Bäckstedt will be among those tackling the event, considered the blue riband of cyclosportives and featuring a police motorcycle escort and rolling road closures to give riders a taste of the true stage race experience.

And they’ll be joined on the three-day, 550km journey – which is followed by a rest day in the French capital – by riders not just from the UK and Europe but also from as far afield as the US, Australia and Hong Kong.

His marketing and events business, HotChillee, will announce details of the second event, to be held next September in France, in the New Year.

A reserve list is open for London-Paris 2010 for anyone who was too late to claim their place, and you can register for that at www.londres-paris.com.