The Fenix is Ridley’s “all round” bike from their Endurance Series, offering, the Belgian folks say, the perfect balance between race performance, strength, durability and all day comfort.

But you don’t have to take their word for it. Lotto-Belisol’s André Greipel has piloted the Fenix in the Spring Classics and our very own Big Dave tested the standard Fenix and found it offered impressive all-day comfort. So there’s two convincing arguments right there. The new disc version of the Fenix differs slightly from the standard bike in that they’ve beefed up the frame where it matters to cope with the different forces applied by disc brakes over weedy calipers and the chainstays have been lengthened by 5mm, which means you can now squeeze 28mm tyres in there if you want.

The test bike had 25mm tyres and there was room to spare, so if you’re looking for both performance and comfort, and a bike that can take in the odd gravelly track then you might want to stop looking. The longer chainstays also improve chainline for a rear end that’s been spread out to 135mm to accommodate a disc friendly hub. 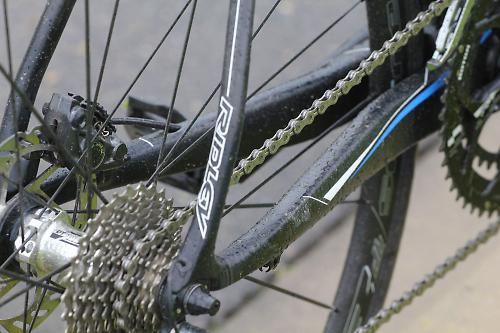 The frame comes with all the features you’d expect of a comfort bike these days. Ridley say they use 24T HM unidirectional carbon for the frame and fork with a tapered head-tube and flat section seat-stays to offer a bit of bump absorbing vertical compliance. 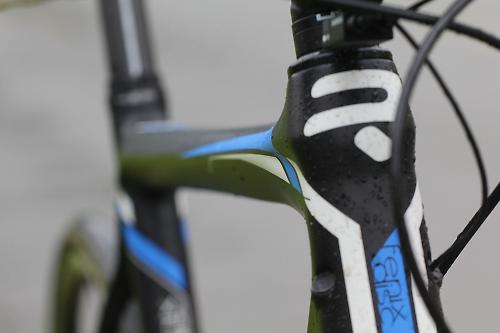 The top tube flares out to swallow the top half of the head tube and there’s an extra rib that extends along its length to keep yaw at bay. The seat tube spreads out to become a rounded square as it heads towards the bottom bracket which is a vast expanse of flex-fighting carbon, while a fat flat sided down-tube keeps everything in order. All the cables and hoses run internally and there are frame ports for both cable and wire-controlled gear systems. 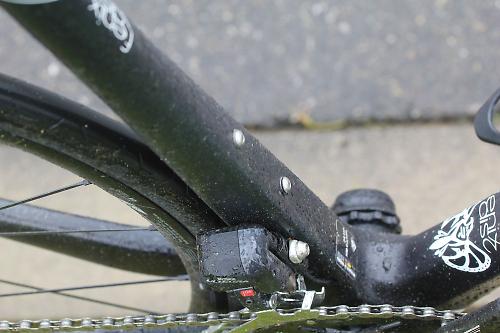 Despite all this fancy tube manipulation it still looks pleasingly like a normal bike and we like this black/blue/white combination because it matches the road.cc kit. But if it’s not to your taste you can take advantage of Ridley’s on-line custom paint program and have it painted any way your little artistic heart desires. The Fenix C10 Disc comes with an Ultegra Di2 11-speed based groupset, with electronic shifting and hydraulic brakes but should funds not allow there’s a C30 Disc variant with a Shimano 105 mix. In a deviation from the catalogue spec of an Ultegra chainset, Rotor 3D cranks are featured on this bike and come with “pro-compact” 52/36 chain rings which are becoming an increasingly popular offering on road bikes these days. We’d be happy if this crank upgrade became a production feature. 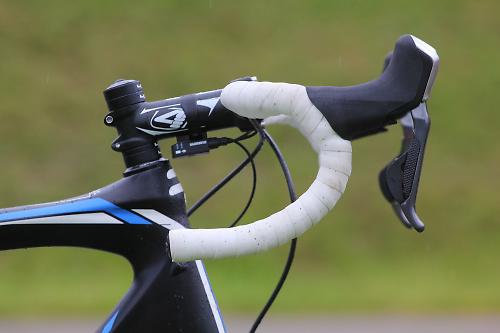 Finishing kit comes in the form of DT Swiss wheels and Continental tyres held on with quick-releases rather than bolt-thru axles as is becoming widespread, Ridley house brand 4ZA provide the bars, stem, seatpost and saddle. 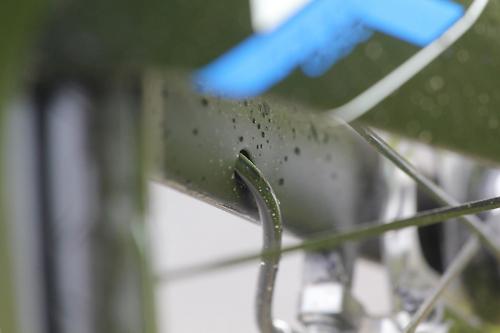 The impossibly perfect tarmac of the roads around Eurobike isn't the best place to test any of the comfort claims of the Fenix but it was easy to see how it was possible for Greipel to race this bike over the harsher roads of Northern Europe. The bike’s comfort doesn’t seem to be at the sacrifice of any speed.

The racing palmares of Ridley certainly comes through with the Fenix as it’s a sprightly beast. There’s a little weight gain thanks to the discs and electronic shifting over your pure-bred race steed but the eager stance of the Fenix is keen to overcome any of that. If ever you were sceptical of hydraulic discs on a road bike then a ride around the Demo Day area on a showery afternoon would be a good way of allaying those doubts. As a way of highlighting the differences between the new pretenders with disc brakes and the old guard sticking to rim stoppers it’s totally effective.

Demo Day is a random melee of bikes, pedestrians, taxis and coaches, all of whom were thinking about shiny new bike toys and none of whom were really paying attention to where they were going. That led to some interesting moments when being able to slow and stop predictably and efficiently on hydraulic discs rather than suffer the slightly panicky delay of wet rim brakes became a compelling selling point. 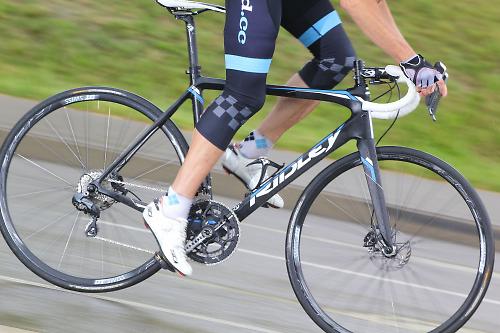 1
Rapha undergoes refinancing operation to write off debt but says it “far outperformed” rivals in 2022
2
Near Miss of the Day 848: An overtake worthy of the 'must get in front' title
3
Victory claimed for harassment campaign by “mob of decent people” as helmet cam cyclist deletes Youtube and Twitter accounts
4
Large vehicle may have crashed into controversial bike hangar, council says
5
“People need to see justice being done”: CyclingMikey says camera cyclists suffer online abuse because some motorists “feel they have the right to drive how they want”
6
Judge tells man who "played the system" after dangerous driving killed two young boys to expect "very significant sentence"
7
Near Miss of the Day 847: Careless caravan close call causes cyclists concern
8
Mavic launches the Cosmic Ultimate as “lightest wheelset in its category”