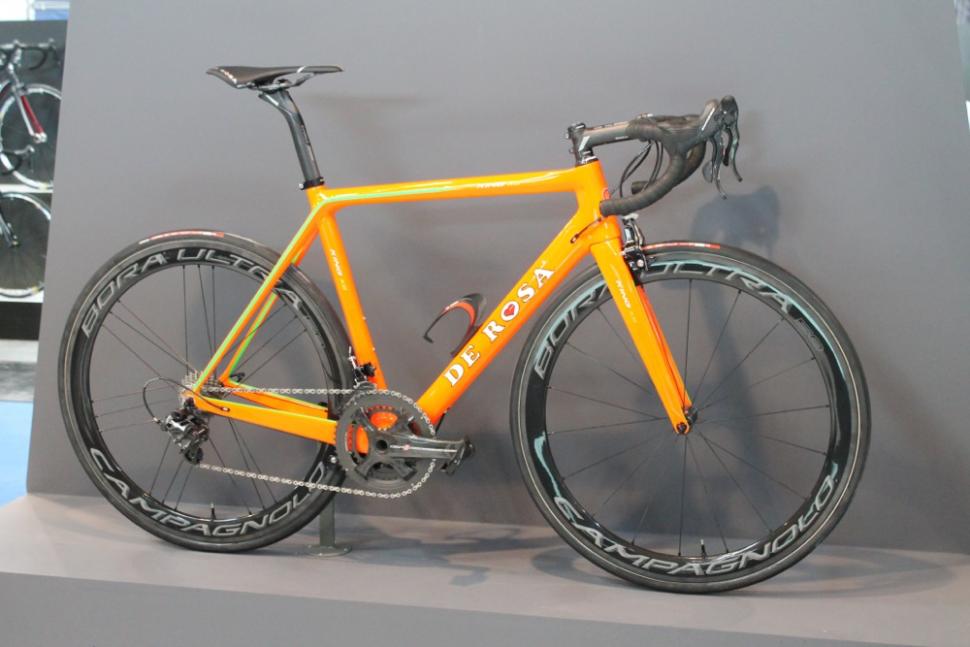 If you want cool bikes dripping with class, take a look at what we’ve got for you here. We’ve been wandering the halls of Eurobike and the place is bursting with road bike exotica. Here are some of the bikes that have caught our eye on day one.

We’re not pretending that this is in any way comprehensive. We’ll have plenty more models to look at as the week goes on, but feast your eyes on this lot for the time being.

Once you’ve had a good look, don’t forget delete your internet history. 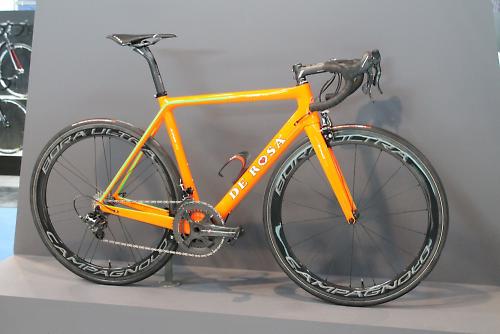 De Rosa make some of the classiest looking road bikes out there, even managing to put many other prestigious Italian brands in the shade.

The De Rosa King XS is a new model that looks super-stylish to us. The frame, constructed from T1000, T800 and XN10 carbon fibre, uses a BB386Evo press-fit bottom bracket and the head tube is tapered, as is usually the case on new performance bikes these day. De Rosa claim a frame weight of around 950g.

De Rosa use direct mount brakes on the King XS, where each brake arm is attached straight onto the frame/fork rather than via a central mount. It’s available in several different colour options. 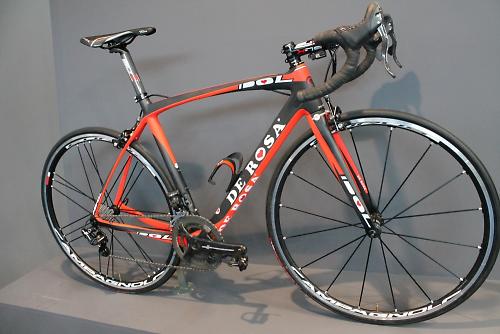 De Rosa have updated the Idol frame, and it’s available with regular rim brakes or with discs. This one uses regular rim callipers from Campagnolo. 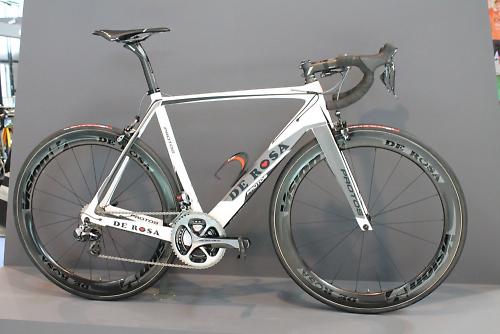 While we were visiting De Rosa, we couldn’t resist a snap of the Protos. We love this finish. We’re used to seeing big down tubes on road bikes these days but this one is an absolute beast. 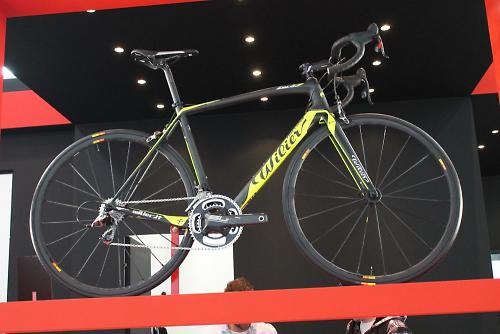 Wilier have updated their Zero7 road bike for 2015. Unfortunately (as is often the case at shows), the background didn’t make for great pictures but, believe us, this is another looker. 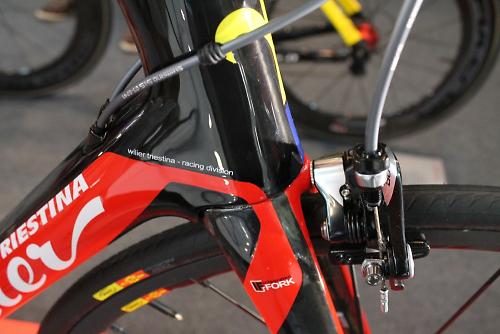 The changes for 2015 are relatively minor: Wilier have integrated the fork into the head tube/down tube slightly, altered the entry point for the cables at the top of the down tube – things like that. They still guarantee that every frame will weigh in at sub-800g – hence 0.7-something kilograms, hence the name. 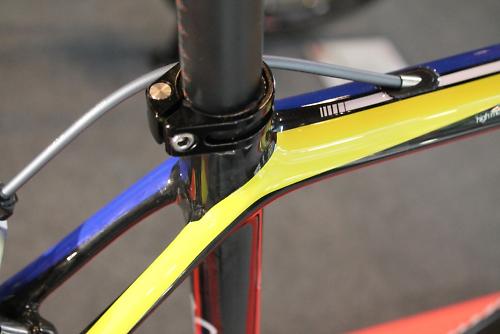 This version with vivid yellow accents comes in a Shimano Ultegra Di2 build and weighs a claimed 6.8kg complete. It’s priced at €6,998.

This is the new Dedacciai Atleta which boasts many of the key features we’ve come to associate with aero road bikes over the past few years – skinny fork legs and frame tube profiles, a seat tube that’s cutaway around the leading edge of the rear wheel, seatstays that join the seat tube low, and so on. The bolt for the seatpost wedge sits flush with the top tube and that looks like a very short head tube. 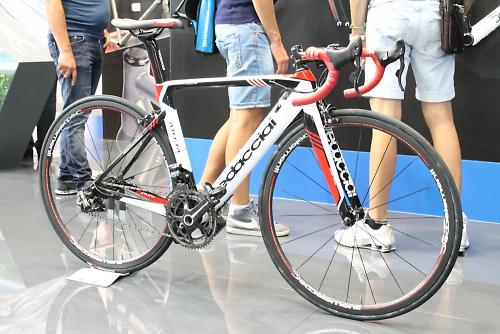 The frame is Toray unidirectional carbon fibre with a PressFit 30 bottom bracket, Dedacciai offering BB30 and BSA adaptors as spare parts, and the monocoque carbon fork has a tapered steerer (1 1/8in to 1 1/2in). Dedacciai claim a frame weight of 980g for a size medium, and 370g for the fork.

Unusually, though, the battery for the Campagnolo EPS electronic shifting is sits outside of the down tube, just in front of the bottom bracket, on this model. Surely, that has to go inside the frame. 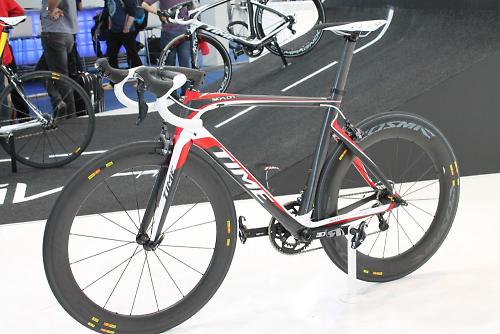 We’ve already shown you Time’s new Skylon which is a neat-looking aero road bike. Check out our previous story for all the details. 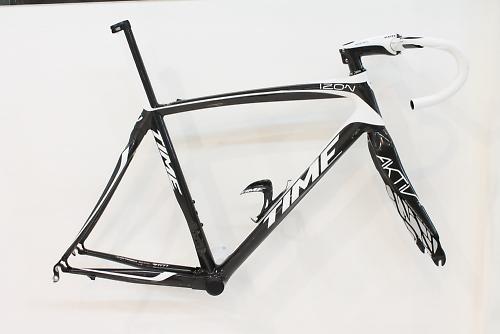 Time call the Izon their all-round road bike. Like the Skylon, it’s available with Time’s new Activ vibration-dampening fork with a mass, a sandwich of two spring blades and a damper in the leg. 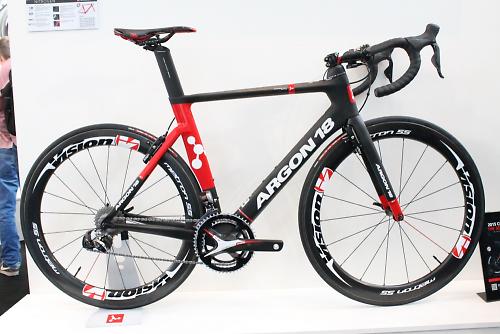 Argon 18 are introducing the Nitrogen aero road bike into their range for 2015. It uses TRP’s linear pull brakes tucked behind the legs of the monocoque carbon fork and the rear brake is similarly sheltered behind the seatstays 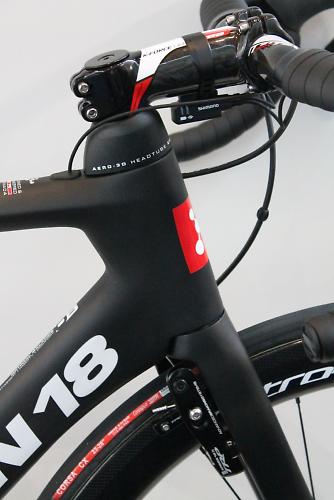 The headset is what Argon 18 call their Aero 3D design which tunes the height of the front end while maintaining good aerodynamics. 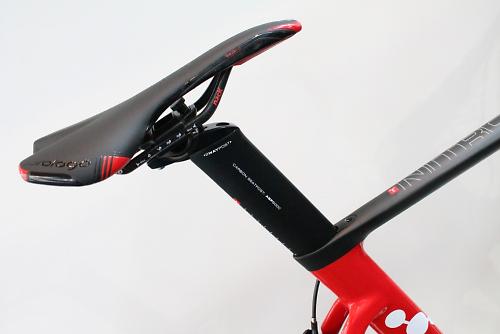 The 2-way Aero SP5000 seatpost allows you to adjust your ride position for both road and triathlon. 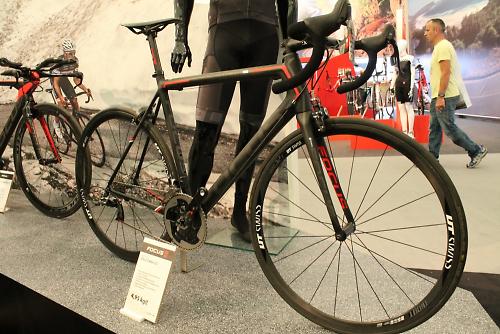 If you have €9,499 to play with, how about the Focus Izalco Max 0.0? With a SRAM Red groupset, an exclusive Schmolke TLO seatpost, THM Fibula brakes and DT Swiss RR32T wheels, Focus boast that it weighs in at just 4.95kg (10.9lb). 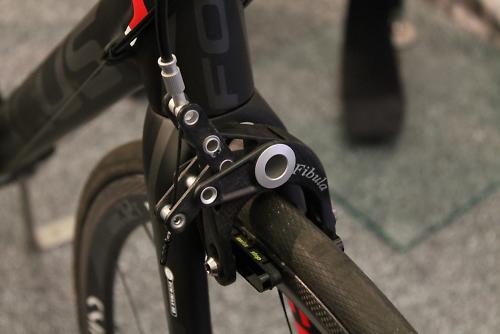 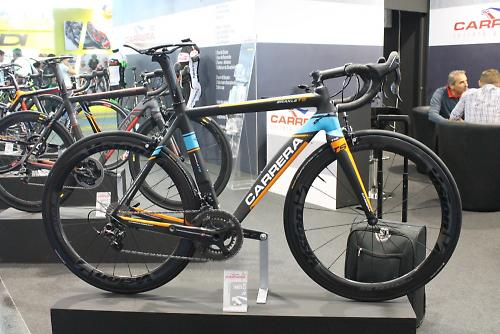 The Carrera Erakle TS isn’t a new bike but we think it looks cool in this blue/orange finish. 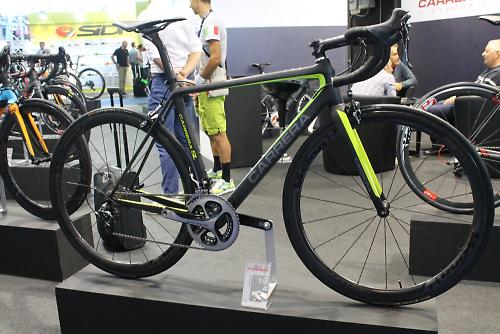 The SL730 has a claimed frame weight of just 730g for a size medium with the fork 330g. The wide-stance seatstays are intended to provide rear end stiffness while the flattened profile is designed to encourage up and down movement. The Cervélo RCA has been around for a while but it has now been updated. 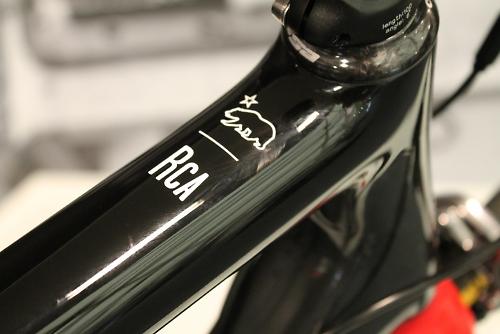 The RCA is hand-made at Cervélo’s Project California design facility – in the US, not surprisingly – from nearly 500 pieces of carbon prepreg. Cervélo say that every piece of material is individually weighed before layup and that each frame and fork is weighed before and after paint and again after final assembly to ensure maximum uniformity. Frames or forks with more than 15g variance are rejected and destroyed! 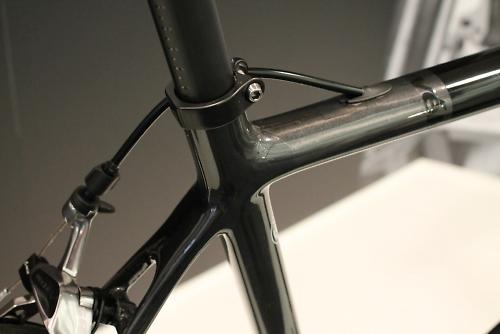 Cervélo have strengthened the top tube and down tube for improved impact resistance and they say that the boron-filament reinforced Project California fork is 20% stiffer laterally and 31% more compliant longitudinally, improving ride quality in both planes. They claim that the fork weight is reduced by 38g.

The updated version is available to order now and will be in stock from October.

Ridley have introduced a new Noah SL to the range for 2015. They have added grooves to the leading edges of the tube profiles, the idea being to cause micro turbulence which ultimately leads to lower drag (we’ll give you more details on the tech in a separate story).

The split fork has been updated and it is integrated into the head tube/down tube.

The SL is considerably lighter than the Fast. Ridley are claiming 980g for a size medium frame.

We’ve already told you about the new version of the Orbea Orca for 2015, and now we’ve had the chance to see it for ourselves for the first time.

It’s a major update, Orbea claiming a 900g weight (53cm) for the carbon frame, as well as increased ride comfort and stiffness. That increased stiffness has been achieved by using a PF86 bottom bracket.

They have also developed a new fork, which looks to borrow heavily from the fork used on the Avant. All cables, as before, are routed internally.

Another noticeable change is the switch from an aero to round 27.2mm seatpost, and dropping the integrated seat clamp in favour of a regular external seat clamp. That might seem a backwards step, but Orbea says it was a required move to reduce weight. They’ve also reduced the number of aluminium inserts in the frame.