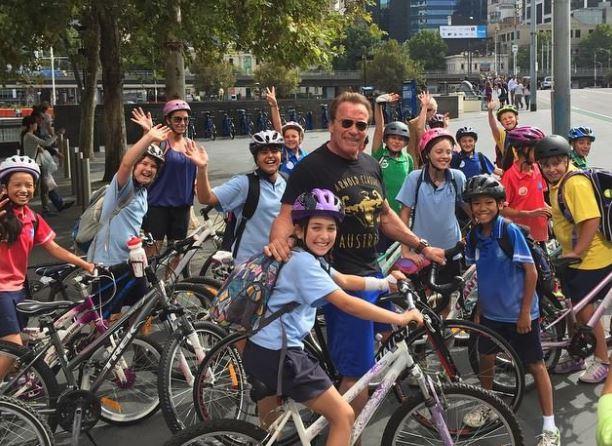 Arnold Schwarzenegger is the latest celebrity to fall foul of Australia’s compulsory cycle helmet laws after he was stopped by a policeman for not wearing one while riding a bike in Melbourne.

The Terminator star and former governor of California risked a fine of A$146 by ignoring the requirement to wear a helmet, which is mandatory in Victoria just as it is throughout Australia.

Pictures showing the bareheaded star were already circulating on social media – one on Schwarzenegger’s own Facebook account, captioned “Loved to see all these healthy and fit kids when I was riding around Melbourne today!” – before police caught up with him.

But instead of fining him, Senior Constable Robert Gillson pointed the actor to a nearby 7-Eleven store where he could buy a helmet costing A$5, reports The Age.

Helmets have been made available to buy through vending machines following concerns that the law was stopping people from using the city’s bike-sharing scheme.

"I saw a group of cyclists riding ahead of me and we just went up to do a routine intercept," said the officer.

"Then we noticed that Arnold Schwarzenegger was in the crowd. We spoke to him briefly and had a little chat with him about the reason why I pulled him over."

He added: "He was very likeable and very approachable. He stated that his father was a policeman, so there was very much mutual respect there."

Senior Constable Gillson said that when he comes across visitors to the city who are riding bicycles belonging to its cycle hire scheme without wearing a helmet, he tends to explain the law to them rather than issue a fine.

Other high-profile visitors to have been caught ignoring Australia’s mandatory helmet laws in the past include Mayor of London Boris Johnson and Twilight star, Robert Pattinson.

Schwarzenegger, who has ridden a Boris bike in London with Mr Johnson, tweeted him a link to The Age’s article, saying: “Hey, @MayorofLondon, now we have something else in common.”

He was in the city for the Arnold Classic body building event and attended the weekend’s Formula 1 Grand Prix.

The police officer’s comments confirm that in real life, Schwarzenegger is much more approachable than some of the characters he plays.

But  to paraphrase a line from Terminator 2: Judgment Day, “I need your clothes, your boots and your bicycle. Oh, and do you have a helmet I could borrow too, please?” doesn’t quite have the same ring to it.