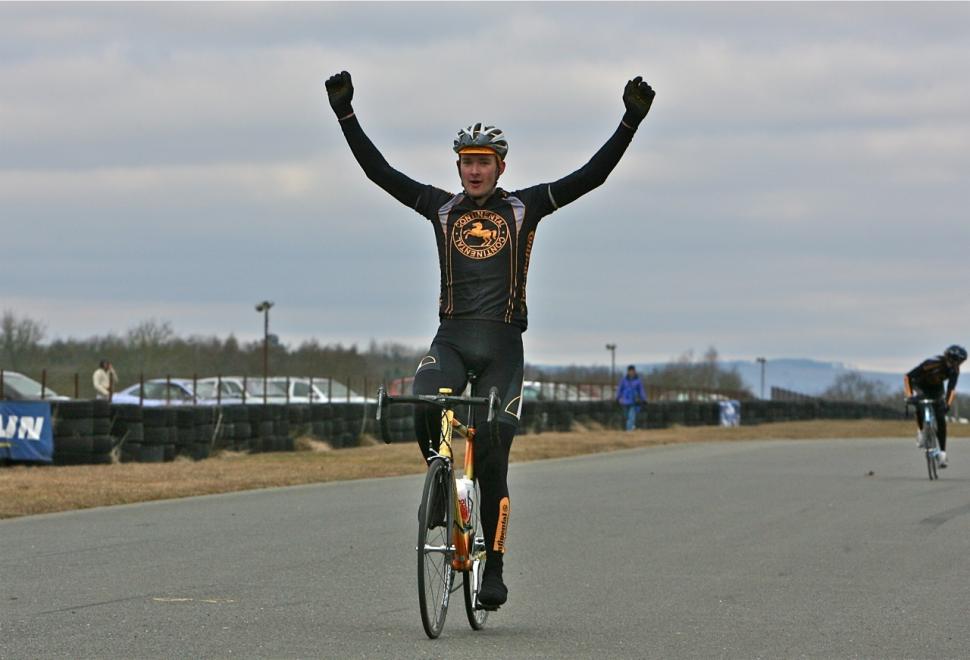 Kuota - road.CC riders notch up first victory of the season

The newly-formed Kuota-Road.CC Team has had its first win of the season with a textbook race in Derbyshire.

A windswept Darley Moor was the scene for an elite circuit event in which team-mates Dan Davies and Jon Mozley cruised home to finish first and second.

Mozley and Davies, along with ex Cervelo Pro Dan Fleeman, now riding for the Raleigh team, were part of a six-man break that went in the early stages of the race. Completing the leading six were Jack Adams, (Pendragon) Sam Redding (GWR) and Carl Dyson (BC).

Despite some spirited chasing from the bunch, the break worked well together and stayed away to the end.

With two laps to go Dan Davies put in a strong attack into the wind on the hardest stretch of the circuit, while Mozley stayed behind to keep a watchful eye on Fleeman and the rest of the break.

Once clear, former under-23 time trial champion Davies put his skills to good use and solo’d the final two laps to take the win.

The sprint for second place was a formality for Mozley. Third place went to Jack Adams, with Carl Dyson fourth, Fleeman fifth and Sam Redding sixth.

Mozley, 22, from Borrowash, is working under the tutelage of local cycling management duo Eddie White and Cherie Pridham after being with them since his junior days in three different teams, finally fulfilling a dream by signing his first pro contract for them last season.

Davies won the under-23 national time trial championship in 2006, then tried his luck in the hard school of Belgian racing for two years. He was back in Britain last summer, with a day-job in Walsall, but had his racing season seriously curtailed by the trauma of an armed break-in at his flat.

"Getting over that took pretty much the rest of the summer and ended with me calling it a season mid-September," Davies told the Derby Telegraph.

"I wasn't sure how I was going to jump back into cycling, fitness-wise, but I had started training by the end of September and, by the winter, I was putting out feelers.

"There's a wealth of experience to be learnt from and some extremely talented riders on the team.

"And yes, I feel I have something to prove.

"The few races I have done in the UK before have not gone according to plan but I think I can mix it with the best in this country on my day."

The rest of the Kuota-Road.CC line-up includes Andy Tinsley from Burscough, Martin Smith, from Milton Keynes, and another Dutchman, Jefte de Bruin, who was an international speed skater before switching to cycling.