Is this the ultimate belt drive bike? If you can think of more ultimate one… let us know
by Tony Farrelly

Belt drive bikes eh? You wait for months for one and then two turn up almost simultaneously and not just any old belt drives either, after the sharp looking, sharp handling cool steel Fixie Inc Peacemaker comes the supremely understated and yet quite fantastical Trek District Carbon.

The burning question in these parts is what is this thing of beauty for? Being cool would seem to be the answer and this is a very cool bike indeed. We've seen a lot of black carbon over the years but none has exerted anything like the pulling power of the District carbon – and it hasn't even left our office yet.

Not only can the District Carbon lay claim to being the ultimate belt drive bike it's got to be the ultimate road-going singlespeed too. What your £2800 buys you is a handmade OCLV Trek carbon frame – make that a limited edition frame, because Trek won't be knocking these babies out in any numbers. From what we we can see, by comparing the geometries (oh, and then we also noticed it says “Pro” on the spec sheet), Trek have based the frame on the Madone 5 series Pro geometry – basically the frame Alberto Contador won the 2007 Tour on – and given it a new back end the spacing between the rear dropouts needing to be wider to accommodate that belt and, of course, the frame needing to separate for when/if you need to change that Gates carbon belt. One thing you don't get though is the option of switching to fixed – doable we're sure, but you will need a fixed sprocket which doesn't come as standard.

For the District Carbon Trek have opted for a completely different approach to separating the frame than that devised by the chaps at Fixie Inc partly of course that is going to be down to the fact that working in carbon splitting the seatstay is going to be less of an option, but also from conversations we had had with Trek product guys when metal District belt drive was launched it's because they think that separating at the dropout makes more sense. 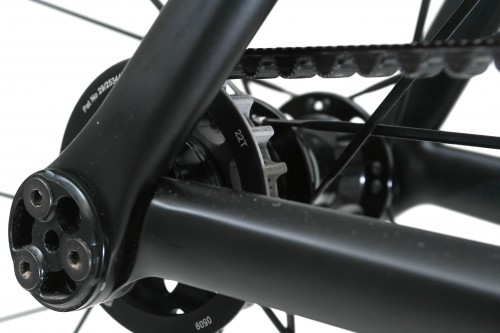 Certainly the method they've come up with is both ingenious and user-friendly – an eccentric rear dropout which is undone via three Allen bolts on each side, that would also seem to take care of any issues regarding getting the belt straight and to the required tension – the Trek belt appears to be held at a higher tension than the Fixie Peacemaker's.

Last year, Trek showed off a flat bar Madone put together by one of their engineers, Ray Waxham, who also devised and patented the method for separating the carbon frame. Waxham's bike was claimed to weigh 12lb (5.4Kg) a few months back we featured a similar bike, it might even have been the same one, given to Lance Armstrong also a flat bar and with lots of pimped componentry. It was inevitable that a production model would follow ours tips the scales at 6.96Kg (15.3lb) but you could easily drop weight of it: lighter wheels and bars – we're intrigued that Trek went for drops rather than flats which would seem to slightly limit the bike's urban appeal plus add weight with those levers – Lance went for a flat bar.

The Bontrager Race Lite fork has a carbon steerer, but then so do the Madone 5 series machines, it's also SpeedTrap compatible so you can run a digital sensor in the fork leg. The fork matches up with a Cane Creek integrated headset. Brakes are Bontrager's very swish looking Speed Limit design, which in appearnce at least remind us of the Revl carbon brakeset, these are matched up to Tektro road levers. Being a singlspeed there isn't that much more spec to tell you about, all the finishing kit is Trek's own brand Bontrager line and none the worse for that. You get Bontrager Race Lite Aero rims with Bontrager Race All Weather 23mm tyres, handlebars are Bontrager Race Vrs with a comfortable bend and wrapped in black leather bar tape, the stem Bontrager Race X Lite with 7° of rise, saddle… Bontrager Race Lite… you get the picture. The drivetrain isn't Bontrager though – that's the Gates Carbon Belt matched up to an FSA Energy 55T sprocket pulling a 22T rear sprocket. Gearing for the Trek is lower than on the Fixie – the ratios giving something closer to a 67.t in gear whereas the Peacemaker is nearer 75in – so it should go up hills easier, being a nudge over 15lb shouldn't do it any harm in that department either.

The District Carbon is certainly the most stroked bike we've ever had in our possession people just can't seem to keep their hands off of it. It really is a thing of beauty so much so that in the couple weeks since it popped out of the box we haven't taken it outside… because it's been raining. We just couldn't bear to. Bizzare really because the belt and the lack of oils should it shrugs off the wet – muck should just drop off it and there's no lubrication to wash away. No bike has ever had that level of special privilige in these parts and sadly for it. 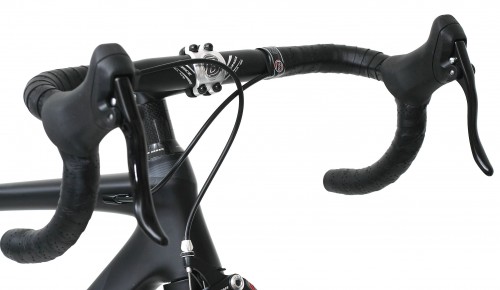 We can't help wondering though whether this is a bike with a bit of an identity problem: the frame, the fork, and basically everything about the way the District Carbon is set up says (this bike is way too cool to scream) performance road machine but the singlespeed belt drive would seem to be all about urban riding – in which case Trek could have ditched the bars and levers and shed some weight and cost in the process… Hmm, Trek aren't giving us any clues on this either, according to the blurb on their website the District Carbon is about becoming “the envy of all” which undoubtedly you would be if you owned one if only for the fact that you could afford it.