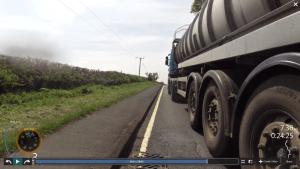 Mumsnet, the social forum for parents, has been discussing a topic slightly removed from the usual day to day minutiae of parenting; close passes.

One user, GilMartin, posted a road.cc article about 16 police forces rolling out a sting operation on drivers passing dangerously close to cyclists, titling it: “Am I being unreasonable to be glad that *some* police forces are going to tackle the dangerous overtaking of cyclists?”

It generated a lively debate, with one user asking: “what has always confused me is whether you need to leave as large a gap when overtaking cyclists in a cycle lane?”

One responded: “I think cycle lanes may have caused some confusion. Most are in 30mph limits, so I slow down and give as much room as possible. In cities there is no other choice really. “

The initiative as reported by this site seemed widely welcomed, with a woman responding: “Oh, this is good. I think a lot of people have absolutely no idea how close they are, which is quite scary. Round here there are lots of cyclists, and someone posted his cycle-cam on a local news site - you could see drivers flicking past with a hair to spare. But what was really worrying was a lot of drivers responded saying they'd no idea that was a problem.”

Another said: “I'm really pleased, we had a nasty spate of cyclists being knocked off by dangerous overtakes - three in one week. Two broke bones, the other died, leaving his pregnant wife behind. I was pregnant at the time myself, I asked my husband not to go out road riding (we're both mountain bikers normally, where the only thing to worry about is your own stupidity!) “

But of course there were the haters, Dowser being a user who wrote: “It really scares me cyclists are on the road.”

She was shot down by another user, who said: “Where would you like them to be Dowser? Up trees?

“I treat cyclists like they are taking up as much space as a car, I will only overtake when I would overtake a car, I give them the car width, then overtaking space.

“This is both selfless & selfish. I don't want to kill them & I don't want to have to live the rest of my life knowing I've killed someone. If people behind me don't like it, they can fuck off. Plus I end up feeling protective of the cyclist - with my car in between them & knob driver.”

Originalmavis added: “So many cyclists appear to have no bloody road sense. my heart is in my throat in some parts of town as they swarm around your car - under taking, over taking, cutting across your nose at queued traffic. No laws on lights or safety equipment. Fly through red lights, over zebras and pavements…”

One more said: “ I think all bikes should have some form of number plate and be registered to the owner.”

But many more of the posters took a very measured tone. Museums said: “ Our city has a lot of 20mph roads now when there are lots of cyclists. It took some getting used to driving that slow but I must admit it helps, there's far less stress holding back behind a cyclist going at 12mph when all the traffic is only going at 20 anyway.”

But Brokenbiscuit said: “I must admit, my heart sinks when I see a cyclist in front of me on a busy road. I am completely clear that I will not put them at risk, and so I will drive behind them until it is genuinely safe to overtake. I remember being told that you should leave enough space so that you would be able to clear them even if they suddenly fell off their bike and into the road, so I use that as my guide. They are very vulnerable. But god, I hate the impatient buggers who sit behind waiting for you to edge past with an inch to spare. Selfish bastards just have to wait.”