Garmin have a big share of the bike GPS market, and for good reason: their units generally perform well, are well sealed against the elements and eke plenty of running time out of the battery. They've not always been the easiest to use however, and Garmin have been making strides toward a simpler system with the Edge 500.

The other thing that's been happening is the proliferation of map-based systems. The 705 was never very strong from a mapping point of view, and that's one of the main things that Garmin have addressed with their new unit, the Edge 800.

'The 705 was a bit ahead of its time and missed out on a lot of mapping functionality', Garmin told us. 'This new unit brings across all the performance benefits of the Edge 500 and adds in much better navigational capabilities than the Edge 705 could ever deliver. You could use this if you're a serious road data geek or for a week long tour. It's also much more suitable for off road riding in the UK because it can display OS 1:25k and 1:50k mapping.'

The biggest changes are the fact that the display is colour, and that it's a touch screen which gives you much easier access to the unit's functions. Those of you with a Samsung Galaxy or iPhone 4 might scoff a little at the screen's quality and resolution and you wouldn't want to watch movies on it, but the lower res means that it's a lot less power hungry and it's designed to be legible in the open air too. Battery life is a claimed 15 hours; Garmin told us that was a 'strong' 15 hours, which we'll take to mean that it actually does last for 15 hours... Garmin are also working with Power Monkey to produce a backup battery that should extend the life of the unit to 35 hours, enough for a week of riding. 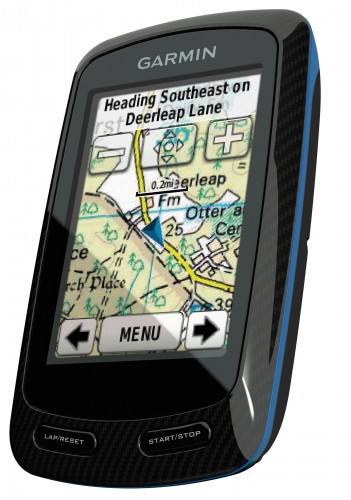 The unit is available for £349, or £399 with heart rate and cadence. For an extra £50 you get the whole of the UK at 1:50k scale on a micro SD card that slots in the back. The OS data is mapped to digital street data so that you can get turn by turn directions on the road. Garmin are providing a free route planning application for your PC that allows you to plan routes on the mapping that you have loaded onto the phone. 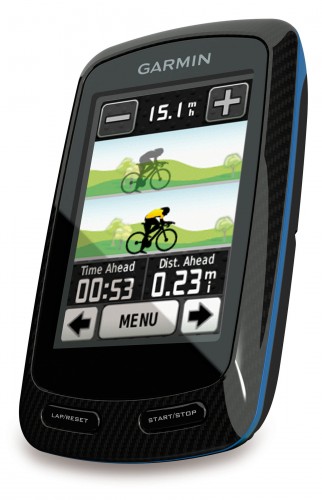 All the functions that 705 users are used to are there in more or less the same format, though the virtual partner has been spruced up a bit. We're off down to Southampton when we get back from Eurobike to have a go for ourselves, so we'll let you know what we think of it when we've had a chance to use it in anger.