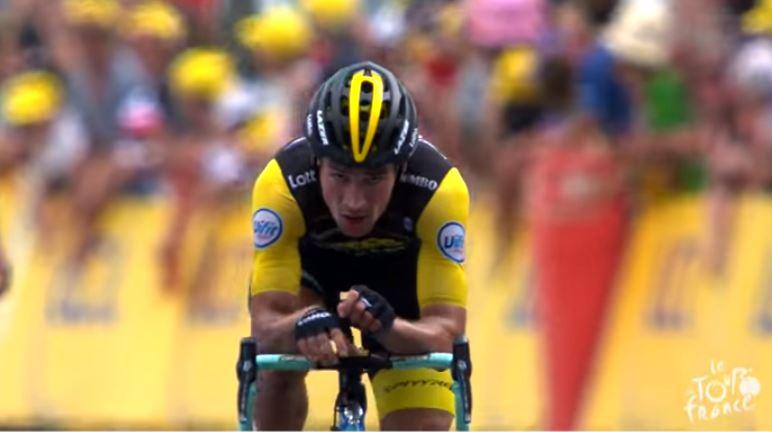 Team Sunweb rider claims Roglic benefited from drafting on way down from the Col d'Aubisque yesterdau...
by Simon_MacMichael

Tom Dumolin has said that Primoz Roglic’s win in Stage 19 of the Tour de France yesterday was due to the LottoNL-Jumbo rider drafting a motorbike on his way down from the Col d’Aubisque to the finish in Laruns.

The Slovenian’s victory saw him go from fourth to third overall, knocking Team Sky’s Chris Froome off the podium, and he now lies 19 seconds behind Team Sunweb’s Dumoulin ahead of today’s individual time trial.

However the Dutch rider – who himself received a 20-second penalty for drafting his team car during Stage 6 of the race – was not happy with the manner of Roglic’s victory.

"He was flying downhill and eventually I got dropped on a straight part just because he was on his tube and full in the slipstream of the motorbike,” Dumoulin said after the stage

"I was sprinting to his wheel and I couldn't get any closer. I just got dropped on the only straight part of the downhill. It's ridiculous really."

"I am super disappointed," he added. "It doesn't make sense. That bike should have been behind us."

Team Sky’s Geraint Thomas, who finished second and extended his overall lead by six seconds, said: "The way he did get the gap was a little surprising. I was concentrating on the corners, following Tom’s wheel.

“There has been an issue with motorbikes getting too close, but I didn't see it."

“Roglic was better, that is not up for discussion. He couldn't do anything about it, he was the strongest and claimed a nice victory."

The stage winner also pointed out that there was nothing he could do about the presence of the motorbike on the descent.

"What can I say?,” he said. “I can't comment on things on which I don't have influence over. I don't see where the problem is."

Both Dumoulin, the world time trial champion, and Roglic, a past Giro d’Italia time trial stage winner, are among those vying for the win in today’s 31 kilometre stage from Saint-Pée-sur-Nivelle to  Espelette.

After former ski jumper Roglic won that Giro d’Italia stage in 2016, the French TV programme Stade 2, which had been investigating motor doping together with Italian newspaper il Corriere della Sera, raised suspicions over a bike change he made immediately before the stage started.

The programme suggested that the late swap, apparently because commissaires ruled his original bike as not being compliant with the rules, meant that the bike he rode to a surprise victory would not have been tested for a hidden motor.