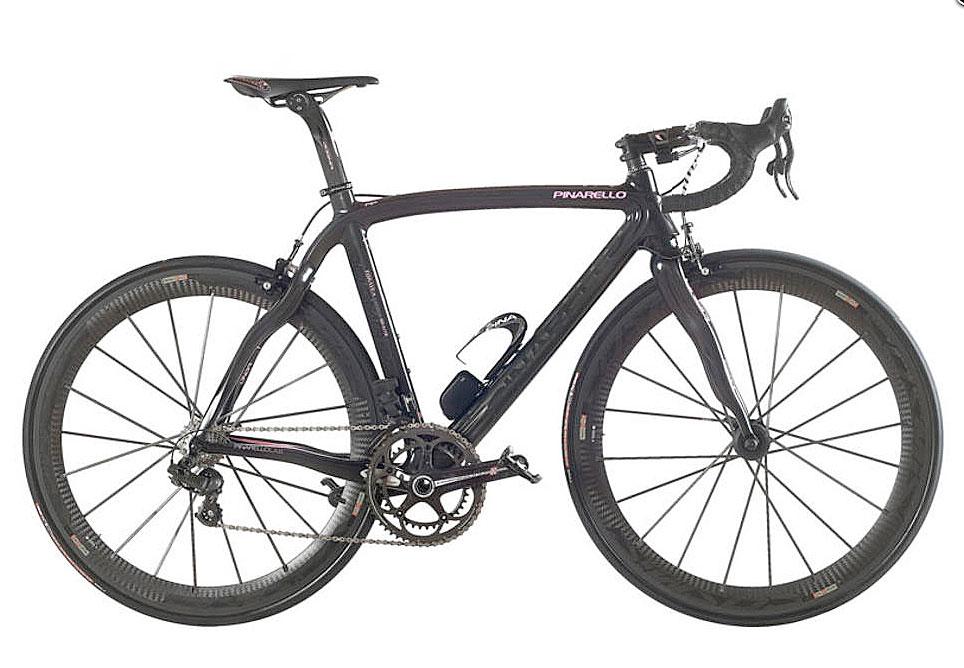 There's been plenty of abortive attempts at producing a reliable, high performance electronic shifting system for bikes, but it's fair to say that Shimano finally nailed it with Dura Ace Di2. That means powered gearing is here to stay, and we've already predicted that Ultegra Di2 will be announced this year. But what of Campagnolo?

Well, Campag's development arm, Campy Tech Lab, have been beavering away for years with an electronic version of the Record groupset. We remember Dario Cioni testing the prototype system as far back as the 2009 Giro, and although Campag have lost the race to market (by a good distance, it must be said) the electronic Record shiftgear will be getting another outing this year aboard the Pinarello bikes of Team Movistar; that much was announced at the Giro launch. We're guessing these are the final development stages ahead of a full launch this year, possibly at Eurobike. How will the Italian shiftgear compare to its Japanese counterpart? 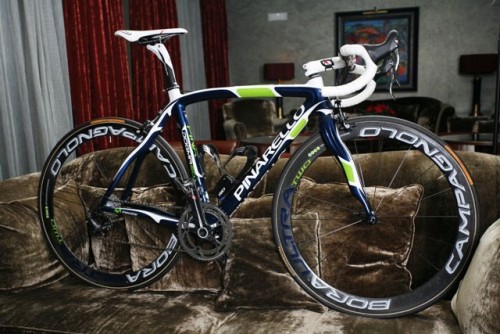 Basically, the two systems look to be fairly similar. The Campag system is battery driven, just like Di2; on the Pinarello development bike the battery (slightly larger than the Shimano one, by the looks of it) was positioned on the down tube behind the bottle cage, but we'd predict that most manufacturers will end up tucking it away under the bottom bracket in the same way that's currently happening with Di2.

Control wires replace cables to send the shifting data to front and rear mechs; to us that's still the most sensible way of attaching everything together even though the temptation to try fully wireless shifting must be strong. The front shifter, which requires more force, has a big motor that's positioned on top of the derailleur. The rear mech is a more slender affair with Carbon very much in evidence; it looks a bit sleeker than the Di2 unit from the pics we've seen so far. Naturally, it's shifting across 11 sprockets.

The levers ape the shape of current Record units in the sense that there's a control behind the brake lever and one on the inside of the hood, but the downshift button is more of a paddle lever on the electronic version; presumably the fact that it doesn't need to actuate a mechanical system means there's a bit more freedom to play with the design. Again, it's a Carbon construction like the mechanical lever it's based on.

Any big differences? Well we can't comment on the actual function but from a hardware point of view the Campag system is missing Di2's black box, the functions of which are no doubt incorporated elsewhere in the system. Other than that, you're getting what looks to be a similar system.

Campy Tech Lab have had this system in development for long enough that they must be pretty confident that it will give trouble-free shifting, and it was good enough for a full pro peloton trial nearly two years ago. Will it catch on? Yes, in a word, assuming it's good; we reckon the adoption pattern will be similar to that of Di2. There's no doubt in our mind that in a racing scenario, where you have a mechanic to look after your bike and remember to charge your battery, Di2 is a significant performance enhancement over mechanical Dura Ace. You've only got to use the two systems side by side to feel the difference. At the moment Di2 is the best there is, and more pro bikes than ever will be sporting it this year. Uptake at the beginning was slowed by fears that the system would be unreliable, but there's been very few teething troubles.

And the rest of us? Well, we don't need it. Most of us don't need mechanical Dura Ace either, if we're honest. 105 would probably do. But there's plenty of people who can afford to spec Di2 whether they need it or not, and you'll certainly see it this year on sportive start lines and probably at the local crit or evening ten as well. Sooner or later it'll just be part of the furniture. The trickle down begins this year too with the launch of Ultegra Di2 (we predict, anyway) which will bring electronic shifting within reach of even more people. How far down will the technology go in the end? At least one more level down, we'd guess, possibly in a slightly different guise.

As for the Campag system, we know people who are dyed-in-the-wool Campag riders who have switched to Di2 because, quite simply, it's as good as it gets. Assuming they've refilled their pockets they'll no doubt be in the queue for the new electronic Record shiftgear; with all other things being equal, some people just prefer Italian and we doubt that'll ever change. Will the new Campag groupset be better than Di2? We don't know. If the history of the two firms is anything to go by it'll be broadly comparable in terms of function, more Italian-looking and a bit more expensive. That extra overhead doesn't seem to put people off with the cabled systems, so there's no reason to suspect the electric groupsets will be any different.

It goes without saying, obviously, that we'll jump at the first opportunity to have a go on Campag's new electric kit. Stay tuned...