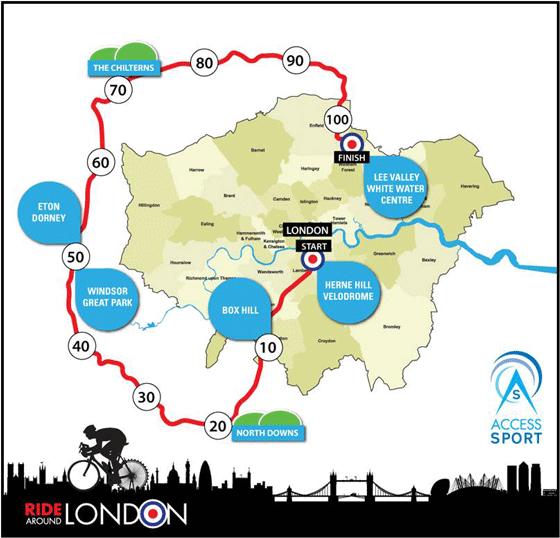 Mayor of London Boris Johnson has given his backing to this September’s inaugural Ride Around London, a 115-mile sportive taking in a number of venues linked to past Olympic Games held in the city as well as some being prepared for next year’s Games.

The ride, announced in March this year, is also backed by Olympic gold medallists Rebecca Romero, James Cracknell and Jody Cundy, and organisers have also released details of two shorter routes as well as a cycling festival that coincides with the event, which takes place on Sunday 25 September.

Money raised will enable Access Sport to carry on its work in promoting sport including cycling to children in deprived parts of the capital, where it works with some 130 sports clubs including Tower Hamlets Cycling Club, Cycling Club Hackney and and BMXtreme in Newham.

"As a keen cyclist myself, I am hugely supportive of Access Sport's new Ride Around London cycle challenge,” said Mr Johnson. By jumping on your bike, seeing our great city in all it's glory and having a huge amount of fun, you will also be helping to secure a genuine sporting legacy for those Londoners who need it most. Book your place today!"

Organisers Access Sport have revealed that two great names of British cycling have helped finalise the route of the ride, Bob Spencer, who raced against the legendary Fausto Coppi in the 1950s, and Keith Butler, former British Professional Road Race Champion who set up the Surrey Road Race League.

“We will be taking people past the spot where there was a punch up during the 1948 Games road race in Windsor Great Park. Team GB won silver that day,” said Butler.

The route continues its Olympic theme by starting at the Herne Hill Velodrome, the last surviving venue of those 1948 Games, tackling Box Hill, which will be used in next year’s road race, passing Eton Dorney Lake, site of the London 2012 rowing events, and finishing at the White Water Centre in Lee Valley Park.

Event organisers Access Sport and Andy Cook explained the reasoning behind the itinerary: “We wanted to create truly memorable routes, with input from local London club experts who really know the best of their own patches, to show off the fantastic cycling London has on its doorstep.

“Especially as the Olympics are now just over a year away the inspiration for us and for participants is to help give a little back to cycling and to other sports for young people, to create a meaningful legacy.”

Meanwhile it has been confirmed that there will also be two shorter routes on offer, a semi-circular one starting at Windsor and ending at River Lee Country Park covering 60 miles, and a 25-mile trail loop starting and finishing at the latter venue, where there will also be a cycling festival which organisers hope will attract families.

Full details of all three rides as well as online entry are available on the Ride Around London website.