How much light is enough? our findings from the 12hr...

How much light is enough?
by dave atkinson

One of the reasons we wanted to get out and ride the Jole Rider relay was to put a few lights through their paces, and see what you get for your money with various options. We wanted to see how the beams of each light stood up in relation to one another, so we set up a bike at the edge of the course and shot each light with the same exposure as it lit up two reflective jackets, one at 10m and one at 20m. It was dark (natch) and we were tired, so apologies for a couple of the shots that are slightly blurred due to mist on the lens... We'll be posting full tests of these units, but for now here are our (slightly blurred) findings from the night. One thing seems fairly obvious: LED lights will replace all other types of cycle light fairly soon. They're solid state and hard to break, they don't use much power, they run fairly cool, they're tolerant of a wide range of voltages, they last for ages... what's not to like? Halogen and HID lights still abound in the market, and they're likely to be around for some time to come, but the best light now in pretty much every sector of the market now is an LED unit, and with China tooling up to pump more and more of the things out, and the advent of the new Cree bulbs which replace Luxeons as the standard, it's becoming less and less appealing to look at any other technology. Some non-LED lights (such as the extraordinary B&M Big Bang) still hold their own, but the list is getting shorter each time a test happens. The light that most epitomised what's right with the new LED units was the Ultrafire WF606A, which came zip tied to the helmet of secret road.cc weapon Anthony (yorkshire_pk_ripper on the forum) as they don't come with a mount – they're just sold as torches. He managed to get them for about £8 each, and though we couldn't find them that cheap they're certainly widely available for £15 or less. They run from 2 AA batteries and the beam is well focused – the glass lens is a nice touch. It's more spot than flood so it works well as a headtorch, when you can direct the light where you need it. www.kaidomain.com 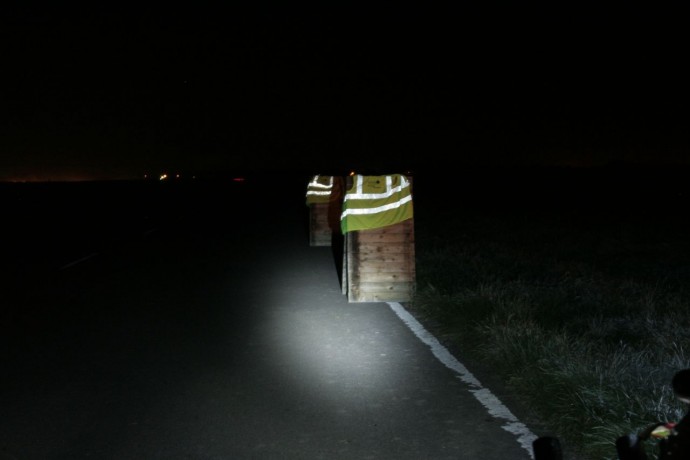 Beam test: Ultrafire WF606AThe other Cree unit, the Fenix L1D Q5 (£35), was also impressive, especially as it managed its very strong beam from just a single AA battery. Ok, so the run time suffers a bit but it's no big deal to stuff a couple of extra batteries in your jersey Or, indeed, enough to ride all night. Like the Ultrafire the beam is well controlled (not quite as well controlled as the image might suggest – those dark shadows down the side of the beam are the tri-bars!) and plenty bright enough for most night-time road trips. Unlike the Ultrafire, it does come with a bike mount that's simple and effective. The mount holds the light firmly (it's super-light, so unlikely to move around much anyway) in a velcro loop. There's no lateral adjustment, so you'll need bars that point straight forward, not swept units. www.fenixtorch.co.uk 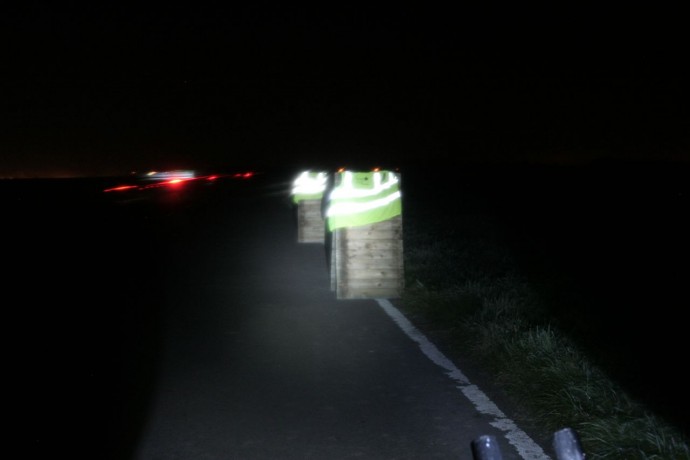 Beam test: Fenix L1D Q5Brightest on test by a stretch were Knog's Gator 605 set (£220), a top end system with a price to match. We all liked the chunky rubber design and the smart control panel, although the indicator lights did get a bit distracting at times. With two 3W heads – one spot and one flood, though there didn't seem to be much to choose between them – and a round town light with flashing mode, they were quite capable of producing much more light than we needed for riding on the road, or a darkened airfield. Which begs the question: how much light do you need? Already people on the forum are telling of off-road night excursions with nowt but a cheap LED torch to light the way, and certainly I've relied on a Silva 3W headtorch for off-road duties on more than one occasion. What's the extra £180 over two Ultrafires getting you? Well, it's getting you a lot of nice industrial design and an expensive (in these times of shortage) Li-Ion battery. And probably a bit more light, but not much. And you can always get a third ultrafire. and a fourth. And fifth... www.knog.com.au Beam test: Knog Gator 605The Niteflux Vision Stick Photon 4 (£99) houses a 4W LED and a Lithium Ion battery in what's basically a fairly beefy torch. The light separates at the head for charging, and cleverly you fit both ends into the bike mount and tighten – there's no danger of the light falling off the mount. The Aluminium thread is a bit shallow, though, and is already starting to round off, so you need to be careful when putting the thing together. The beam is impressive (there's a low 1W setting too that gives you 8hrs of light) and the whole package is nicely finished. Again, stacking up against the cheaper torches it's losing out in terms of value, but at less than half the price of the Knog it's more affordable to the commuting masses. www.fisheroutdoor.co.uk 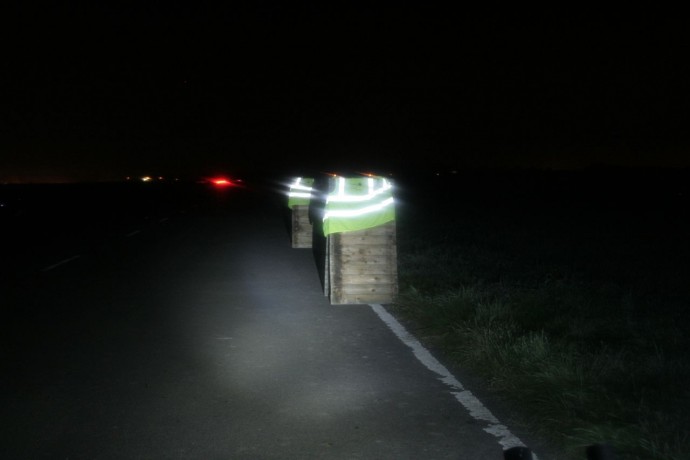 Beam test: Niteflux Vision Stick Photon 4And what of the Heath-Robinson own brand road.cc light? Well, apart from the resemblance to a bomb and the tendency of the end to fall off, it acquitted itself... okay. The beam was plenty enough to ride by, though the lens didn't focus the light there was too well – too much around the edges and not enough in the middle. Mostly though, we were struck by the futility of trying to make something in your shed that's not quite as good as something you can buy ready made for less money. We also tried a couple of town lights – the Knog Skink and the Cateye EL-220 – which both worked fine but are more for being seen than for seeing. Again, we'll be testing them more throughly, and in their natural environment, soon. Beam tests for all these lights are in the Beam test gallery So what's the conclusion? well, for most of you the conclusion is simple: go and buy cheap LED torches from t'internet and devise ways of fitting them to your bike. Or just do as Anthony did, and tie them to your helmet. You can spend more (much more), but for most riding on most bikes they'll push out enough power to get you home without wrapping yourself round a tree/car/signpost. One thing that's worth mentioning is that light manufacturers still aren't making their systems visible from the side, as required by the British Standard that governs cycle lights. The Cateye was the exception here: all the others had little or no side visibility, and as such are technically not legal. This is forgivable for the cheap torches – they're just torches after all, not specifically bike lights – but less so of the more expensive units.