BioLogic, the brand that started out as an accessories division of Dahon selling parts peculiar to their folding bikes but is now a fully-fledged part of the breakaway company Tern, has launched a folding helmet called the Pango that we first saw as a Dahon prototype at Eurobike.

Intended as an urban helmet for commuters which fits right in with the utilitarian ethos of both Dahon and Tern, the new model has a pared-down look in plain black or white and a party trick in that it collapses in on itself to occupy half the working volume when not in use.

This feature may come in handy for folks who leave their bikes locked in open places and prefer to take their helmets safely with them. According to Joshua Hon, head man at BioLogic who also appears in the accompanying video, "the Pango stores easily in backpack, bag or even a large briefcase." The folded size is 23 × 18.5 × 13cm and the weight 515 grams, on the heavier side for foam racing helmets but the outer shell being skater-style hard ABS bodes well for durability especially if it's going to be clattering around inside a bag.

We've been looking at various generations of Pango prototypes at every Eurobike since 2009 and even trying them on so there's no doubting BioLogic are taking the new product seriously and it even has a relatively competitive price at £88 considering it does appear to quite easily lose about half its volume when folded.

Which is unlike the Overade folding helmet doing the rounds of the internet gadget sites at the moment. Designed by the French firm Agence 360 who are behind some of Look's latest frames and Keo pedals, the proposed helmet which is claimed to be going into production shortly does look techy but also only appears to fold in half but not actually reduce its volume by any real amount. 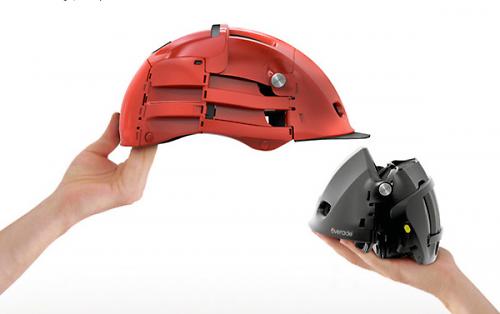 We're not entirely unused to the idea of folding helmets; apart from seeing the developing Pango, 2008 saw the Stash from a British startup that failed to catch on, possibly because that, too, didn't appear to actually fold significantly enough to warrant too much excitement. But the last three years has seen a significant increase in the commuting market that the ex-Dahon people understand very well and the Pango does fold smaller. We guess it remains to be seen and we're looking forward to trying one in its intended role.