Electron's new lights are moving away from the battery-pack-and-head-unit formula they've been successfully using for the last three years at the top end of their range. The Terra 3 and Terra Mini lights are torch-style affairs with an internal battery. That's not a new idea, and certainly it's one that's been gaining ground over two-part systems as battery technology improves and LEDs get brighter for the same power consumption.

The Terra 3 and Terra mini will eventually take over from the Terra 1 and Terra 2 which are now into their third year and superseded by the more powerful Evo versions, but unlike those lights, which were a development, these are something entirely new for Electron. It'd be remiss not to mention that the new Electron lights look and feel a bit like Exposure units: clean and nicely machined with simple, slightly industrial controls; reassuringly weighty. That's not to say they've copied Exposure, except in the decision to marry the emitters and the battery and make them solid. They're a similar kind of light is all we're saying.

The Terra 3 is the daddy and a chunky beast indeed. It features a machined Aluminium body and three LED emmitters that throw out a claimed 800 lumens. Certainly the 'shine it in your eyes' test ended in swearing and confirmed that it's plenty bright. It's difficult to say what the beam pattern's like from shining it around a show marquee but since it's aimed at off-roading you can expect it to be fairly dispersed.

The battery is good for three hours on full power, and there's two low power settings too, the lower of which still kicks out 250 lumens and extends the battery life to nine hours, so it's certainly an option if you're pulling an all nighter on the road; 250 lumens will see you for most road stuff and you can power up for the sketchy bits. You don't have to cycle through off to get to back to full power either, so that's good. 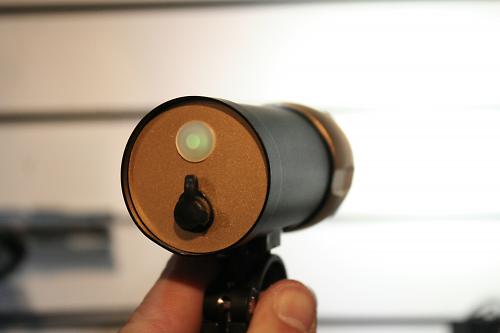 At the back there's a simple on/off switch that glows in various colours according to the state of the battery, and a recharge port that's waterproofed on the inside; the rubber bung is just there to keep crap out of the socket. It attaches to your bars with a standard band-style clamp, and you'll be able to get one for about £150 when they arrive. 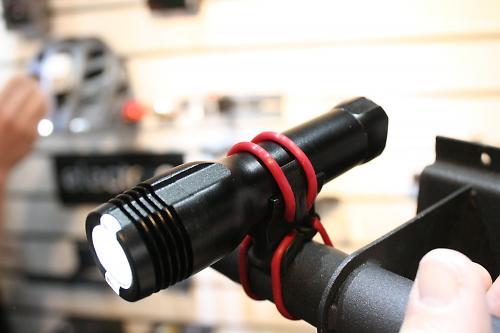 The 160-lumen Terra Mini is aimed more at the commuter market, and features high and low power settings and a pulse mode - 20 lumens constant with a full power flash - that will be useful both as a daylight-running light and a get-you-home mode when the battery is on its last legs. It's good to see that the Terra Mini also has side illumination windows in the lens for better visibility about town. Like its bigger sibling, the Terra Mini has a colour coded switch to show the battery level, and a charge port, and that's it. You double click to turn on and hold to turn off, so there's no blackouts flicking through the modes. 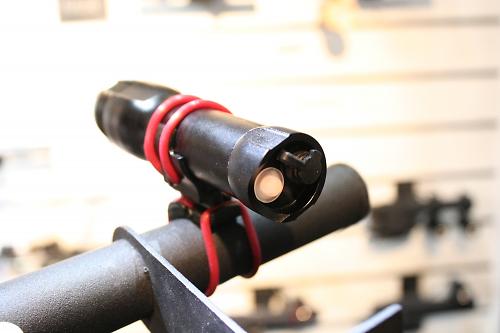 The light clips into its mount and is secured with an O-ring (they'll be black on the production light); there's no mount on the light itself so you can use it as a torch too. The Mini is small and light enough to be used as a helmet light too, and helmet mounting kits will be available. List price for this one will be around £60.