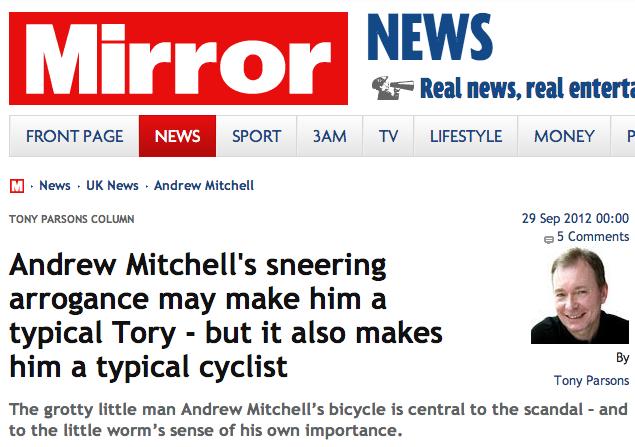 Tony Parsons follows template of The Terrible Journalist's Guide to Writing an article about bicycles to the letter...
by John Stevenson

Formerly a “hip young gunslinger” covering punk rock at the New Musical Express, Daily Mirror columnist Tony Parsons has become the latest national newspaper writer to follow the terrible journalist’s guide to writing an article about bicycles and crank out an opinion piece full of the same old nonsense.

Shortly after Jan Etherington had a pop at cyclists in the Daily Telegraph, the 'As Easy As Riding A Bike' blog brilliantly lampooned her column with a how-to article on writing an anti-cycling piece.

Parsons has followed the template to the letter.

Step One, according the blog, is to hang your column on a recent news story involving a bike. Better if the bike is somehow central to the story, but as long as there's one in shot somewhere, just go for it. Here's Parsons right on script:

“There is an explanation for Andrew Mitchell’s sneering arrogance towards the police that has been overlooked – the creep rides a bicycle.”

On to Step Two, which is to say something positive about cycling, so you sound open-minded. Parsons writes:

“Don’t get me wrong – cycling is great. You help the planet, you keep fit...”

So far so good, right? But here it comes:

“... and, best of all, you are completely free to ignore the red stoplights that apply to all other road users.”

Groundwork laid that cyclists are bunch of dreadful lawbeakers, Parsons gambols off to Step Three, make it obvious that it is the use of the bicycle itself that has somehow precipitated the bad behaviour:

He's in the home straight now, so all that remains is to trot out as many cliches about cyclists as possible.

Describing being missed by a cyclist who ran a pedestrian red light while he and his daughter and dog were crossing, Parsons describes cyclists as “moronic Lycra louts that, no matter where you live, you see every day of your life – riding on the pavement, ignoring red lights, screaming abuse at anyone who raises an objection.”

So that's “cyclists all wear Lycra”, “cyclists ride on the pavement”, “cyclists run red lights” and “cyclists are angry” all crammed into one sentence. A virtuoso moment in terrible journalists writing about cycling, we're sure you will agree.

To his credit, Parsons manages to come up with a new reason to hate cyclists. The “bargain basement Bradley Wiggins” who “nearly killed [his] family” (by, lest we forget, not actually riding his bike into them at all) “had the nerve to be wearing a helmet.”

Chapeau! The usual complaint is that cyclists have no regard for their own safety, so it's a truly inspired to complain about one who does.

Parsons then goes off on the political rant he actually wants to write , but not before dropping in this gem: “It would be illuminating to learn how many pedestrians are crippled or killed by cyclists every year.”

It would indeed be illuminating, because the answer is 'almost none', as even the tiniest bit of Googling would have revealed. Maybe Tony doesn't like Google either - we'll do the legwork for him. Last year according to the DfT's road casualty statistics (it's on page 133 Tony) two pedestrians were killed in single incident collisions with bicycles and 99 seriously injured - the figure includes collisions on pavements. That's two deaths and 99 serious injuries too many but as a comparison 393 pedestrians were killed by motor vehicles last year and 4947 seriously injured..

Of course, if he'd had any facts, Parsons wouldn't have been able to lead into the terrible journalist's favourite cliché, that cyclists are all self-important: “The numbers must be mounting up – especially as cyclists become puffed up with post-Olympic self-importance.”

Glorious that isn't it? As a result of a few elite riders doing well, cyclists must have all started running down pedestrians.

Parsons wraps up with a final link between Mitchell's hissy fit and cyclists. “When he screamed swear words at innocent men and women from behind his little bike, he summed up everything that stinks about all those lousy cyclists.”

A nice combination of 'cyclists are angry' and 'cyclists are entitled' there, which is pretty remarkable coming from a man who was hired by Piers Morgan and whose job it is to be angry. But the plank in their own eye is always invisible to terrible journalists when they get desperate to fill this week's column and decide it's open season on cyclists.