Argon 18 is a bike company based in Montreal, Canada and might easily be overshadowed by that other big export from the same country (Cervelo, in case you're guessing). But Argon have been quietly producing really well designed and engineered road bikes and the brand new Gallium Pro is their latest top-end racing bike.

Integration was one of the trends we identified at Eurobike. We're starting to see a lot more companies use this approach in the design philosophy and Argon 18 have designed the new Gallium Pro's frame, one-piece fork and seatpost together from the outset to complement each other. 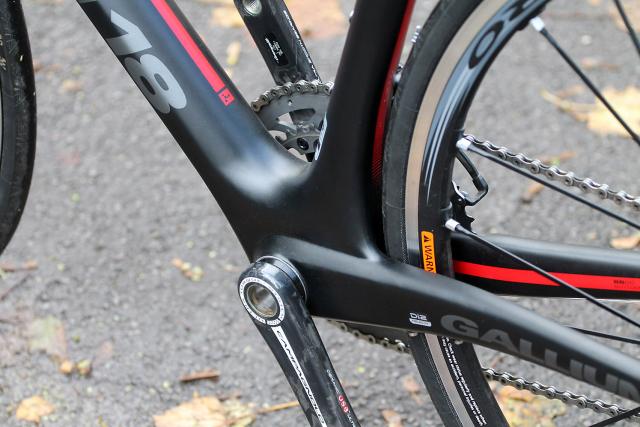 In designing the Gallium Pro the engineers developed something they call Horizontal Dual System (HDS). By drawing an imaginary diagonal line from the top of the head tube to the rear dropout, they separate the two halves of the frame. The lower part is the 'power zone' while above the line is the 'comfort zone'. 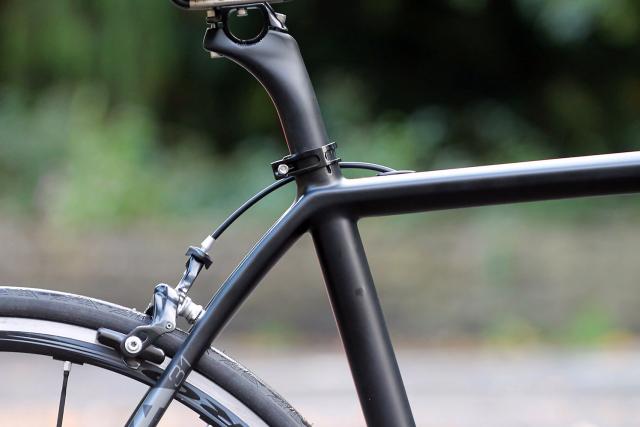 To give the frame the required stiffness everything on the bottom half of the frame is massively oversized. There's a BB86 bottom bracket, asymmetrical chainstays and a huge diameter down tube. Meanwhile, to balance this stiffness with the need for some comfort, the top half of the frame is made from smaller diameter tubes to absorb vibrations and shocks generated by riding over rough roads. 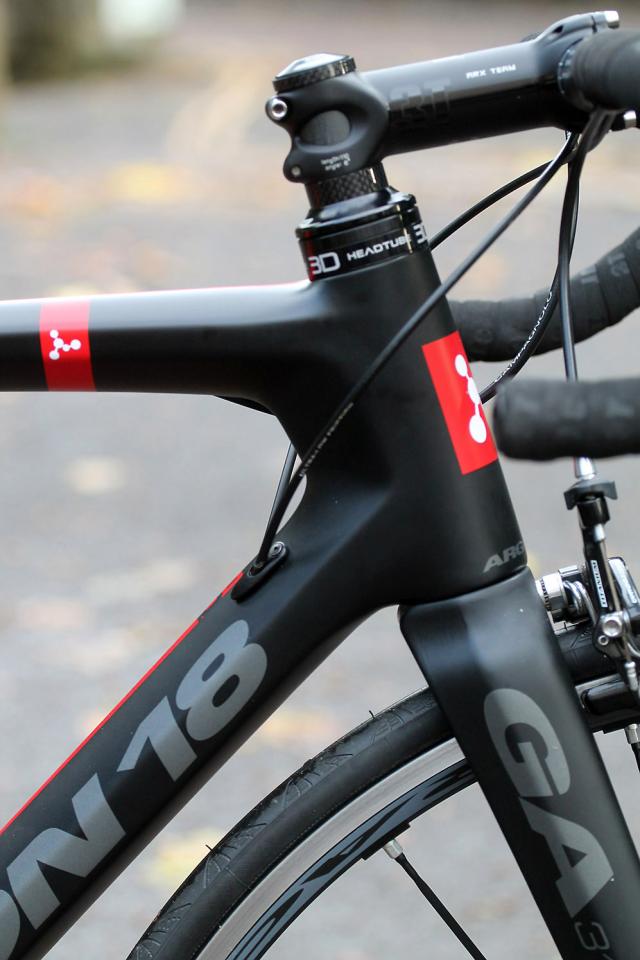 Looking over the bike it's clear Argon don't follow the herd, with evidence of some interesting design solutions. Take the 3D Headtube system, for example, which uses threaded inserts to extend the height of the handlebars without using conventional headset spacers.

The really neat trick is that the upper headset bearing is raised or lowered, as you effectively increase the height of the head tube, so the amount of unsupported steerer tube is minimised. This should lead to a stiffer front end and sharper steering. Tthey claim it's 5% stiffer than using 15mm of headset spacers. You can choose from three head tube lengths - 13.9, 15.3 and 16.3cm - on the 56cm sample we have. 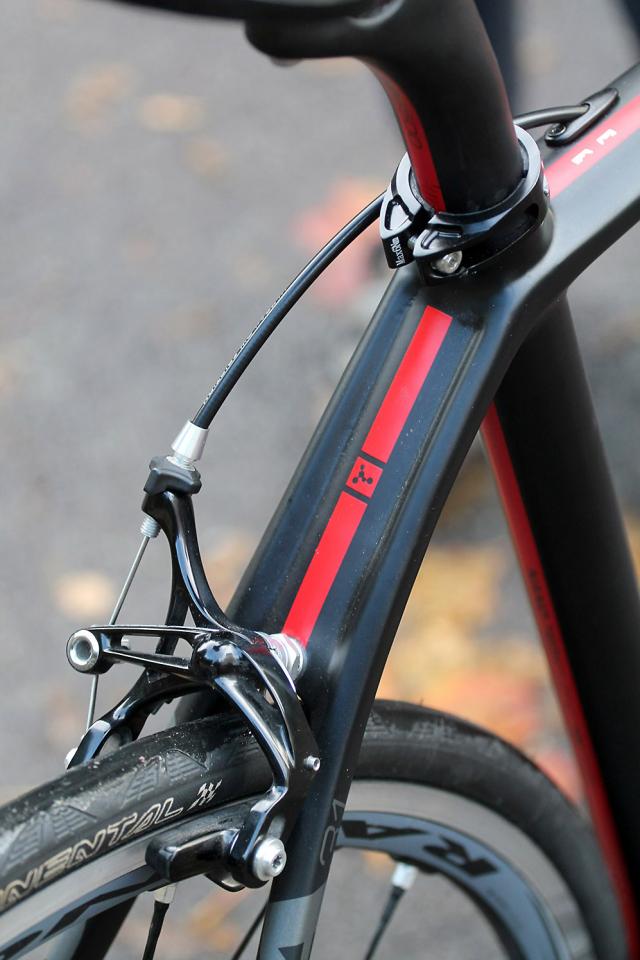 The Gallium Pro is made form 7000 high-modulus Nano-Tech carbon fibre in a monocoque construction. The geometry differs slightly from the norm with Argon giving the Gallium Pro a low bottom bracket and shorter head tube. The frame weight for a medium size is a claimed 920g, putting it right in the mix among the lightweights. Argon's own Ga 31 Pro monocoque fork weighs 340g and their own ASP-6500 seatpost is 226g. 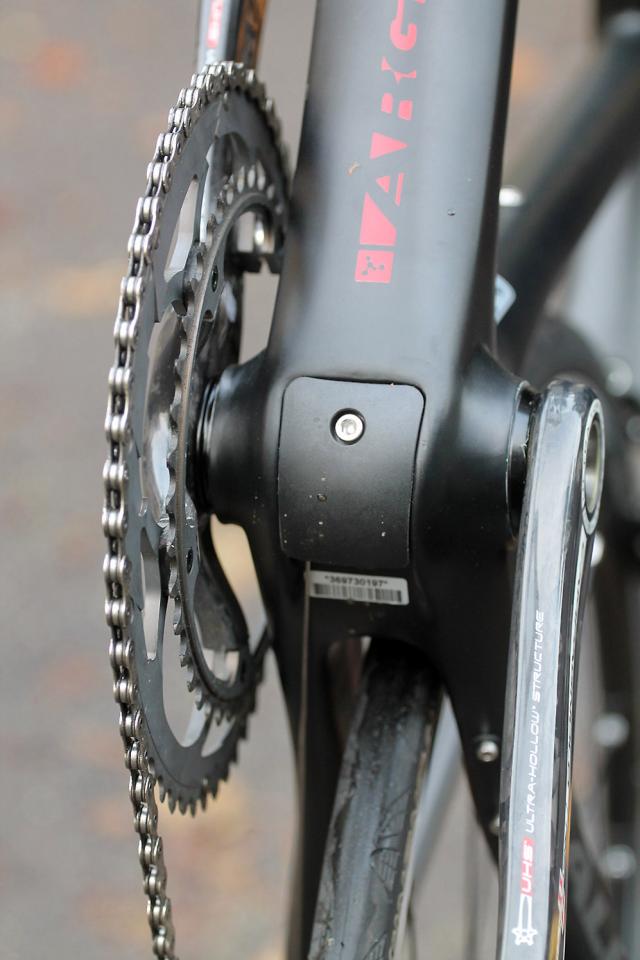 The frame is compatible with electronic and mechanical groupsets with some smart internal cable routing. Our test bike is fitted with a Campagnolo Record 11-speed mechanical group, Fulcrum Racing Zero wheels, a 3T bar and stem and a Prologo Nago Evo saddle. In that build it weighs 6.79kg (14.9lb) without pedals. The UCI's minimum bike weight limit for racing is 6.8kg.

The Gallium Pro frameset is £1,999.99. We'll work out a price for the complete build as we have it by the time we post our review.

We've tested the more affordable Kypton in the past and found it a solid, stable and comfortbale bike, so we're expecting good things from the Galium Pro.